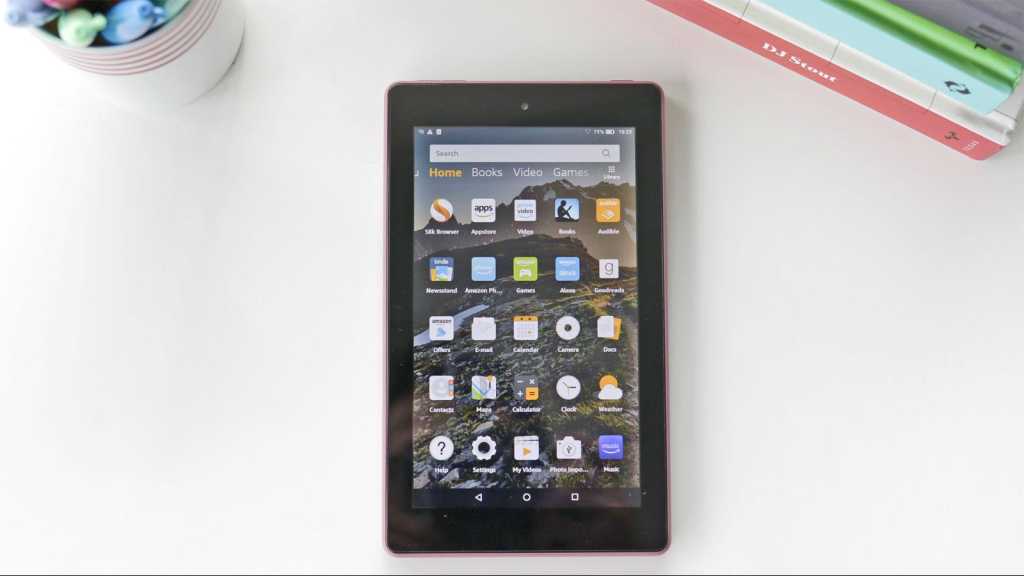 With a better selfie camera and more storage the 2019 Fire 7 is improved, albeit only slightly. And you can’t really expect any more at this price.

These days, we’re wise to Amazon’s “all-new” claims about its latest Fire tablets. But it doesn’t take an expert to see that the 2019 Fire 7 isn’t all new. No, it’s basically the same as the previous generation which arrived in 2017 with a couple of tweaks here and there, and a new palette of colours which make it feel slightly more grown up.

That was a shockingly low price when the first Fire 7 was released, and even now it’s still by far the most affordable big-brand tablet out there. Just remember that it isn’t an Android tablet, so you won’t find the Google Play store or Google Maps: there’s an Amazon equivalent for those and everything else.

You get 16GB of storage as standard now, but you can have 32GB for £10 / $20 more. As always, you’ll get lock-screen adverts unless you opt for ‘Without Special Offers’ when choosing your options before buying. Doing that adds another £10 / $15 to the price. 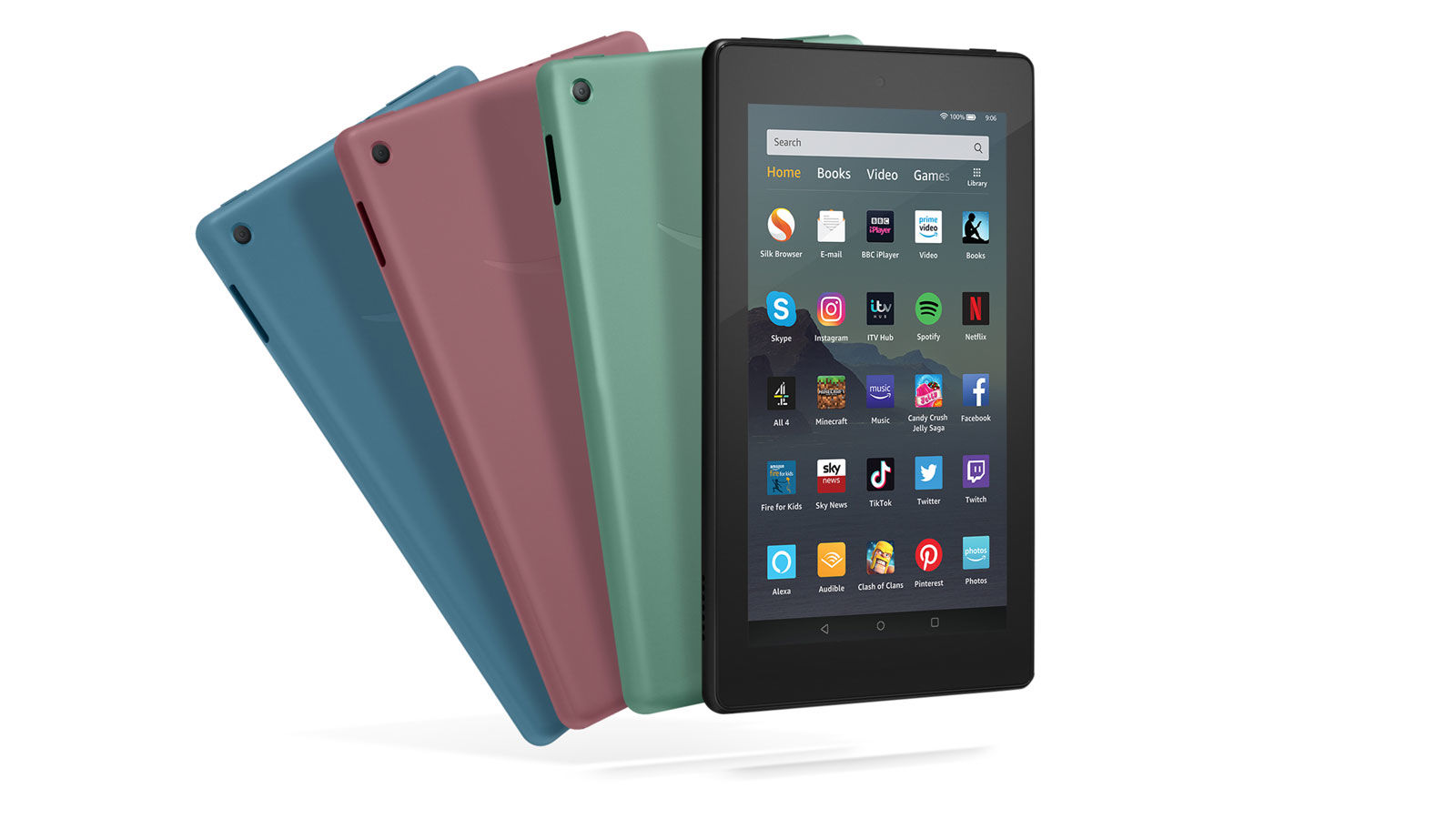 If you’re buying the Fire 7 for a younger child – under 6 or so – then you might prefer to get the Kids Edition version. It’s the same tablet, albeit with no 32GB storage option, but it comes with a chunky bumper case that should protect it from rough handling and drops. And if it doesn’t, the two-year warranty covers accidental damage so you’ll get a replacement. 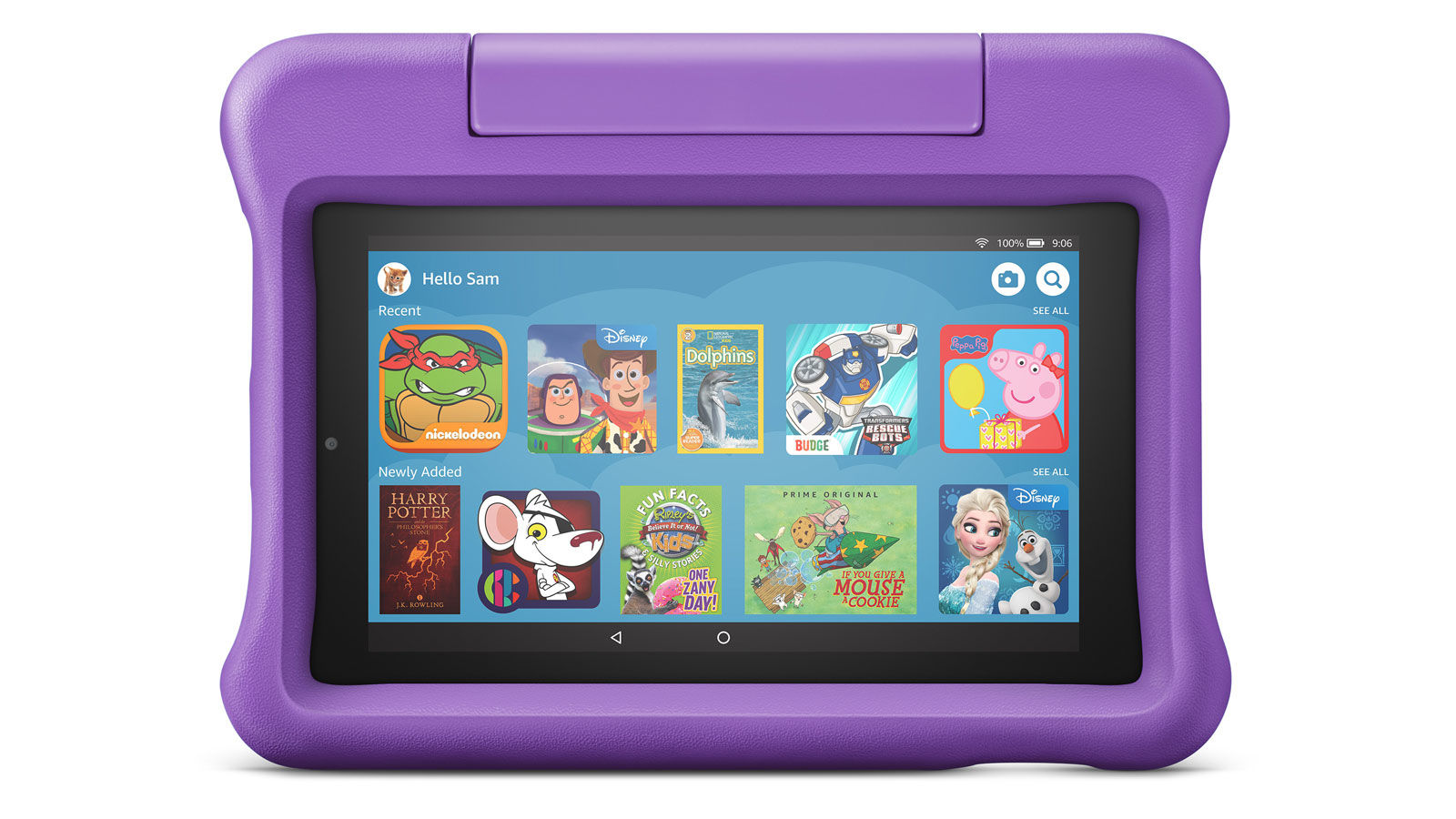 Better still, you get a year’s access to Fire for Kids Unlimited which is a bit like Netflix but for apps, games, books, audiobooks and – yes – videos. All tailored to kids at various ages, so there’s something for everyone.

The Kids Edition costs twice as much, but it’s still a saving over buying the subscription and case separately, while the warranty can be considered a very cheap insurance policy that lasts two years. View it here on Amazon’s website.

If this is your first Fire 7, you might be surprised by the chunky bezels around the screen which are more 2014 than 2019, but they do at least provide something to hold onto without accidentally touching the screen all the time.

Most ports and all buttons are on the top edge: power, volume and a standard headphone connector. On the right side is a flap which hides the microSD slot. 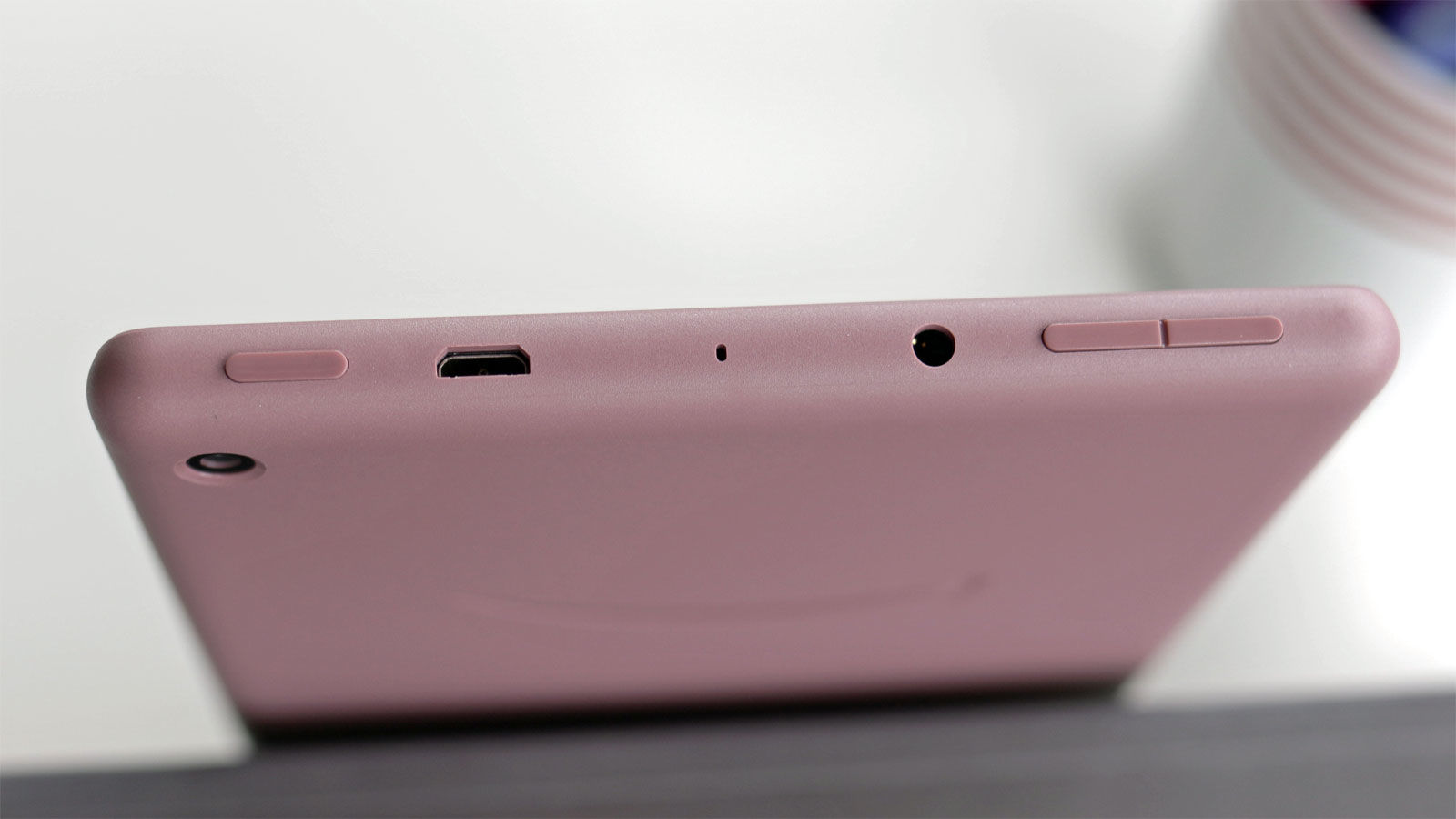 You can now add microSD cards up to 512GB, but it doesn’t really make sense to spend more than the value of the tablet on extra storage.

At the top of the screen is an upgraded selfie camera, and this has meant a jump from ‘awful’ to just ‘mediocre’ selfies. It’s a slight benefit for anyone video chatting with you, but obviously you won’t see that yourself.

The screen is unchanged: it’s a 7in IPS panel with a low resolution of 1024×600 pixels. It’s a shame you can’t have a higher resolution, but inevitably there are compromises to still hit this price with 16GB of storage (the old model had 8GB).

You get Bluetooth, dual-band Wi-Fi and hands-free Alexa, built if that sounds like a new feature, a software update added the latter to the previous generation of Fire 7.

Amazon says that the processor is faster, but the specifications list a quad-core 1.3GHz chip, just as with the previous model. And in general use we didn’t notice any differences: apps still take a little while to load, as do web pages. There’s a predictable stutter when scrolling down through pages, a noticeable wait for the screen to rotate and sometimes a delay when typing.

Clearly this is the best performance you can get for $50, and we’ve not yet heard a child complain about it. So it isn’t really a big deal. 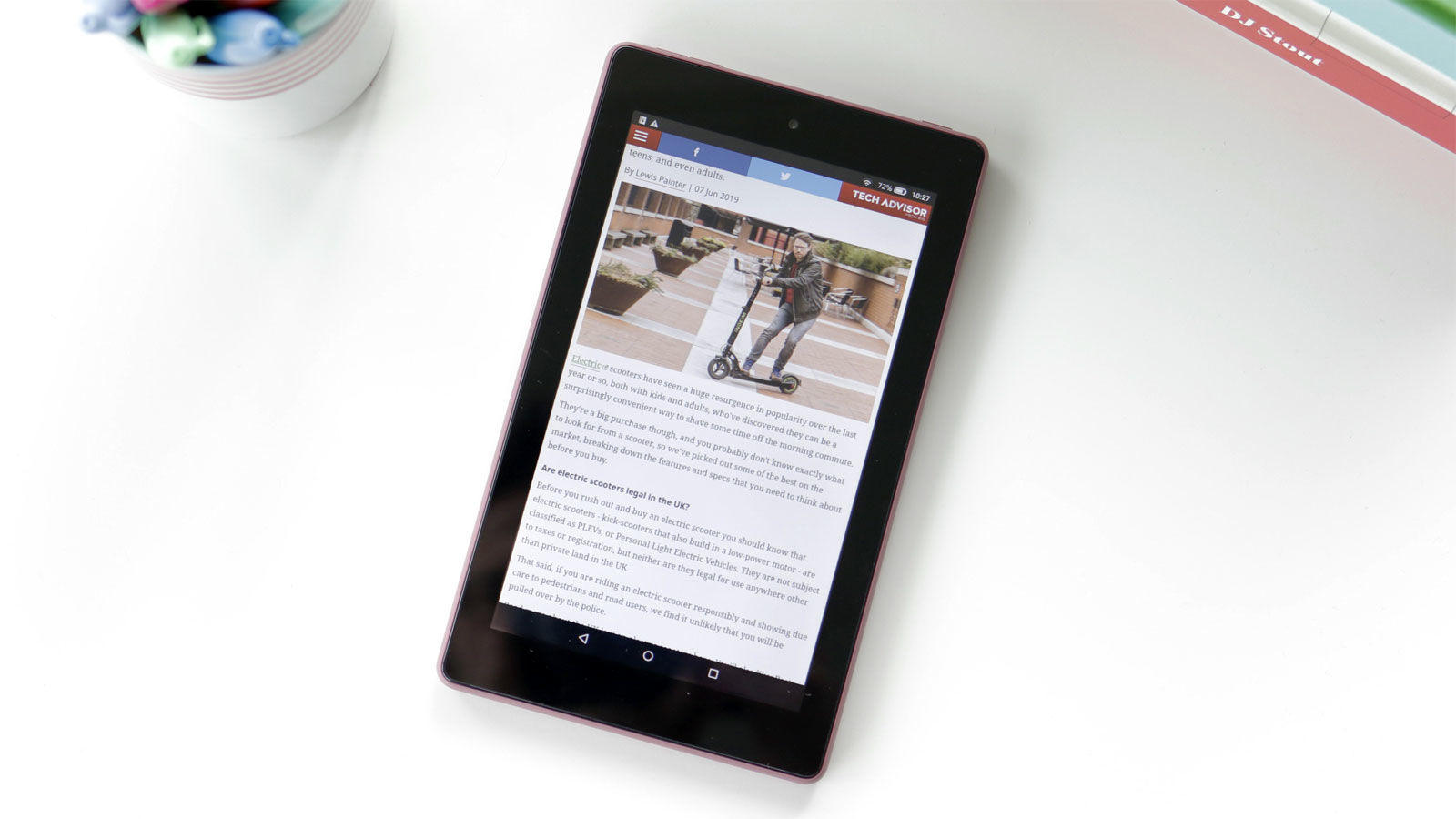 Battery life is claimed to be up to seven hours for this generation, down from eight. We assume this is due to the faster processor, or perhaps a slightly smaller battery capacity, which is something Amazon doesn’t talk about.

That seven hours is definitely attainable, and it’s more than adequate when, again, considering that low price.

Amazon’s FireOS is subtly improving with each update, and it’s easy to use. The Fire for Kids app is present even if you don’t buy the Kids Edition, and this little gem is perfect for younger children as it presents only the content you want them to have access too, and prevents access to the stuff you don’t, such as the Silk web browser and the Appstore. 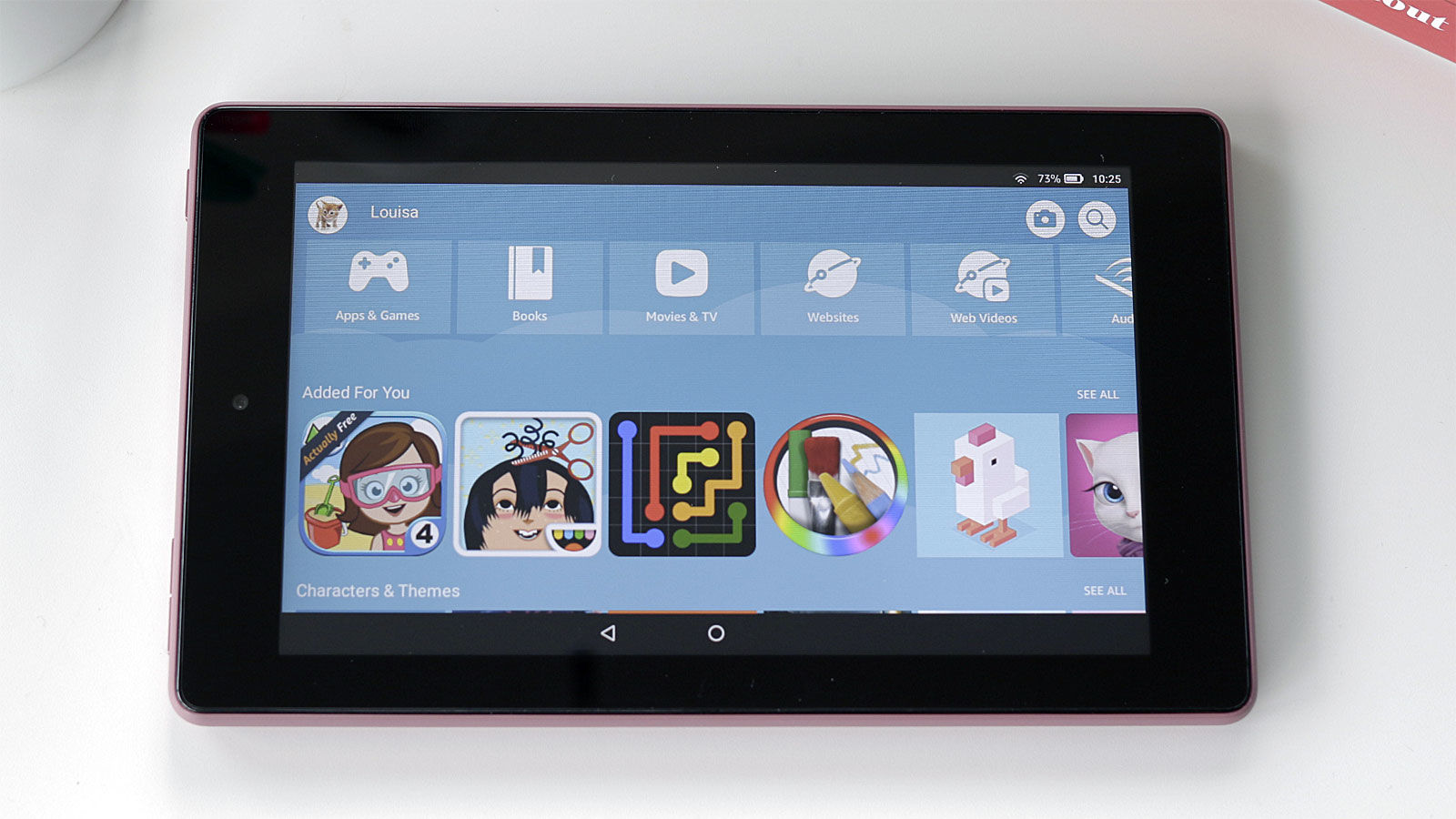 It can also limit screen time for, say, games, while allowing unlimited reading, which is especially handy if you can’t – or won’t – supervise your kids while they use their tablet.

FireOS is very much a portal for Amazon’s content as you would expect. So the Kindle app (called Books) is pre-installed along with Audible and there’s easy access to Amazon Prime Video and Music.

You’ll find Shop in the menu that scrolls across the top, which makes it simple to buy physical products from Amazon. 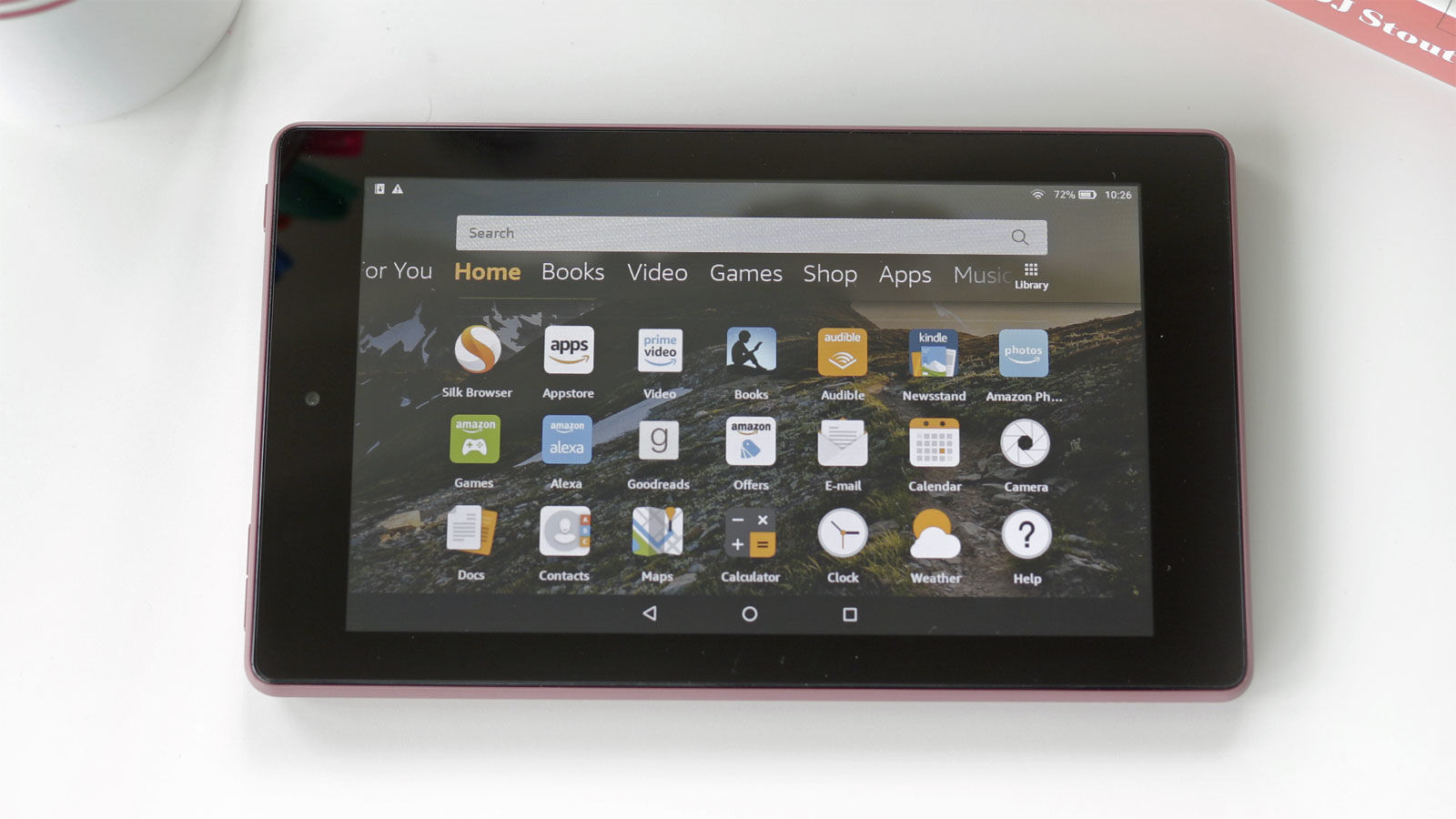 As we’ve already said, you can’t install Google apps, but you can access some of them via the web browser, such as YouTube, Google Maps and Gmail. It isn’t massively convenient, but it’s a workaround. And the good news is that the official YouTube app is going to be available via the Amazon Appstore later this summer.

And Amazon’s own email and mapping apps are fine to use: little updates such as the ability to see live traffic information makes them more useful.

Though you won’t find every last app, virtually everything you (or your kids) want is there, including Facebook, Instagram, Minecraft, Roblox, TikTok, iPlayer, Skype, Netflix and more.

But it is irritating when some of the big hitters aren’t listed in the results, such as the ever-popular Snapchat. 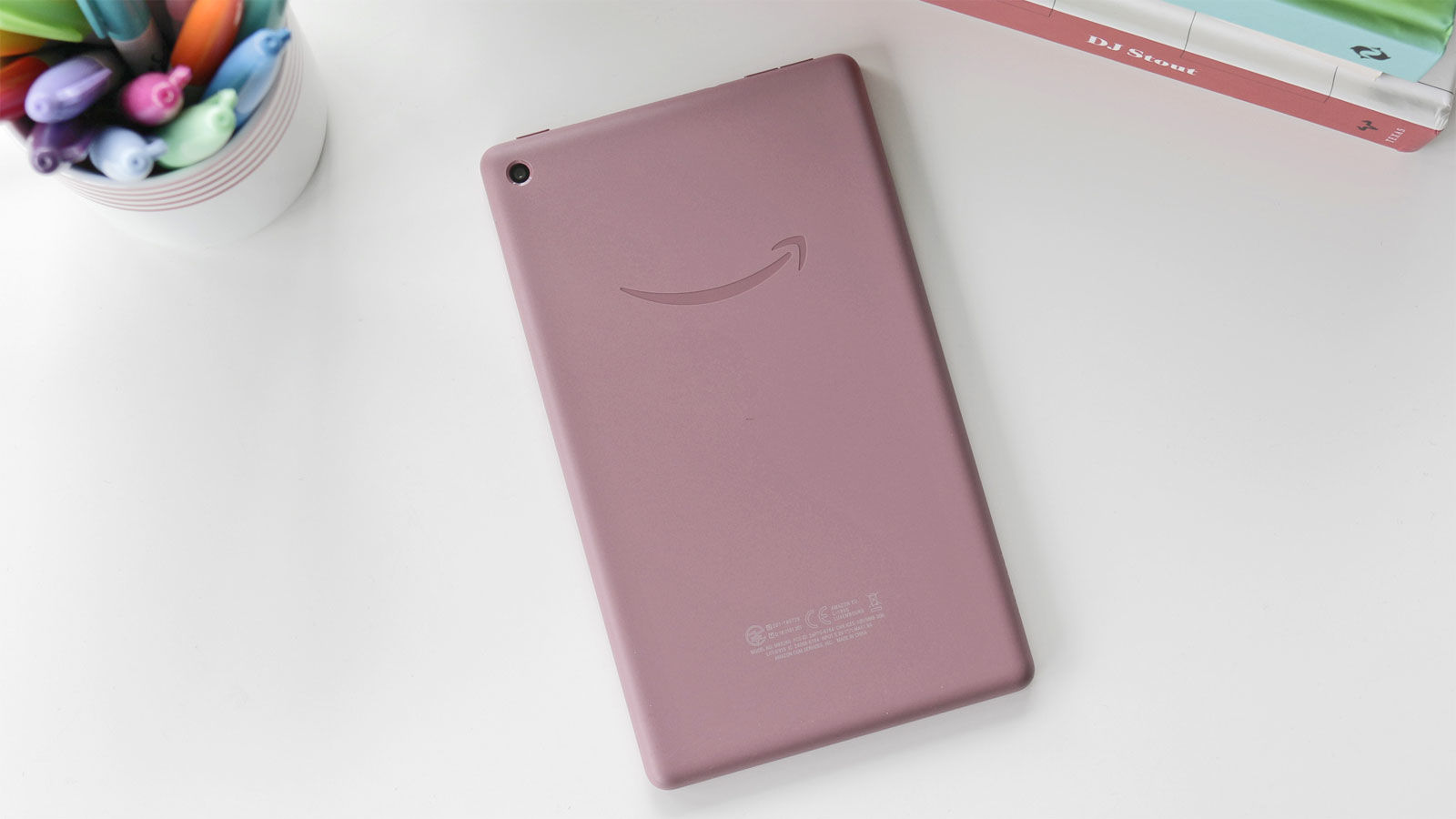 Ultimately, Amazon hasn’t messed with a winning formula here. The simple upgrade from the base 8- to 16GB is very useful as it means you can have enough apps installed without constantly seeing the ‘Storage full’ error, or finding that apps have been uninstalled automatically to save space. It’s worth going for the 32GB version if you can afford to, as 16GB will still fill up quickly.

The new colours seem to be aimed more at adults than kids, but it’s hard to recommend the Fire 7 as a serious entertainment tablet for grown-ups (or your granny). The small, low-resolution screen and impotent processor will make you wish you’d spent more. But for kids, it’s ideal and still great value.