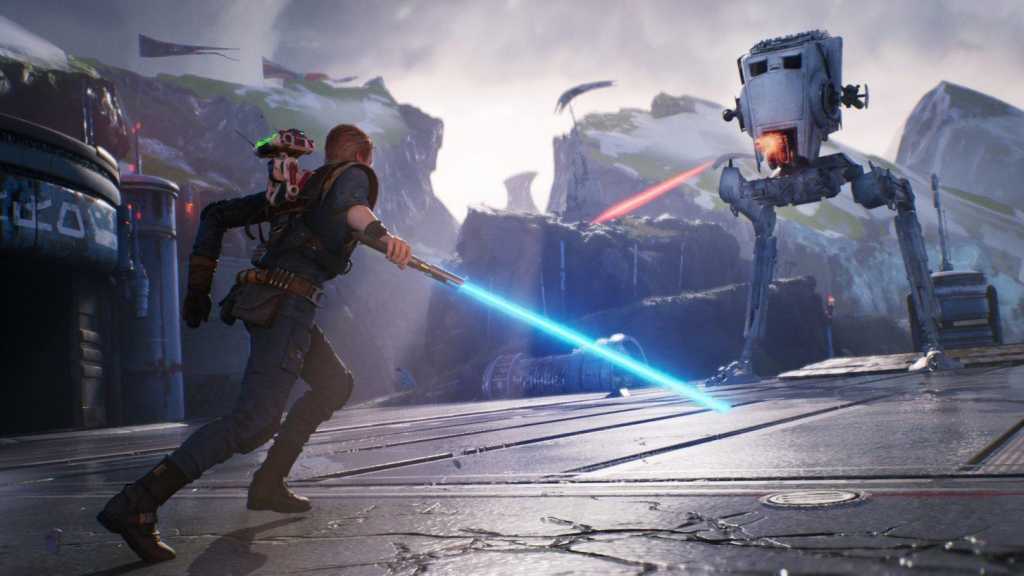 It means Fallen Order feels functional rather than fantastic. It’s a good but not great game that never really bothers even trying to be original, instead coasting by on the strength of its source material. But it treats that source material with such open love and affection that Star Wars fans will struggle not to get carried along on the ride, though those who aren’t strong with the Force can probably get away with steering clear.

It’s one of the great gaming mysteries of our time – since EA took over the Star Wars videogame licence, despite multiple attempts, it has until now failed to release a big-budget single-player game in that universe. Jedi: Fallen Order finally fixes that.

From developer Respawn – best known for the Titanfall series and the battle royale smash, Apex Legends – Fallen Order blends the cinematic set piece platforming of Uncharted with the challenging dodge-counter-parry melee combat of Souls games, as you fight your way through a Star Wars universe still reeling from the impact of Order 66 – the command that killed the Jedi.

The game is out now on PS4, Xbox One, and PC. You can order it now from Amazon, or any of the usual retailers.

What seemed like one of the most promising aspects of this game before we even got to play it, was learning that it is considered official Star Wars canon.

Slotting in somewhere between the events of Episode III: Revenge of the Sith (where the execution of Order 66 takes place) and Rogue One: A Star Wars Story, this stamp of approval implies that extra care and attention has been paid to the game’s development, both from an in-universe narrative perspective and from a technical and gameplay point of view.

It’s there in every carefully tuned hum of a lightsaber – subtly different depending on your choice of blade colour – through to the supporting cast (including a couple familiar faces), nods to the extended canon like TV show The Clone Wars, and even a late game reveal that’s a tantalising hint at one of the minor mysteries of The Force Awakens.

It’s clear from the outset – a carefully crafted cinematic set piece across a rainswept spaceship scrapyard – that this game is a major labour of love for the franchise, throwing you into the space shoes of former Jedi padawan Cal Kestis on a mission to re-build the order in the wake of the Empire’s rise.

As much as the license is pumped to its potential, it’s a shame that the actual story here isn’t put to such good use. A phenomenal finale aside, the plot mostly devolves into a galaxy-spanning fetch quest, and the weight of existing canon stops it from ever doing anything too interesting to the universe at large.

It doesn’t help that Cal is an unspeakably dull lead, and while other characters pick up some slack – his affable droid BD-1 is the categorical highlight – the dialogue and character development are rarely better than bland.

The ‘levels’ of the game take the form of different planets, consisting of both familiar locations – like the forest-covered Wookiee homeworld of Kashyyyk – and completely new worlds, built specifically for this game’s story, such as the windswept tomb-filled planet of Zeffo, where you’ll spend most of your time.

While lightsaber combat lies at the heart of Fallen Order’s gameplay, exploration is a huge component too. Through a blend of environmental storytelling, psychometry (or Sense Echo) and the ability to scan the various fauna and objects you encounter, you piece together both the Empire’s effect on the universe following the events of Order 66, as well as Cal’s personal journey from Padawan to fully-fledged Jedi.

In classic Metroidvania style the game encourages you to revisit each world throughout the story, unlocking new paths as you gain new abilities and tools to explore. Some of that backtracking is story-driven, but more is simply for those keen on collectibles – though these are broadly limited to cosmetic upgrades, with customisation options for Cal, BD-1, their ship the Mantis, and the lightsaber (with an almost overwhelming number of options here).

Mastering the geography of each world is plenty fun, helped by the fact that the game borrows liberally from the Uncharted approach to traversal, and it shares those games’ blockbuster bluster and scale too, with TIE fighters spinning through the air and explosions all over.

There’s puzzle solving too, and while some are simple – force pushing bridges, freezing giant spinning fans – others pose a real challenge, with some unexpectedly intricate environmental puzzles packed into Zeffo’s colossal tombs in particular.

Variety mainly comes from each planet’s unique biomes and creatures – many of which you may find yourself in combat with, if you’re not careful. There’s a distinct feel to each world, and they’re all rendered in vivid detail. Sadly the game’s mapping system is not so detailed, and you’ll likely have to master the layouts yourself to some extent, because the featureless blue labyrinths provided by the in-game holomap are distinctly unhelpful.

Dotted around each stage are various meditation points, which you use to save, level up, and heal – at the cost of resetting all the local enemies, in a mechanic lifted directly from Dark Souls. It works well enough, but with no thematic fit to the Star Wars universe it feels more shameless than most of the other clear influences on Fallen Order, and it’s hard not to feel that a more randomised respawn mechanic would have suited both the mechanics and the lore much better.

Graphically speaking, Fallen Order (running in Unreal Engine 4) looks slick enough to justify those cinematic aspirations, though we have our hesitations too. Faces and other animations are slick and fluid, but some environmental effects, like water, not to mention some character animations, lack a little polish.

When it comes to lightsaber combat – arguably the heart of the game – Respawn has nailed the look, sound and feel of the franchise’s signature laser sword. Combat borrows from the rhythm of Souls games, with an emphasis on dodges, counters and parries; perfect timing keeping you safe from harm and maximising your damage output.

Parry timing is the main thing adjusted across the four difficulty modes, but even on the ‘recommended’ Jedi Knight mode (the second of the four) things are very tough. This is partly where those occasionally ropey animations become a problem, as judging the parry window is often surprisingly tricky, and even late in the game some missed parries felt unfair rather than earned – though maybe I’m just not very good.

The other complicating factor is that it’s not all melee and plenty of Cal’s Stormtrooper opponents keep their distance to pummel you with blaster fire while others – including the new Purge Troopers, trained to fight Jedi – will get up in your business. That means you have to keep track of multiple opponents and types of attack, using your lightsaber to deflect laser blasts as much as block melee strikes.

Fights feel fast-paced for the most part, although bumps do arise when handling crowds of ‘troopers invading your personal space or when trying to juggle both close-range and distant attackers at the same time. The Assassin’s Creed series handles the former better, although the addition of force powers – especially force pull – even the playing field somewhat.

For a padawan, Cal seems surprisingly proficient in the Force, letting you use your Jedi magic to freeze enemies in place, yank them towards you and more – though you’re strictly limited to ‘light side’ powers, so don’t get your hopes up about throwing around any force lightning.

You can expand your force options through the skill tree, which is split roughly into Force, Lightsaber, and Survival, but it’s mostly a question of prioritisation – any completionist player will unlock every ability by the end of the game, so you’ve mostly got to worry about which skills you want to get first, and every players’ Cals will be about the same in the late game, with no scope to craft a truly unique version for yourself.

For the most part, it’s a bloodless battleground but even so, combat feels undeniably gnarly, especially when you execute a potent finishing counter. While you don’t cleave Stormtroopers in two during general gameplay, some cutscenes render lightsaber-sustained injuries with a little more in-universe realism than usual, and the non-human monsters you’ll fight are fair game to get carved up all over the place.

With dynamic combat and stylish set pieces that live up to Star Wars’ big screen heritage, Fallen Order is the best single-player Star Wars title in years, if not all decade, but to some extent that’s damning it with faint praise.

The lightsaber combat feels phenomenal when it works, though janky parry windows occasionally get in the way, and exploring (then re-exploring) the various planets is rewarding enough. It’s just a shame that with so many mechanics lifted directly from other games this feels more like a greatest hits medley at times than its own thing.

It means Fallen Order feels functional rather than fantastic. It’s a good but not great game that never really bothers even trying to be original, instead coasting by on the strength of its source material. But it treats that source material with such open love and affection that Star Wars fans will struggle not to get carried along on the ride, though those who aren’t strong with the Force can probably get away with steering clear.