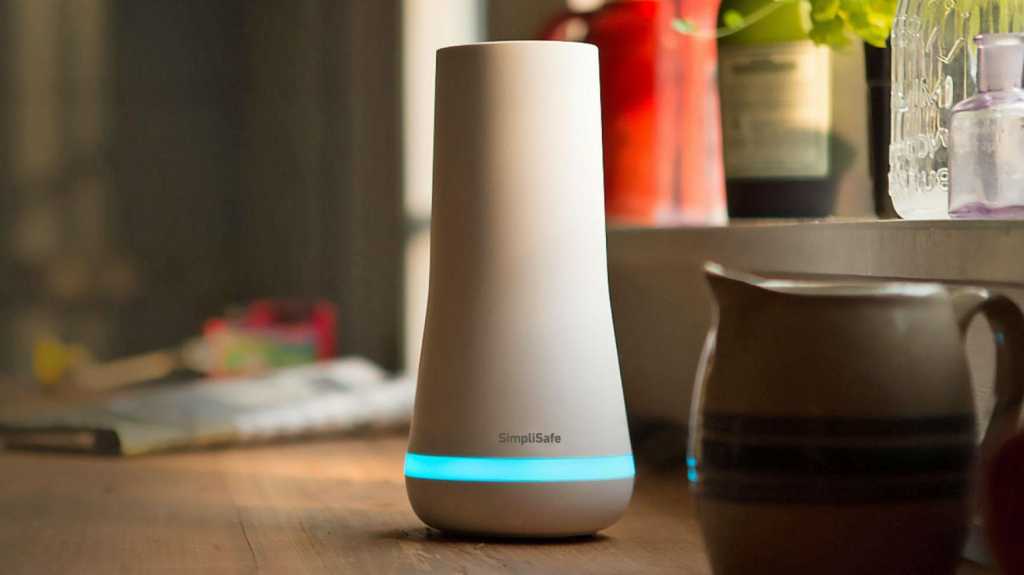 The Simplisafe system couldn’t be easier to self-install, but it does require a monthly subscription which could put some people off. We’d like the option of an external siren, but other than that, it’s a comprehensive smart security system.

Simplisafe has been around in the US for a while now, is now available in the UK. It’s a smart alarm system which can notify you of a potential break-in on your phone, as well as a whole lot more.

With two subscription tiers, you get professional 24/7 monitoring which means you and your designated contacts will be called and notified should the alarm be triggered. Go for the higher tier and a guard will be dispatched to check your home for signs of a break-in, and if there’s evidence that intruders are in your property, the police will be called as well.

Plus, there are sensors which can detect floods, fires as well as freezing temperatures, making this a well-rounded security system.

As with all alarm systems, the total price will depend on the size of your home and the number of sensors required.

The £279 Starter kit (called The Foundation in the US and which costs $229) includes the base station, keypad, a door / window sensor, a motion sensor and a camera.

For anything other than a small flat, you’ll need more than that and there are various kits – which don’t have direct equivalents in the US – from  The Essentials at £309 right up the Bamburgh for £504 which should be fit for those who live in a castle. Not the Bamburgh castle, mind.

In reality, you’re probably best off using the  Build My System option that allows you to specify which sensors you want.

For an average UK home, the total will come to around £500 if you want five entry sensors (these protect both doors and windows), a motion sensor, a glass break sensor a couple of key fobs and an extra camera.

You might also want a panic button, which silently triggers the alarm, for £19.99.

The basic elements of the kit include the base station, keypad and a camera. The base station looks and works a little like a curvier Amazon Echo. It doubles as the siren, but also announces with a nice British voice when the system is armed and disarmed.

You can connect it your router via Wi-Fi, but there’s a SIM inside as a backup in case your broadband goes down, and there’s an eight-hour backup battery in case of a power cut.

It’s available in black or white, just as is the keypad. This, like all the other components bar the camera, is completely wireless and runs on battery power. It’s nice and compact and lights up when you touch any part of it, which is great in the dark. It has an LCD display and menu system that’s navigated by pressing the outer edges of the screen.

There are three buttons: Home, Away and Off. The only time you need to enter the PIN code is to disarm the system, but this can be avoided if you buy one or more of the optional key fobs. These work like a car’s fob and have the same three buttons, so you can disarm the alarm before you even get out of your car as you arrive home.

The range of extra sensors and components is slightly more limited than in the US. For example, the video doorbell isn’t available on these shores.

One oddity is that there’s no external siren, as you can get with Honeywell’s evohome security. You can buy an ‘extra’ siren for £59.99 but this is really designed for indoor use and although you can technically mount it outdoors under the eaves, it doesn’t look like a traditional bell box which would deter a potential burglar.

Instead, Simplisafe bundles a garden stake kit with a 6x6in ‘yard sign’. This is the accepted norm in the US, but not in the UK. We’re told the firm is considering an external siren at the moment.

Last but not least is the Simplisafe camera. This only comes in black and runs from mains power. It’s a relatively standard Wi-Fi security camera which is needed so the monitoring company has visual verification that there is indeed an intruder in your home. That’s why you get one with every Simplisafe package.

When your kit arrives, everything is pre-paired with the base station and keypad so all you have to do is unpack everything, remove the tab that stops the batteries running down and the backing from the sticky pads before pressing the sensors into position.

The entry sensors are particularly good, as they don’t have to be mounted in a specific orientation. Either part can be attached to the moving part (i.e. the door or window) and the other part attached to the frame.

It doesn’t matter if the two parts aren’t aligned: we found the sensors still worked fine even though the door sat 10mm proud of its surround. A blue LED flashes to indicate the sensor has been triggered, and you can choose whether or not the base station chimes at the same time.

You can check everything is working as intended by enabling a test mode on the keypad. Then, the base station will announce which sensor has been triggered as you go round setting them off. A simple handclap will trigger the glassbreak sensor, but in normal use it’s designed to ignore such false alarms, and shouldn’t go off even if you smash a plate: only the sound of breaking glass will trigger it.

Motion sensors are designed to be stuck on a wall around 2 metres from the ground and shouldn’t be set off by pets.

The range of these sensors is very good: we attached an entry sensor to a garden shed some 85 feet from the base station (with three sets of doors in between) and had no connectivity problems.

Battery life for all sensors is 3-5 years, and the AA batteries in the keypad should last around a year.

When you order your Simplisafe system in the UK you must choose between two subscriptions: Pro or Pro Premium. The former costs £12.99 per month and the latter £19.99.

You can opt to skip the subscription and buy the system anyway, but without one it will lack most of its features and offer no alerts, no access to the camera’s feed nor any monitoring. In short, it will work as a traditional, disconnected alarm which will merely sound the siren(s) if it’s triggered, so makes no sense.

The Pro tier gives you 24/7 monitoring by Securitas, who will call you if a sensor is triggered. If you don’t answer, they’ll go through the list of secondary contacts until someone answers, but if no-one does, they will simply cancel the alarm.

This subscription also enables the cellular connection, which will be used if your broadband isn’t available for whatever reason, and includes environmental monitoring – alerts from the freeze, smoke or water sensors.

It’s only when you sign up for the Pro Premium that you additionally get police dispatch, but as mentioned, that will happen only if Securitas is able to access your camera’s feed and see that there is an intruder in your home. If the camera doesn’t show anything, Securitas will instead call you and your designated contacts to inform you of the alarm.

For privacy, Securitas can only view footage from your camera for the 15 minutes surrounding the alarm being triggered.

Strangely, it’s only with this top tier that you can use the companion Simplisafe app. This gives you instant alerts when a sensor is triggered and lets you view the feed and recorded clips from your camera(s). These are captured when motion is detected, and are also stored in the cloud for 30 days.

The app replicates the functions of the keypad so you can change settings such as the volume of the voice on the base station, how long the siren sounds for when the alarm is triggered and more.

You can also see the status of all sensors, plus any warnings.

Although it’s not as convenient as the keyfob, you can use the app to remotely arm or disarm the system. That could potentially be useful if you forget to arm it and drive away, since you can control the system anywhere you have an internet connection.

During our month of testing, the system ran flawlessly. Thanks to an errantly placed motion sensor (we left it on a windowsill) we were treated to a call from Securitas after a cat had triggered it by walking directly in front of it.

This proved a handy test of the monitoring, which also informed us that the camera feed was unavailable which, in turn, meant that it wasn’t possible to verify an intruder was present and therefore the police would not be dispatched.

The only way you or a secondary contact can prevent the police from being called is to say the ‘safe’ word which you enter along with your address and contact details when first setting up the system.

Simplisafe is a great security system because it works well, is easy to install and use and offers that extra peace of mind from being constantly monitored. There are no contracts to tie you in, but this is a moot point because the system doesn’t really do anything if you’re not paying a subscription.

Therefore it’s not ideal for DIYers who want to save money by self-installing: it’s for people who want a monitored system that will keep your property safe even if you can’t keep an eye on it yourself.

If you don’t want to pay a subscription, you’ll pay a similar amount for rival smart systems which let you access and mange them from an app.