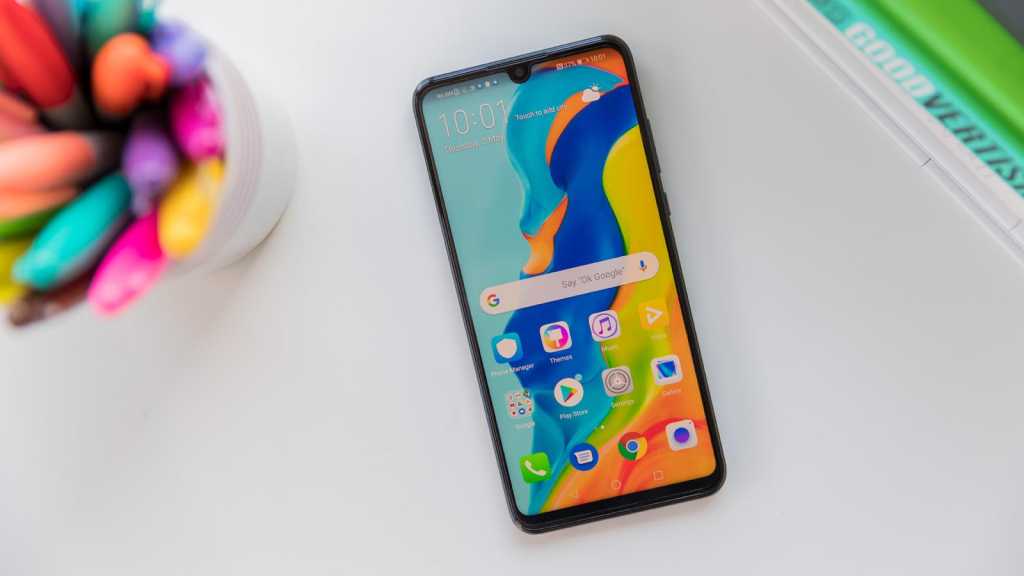 The P30 Lite is an attractive phone with decent cameras at an affordable price. However, it falls down in other areas which are important. Most notably performance and battery life.

Huawei might be in a spot of bother when it comes to its mobile business, but it doesn’t affect phones that have already launched. So the P30 Lite is still an option, especially if you can’t afford the flagship models. Find out more in our full review.

As per usual the Lite edition of Huawei’s 2019 series is the mid-range option. It’s got some great features, especially if photography is important, but there are some downgrades such as a lack of waterproofing and a lower grade processor.

Following the initial release of the P30 Lite in 2019, Huawei has launched a new version for 2020. It’s called, impressively, the ‘ P30 Lite New Edition‘.

The good news is that it’s cheaper than the original at £299 instead of £329 and you can buy it from Carphone Warehouse. You can still get the older model from the likes of  Amazon and Argos for around £229.

It’s not just a name as the P30 Lite New Edition comes with 6GB of RAM instead of 4GB. It also has 256GB of storage which is double the amount. Note that our review below is based on the original model.

Rivals include the Pixel 3a,  Xiaomi Pocophone F1 and  Honor 20 Lite. Check out our chart of the best mid-rang phones.

Huawei phones aren’t always available in the US, but the P30 Lite (older version) is available on Amazon for $269.

The P30 Lite is a pretty typical smartphone in 2019 when it comes to design and build. So it’s sleek, shiny and slippery.

Like many mid-range phones, it’s not immediately obvious that the device is the price that it is. Generally it looks very similar to the flagship P30 models with only small details giving away the game such as a rear fingerprint scanner.

Other things are hidden such as the lack of any waterproofing which is a typical thing to go in order to save money.

We looked at the Midnight Black model which is fairly plain, as is the Pearl White option. You’ll want the Peacock Blue colour if you want that eye-catching iridescent gradient that Huawei has become known for.

Apart from the lack of waterproofing, we’d say this is very much a flagship phone at the mid-range price in terms of design.

It feels nice to hold thanks to curved 3D glass at the rear and things like small bezels hide the fact this is available at just over £300. There’s even a headphone jack which you get on the P30 but not on the P30 Pro.

Our only real complaint is the fairly large camera bump which also has slightly sharp edges. It makes the phone rock like wonky table when you put it on a flat surface.

Moving onto the hardware itself, the P30 Lite is a mixed bag, like getting someone to choose pick’n’mix sweets for you but they don’t quite know your taste.

Huawei has focused – pun unintended – on the cameras here which is good if photography is important to you. However, downgrades compared to the full fat P30 phones in other areas are, in places, a little worrying.

Let’s start with the main reason to buy the P30 Lite, those shooters.

The P30 Lite is an extremely affordable phone for one with a total of four cameras. Rivals tend to have one or two at the back, but Huawei has gone for a triple lens setup here.

The main sensor here is a whopping 48Mp. It’s the same, we think, as recent devices like the Asus ZenFone 6, Honor 20 and Motorola One Vision. Then there’s an 8Mp ultra wide angle lens) and a 2Mp lens for bokeh depth effect.

It’s worth noting that you don’t actually end up with huge 48Mp photos – well you can if you really want to but you’re better off with the default setting. Here the phone uses ‘pixel-binning’ so you end up with a 12Mp snap for the best quality. As you can see in our samples, the camera takes high-quality shots you wouldn’t normally expect from a mid-range phone.

As you can imagine, the quality drops when you switch to the ultra wide angle lens but it’s still good and it’s handy to have when you simply need to fit more in the shot. There’s no telephoto here, so that third lens is used for depth information.

Like most camera apps, it’ll take you a little while to get used to everything unless you’ve used Huawei phones before. We’re still miffed by HDR being buried in the menu rather than automatic though, so you’ll want to switch that on.

The night mode is decent, although can’t beat Google’s and it’s worth noting that video is limited to Full HD and with no optical image stabilisation.

At the front of the phone, sitting in a teardrop notch, is a 24Mp camera with an f/2.0 aperture. In our tests it does a pretty excellent job of taking sharp selfies.

However, the cost cutting comes in the form of panel technology. Instead of OLED, you get an LCD IPS screen instead. The colours don’t pop in the same way and contrast is a long way off.

This is fairly understandable at the price, though, and if you don’t put it side-by-side with an OLED panel things look pretty good. Brightness is pretty good at a maximum of 350cd/m2, which is plenty to see clearly outdoors.

One thing to bear in mind is that you can get OLED in the mid-range. The Pixel 3a is a good example and Samsung’s Galaxy A50.

As is typical for a mid-range phone, there’s a lower grade processor in the P30 Lite. So instead of the Kirin 980, you get the 710. It’s still an octa-core chip, but with lower clock speeds.

Things also drop from 6- to 4GB of RAM when compared to the flagship P30 models. Storage is decent at 128GB, plus there’s a microSD card slot if you don’t want to put in a second SIM card. Huawei says it can take up to 1TB cards.

Note: The P30 Lite New Edition comes with 6GB of RAM and 256GB of storage.

Although that’s a generous amount of storage, performance is the achilles heal of the P30 Lite. The phone is a little laggy in our usage. It’s a noticeable amount, too, such as a little pause when unlocking the phone (not including the fingerprint scanner), swiping between home screens and waiting for some apps to open.

The benchmark result in Geekbench 4 is pretty good, but the P30 Lite suffers on the graphics side of things. It’s really not ideal, as we thought the days of this kind of lag in the mid-range was over. The fact is, there’s better on offer at similar prices.

The Pixel 3a, for example, or if you want something specifically for gaming then check out the Honor Play and Pocophone F1. Even the cheaper Moto G7 Plus matches up to the P30 Lite In GFX tests.

As we mentioned earlier, the P30 Lite has a headphone jack. It shouldn’t be, but that’s a quite a big win for a phone in 2019.

Not everything is great on the audio front though as there’s just a single speaker which is not much to speak of. You’re better off using headphones – either plugged in or wirelessly taking advantage of the aptX HD codec.

There’s little else to say as you get the usual array of things such as USB-C, dual-band 11ac Wi-Fi, 4G LTE and so on. There’s a fingerprint scanner on the back of the phone.

Like performance, battery life is an area of disappointment. We expect a modern smartphone to last a day of normal usage but the P30 Lite struggles, even with a decent enough 3340mAh capacity.

In our usual Geekbench 4 test which we use for all phone, the P30 Lite only managed five hours and 53 minutes which is a fair way off the pace.

There’s no wireless charging here, of course, but you do get 18W fast charging over USB-C. With the supplied charger we found the phone managed to get from 0- to 38% in a 30 minute period. That’s not bad but rivals can do a little better.

As per usual, Huawei adds its EMUI software skin to Android, 9.0 Pie in this case. And it’s no secret that the user interface is one of our least favourites at Tech Advisor towers.

It’s good if you’re coming from an iPhone since a lot of elements, such as the lack of an app draw, is the same.

However, we much prefer the stock Android available on the Pixel devices and other manufacturers like OnePlus and Motorola keep things almost stock while adding genuinely useful elements.

We find EMUI to look a little dated and confusing, although we still like the rotating wallpaper each time you unlock the phone.

Pre-loaded apps like Amazon and Booking.com should be a thing of the past but the bigger issue is lag. As we mentioned in the performance section, navigating around the OS is not a smooth experience and we think that’s partly down to the software.

Luckily you can install other interfaces, to an extent anyway, but we can only review it as it comes out of the box. And on that front, pretty much every rival is favourable in this department.

Huawei has done a decent job of retaining the attractive design and excellent camera performance of the P30 flagships into a much more affordable phone.

On that basis, the P30 Lite is a decent buy. However, when you compare to some similarly priced rivals there are better options to choose from.

We’re disappointed by the P30 Lite’s lacklustre battery life and laggy performance, which should really be a thing of the past. The display isn’t as good as rivals either.

So we’d recommend checking out the Xiaomi Pocophone F1 and Google Pixel 3a as more well-rounded devices. Or even go cheaper with the Motorola One Vision or Honor 20 Lite.

Note: Our review, verdict and score is based on the original P30 Lite. We will we change these if we can test the P30 Lite New Edition.