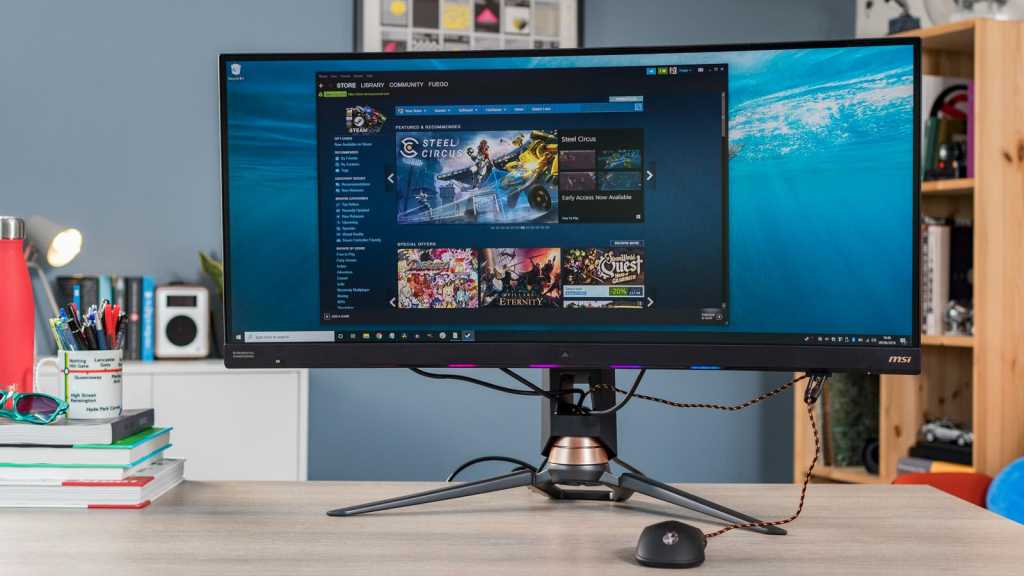 The Optix MPG341CQR is a seriously impressive piece of kit that packs top – or near-top – specs across the board without quite being bank-breaking, rounded out by ‘AI’ features that are genuinely useful. A 34in curved panel, QHD, 144Hz, 1ms response, and great contrast and colour gamut mean this thing is as pretty to look at as almost any display out there – only the 380 nits max brightness lets the side down ever so slightly.

New monitors are rarely too exciting except for the die hard enthusiasts. A few extra inches here, an improved contrast ratio there – the numbers go up, but it’s rarely enough to get you hot under the collar.

Things are a little different with the MSI Optix MPG341CQR. Yup, the name’s a bit of a mouthful, and it’s got the usual exhaustive (and exhausting) array of specs to run through, but it also has something a bit new: AI features that are actually useful.

MSI announced the new monitor at CES earlier this year, but revealed more about how all the artificial intelligence stuff works at Computex – earning one of our five Best of Computex Awards in the process. Here’s why.

The Optix MPG341CQR isn’t cheap, but for the specs it’s actually fairly good value at £869/$799. If you’re in the US you can grab it right now from Amazon or Newegg, though at the time of writing it’s listed as ‘unavailable’ on Amazon UK and doesn’t appear to be in stock at any other online retailers.

Obviously at almost a grand this is not cheap – even by the standards of the rest of our best gaming monitor chart – but there’s enough packed in here that it must just justify that big ticket price point for you.

Most of the time when you talk about a monitor the focus is firmly on the display’s specs, but here the more interesting stuff is arguably elsewhere. Yes, the display’s great – we’ll get to that – but around it you’ll find other goodies.

Most of that is driven by the camera placed underneath the screen itself. This little webcam isn’t there to use for streaming and the like – instead it drives the artificial intelligence features baked in here.

First up, there’s facial recognition software – like you might have on your phone – which is intended to recognise who’s using the monitor at any given time. It won’t lock the computer  if someone else sits down, but instead it will recognise saved users and load up specific profiles and settings for them – ideal if your monitor is used by a few people with different tastes.

Profiles are as customisable as you’d expect, and tweaked using MSI’s Gaming OSD app. There are various presets – both for game genres like FPS or racing, or functions like design work – but you can also tweak them and create your own custom profiles, playing around with obvious stuff like brightness or colour temperature through to aspect ratio, refresh rate, screen assistance, motion blur, picture-in-picture, and more.

Even if the monitor is purely for your own use, the camera still has its place. That’s because in addition to looking out for people, it’s also keeping an eye on light levels in the room, and you can instruct the monitor to adjust brightness accordingly, saving you from excessive light when you’re gaming in the dark, or helping it match the glare if you’re playing during a sunny day. It takes a few seconds to scan levels and adjust the settings, but it really does work – and while it won’t keep scanning automatically, you can set it as a shortcut to a hardware button to adjust again with a single push.

There’s another helping hand from MSI’s Night Vision mode, an optional software trick that will brighten up the darkest parts of the display – and only those parts – to help illuminate particularly dark scenes in games or films so that you don’t lose the detail into the shadows. The effect is slightly aggressive for my taste, but it does do a great job of brightening dark spots without whiting out other areas. You probably won’t want to use it all the time, but for particularly dark content – or for anyone who’s hard of vision – it could be a real boon.

Finally, MSI says that eventually there’ll be support for Amazon Alexa, essentially letting you turn your desktop PC into a smart home hub – though that isn’t integrated yet. It is however integrated with SteelSeries GameSense, which will let you link the RGB lighting to all sorts of in-game alerts – using the five light strips along the bottom of the display as a health bar or ammo counter.

MSI’s software even has the option to use those lights to display the upcoming temperature or weather, with the colour of each strip changing to reflect the forecast for specific time period. It’s exactly the sort of silly little feature you’ll scoff at, but then turn on and end up missing every time you want to know when it’s going to rain at a glance.

If the AI smarts haven’t drawn you in, the good news is that this is still an almightily impressive display in its own right. The 34-inch VA panel has an ultrawide QHD resolution (3440 x 1440) in a 21:9 aspect ratio, with a curvature of 1800R.

If you haven’t used a curved panel that large it’s quite an experience – and not just for gaming. Sure it’s great feeling that extra bit immersed in a game world that wraps around you, but you haven’t lived until you’ve used Excel on a sweet 34in curve, spreadsheet cells wrapping around you like a warm blanket of formulae. *Ahem*.

Getting back to the specs, the MPG341CQR is anti-glare – another point for how it handles light – and packs in a 144Hz refresh rate and 1ms response time, so the thing is fast – just about everything you run on it will display buttery smooth, as long as you’ve paired it with a PC that can keep up.

That’s particularly impressive since this is a VA panel, rather than the more typical IPS tech in these sort of premium displays, but that does help when it comes to contrast, with a static contrast rating of 3,000:1. There’s support for adaptive sync too, but it’s FreeSync 2 rather than Nvidia G-Sync.

In our testing it hit 380 nits max brightness (very close to the 400 that MSI touts), with 99% sRGB and 83% AdobeRGB colour gamut coverage (also just shy of MSI’s specs sheet). In person it looks just as good as those numbers suggest, with great contrast rounding out the package – though it’s definitely not the brightest monitor around, which is the closest thing to a real weakpoint here. That’s partly since it’s rated for HDR400, meaning it technically supports HDR, but isn’t anywhere the brightness you’ll see from displays with more comprehensive HDR support.

The ports are frankly exhaustive – it would almost be quicker to list what isn’t here. There’s two each of HDMI 2.0 and USB-A 3.2, along with one port each for DisplayPort 1.4, USB-C, USB-B (used for connecting with your computer for the MSI software), a Combo Jack, mic in, headphones out, and a Kensington lock slot.

Not enough? There’s also an included webcam mount, so you can attach your camera of choice for streaming, along with an integrated mouse bungee. The mouse bungee has a pretty flimsy mounting though, and will fall right off if you yank too hard in the wrong direction, which does detract slightly from the polish of the package.

Finally, (phew) there’s the RGB lighting, which I’ve already sort of mentioned. Five strips run along the underside of the screen, while a separate array arcs down one side of the rear of the device. As already mentioned, you can run the lighting on its own or link it up to various alerts and triggers with SteelSeries GameSense.

The Optix MPG341CQR is a seriously impressive piece of kit that packs top – or near-top – specs across the board without quite being bank-breaking. A 34in curved panel, QHD, 144Hz, 1ms response, and great contrast and colour gamut mean this thing is as pretty to look at as almost any display out there – only the good-but-not-great 380 nits max brightness lets the side down ever so slightly.

The integrated smart features probably aren’t going to be the main selling point at this price, but they do help give this display a unique edge if you’re otherwise torn between some similarly specced set-ups. The facial recognition profiles will only be useful if you share your gaming rig with someone else, but the automatic brightness adjustment is a great little trick for anyone who can’t play in controlled lighting conditions.