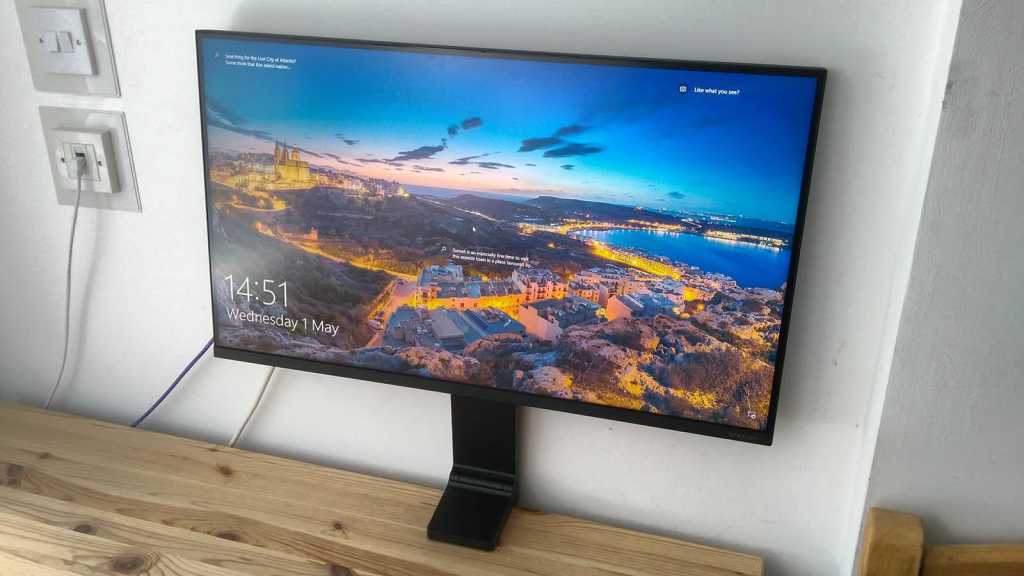 The Space Monitor looks stylish and takes up very little space on the desk. However, the support arm has many limitations, and it comes at a relatively high price of this product when compared with other 4K VA panels.

There was a time when 4K resolution, 100% sRGB colour coverage and VA technology were noteworthy enough for any screen, but none of these things is the big selling point of the Samsung Space Monitor. Instead, the pitch here is an integrated support solution that frees up desk space and allows better management of a working area for other purposes.

Therefore confusingly, this is as much about when you are not using it, rather than when you are.

That cost puts it above the budget 4K displays, but less than those designed specifically for gaming. However, you can find the monitor at Amazon UK and Amazon US starting at a more reasonable £279/$369 making it more attractive.

Many competitors are offering a 4K VA technology panel for less than Samsung are asking for the larger 32in model, which we’ve tested here. 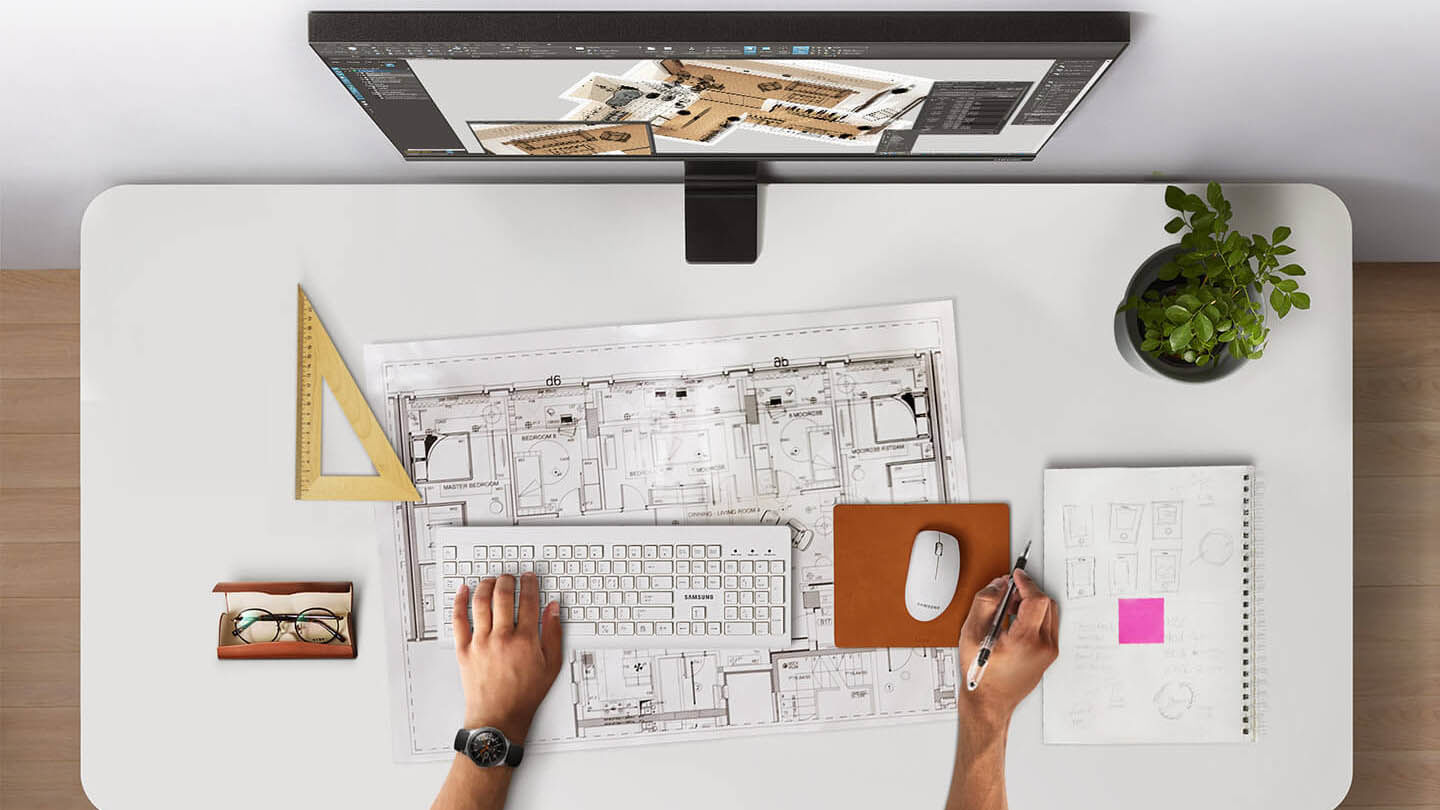 Samsung has a good reputation for sleek and stylish design, and the Space Monitor doesn’t contradict those conventions.

The VA technology panel technology used in it has enabled one of the smallest borders on the top and sides of any screen we’ve reviewed, and only the bottom has a strip wide enough to place a readable logo. At 26mm it is also very thin front to back. So narrow that it doesn’t allow for the inclusion of speakers or an internal power supply, regrettably.

The key selling point isn’t its overall elegance, but the integrated support arm that Samsung designed for it.

At one end it screws to the back of the Space Monitor just below the input ports, and at the other, it has a vice-like assembly designed to grip the edge of a desk. If you have a desk that isn’t thicker than 9cm (3.54 inches), this support holds the screen vertically about 18.5 cm off the desk, and the balancing foot sticks out just 10cm from the edge.

The support has two joints allowing the screen to come both down and forward, necessitating that if you want the screen lower it also must come towards you. There is no twist or pivot movement, and the S32R750 has no VESA mounting holes should you need either of those options.

What it does include is two tracks that allow cabling to run unseen to the back of the monitor, and Samsung includes a special combined HDMI and power line that fits one of the two channels in the support arm. The other slot is for a DisplayPort Mini 1.2 input, but no cable was included for that. 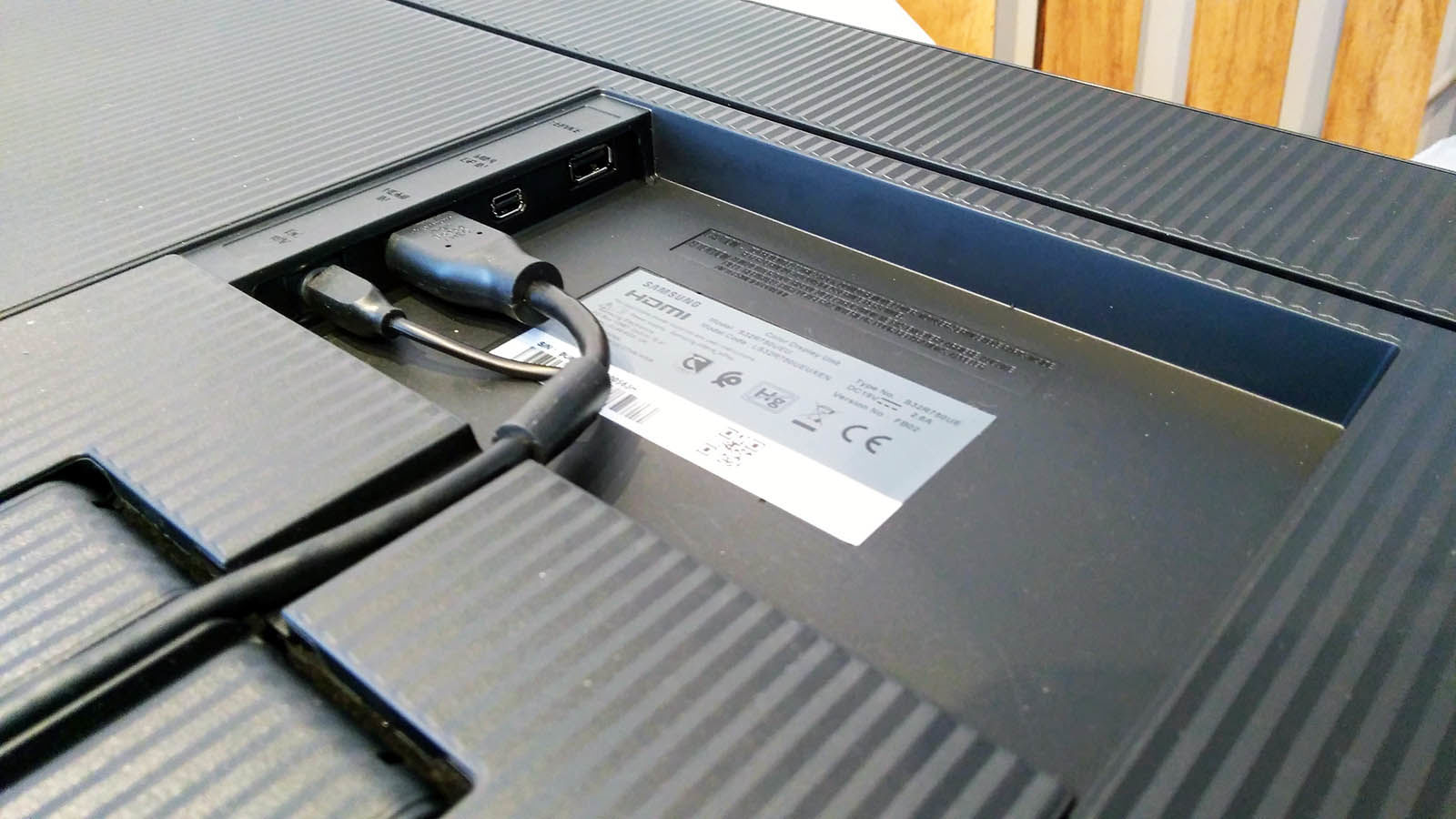 First, a few words of warning about deployment. We’d recommend that you attach the support and cabling before placing it on a table, and when you do that pull the desk well away from the wall so you can lift it into place from the opposite direction.

If you try to reach over the desk and attach it from the front the likelihood of back injury seems dramatically increased, and you won’t be able to hold the assembly perpendicular and tighten the clamp.

The screen and support combined weigh 7kg, and that might not seem much until you try to hold a naturally unbalanced object at arm’s length with one arm while reaching behind it with the other to tighten the clamp.

Once it’s clamped, you can push the table back against a wall, although you’ll always have roughly 10mm of support arm keeping it from going entirely flush to the vertical surface – wall or otherwise.

A good choice the designers made was to include a simple to operate joystick for operating the OSD. Although given that the panel could be resting on the desk surface, using buttons wasn’t an option.

The OSD has a quick access level where you can set brightness, contrast and Eye Saver Mode, and an extended menu system where you can customise the settings more. There isn’t any colour temperature or gamma controls, an omission that fits with the general use thinking behind this design. 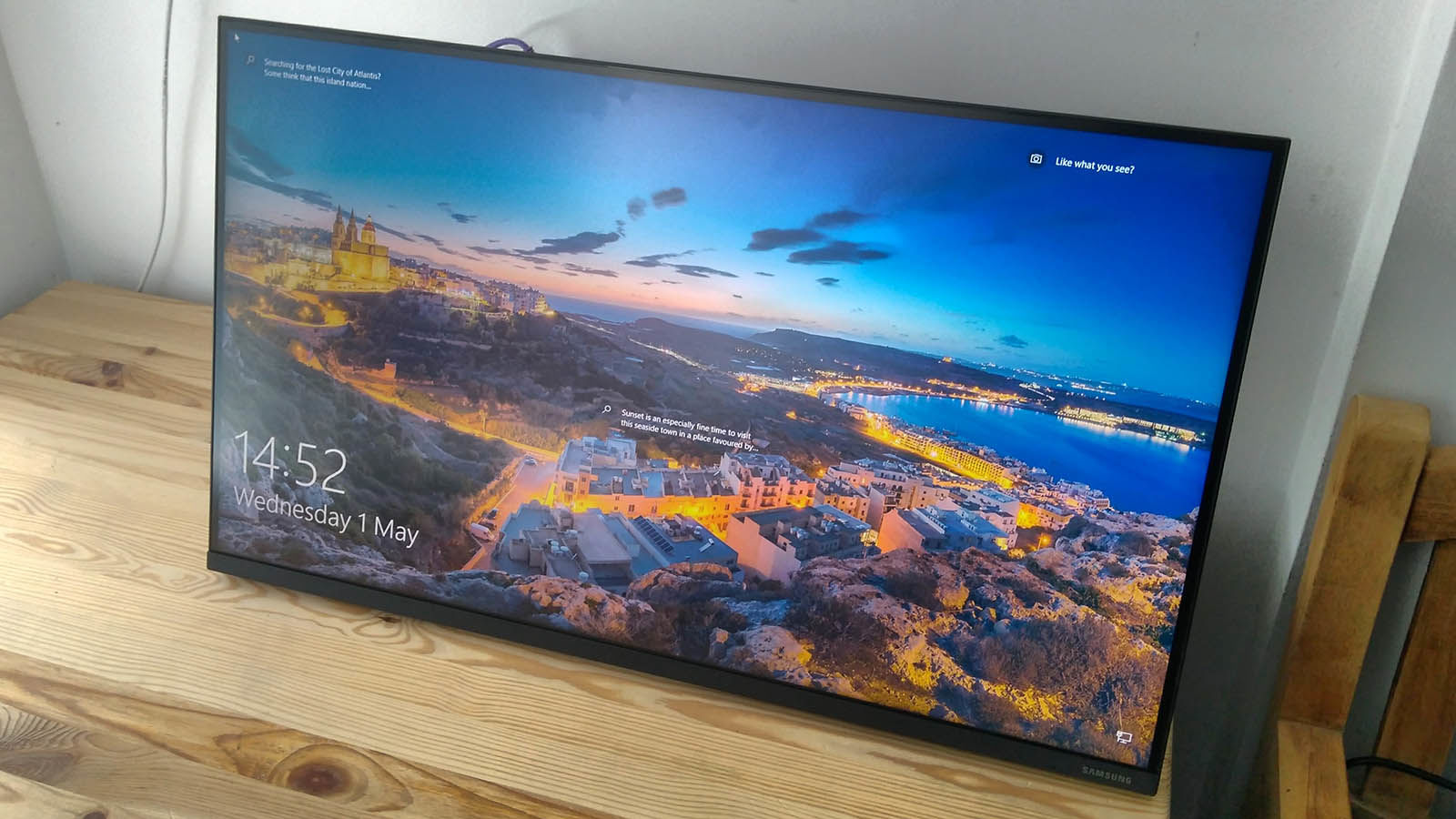 We’ve talked plenty about the support arm so far, but the Space Monitor sports a high-quality panel that can’t be ignored. Note that we’ve tested the 32in model here which has slightly different specs to the smaller 27in option.

This monitor uses a VA technology panel that has a decent colour gamut, excellent viewing angles and reasonable response times.

This all adds up to a specification that doesn’t make the S32R750 ideally suited to graphics professionals or gamers, putting it firmly in the useful-for-most-things category.

The very high resolution is good for those working on large documents, and the response time is low enough that you can play games on it. Although as it only supports up to a 60Hz refresh rate on 1080p resolutions or higher, most serious gamers wouldn’t consider it.

Our DataColor calibration analysis threw up some interesting information that showed that the S32R750 has a slightly better screen than even Samsung claims, in certain areas. 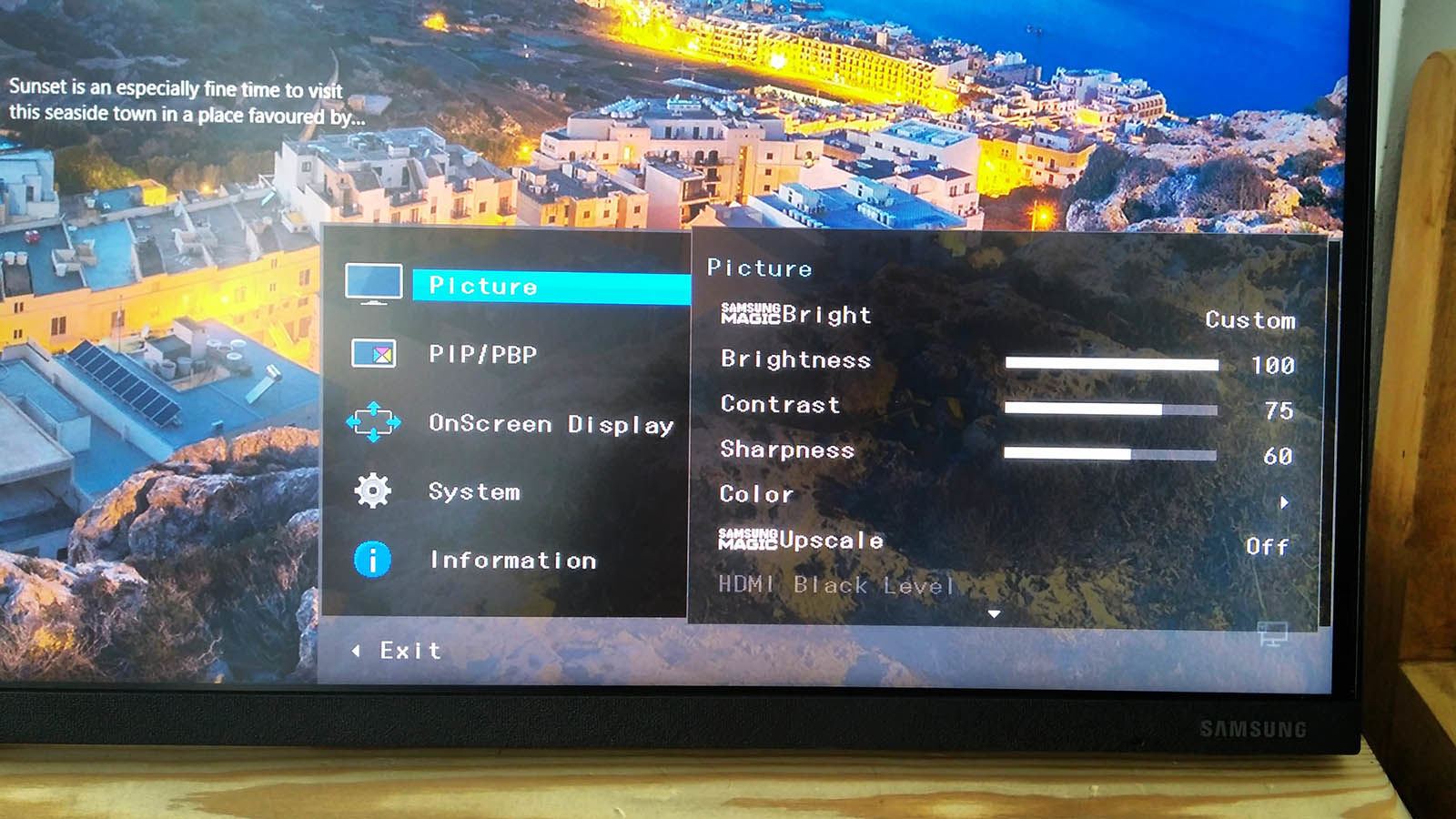 If the panel has a weakness, it relates to the uniformity of the brightness across the panel. The luminosity varies between 11-14% in the corners, being the brightest in the screen centre. Oddly given this scope, the colour uniformity is very good, with a variation from optimal of 4.2 at the top left, a less everywhere else.

Even with the brightness bias to the centre, this is a good quality display that most people would find perfectly acceptable for home or office work.

We’d contest that this screen is 10% about the panel and 90% about the support arm. As you might reasonably expect with one of the largest manufacturers of thin display panels, the resolution and colour gamut of this one is top notch. With the possible exception of gamers, many users would appreciate a screen and support like this one.

However, the elegance of the support does mask some major limitations that other support systems don’t have.

For example; there is no rotation other than tilt. Therefore, you need to mount the S32R750 exactly in line with the seat location, as you can’t angle it to face you.

Also, being able to pull the screen towards you and rest it on the desk is nice, but Samsung didn’t put any cushioning projections on the underside to protect it. We think this tilted option for the screen would have made more sense had it been touch-enabled, but it isn’t.

And, while Samsung thought long and hard about making monitor supports with the smallest possible footprint, they entirely ignored the other major space occupying components of computing; the mouse and keyboard.

Without a USB hub, the Space Monitor can’t get these off the desk, reducing the impact of what area the screen recovers for you. If the design had a hub, and some means to easily clip a screen and mouse on it, then it would be significantly more effective at saving space.

We should also mention that without speakers these will probably be added to the desktop as an accessory, further undermining the objective of this design.

That leaves the S32R750 as a decidedly situational solution. Because the stand isn’t replaceable with a VESA type should it not exactly fit your exact ergonomics. If it fits yours, then it this is a slick piece of equipment, and we can easily imagine it being perfect in an education context or for those with extreme space constraints.

Everyone else would probably be better off with the best 4K VA panel they can afford and a support arm that can twist and swivel for portrait mode, and even has a shelf for the keyboard to be lifted away with the screen.