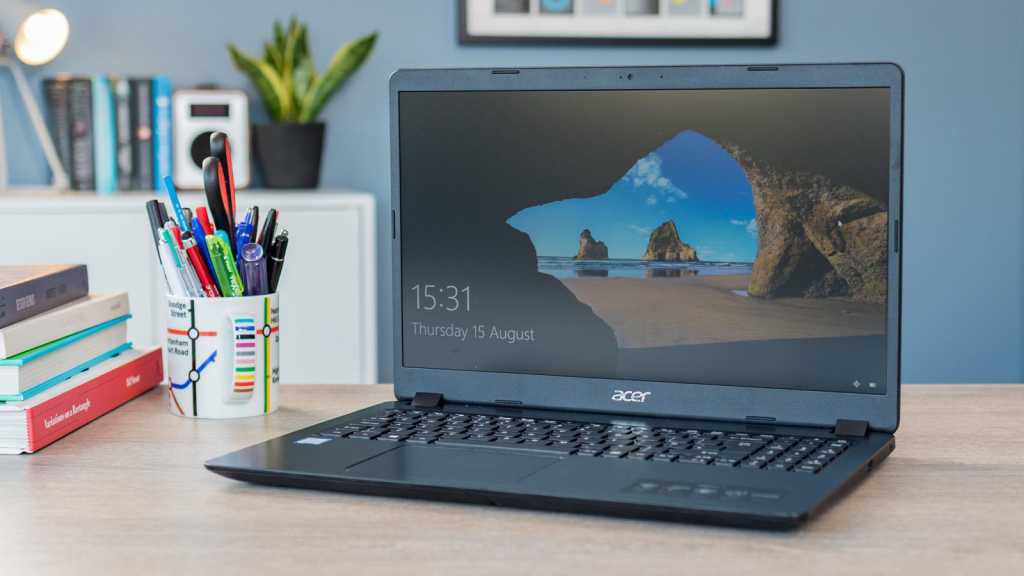 It’s not a perfect budget laptop but the Acer Aspire 3 has a lot going for it. Namely an 8th-gen Intel Core i5 processor offering levels of performance found on rivals that are around twice the price. Build quality is good but we’re left wanting from from the screen and battery life.

The Acer Aspire 3 offers a full-size screen, a speedy Core i5 processor and a huge amount of storage. Find out why it’s one of the best budget laptops you can buy in our full review.

There’s also a Core i3 processor option at Currys PC World with 1TB HDD storage as well for £429 – note that it’s an older 7th-gen processor and half the amount of memory.

If you’re happy with a marginally slower Core i5 processor (also with 1TB storage), there’s the slightly older Acer Aspire 3 (A315-53) model for £449 from Currys. This is essentially the same machine but with a processor that reaches a max speed of 3.40- instead of 3.90GHz, which is what you get with the 54 model.

We’d recommend spending the extra £50 but you can also see our chart of the  best budget laptops. You can also check out the Swift 3 if you want more style and feature like a fingerprint scanner.

The Acer Aspire 3 accommodates a large keyboard with a compact numpad, which is a handy feature for those in the habit of a full-size keyboard. The numpad is narrow, however, and just manages to squeeze in. If you don’t use a numpad much to begin with, it shouldn’t be an issue, but it’s a nice option to have.

In terms of looks, the Aspire 3 is all plastic, but it cleverly masks its budget price with an attractive, pebble-smooth, chic exterior (plast-chic?). The look carries into the keyboard area, though not around the bezels which uses a standard, grainy plastic finish expected on budget devices.

Thankfully, there isn’t much of a bezel to go around. The bezels are thin compared to other budget laptops, like the ugly yet powerful Lenovo V330R (£399), which fashions a chunky, unsightly border .

The 180-degree hinge on the Aspire 3 lets you push the screen all the way back too, not that you would need to very often, but it’s a welcome flexibility that eases fears of accidentally snapping the screen – another advantage for students.

The Aspire 3’s size makes it slightly weighty at 1.9kg, but it’s not unwieldy. The slim tapered form compensates for its weight. It’s no more than an inch when closed, which means it can slide into a backpack without taking up much room. See our round up of the best laptop bags.

The grips at the bottom of the laptop are also a nice touch. Apart from raised rubber feet, the Acer Aspire 3 features a long rubber strip that stretches across the bottom, making sure it doesn’t slide when in use.

The laptop comes with an HDMI, a USB 3.1 and two USB 2.0 ports, along with ethernet connectivity. There isn’t a disk drive if you want to watch DVDs, or an SD card reader either.

The Aspire 3 is equipped with an Intel Core i5-8265U quad-core processor that should reach 3.90GHz at maximum speed. Our PC Mark 10 test shows it gets to 3.69GHz. The regular clock speed is 1.6GHz and there’s 8GB of RAM.

When it comes to storage 1TB is loads but this is a traditional type of hard drive rather than a speedy SSD.

While the Aspire 3 is responsive, it can slow down if overburdened. We mostly used the laptop for browsing and watching content, but open too many tabs in Chrome or fire up multiple programs at once, and you’ll find the Aspire perspires a bit. It can handle the likes of Photoshop and video editors like Premiere Pro but we’re talking for occasional use that than a daily basis.

The Aspire 3 performed well in our benchmarks – see below. In PCMark 10 it scored 2960, placing it 17% ahead of other laptops with similar specs. On Geekbench, the Aspire 3’s quad-core processor received a multi core score of 14,133, which places it ahead of more expensive laptops like the Microsoft Surface Laptop 2 which has the slightly older Core i5-8250U processor (12,730) and the Huawei MateBook 13, which has a Core i7 processor (12,956).

In terms of gaming, the Aspire 3 scored 8,508 in our benchmark tests, which places it 29% ahead of similar laptops, including the Lenovo V330-14ARR which scored 8,244. While it may be able to handle some gaming, the display and limited battery life (more on this below) could get in the way of an immersive experience.

The laptop isn’t designed for gaming as you’re relying on the integrated Intel UHD Graphics 620. You’ll be better off with a more powerful machine if that is what you’re after. See the best gaming laptops in our dedicated chart.

The LCD display, branded as an ‘Acer HD Comfyview LCD’ is, as advertised, comfortably bright and sharp. The ‘Comfyview’ refers to the screen’s anti-glare feature, which lends a matte look instead of a glossy (or glassy) one that you may find on other laptops. It’s a handy feature to have if you mainly intend write, view documents or read, which is likely if you’re a student.

Despite its anti-glare display, colours look surprisingly vibrant and there is a strong contrast between colours. It’s not excellent, but it should suffice for that casual mix of work and entertainment. Keep in mind, it’s not an incredibly bright screen at a maximum of 211cd/m2 in our test. It’s ok at full brightness, but lower settings any will seem a tad dull.

It’s a shame that the resolution is the archaic HD (1366 x 768) rather than Full HD which we would expect in 2019 at this price. Acer has clearly put money towards the processor instead.

The Aspire 3 promises an 8 hour battery life, though in our tests where we loop a 720p film at a brightness of 120cd/m2 (50% in this case). The device lasted a fairly average six hours.

As mentioned above, you’ll need to likely want to use the screen at full brightness so this will make the battery life even shorter.

If you’re looking for a powerful laptop at under £500 then the Acer Aspire 3 fits the bill. The A315-54 has an impressive Core i5 processor which you don’t normally see. This means it’s got similar raw performance to laptops that cost double the price.

Build quality is good too with a decent enough keyboard and a nice range of ports.

However, it’s not all plain sailing as the screen is just HD resolution and will need to be used at or close to maximum brightness. The battery life is also nothing special.