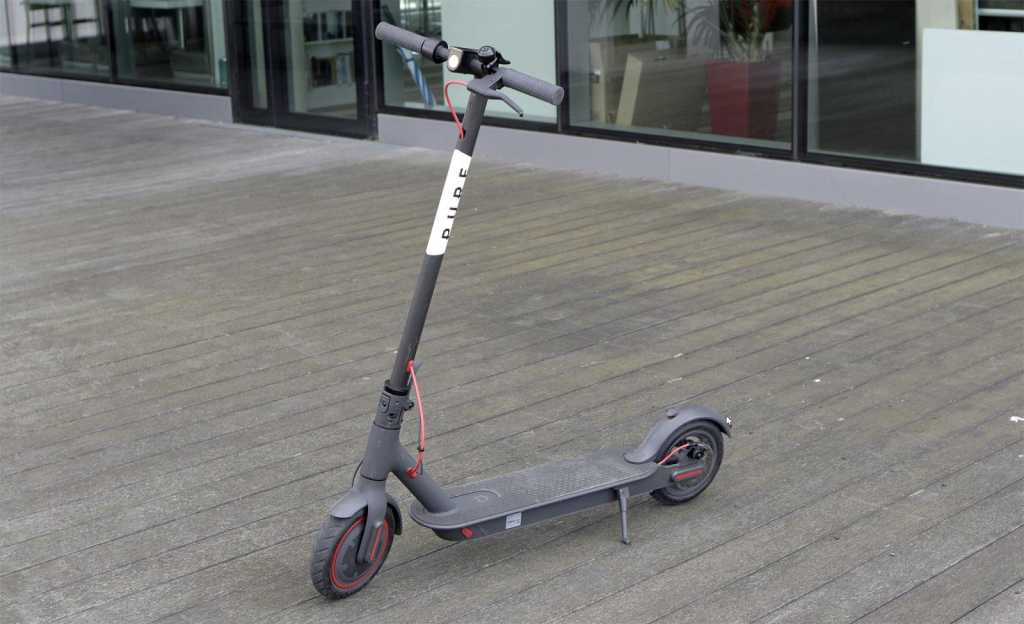 Improvements over the original include a bigger battery, better motor and a new display. But these come at a much higher price, and more bulk and weight. It’s still a great buy, but you might find the original is better value, especially if you don’t weigh too much.

We’ve already tested out Xiaomi’s popular M365 scooter. And there’s a reason why it’s chosen by so many: it’s affordable, well built and is generally a great all-rounder.

For 2019, Xiaomi has decided to launch a Pro version. It looks much the same, but has a more powerful motor and much more battery capacity, so it can take you not just from A to B, but also to C, D and probably E too.

Where to buy Xiaomi Electric Scooter Pro in the UK

You can buy the M365 Pro from quite a few places, including the usual Chinese retailers. However, our sample was provided by UK retailer Pure Scooters, and when you’re spending this much, it’s a bonus to have a UK point of contact to sort out any issues.

In fact, Pure Scooters offers a two-year warranty and a UK charger. Note that stock hasn’t yet arrived in the UK, so prepare to wait until about the end of August 2019 for delivery.

If you’re happy to buy outside the UK then note that the Pro is available from GearBest now at the reduced price of £437.94.

If you want to see alternatives, check out our roundup of the best electric scooters.

The M365 Pro uses the same basic design as the original, just a little larger, and so it has an all-black design with red highlights. Pure has added the decal you see in the photos here.

It’s bigger than you might think, at over a metre tall and pretty heavy at over 14kg. So, like the M365, it isn’t for kids. Instead, it’s aimed at adults and is ideal if you have a commute to work where you can ride in bike lanes, wide paths or quiet back streets.

There’s a problem for UK buyers, though, in that the law currently prohibits the use of electric scooters both on the road and on pavements. This could change soon, as many European countries already allow scooters on pavements. But it does make an electric scooter a risky purchase if you are in the UK unless you’re only planning to use it on private land. Find out more about their legality.

The 300W motor easily propels you to the limited top speed of 15.5mph (25km/h), but there are various modes including Eco which accelerates more slowly and has a lower top speed (15km/h) to save batter power and increase range.

And speaking of range, the huge 474Wh battery is good for 45km (29 miles), which is 15km (10 miles) more than the standard M365. As with most electric scooters, it’s very quiet, so the motor won’t get on your nerves as you ride.

The M365 Pro folds just like its predecessor, so a quick-release lever at the bottom of the steering tube is all you need to pull. 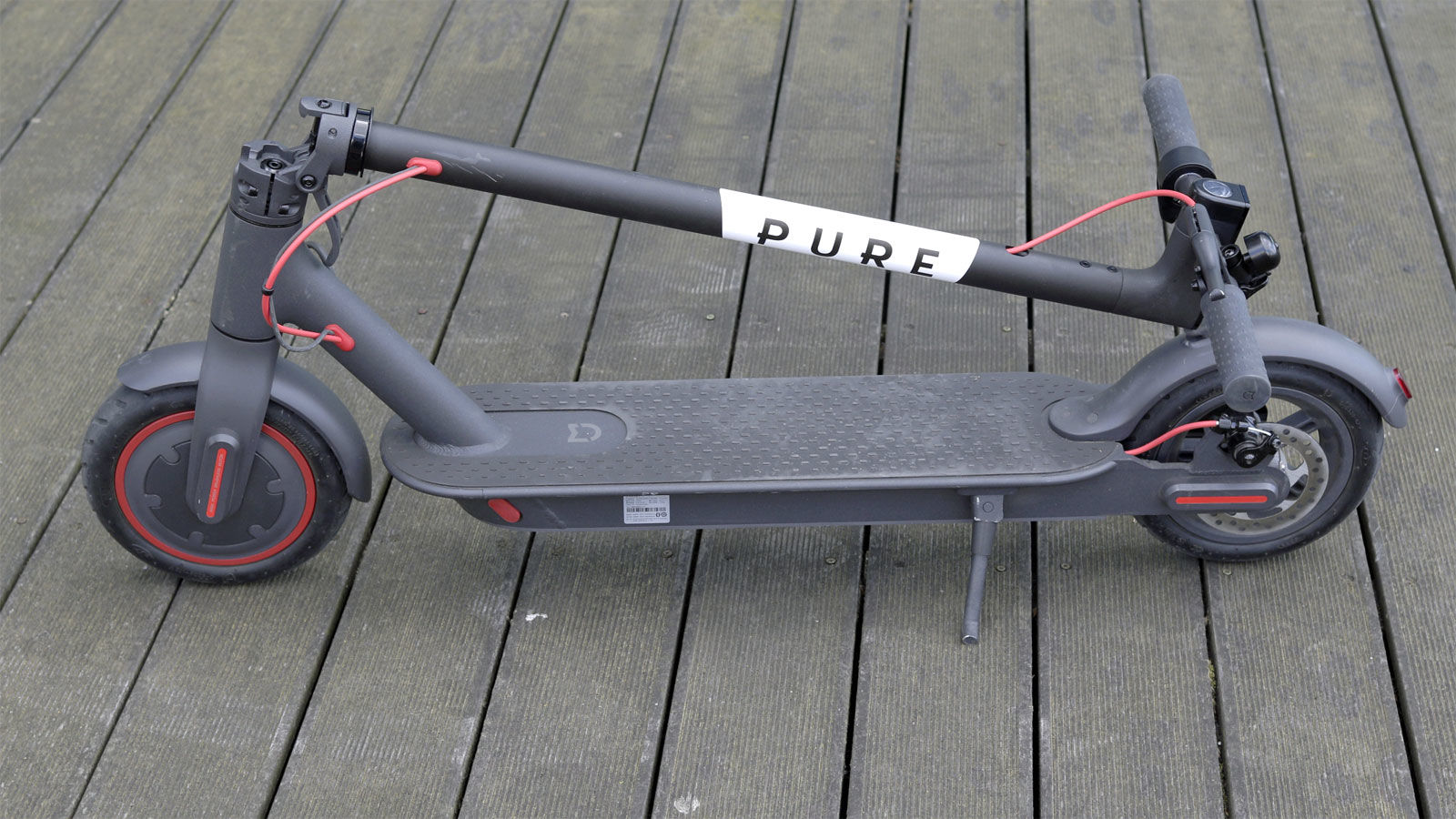 When folded, the bell trigger hooks onto the rear mudguard to stop it hinging back up, but even so it’s quite unwieldy to carry at over 1m long. Plus, the weight will be a problem if you have to carry it up flights of stairs or anything more than a short distnace: we wouldn’t attempt to put it on the luggage rack on a train, for example. 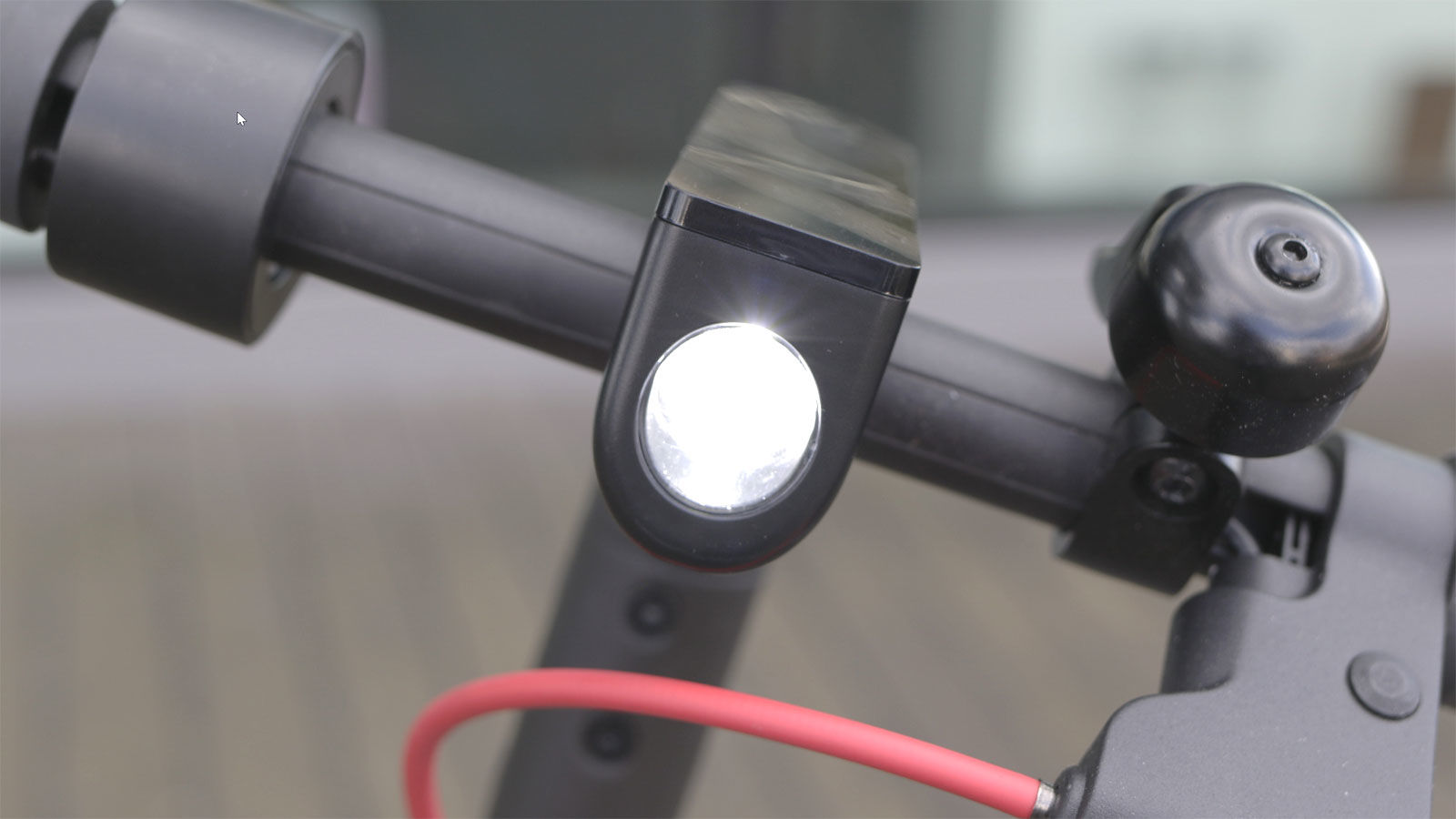 There are built-in lights front and rear. The back light is always on, and flashes when you brake. We were happy with the stopping power of the disc brake, which is a little bigger than on the original M365, and the motor offers some braking force in the front wheel too. 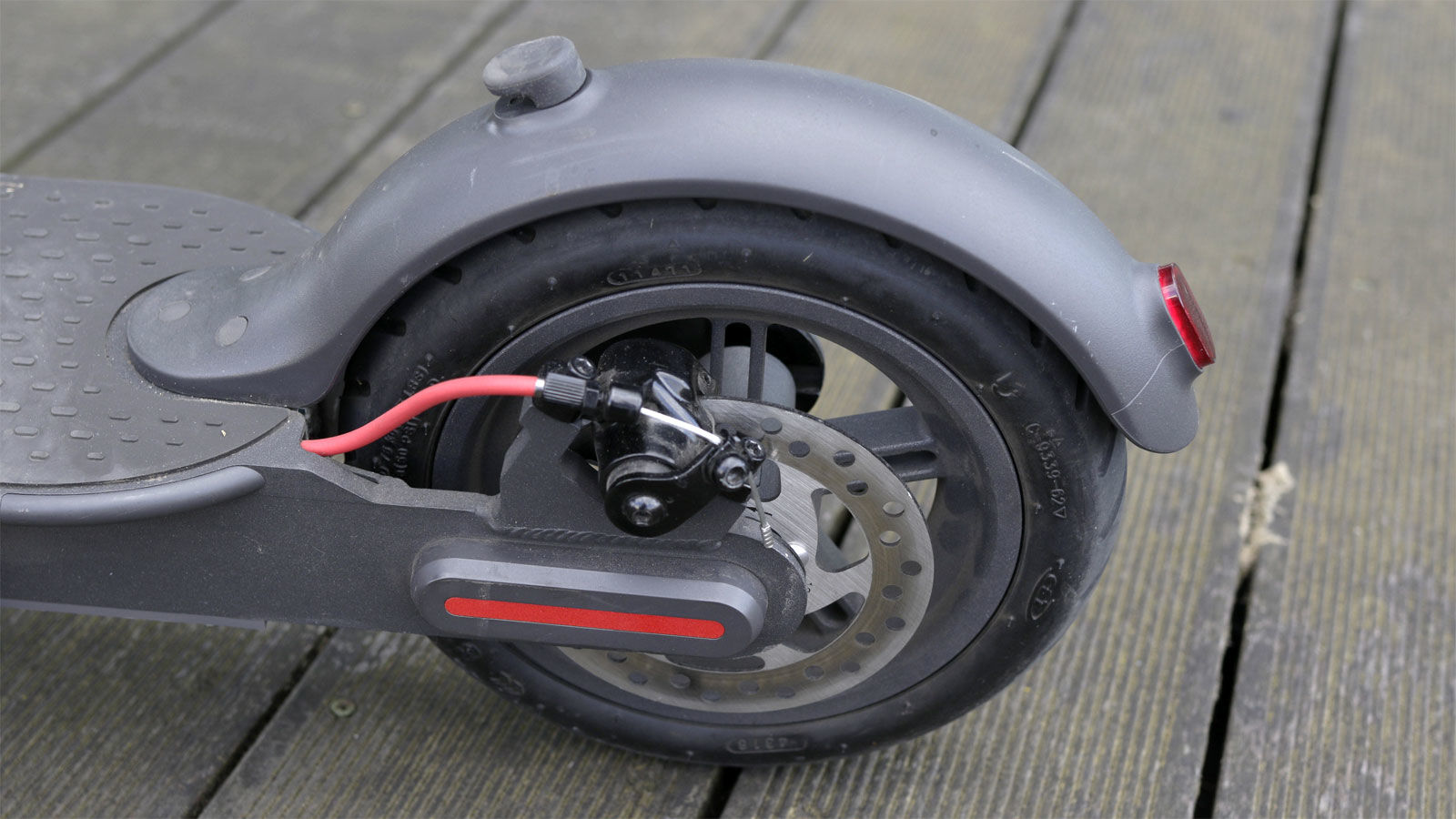 With 8.5in wheels and pneumatic tyres, the ride is relatively comfortable on smooth ground, and the Pro is nice and stable. You do feel like you need to keep both hands on the grips, though, so it isn’t easy to use your arms to signal you’re turning left or right as if you were on a bike.

A safety feature means the motor won’t engage with simply the throttle: you have to kick off first and get up to walking speed at least. Once you’re going, you can pin the throttle to get maximum acceleration, and it certainly gets up to top speed quickly in S mode.

On uneven ground it can be tricky to keep the throttle pushed down, and it can lead to a kangaroo effect as your thumb bounces up and down. Riding over cobbles isn’t recommended, nor is riding off kerbs. Don’t even attempt to ride up anything other than a dropped kerb unless you’re a pro: you’ll almost certainly be thrown off!

Hills do affect performance, although even on a couple of relatively steep climbs the M365 Pro was still able to maintain a decent pace. The official figures are 7-15km/h, but expect the former if you weigh 85kg. On the original, you had to kick to help the M365 along if you were over about 55kg, so the extra power is certainly welcome. 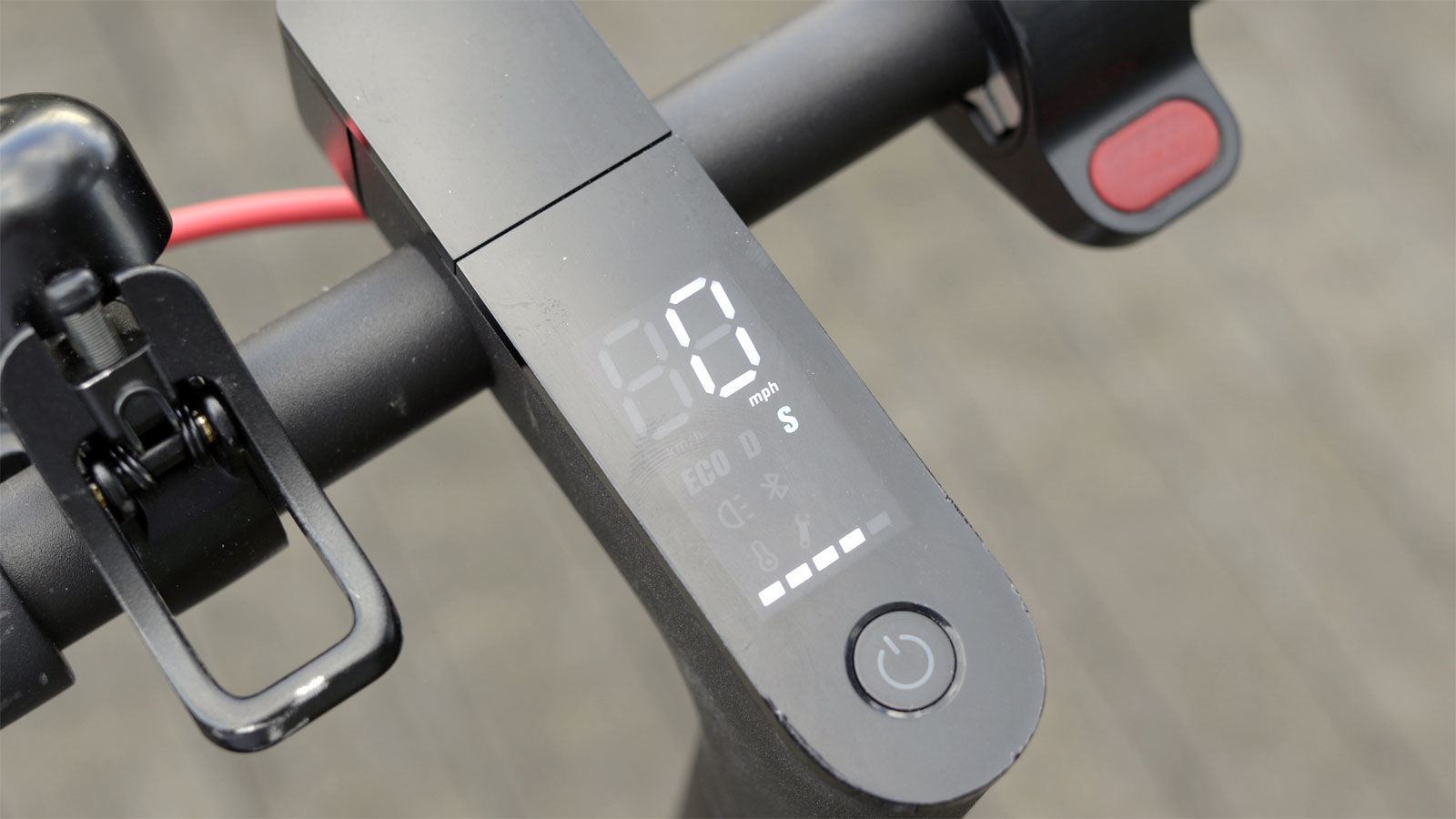 The display, in the centre of the handlebars, has been upgraded to show your speed, current mode, a maintenance light and (as before) a series of bars which indicate remaining battery power. Just one button controls everything, so a long press powers everything on and off, while a short press turns the front light on and off. Two presses toggles between the power modes, Eco, Drive and Sport.

As with the M365, there’s built-in Bluetooth so you can use the MiHome companion app to track things such as battery power and speed. But given these things are already displayed on the handlebars, there’s no great advantage in using it, and there’s no phone mount on the bars anyway.

The M365 Pro is much like the original but with a bigger battery for better range. That’s a great recipe if you need to ride further each day, but if you’ll need to carry it much, you’ll probably wish it was lighter.

At this price, it’s good value but if you don’t need that extra power or range, the original M365 is a better choice for most people, and it has the same top speed.