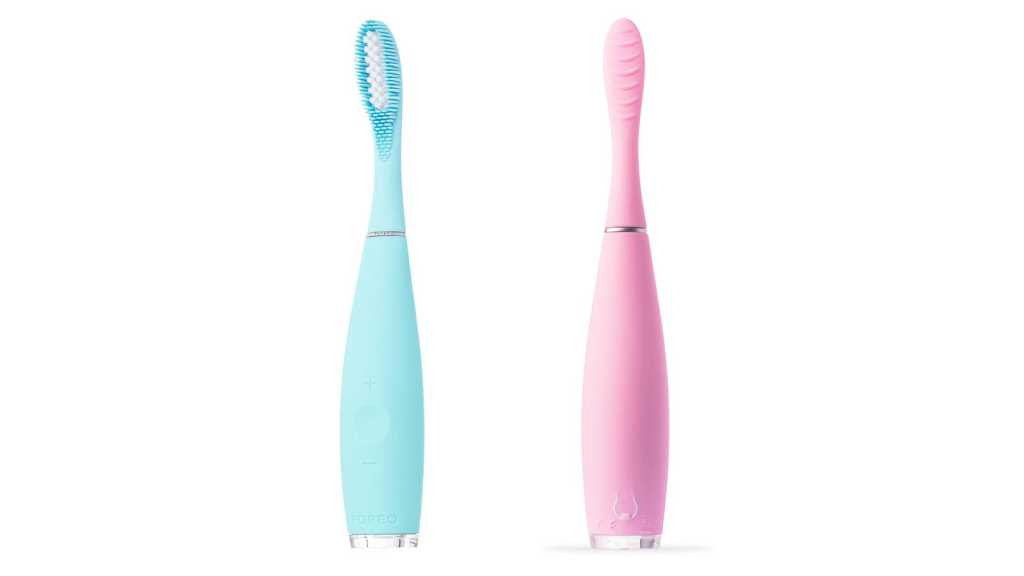 We love the way the Foreo Issa 2 looks and feels. In most circumstances its long brushing area provides a good, efficient clean, but a lack of penetration becomes apparent when dealing with very stringy food leftovers – be sure to pair it with a regular flossing regime. And the battery life claims are astonishing, even if we can’t confirm them from a week of testing.

Foreo’s Issa 2 is an unusual-looking electric toothbrush with a clever selling point (silicone bristles) and an astonishing claimed battery life. But can it live up to its bold marketing? We spent a week brushing and testing to deliver this review.

The Issa 2 has an RRP of £149 in the UK, and you can buy it for that price from Foreo itself or John Lewis. Amazon charges anywhere from £119 to the full £149 depending on your choice of colour.

The above pricing refers to the bundle which includes only the hybrid bristle/soft silicone head, but John Lewis offers a Sensitive Set, which comes with an all-silicone head too, for £169. Replacement heads are £17.

The Issa 2 comes in four colours: Cool Black, Cobalt Blue, Mint and Pearl Pink. We’ve only seen the blue version in the flesh, but absolutely love its vivid, vibrant look – although as ever with hygiene accessories this may pall after a few months of heavy use. 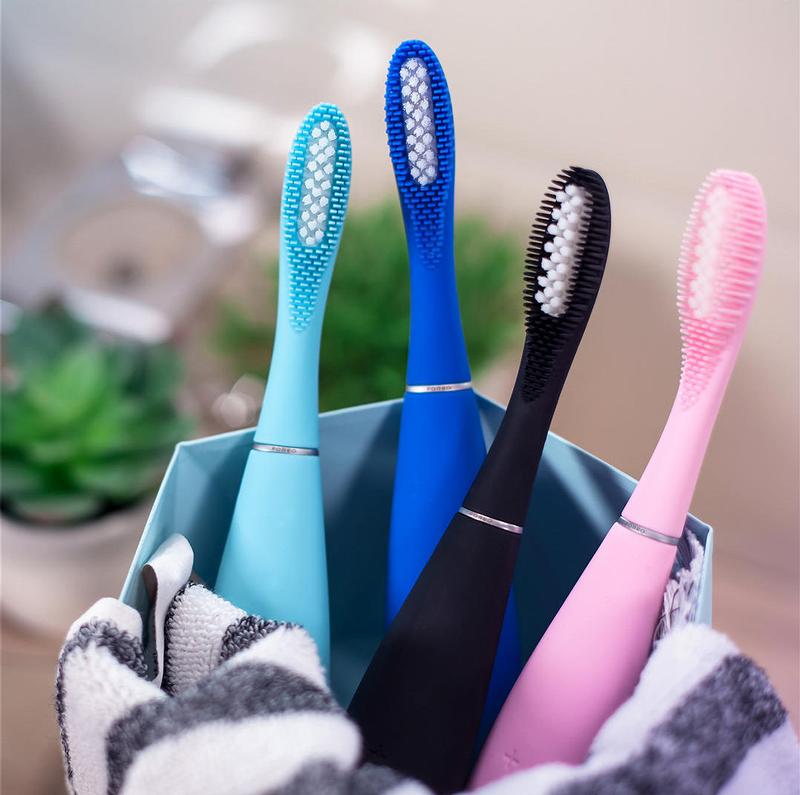 And the design is eye-catching in other ways too. For one thing the handle is fatter and curvier than we’re used to, making it comfortable in the hand (this is also aided by the smooth matt finish, which feels great). And this faintly Weeble-like silhouette also gives the brush a pleasingly low centre of gravity and a lower tendency to fall over when you stand it up.

What of the business end? You’ll immediately notice that the brushing area is far longer than on conventionally designed electric toothbrushes: 52mm, if you include the tiniest bristles as the size tapers off towards the bottom.

Foreo has made a big point of those coloured silicone bristles, which extrude organically from the head rather than being implanted into it. As well as being soft, the silicone is quick-drying and non-porous, which makes bacterial buildup less of a concern, and we like the way it feels in the mouth.

But the default head has normal bristles too (in three rows in the centre of the head, surrounded by silicone) and one suspects that these will have the same bacterial issues as a conventional brush. If you want to go all-in on the benefits of silicone, you can (as mentioned above) buy an all-silicone head for £17, or pay extra for the Sensitive Set that includes it.

There are three buttons: a concave circle that turns it off and on, and + and – buttons above and below which adjust the speed. The circle is easy to find without looking but the speed adjusters are not.

Charging, unusually and conveniently, is done via a USB cable rather than a specialised shaver plug. The power port is hidden under a rubbery cap that is a nightmare to get open, but (as we’ll discuss in the specs section) you shouldn’t have to do this very often.

The long brushing area means you often find yourself brushing two or even three teeth at once – or rather, brushing one tooth properly and getting some bonus partial cleaning for its neighbours. That’s a timesaver.

There’s a nice ‘buzz’ to the brush and you get 16 speeds to choose from, with a maximum of 11,000 pulses per minute. Other brushes offer specific labelled modes, which can be more instructive, and there’s no indication here of which speed you’re using – the brush in general is surprisingly lacking in LEDs and indicators – so you’ll need to experiment. Using the brush straight out of the box it buzzed so hard that it exacerbated a mild hangover. 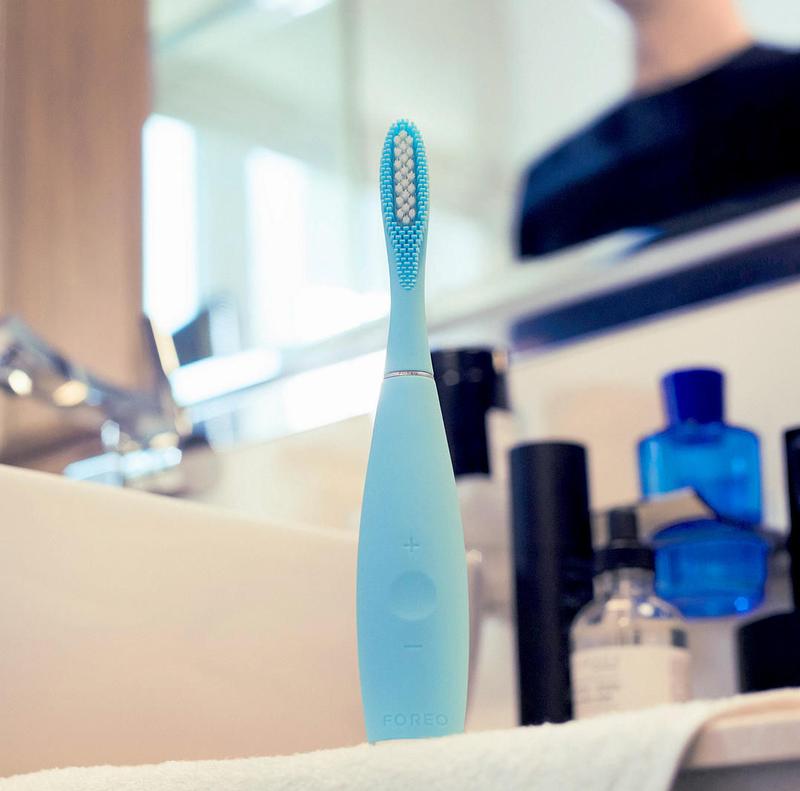 We felt that the Issa 2 provided a good clean in most circumstances, although – and please excuse us if this is unpleasant to read – situations where you’ve got a lot of detritus in your teeth can be a challenge. We ate crispy Mongolian lamb on one occasion and the Issa 2’s bristles didn’t seem able to completely clear that out, and it was necessary to supplement the brush with some flossing (which admittedly is a good idea anyway).

The bristles don’t look particularly short or shallow (some of the silicone ones are as much as 8mm) but it feels like the stiffer and shorter bristles in the middle are preventing the softer and longer ones on the outside from getting into the nooks and crannies. Whatever the cause, this isn’t a very penetrative brush.

The lack of smart features (a surprising omission at this price) means the main thing to talk about here is the claimed battery life, which is astonishing: Foreo says it’ll last 365 days between charges, a vast improvement on the brushes we’re used to. We described the Philips Sonicare ProtectiveClean 6100‘s three-week life as “whopping”, for instance.

That isn’t something we can realistically test, unfortunately; we couldn’t even leave it running continuously for the approximately 24 hours that a year’s use would appear to equate to, or the astonishing 30 hours that Foreo claims separately, because it automatically powers down after use. All we can say is that we haven’t had to charge it in the week or so we’ve been using it, and that even if Foreo is exaggerating by a factor of 4 or 5 it would still be fantastic.

Needless to say, if and when the brush does run out of power we’ll update this review to say so.

The Foreo Issa 2 is a decent brush with lots to recommend it but a few caveats.

We love the way it looks and feels, both in the hand and in the mouth. In most circumstances it provides a good brush, and the long brushing area means you can achieve this quite quickly – but its comparative lack of penetration means it should be paired with a regular flossing regime, especially after meaty, stringy meals that leave lots of bits. The lack of smart features is also a bit of a disappointment at this price.

The silicone bristles are a clever inclusion with a number of advantages, including softness and speed of drying. But the default head has conventional bristles too, which means presumably that you’re stuck with their slower drying speed, susceptibility to bacterial buildup and so on. An all-silicone head enables you to fully embrace that material, but costs extra.

Finally we can’t confirm or deny Foreo’s battery-life claims at this point, but they remain astonishing. As stated earlier, they could be a major exaggeration and still be superb.