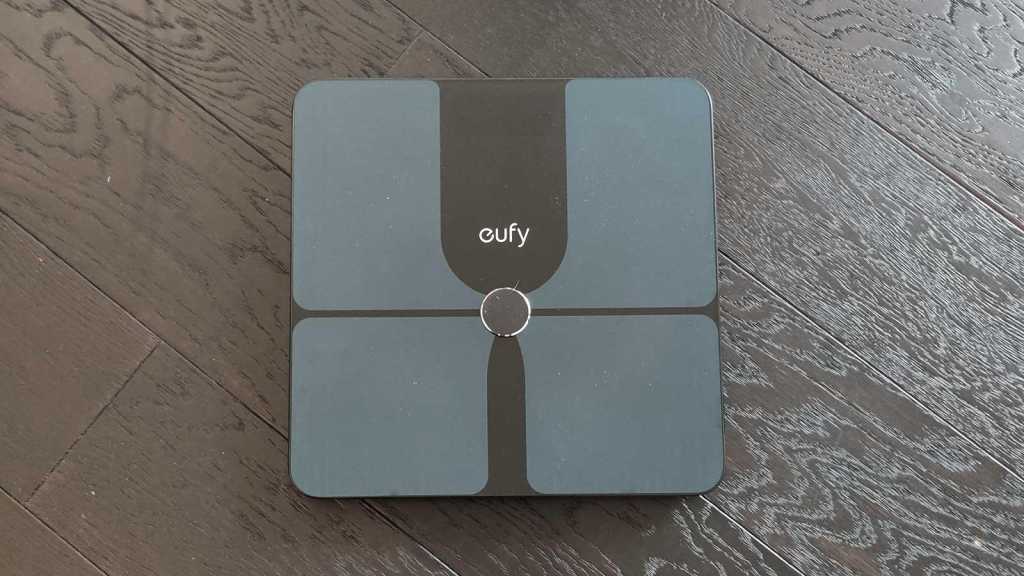 There are a few downsides to the P1 – no Wi-Fi, no recharging, and no carpet support – but these are really the sort of premium touches that most people won’t be worried about. If you want a simple smart scale that will track the core metrics in an easy-to-use app, can cover your whole family, and will sync up to the Google or Apple apps, there’s really no reason to spend more than this.

Smart scales are getting more and more affordable, and at this point there’s really no good reason to buy a set of bathroom scales that don’t link up to your phone or measure your body fat percentage. Eufy is one of the companies leading the charge on bringing those features to budget models, offering the key features of high-end smart scales at lower prices – though there are some drawbacks.

At the time of writing the Smart Scale P1 is at the top end of Eufy’s smart scale lineup, though it’s still a very budget-friendly option. Strong app support and a range of measurement tools are the big draws here, but you do miss out on Wi-Fi support and the option to use it on carpet.

Still, it’s a lot cheaper than most of the other smart scales we’ve reviewed, with the top options from Withings, Qardio, and Fitbit all costing £100/$100+, despite providing similar measurements – though as we’ll see, there are some premium touches that you miss from Eufy’s cheaper offerings. 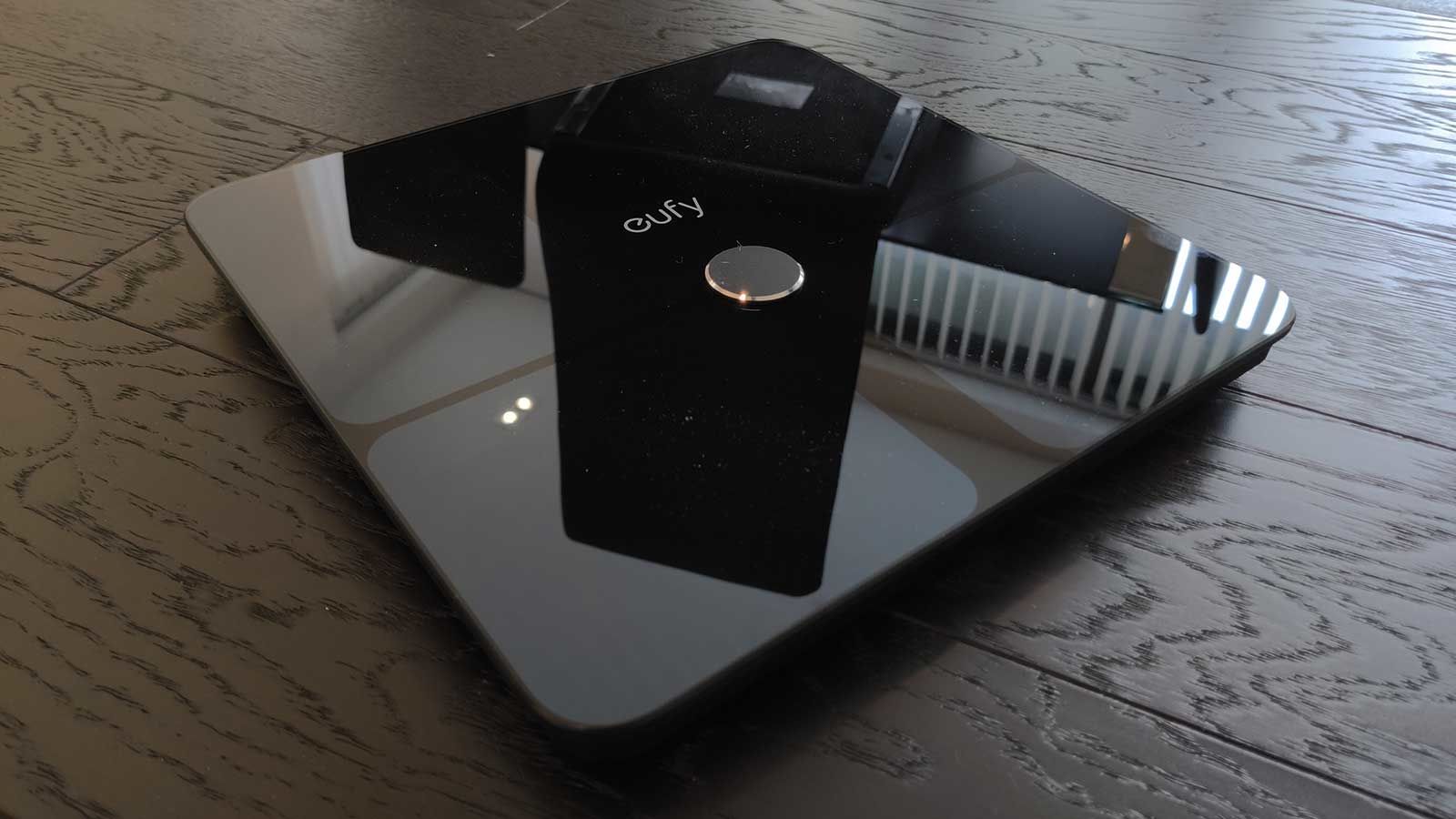 The first thing to know about the P1 is that it will measure just about anything you could ever want it to. Eufy boasts that it tracks 14 different metrics – up from 12 on the recently reviewed BodySense – ranging from standard stuff like weight and body fat percentage up to visceral fat levels and bone mass.

The two new metrics added here are a body age estimate (it flattered my 28-year-old self by telling me by body age is 23) and protein levels. It’s worth noting though that in reality most of these different metrics will be generated from a few core measurements – especially since that ’14 metrics’ number is massively inflated by double-counting fat, muscle, & bone mass by weight and by percentage.

So don’t get carried away obsessing about all of these different measurements – they’re mostly a load of different numbers telling you the same sort of things, and using the same data to do it. The things that really matter here are your overall weight, along with your fat, muscle, and bone mass percentages – these are the best indicators of your health and the things you’re most in control of. 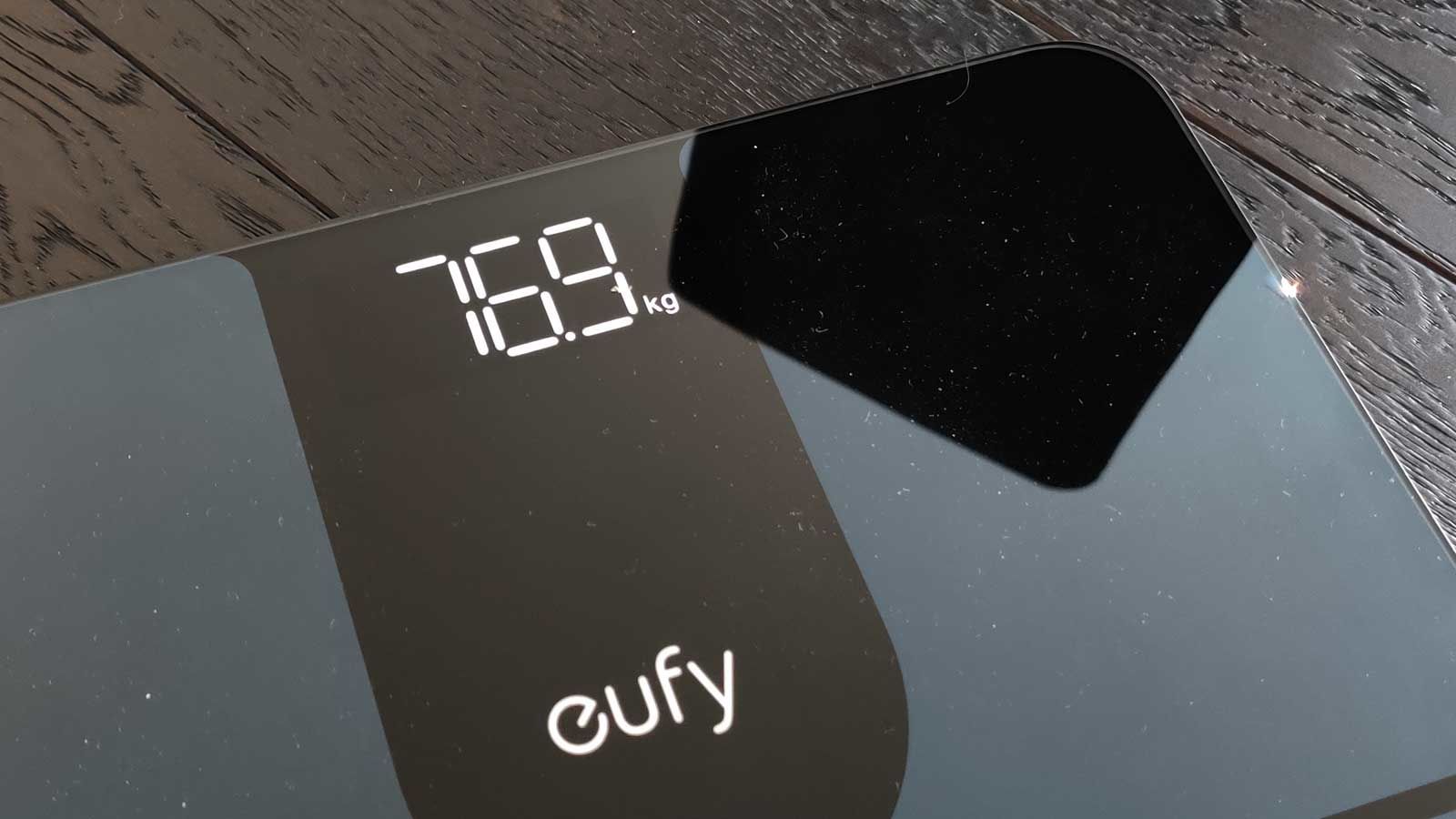 When you weigh yourself you’ll only see your weight appear on the LED display on the scale itself – probably the main number you’re worried about – and you’ll have to jump into the app to see more than that. Luckily the interface is crisp, clear, and easy to navigate – this really is one of the best things about the Eufy scales, as the app is much friendlier to use than most rivals, even much more expensive ones.

You can dive into the detailed reports for any weigh-in to see each of those 14 metrics, with guidelines on what numbers to aim for, or you can see your historical trends graphed out – though only for weight, BMI, and fat & muscle percentages. This data can also be shared with Apple Health, Google Fit, or the Fitbit app if you want to keep all of your health data in one place.

You can also set a weight goal, though not for any of the other metrics, and there’s no support for a pregnancy mode – one of the features mostly found in higher end scales. 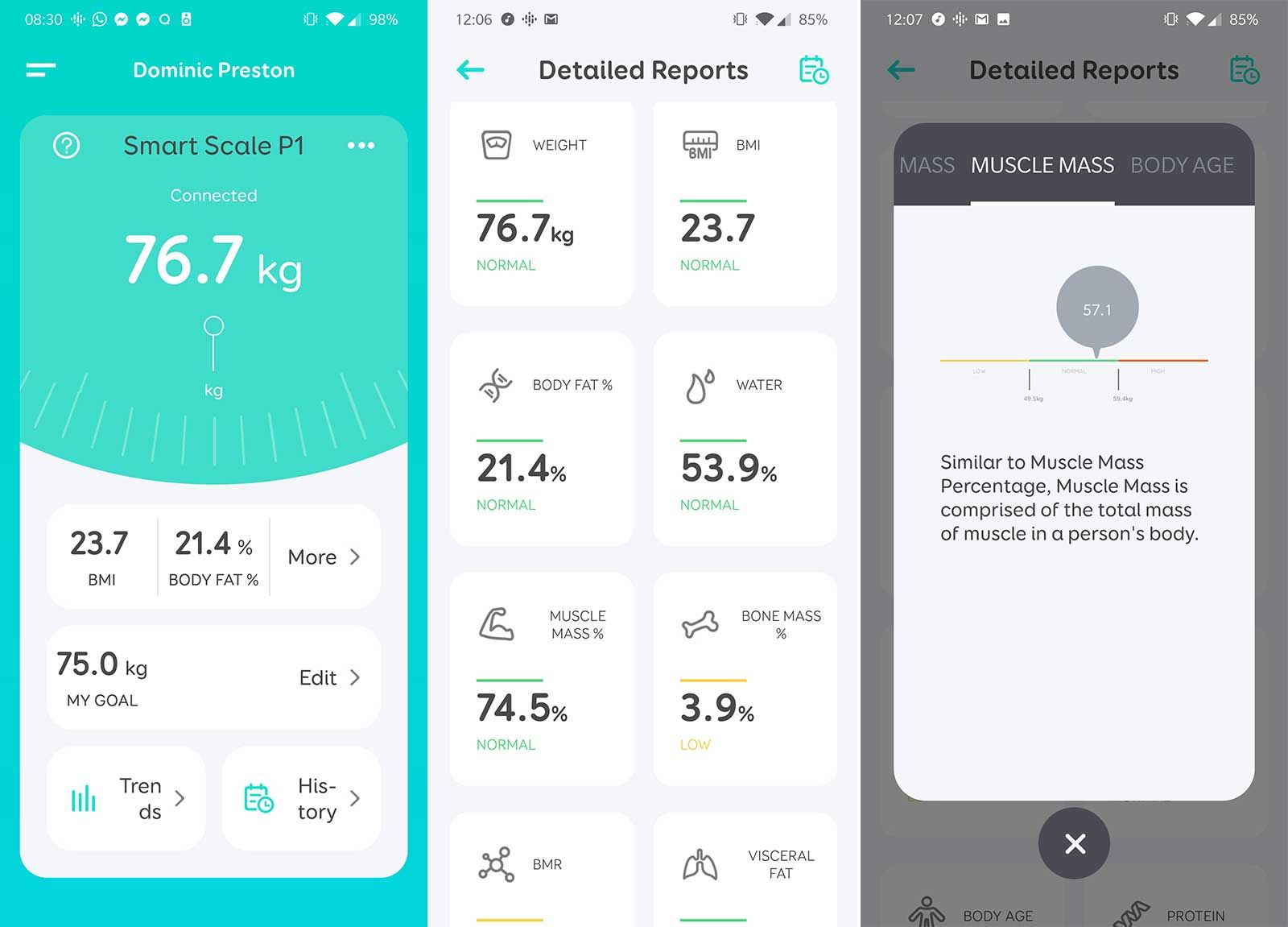 These scores are separated out by person, with support for up to 16 unique users, though there’s no automatic user detection – instead you’ll have to make sure to open the app and set it to the correct user or account before stepping onto the scale if you want to make sure it saves to the right profile.

The big downside here is that like most cheaper smart scales, the Eufy P1 only supports Bluetooth, and not Wi-Fi. That means that you’ll have to remember to open the app on your phone while near the scale for the data to be transferred across – whereas Wi-Fi scales like the QardioBase 2 sync their data direct with the cloud, so you can check the app whenever and wherever without the fear of missing out on data being synced up.

Moving on from the software side, when it comes to hardware the Eufy P1 looks pretty similar to the company’s other scales. It’s a simple curved square, with a subtle black and dark-blue finish to the glass body. There’s a small Eufy logo and an LED at the top, which shows your weight when you step on – with a small switch on the back to flip this between kg and lbs. 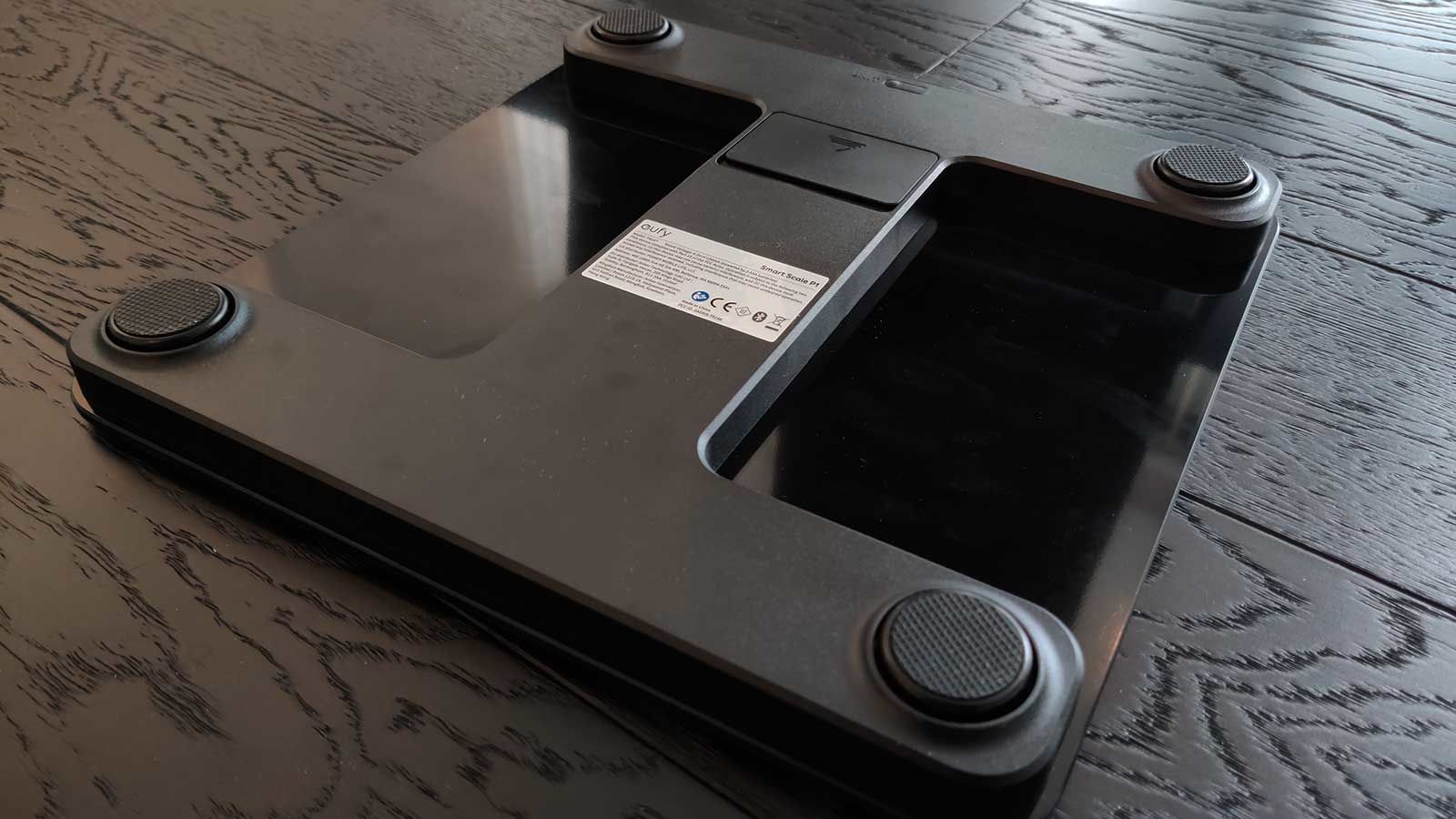 It’s an attractive enough piece of tech – especially for something you’re not likely to have on display anyway – and this is one area where there’s really no need to pay the premium for more expensive alternatives, as they won’t look much better than this.

One potential downside is that it’s powered by three AAA batteries, so it isn’t rechargeable, but the batteries should last a good few months of normal use anyway, so you won’t need to charge it up too much.

The bigger downside is that the short feet aren’t carpet-friendly at all. While most scales recommend that you use them on a hard surface, some (including the aforementioned QardioBase 2) will work equally well on short carpets. Not so the Eufy P1 – even the thin carpet in my bedroom was enough to throw the measurements way off, so this is really only an option for hard floors. Obviously that should be fine if you intend to place it in the bathroom anyway, but if you’d rather place it in a carpeted bedroom, you’d best look elsewhere. 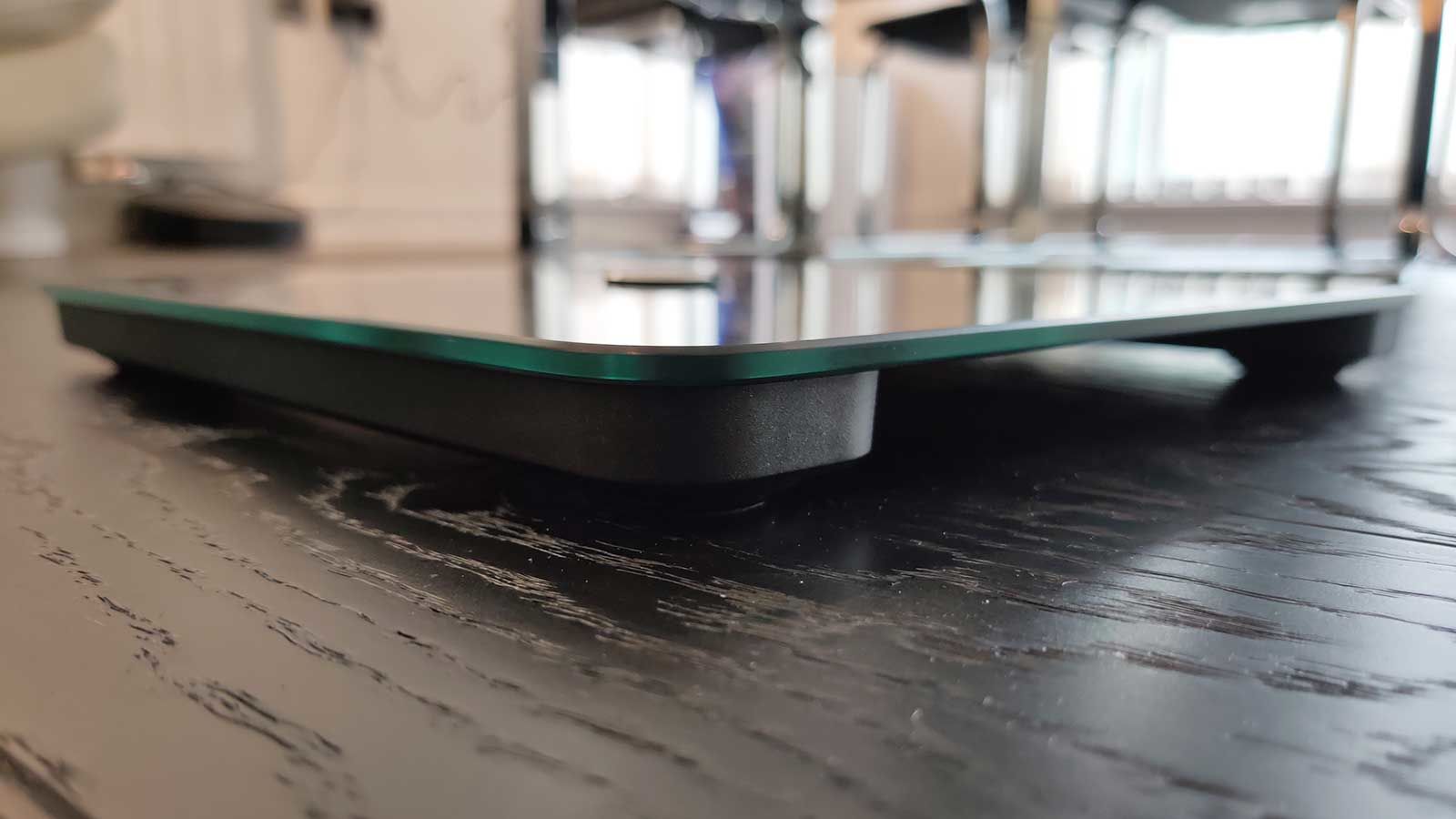 There are a few downsides to the P1 – no Wi-Fi, no recharging, and no carpet support – but these are really the sort of premium touches that most people won’t be worried about.

If you want a simple smart scale that will track the core metrics in an easy-to-use app, can cover your whole family, and will sync up to the Google and Apple apps, there’s really no reason to spend more than this. On the other hand, there’s also little reason to opt for the P1 over Eufy’s own cheaper models, which will let you save a bit of money and only miss out on measurements that you don’t really need.