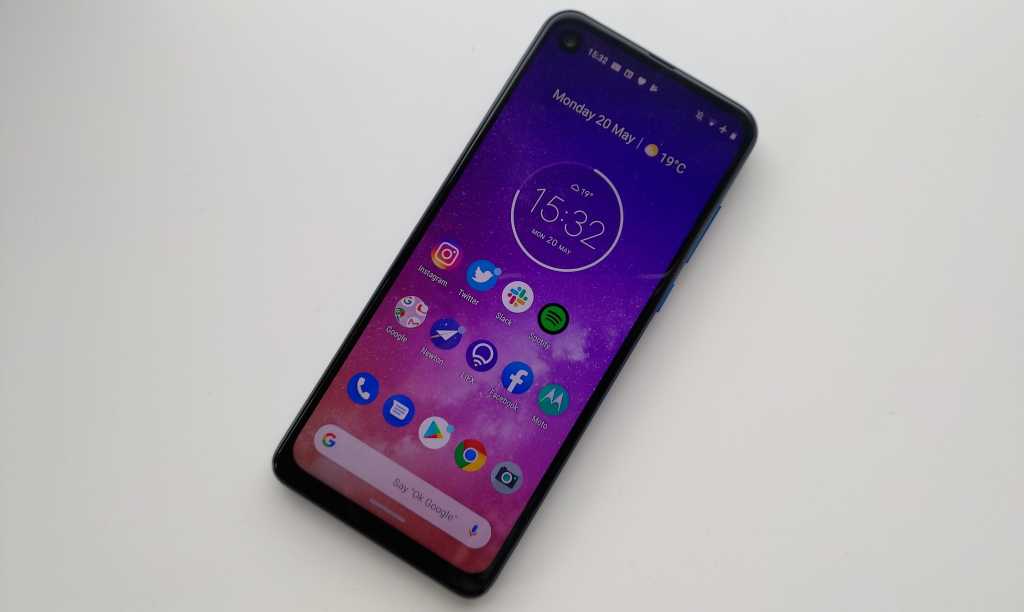 Motorola has proven itself to make excellent phones at affordable prices and the One Vision appears to be no exception. This is a gorgeous device with some specs and features you wouldn’t expect for under £300 including a decent screen and a 48Mp camera.

The Motorola One Vision is a sleek bit of kit with an impressive display, great cameras and a price tag of less than £300, making it appealing in a market where flagship devices can cost upwards of £1000. Motorola claims that the One Vision brings flagship specs to the mid-range, and while that’s correct on the spec front, does it truly perform like a flagship?

We’ve spent some time with the Motorola One Vision, and here’s what we think of the attractive mid-ranger.

Despite the high-end design and impressive feature set, the Motorola One Vision only costs £269 in the UK and 319 Euros in Europe via the Lenovo website. And the good news is that while it was a Lenovo Store exclusive at launch, the mid-ranger has since become available on the likes of Amazon too.

Sadly, it doesn’t look like US fans will be able to get their hands on the One Vision anytime soon. There’s also the One Action.

Fear not, take a look at our selection of the best mid-range smartphones for other great options!

The Motorola One Vision is a stunning smartphone, especially when you consider the mid-range pricetag. It’s a gorgeous combination of glass and metal, sporting a full glass front and rear with a metal band and giving it a premium look when compared to similarly-priced products on the market at the moment.

The rear sports contoured glass that has been rounded on all sides, allowing the phone to fit the curves of your hand for comfortable use. That even extends to one-handed use, as the combination of contoured glass and a tall 21:9 aspect ratio display means it’s tall, but not very wide. In fact, Motorola claims that it has the width of a standard 5.7in smartphone while managing to fit in a 6.3in display. And despite being fairly tall at 160.1 x 71.2 x 8.7mm, the phone weighs a relatively lightweight 180g.

The glass on the rear is the first in the Motorola range to sport a new finish that gives the rear the illusion of depth, with a lighter colour around the edges and a deeper, darker colour towards the centre. It’s slick, eye-catching and, we think, really enhances the overall look of the mid-range smartphone. The only disappointment is that it’s only available in two variants; Sapphire or Bronze, aka Blue or Brown.

There’s a noticeable camera bump on the rear, but despite sporting two sensors, it’s not technically a dual-camera setup – but we’ll go into more detail about that below. Next to the camera, you’ll find a rear-mounted fingerprint scanner with Moto branding that works incredibly well, as one would expect from a fingerprint sensor in 2019.

It’s powered by USB-C, and you’ll also find a headphone port along the top too. What’s not to like?

The centrepiece of the Motorola One Vision is undoubtedly the bright, crisp 6.3in CinemaVision display, boasting a FHD+ (1080 x 2520) resolution that equates to a pixel density of around 432PPI.

It’s also one of few smartphones in the market that boasts a 21:9 aspect ratio, which allows you to ditch the black bars on ultra-wide Netflix and YouTube content. It’s clear that this smartphone is aimed at those who watch TV and movies on their mobile devices, and according to Motorola, that’s a growing number of us.

The use of a holepunch camera in the top-left of the display means that there is no notch present on the One Vision, and although there’s still a noticeable chin and forehead, it still boasts a decent screen-to-body ratio of around 82 percent.

It’s worth mentioning that the holepunch camera cut-out is larger than that of the Samsung Galaxy S10, and despite using phones with notches for quite some time, we couldn’t ignore the camera in the same way. It does remain a cheap way to ditch the notch without sacrificing that all-important front-facing camera, though.

The design and features of display puts the One Vision up against high-end rivals, though it’s worth noting that the display features IPS tech, rather than the crisp OLED favoured by other manufacturers.

That may be a deal breaker for some, but there have to be some sacrifices when putting together a mid-range smartphone, and we’re confident that the average smartphone user won’t notice the difference between the two – it’s bright, clear and crisp with great colour reproduction, making it perfect for catching up on the latest YouTuber vlogs.

It’s not just the display that stands out from the competition; the camera setup is surprisingly impressive for a device that costs less than £300. The headline features are a 25Mp, f/2.0 front-facing selfie snapper and a whopping 48Mp, f/1.7 camera on the rear, complete with OIS (similar to the OnePlus 7 Pro) and a range of shooting modes, but there’s more to it than that.

The highlight of the camera setup is the inclusion of Quad-pixel technology, known in photo and film circles as pixel binning, and explains why the smartphone has such high-res cameras. As the name suggests, the sensor combines four pixels into one to increase not only the amount of detail captured, but light too, providing well-lit, detailed photos even in challenging situations.

There’s also a dedicated Night Vision Camera mode that allows you to take great images in the dark, utilizing the quad-pixel tech alongside AI to improve the final image. It’s not exactly Google Pixel 3-level quality, but it can help shine a bit of much-needed light to photos in dark environments, although with sacrifice to detail.

In place of a depth sensor, you’ll find a secondary 5Mp camera sensor on the rear. The secondary sensor is used to detect depth in images, and is used in conjunction with the phone’s Portrait mode with impressively accurate results – in well-lit environments, anyway.

We don’t think the focus is as accurate as laser autofocus-enabled smartphones in low light environments, but that’s a small sacrifice for a phone at this pricepoint.

So, how do the photos look? While images captured on the Motorola One Vision are detailed enough on the surface, zooming in will more than likely reveal soft details. Take the image of St. Pancras hotel as an example; while it looks detailed and well exposed, zooming in highlights the use of a slightly over-aggressive noise reduction algorithm. It makes it hard to pick out smaller details, like pavement slabs and road signs, and reduces overall image quality if you decide to crop it.

We’ve also found that the One Vision struggles to accurately capture colour, especially when used with HDR, often presenting your high-resolution photos in a rather washed-out hue. Take the below image as an example; the detailing of the building looks rather flat and dull.

But with that being said, the One Vision has the potential to capture some awesome shots – especially with features like Cinemagraph and Spot Colour at your disposal – you’ll just have to be prepared to take a few snaps and get creative with it.

In terms of video, the Motorola One Vision has the capabilities to record up to 4K@30fps on the rear, but with no OIS or EIS present, videos can come out looking a little shaky. Dropping the quality down to 1080p (at 30- or 60fps) provides stabilization to your videos, giving them more of a cinematic look, although it doesn’t quite compare to the smooth videos shot by higher-end smartphones on the market.

Not a powerhouse, but it’ll do

Under the hood of Motorola’s latest smartphone, you’ll find a 2.2Ghz Samsung Exynos 9609 processor alongside a Mali G72 GPU and 4GB of RAM. You’ll also find 128GB of Ultra-Fast Storage (UFS) as standard.

That’s not exactly flagship-level, at least in terms of numbers, but we’ve not noticed any form of lag when scrolling through social media and playing casual games during our time with the Motorola One Vision.

In terms of the actual numbers, the One Vision scored 5342 in Geekbench 4 multi-core, putting it in-line with other budget phones including the Honor 20 Lite and Xiaomi Mi 8 Lite. It’s a similar story with GFXBench results, offering an underwhelming average of 35fps in T-Rex, and dropping down to 5fps with the high-end Aztec Vulkan High benchmark.

It confirms what many assume; it’s enough to handle basic games and apps without breaking a sweat, but those who want the best experience may want to look elsewhere. Take a look at our full benchmark breakdown below:

Battery life is an area where the mid-ranger excels, offering a 3,500mAh battery that should provide most users with all-day battery life. But if you’re a power user that uses your phone all day every day, you might need a little top-up to get you through. The good news is that if that does happen, 15W TurboPower charging should provide you with around seven hours of use after only 15 minutes of charge time.

In terms of software, the One Vision offers Android 9 Pie out of the box, but thanks to Android One support, the phone will receive not only two years of Android updates but three years of security updates too. That’s certainly an attractive feature for a smartphone of this price.

Being a Moto phone, you’ll also find a range of Moto Experiences that allow you to quickly capture images, turn on the torch with a flick, take a screenshot with three fingers and more. These are all optional and can be toggled on or off via the Moto app (the only branded app installed on the smartphone).

At less than £300, the Motorola One Vision is certainly appealing. Aside from an eye-catching design and a rather unique finish that gives the Vision a high-end look, the phone sports a decent array of tech.

The FHD+ 6.4in display is gorgeous and the 21:9 aspect ratio is perfect not only for those that enjoy ultra-wide movies on Netflix, but for those with small hands too. And while it’s not perfect, the 48Mp rear-facing camera is capable of taking decent images, especially when used in conjunction with one of the phone’s many shooting modes.

If you’re a media-driven, snap-happy kind of person on a budget, the Motorola One Vision may be the right choice for you.