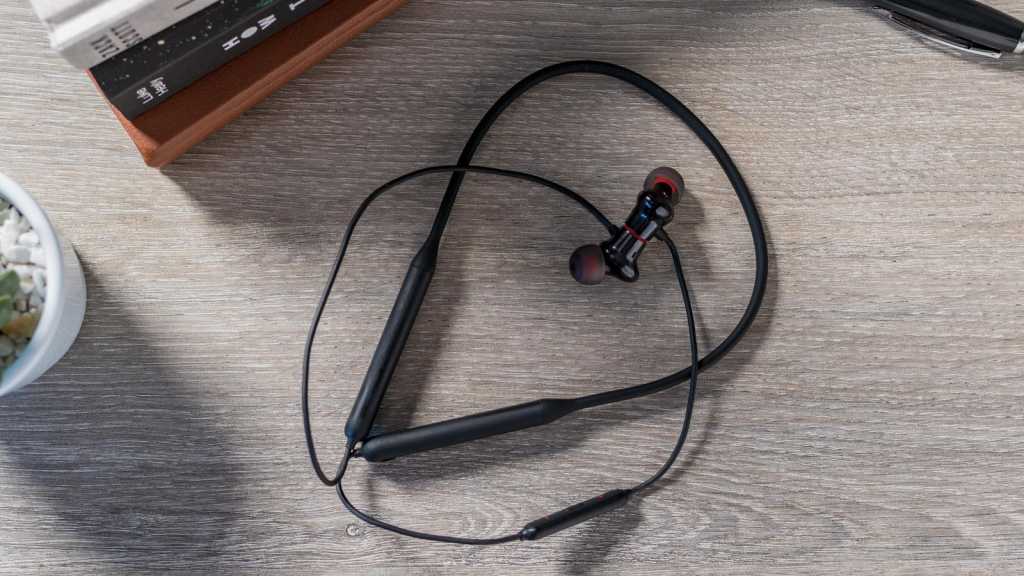 It’s clear that OnePlus has upgraded its wireless headphones to offer better sound and Warp Charge will no doubt come in very handy for a lot of users. They do cost more though and competition is tough so it’s not quite as simple this time around.

OnePlus has been steadily making a name for itself over the past few years when it comes to its smartphones, but it’s also been quietly making some surprisingly good headphones at seriously competitive prices.

That trend is continuing with the Bullets Wireless 2, an updated version of last year’s Bullets Wireless that offer better audio, bigger battery, and faster charger – with a bit of a price hike to match.

They cost £99/$99, which is a bit of a jump from the first Bullets Wireless, which were just £69/$69, though there are enough upgrades here that it might be worth the jump for you.

Still, it’s definitely a less competitive price, especially as there are now more and more affordable ‘true wireless’ earbuds – as opposed to this neckband design – and similar neckbuds from trusted audio brands like RHA available for less than the OnePlus option. 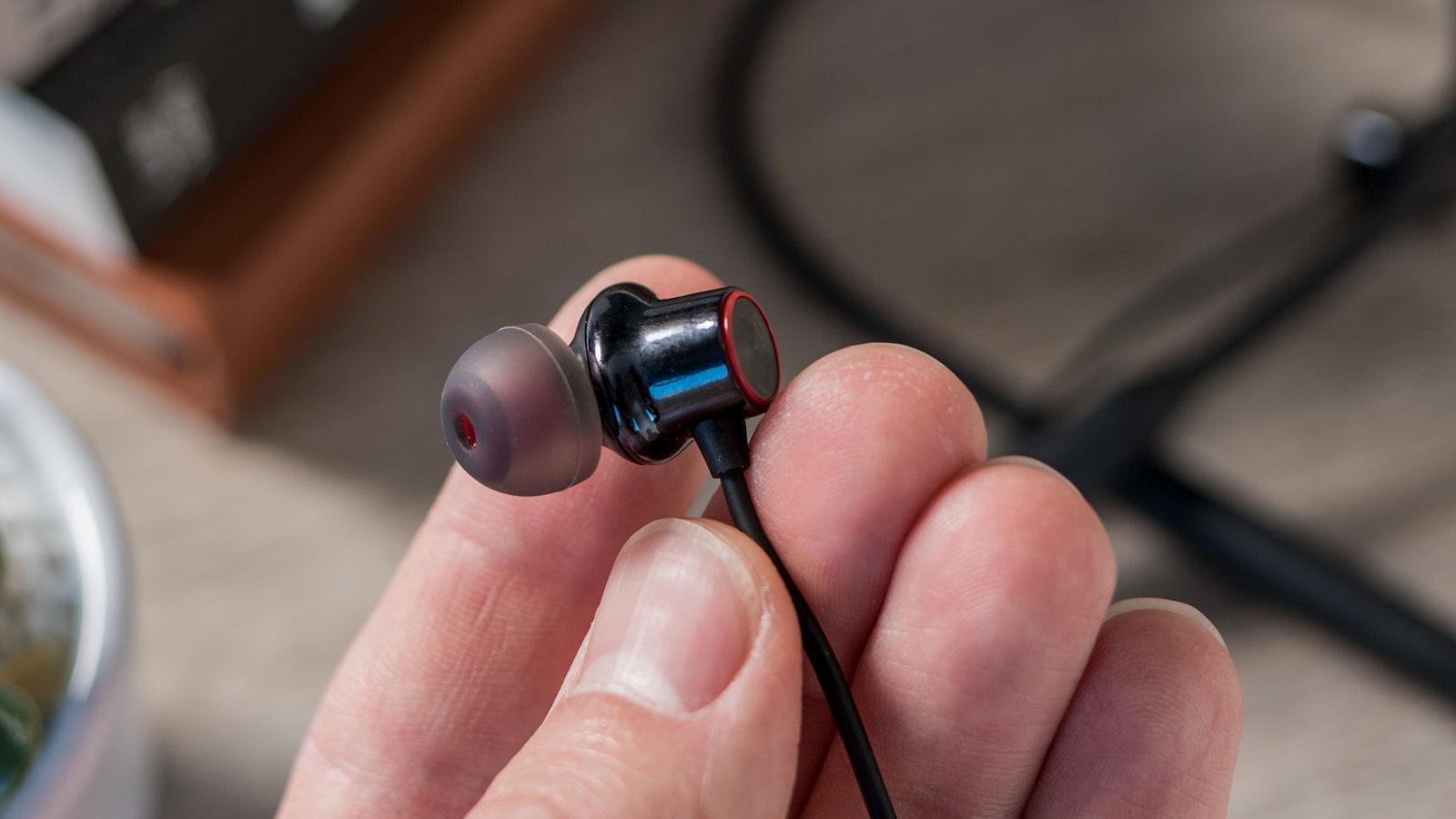 The Bullets Wireless have had a little redesign since their last iteration, with the new ‘Nautilus’ design supposedly inspired by the golden ratio and the Nautilus spiral shell. I’ll admit that I don’t entirely see the connection, but the end result is a pair of sturdy metal earbuds with a sleek, curved design.

The metal construction means there’s a good weight to the design, but there’s a soft touch finish so that they don’t feel cold or unpleasant. They’re also just plain comfortable: there’s a choice of three silicon earbuds to help you find your fit, and once sorted these sit seriously comfortably.

The neckband is a simple black rubber affair, with two larger end points at the bottom – one to hold the battery, USB-C charging port, and a single button, the other simply weighted to balance things out. Then on the left side you also get three-button in-line controls for play/pause, volume, and skipping forwards or backwards.

That one button on the left side isn’t a power button, surprisingly enough. Instead it’s a quick switch, which with a double tap will swap the headphones between the last two connections – ideal if you want to listen to your phone on your commute then switch to your desktop when you get into the office, for example. 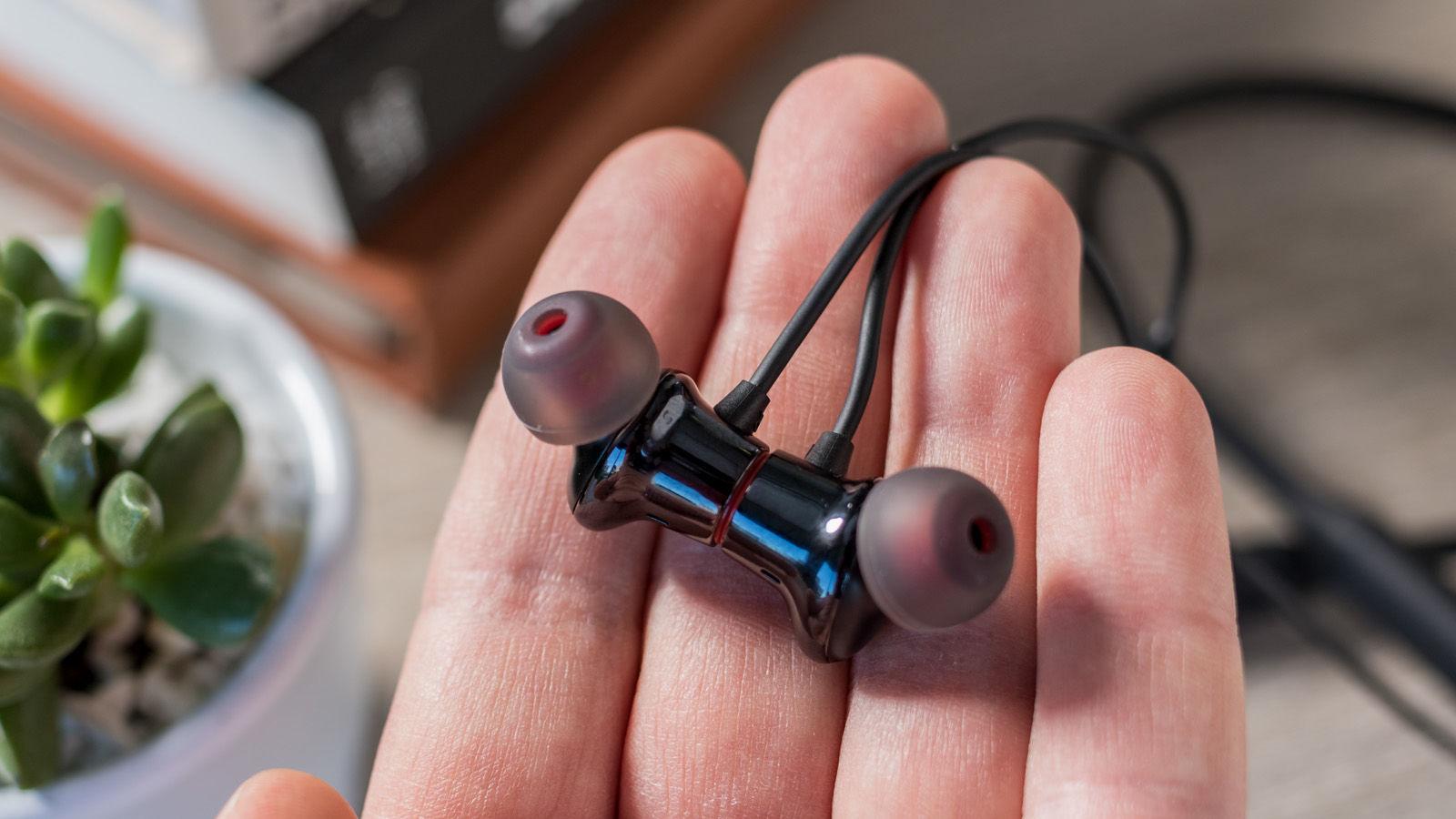 Instead of a power button, the Bullets Wireless 2 rely on magnets inside the earbuds themselves – when they’re clipped together they’re off, and the simple act of separating them both turns them on, and immediately pairs them with the last used device. If you’re on a recent OnePlus phone you can even set it to resume playing music the moment they turn on, saving you any effort at all.

So far this system has worked pretty flawlessly, and the Bullets have turned on and paired every time I’ve pulled them apart. They can of course separate on their own in your bag or pocket sometimes, but they’ll turn off after five minutes of inactivity just in case, in order to save battery. Of course if you set music to auto-play, this will count as activity, and keep them turned on – I had to switch that setting off after the headphones managed to run through half their charge in my pocket without me realising, so take caution there.

While the last set of Bullets Wireless impressed us with their design (and price), their sound was merely good, not great. OnePlus has taken that into consideration here, redesigning the internals to upgrade from one driver to three: two moving iron plates for high notes, and a larger 10mm moving coil to deliver the bassline. There’s also Bluetooth 5.0 and support for the aptX HD codec (with Android devices), which means improved signal quality and stability. 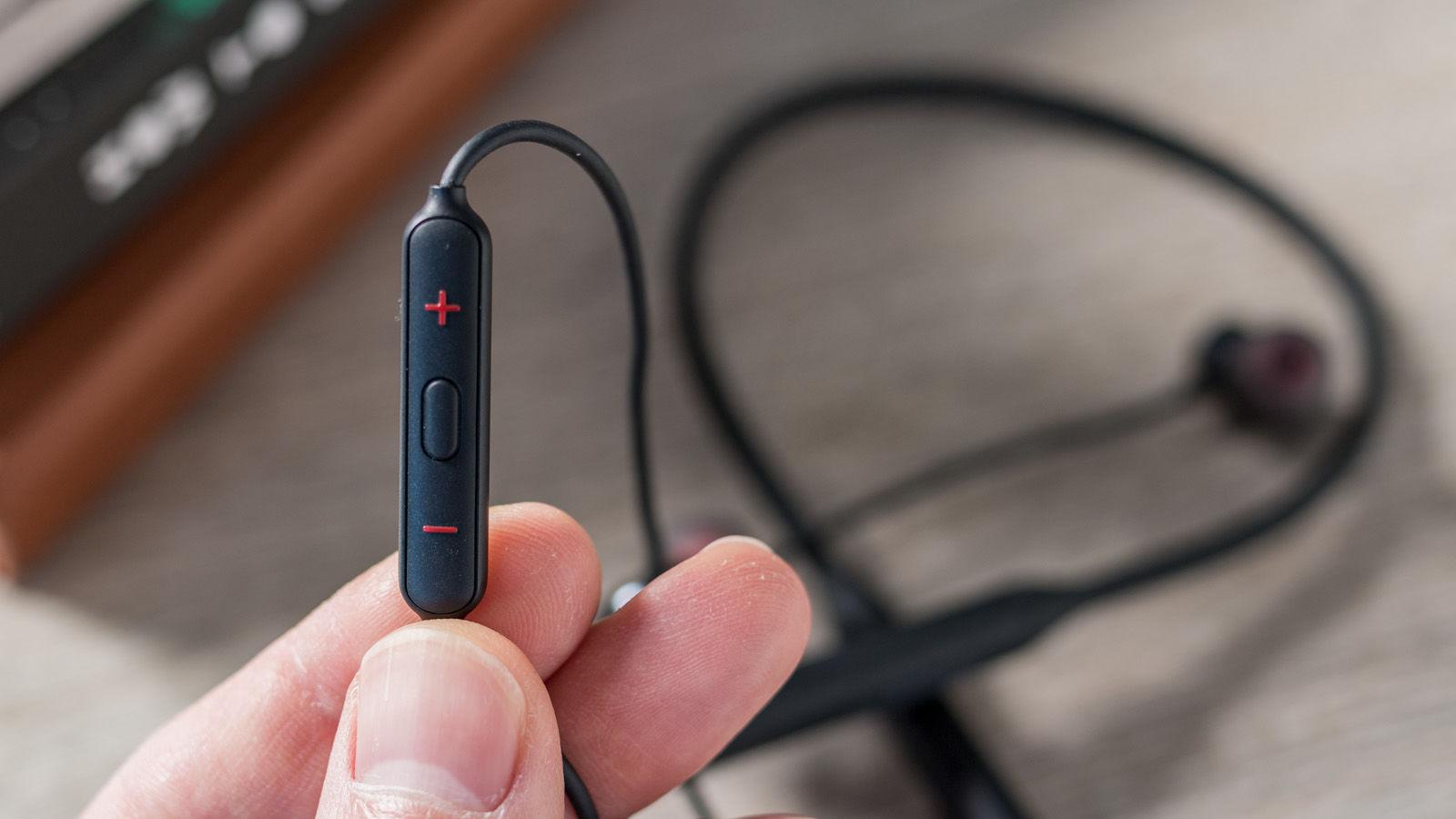 The end result is seriously solid sound. Punchier bass than you’d expect from earbuds at this price is bolstered by clear mids and trebles, and the ability to pump out frankly unnecessary levels of volume if you so wish. The sound profile is fairly flat, meaning it should suit just about any genre well but isn’t designed to excel at any in particular – great for anyone with varied taste, but maybe less so if you know you listen to a lot of bass-heavy dance music, for example.

There’s no active noise cancellation – as you’d expect at this price – but there’s a decent passive effect, or noise isolation, if you take the time to pick the right ear tips and get a good seal.

Pairing is simple, especially if you’re using a OnePlus phone already – in that case just turning the headphones on by separating them will create a pop-up prompt on your phone to pair them. Otherwise you’ll just have to dive into your Bluetooth settings to find them. 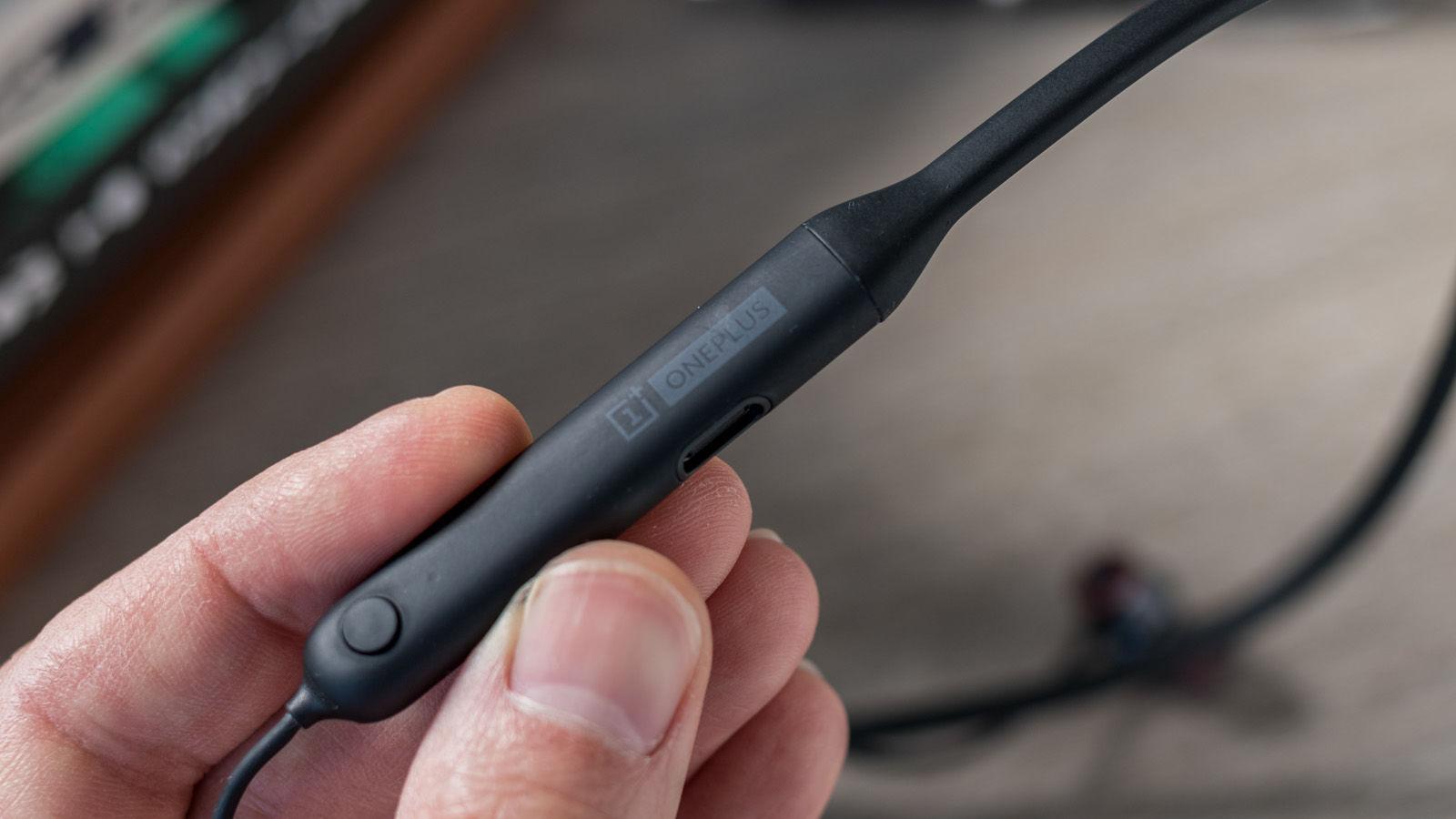 Finally, battery life is another big winner. OnePlus says these will last 14 hours, which I’ll be putting to the test this week. More impressively, the company has crammed in its 30W USB-C Warp Charging, which means 10 minutes of charging from empty will yield a full 10 hours of playback time.

As someone who never, ever pays attention to their headphones’ battery level, it’s hard to overstate what a phenomenal convenience that is when you’re about to leave the house or get on a long-haul flight. The only downside is that it’s fussy about using the official OnePlus charger – connect it to another charger, even one with the same capacity, and you won’t see quite the same charging speeds.

There’s no IP rating (as ever with OnePlus) but there is some waterproofing here. Basically, they should survive some sweat or a bit of rain, but we wouldn’t wear them in the shower.

At £99 these aren’t quite the slam-dunk easy sell that the first generation headphones were, but there have been enough improvements in design, battery life, and audio quality to justify that jump. Competition at this price point is tougher, but the Bullets Wireless 2 still hold their own, and are a great buy whether you use a OnePlus phone or not.