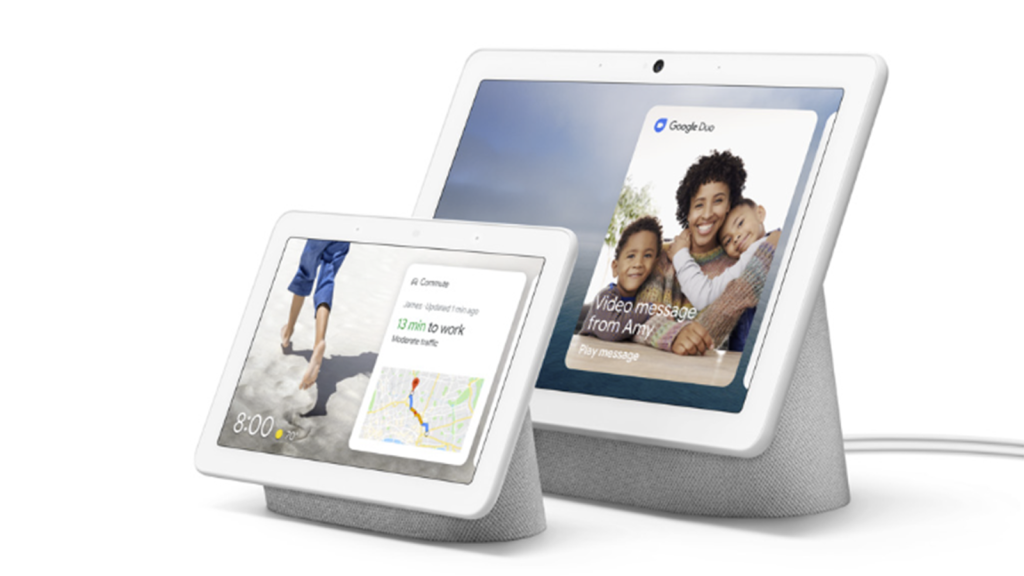 Google Nest Hub Max is £100 more expensive than its smaller sibling, but with 10 inches of screen space it’s a lot more useful for watching YouTube videos and following recipes in the kitchen. It also has better audio firepower – a weak spot for the smaller Hub – and the addition of a camera that unlocks some fantastic new functionality not seen before on Google smart speakers. We recommend the new Nest Hub Max as the better buy, but if your budget won’t allow for it the smaller Nest Hub still makes for an excellent buy.

Now re-branded from Google Home Hub to Google Nest Hub, Google’s 7in smart display has a new bigger brother in the Google Nest Hub Max ( reviewed here). Announced today at Google I/O, it is not only larger with a 10in screen but adds improved speakers and new functionality with an integrated camera.

Both are smart displays with integrated Google Assistant, which means the majority of the features are the same. There are five key differences, as we’ll outline below.

Google Nest Hub is available now, and will be reduced from £139 to £119 in response to the launch of the newer model.

You’ll be able to buy the Nest Hub Max from Google, Argos, Currys and John Lewis in the UK. Elsewhere, the Hub Max will be available in an additional 12 countries, including Canada, Denmark, France, Germany, India, Italy, Japan, the Netherlands, Norway, Singapore, Spain and Sweden.

Nest Hub Max comes in just two colour options: Charcoal and Chalk. The smaller model additionally comes in Aqua and Sand. The design is otherwise largely the same, though the Max also features a physical switch for its new camera.

The original Hub has a 7in screen, while the new Nest Hub Max has a 10in display. It’s still an HD (720p) panel, though this seems sufficient for most uses.

The extra screen space should make it more practical for using to view news broadcasts and YouTube videos, follow along with recipes and more, all without squinting.

With more room inside the chassis, thanks to the larger screen, Google Nest Hub Max also has room to improve the audio. We felt audio was a weakspot for the original Hub, not loud enough to fill a room and a little tinny. Nest Hub Max should improve on this with its 2.1-channel setup.

The new Google Nest Hub Max also integrates a camera, which was previously left out of the Hub due to privacy concerns. However, Google has introduced a physical switch to turn off the camera, and has added an LED that lights up green when someone is monitoring or recording the camera’s view.

It has also made promises about disclosing any hardware that is capable of monitoring a user, and being more transparent about what it does with any data collected.

With the new camera you can make use of additional functionality on the Nest Hub Max:

The Google Nest Hub Max was announced at Google I/O 2019 alongside the  Pixel 3A and 3A XL, and the third beta of  Android Q.