While the Google Hub wasn’t a true contender for the smart display crown long-held by Amazon’s second-gen Echo Show, the Google Nest Hub Max could change that. Boasting a larger display, a webcam that doubles up as a security camera and other features unique to Google’s offering, the Hub Max could steal the Echo Show’s crown.

Here, we break down the key differences between the Google Nest Hub Max and Amazon Echo Show, including pricing, design and features alongside the capabilities of both Google Assistant and Amazon Alexa.

The newly-announced Google Nest Hub Max is set to be released on 15 July 2019 around the world, costing consumers £219 in the UK and $229 in the US. You can join the waiting list now.

While the Hub Max isn’t due out until July, Amazon’s Echo Show is available to buy right now with an RRP of £219/$229. You can pick it up from Amazon, Currys, John Lewis and other UK retailers alongside Amazon and Best Buy (at a discounted $179.99) in the US.

While the first-gen Echo Show was a fairly ugly and bulky device, Amazon’s second-gen Echo Show boasts all-round improvements, not only in terms of design but specs too. The Echo Show sports a fabric touch similar to that of the Google Home Max and HomePod speakers, with the large 10in display taking centre stage. It boasts dual 2in speakers in the main body, producing sound from the sides, while a rear-facing bass radiator handles the lower tones.

The Google Nest Hub Max offers a very similar design to the Echo Show, with a 10in display taking up the majority of the front panel, but the screen isn’t flush with the surface it’s placed on like Amazon’s offering. Instead, you get a peak of the stand/speaker array, covered in the same fabric found across Google’s smart home range. 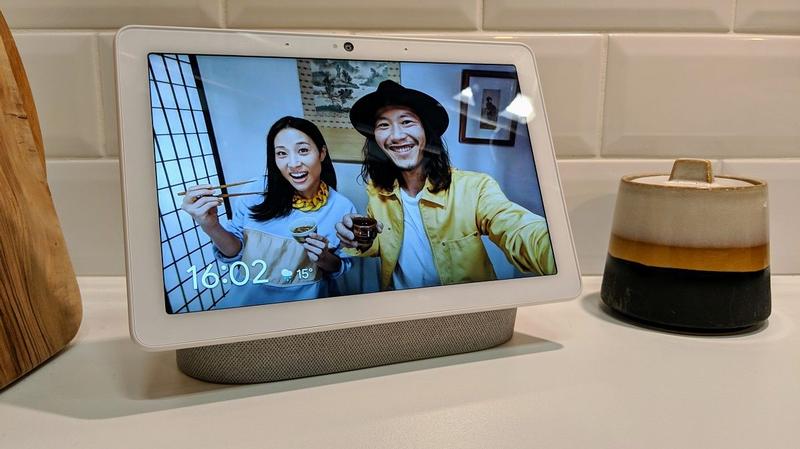 It’s available in chalk and charcoal, like the standard Google Nest Hub (formerly known as Google Home Hub), and provides a much-needed flash of colour to the mainly white setup. Like Amazon’s offering, the Google Nest Hub Max features dual speakers and a rear-facing bass radiator to pump out your favourite tunes.

Both smart displays feature cameras, but these are used for slightly different purposes – we’ll go into more detail about that below. The privacy-conscious will be happy to know that the Hub Max sports an LED that lets you know whenever somebody is connected to the camera, and while a similar function isn’t present on Amazon’s offering, both devices allow you to simultaneously disable microphone and camera input with the touch of a button.

And it’s probably worth mentioning that while these look like tablets, there’s one significant difference; both require mains power to run, and neither are particularly portable. Once they’re plugged in and set up, that’s how they’re staying. 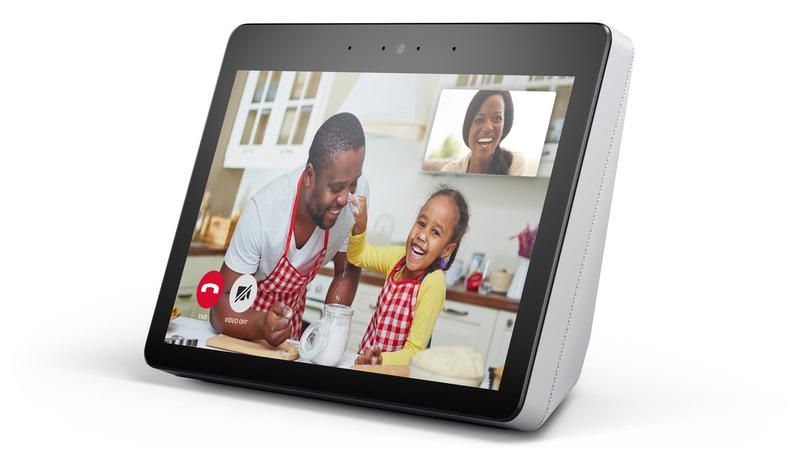 While the Amazon Echo Show and Google Nest Hub Max boast a similar design, the same can’t be said for the internals and features on offer. Let’s start with the displays; both the Echo Show and Hub Max sport a 10in display, although Google’s offering is capped at 1280 x 720 (HD) while the Echo Show boasts a Full HD (1080 x 1920) display. While the difference between HD and FHD wouldn’t be noticeable on smaller displays, images may appear a little softer on the Hub Max’s 10in display.

With that being said, the Hub Max does offer the ability to adjust the tone of the display based on lighting in the environment it’s in, something not offered by Amazon’s higher-resolution smart display. 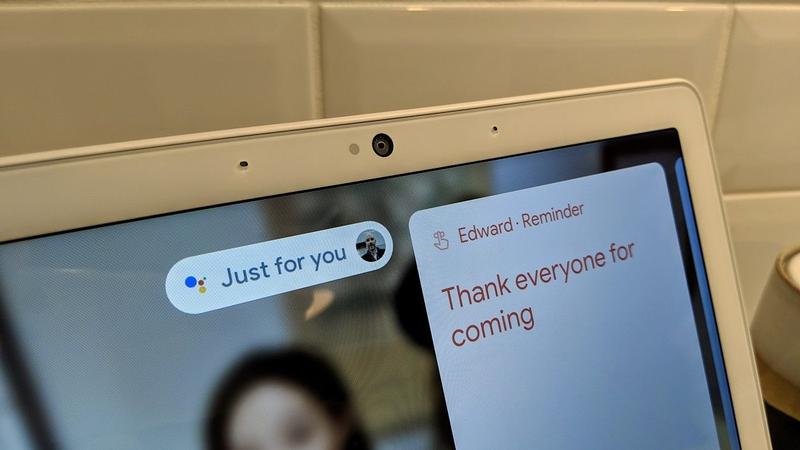 As mentioned above, both feature a webcam embedded above the display, but the functionality varies between the two devices. The Echo Show’s webcam is used exclusively for drop-ins and video calls with other Alexa users, and while the Hub Max boasts auto framing when used with Google’s video calling service Duo, there’s much more to it than that.

Thanks to a partnership between Nest and Google, the 127-degree wide-angle camera doubles up as a security camera for your home, complete with recording capabilities, accessible via the Google Home or Nest apps for iOS and Android. The catch? It’s not free, and to enable full security functionality, you’ll have to subscribe to Nest Aware.

Still, it’s a unique double use for a smart display, and one that security-focused consumers will appreciate.

Another unique feature of the Hub Max is facial recognition; thanks to the wide-angle camera and built-in smarts, the Hub Max can recognise up to 6 users and provide a personalised experience for each. It’s an optional service that builds upon the already impressive voice recognition tech that Google employs across its smart home range. It’s also something that Amazon’s Echo family is sorely missing, as Alexa provides generic results regardless of who is interacting with it.

While that’s all well and good, what it truly comes down to is the Assistant you prefer; Alexa or Google. Admittedly, the two assistants have a broadly similar skillset, but there are a few unique features that set them apart.

The Hub Max sports Google Assistant support, which is hugely beneficial for Google users (especially Android fans) as the Hub Max will provide useful and accurate information like traffic on your commute, upcoming meetings and delivery notifications using data from your Google account.

It’s certainly a more streamlined and personal service than what Alexa offers, as most users will have to set everything up from scratch during setup – simply put, Amazon cannot compete with the OS-level connectivity on offer from Google. It’s also worth considering the platforms your friends and family use, as a Google device can’t connect to an Amazon device and vice-versa. 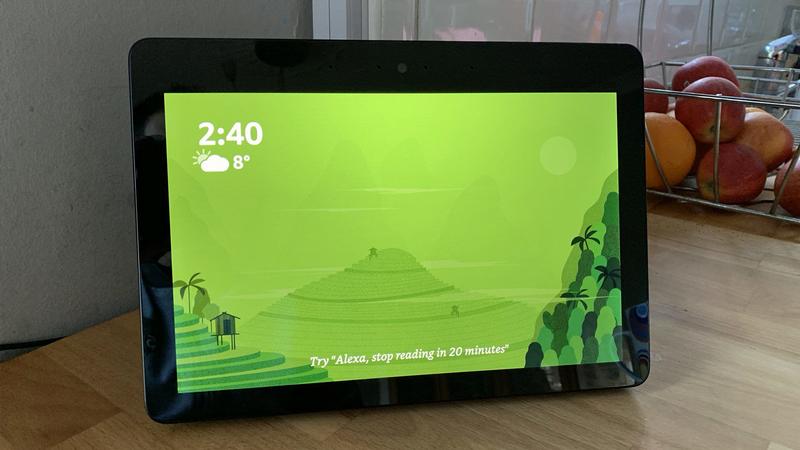 Alexa, on the other hand, offers support for thousands of community-created skills. These can be found via the Alexa app for iOS and Android, and can extend the functionality of the virtual assistant, whether that’s by hooking up your Ring doorbell or making Alexa fart on command.

While Google offers built-in support for specific services like Spotify and YouTube (an app exclusive to Google hardware), it’s Alexa that offers a more customisable experience – for those that want to take a deep dive into the world of Alexa Skills, anyway.

For more information on the smart assistants, take a look at our separate Alexa and Google Assistant guides.

The Google Nest Hub Max looks like a true competitor to the long-established Amazon Echo Show, offering a suite of standard smart home capabilities alongside unique security camera functionality. We’ll be sure to deliver a final verdict once we’ve spent more time with both smart displays.