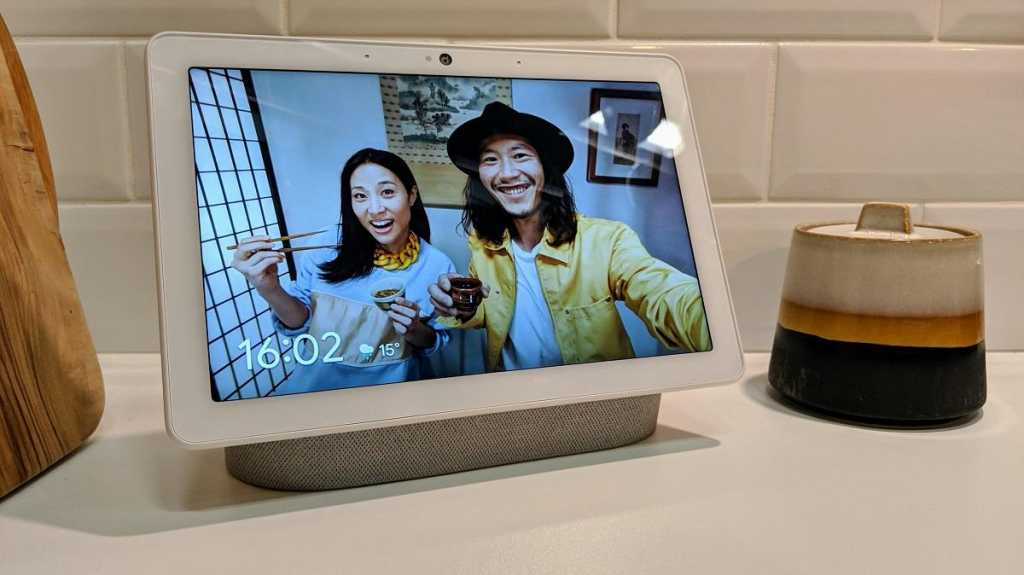 It might only be available in two colours but Google has brought the two things we asked for to the Nest Hub Max – a larger screen and a camera. That camera can do a lot more than make video calls, too and we have very little to complain about with this smart display.

Smart home is an increasingly popular area of technology and Google has updated is smart display to be bigger and better. Now branded with the Nest name, here’s our full review of the Nest Hub Max.

We loved the Home Hub when and still do, but it was a shame that Google didn’t offer a larger option with a built-in camera. Well that’s exactly what the Nest Hub Max offers so we’re rather pleased.

Before we begin, it’s worth explaining that the branding is now ‘Google Nest’ with the two coming together. Google has owned Nest for five years now and thought it was about time to use the names together. The Hub Max combines Google and Nest technology so it makes sense, apart from the slightly lengthy product name.

After a delay, the Nest Hub Max is available to buy from Google.

It’s perhaps no coincidence that the Hub Max price is the same as its key rival, the Amazon Echo Show 2. There are also other rivals such as the JBL Link View and Lenovo Smart Display, both of which are more expensive.

Check out our chart of the best smart displays.

As you might expect, the Nest Hub Max is essentially just a super sized version of the regular Home Hub.

So the headline here is that you get a larger screen. It’s 10in vs 7in but feels like a bigger jump in real life. The original suddenly looks tiny in comparison. The 10in display gives you a nice amount of extra real estate to see what you’re doing, especially handy if you want to view the Hub from a distance across the room.

The firm has stuck with the same style and combination of materials including fabric. The idea is that it’s like a floating display you can place almost anywhere in the house. It’s simple and elegant so didn’t really need changing, although smaller bezels around the screen would make it look more modern.

On the back is just a volume rocker and a switch to deactivate the microphones and camera in one go. An LED indicates whether things are in use or not so know if someone is viewing via the camera, for example.

The larger base also means more room for speakers, which we’ll talk about later.

This time around there are only two colours to choose from: Chalk and Charcoal. That means you can’t get one to match your Sand or Aqua original Hub if you have one but these colours will easily fit with any room.

We asked for a bigger screen and we got it. This 10in display, as we’ve mentioned, feels huge compared to the 7in Nest Hub. It’s great if you want to watch a lot of video or didn’t even buy the older one because of it’s small size.

The display has an HD resolution (1280×720) which isn’t that high for a modern device so we’d prefer Full HD but it somehow doesn’t look that bad either. The ambient EQ light sensor remains so the screen can automatically adjust to the conditions.

It helps the screen blend into the background a little rather than standing out, giving is a slightly glossy magazine quality rather than looking a pixelated display. It is of course, touch sensitive so you can interact with your finger instead of just voice.

The other key thing here is the introduction of a camera, and there’s a lot more to it than just being able to make video calls.

Video calls are a key element though as you can use Google Duo to call friends and family and also leave video messages. Google says “Non-Duo calling can make outbound calls to most numbers in the US and Canada.”

It’s actually a Nest Cam with a wide 127 degree field of vision and has various tricks up its sleeve. For starters it can intelligently follow you around the room if you move by cropping and zooming the image during a video call and this works really well.

Because it’s a Nest Cam you can use the Hub Max like a security camera, logging into it with the Google Home app when you’re not at home. A green LED will show that the camera is being accessed for transparency and a notification will also pop up on the display.

If you subscribe to Nest Aware (from £4 a month) then you can get the camera to record, as well. Note that this camera isn’t able to offer night vision, though. You’ll want to use the Nest app to get the most out of the camera anyway as you’ll get notifications for activity and see snapshots of what’s happened in the last 3 hours.

There are more things the camera can do including being used for gestures like pausing/playing music or videos. Just hold your hand up like you’re trying to stop traffic and it works even at pretty acute angles but isn’t a 100% accurate so sometimes takes a few goes.

The Nest Hub Max is also able to recognise different users with their face – up to 6 different people – so that each person using the display can get a personal experience rather than the display simply be set up for one account. It’s called Face Match and works even from across the room.

With the merging of Google Nest, existing Nest customers will be given the opportunity to swap over to a Google account.

As mentioned earlier, the Nest Hub Max has more space for speakers due to its larger size. So it’s got a 2.1 system for much more oomph than it’s smaller brother. Two smaller drivers face forward while a 3in woofer at the back handles the bass.

It sounds significantly better than the regular Nest Hub and can fill a room even at around five or six out of 10 on the volume scale. You can adjust the bass and treble in the Home app which is nice, but it still can’t match the JBL Link View for audio prowess.

You can play music from Spotify, YouTube Music and Google Play Music – all with free options available. There’s also Deezer but you’ll need the Premium+ subscription.

There’s no need to worry about battery life because the Nest Hub Max plugs into the mains. It’s not designed to be moved around.

Google hasn’t changed the interface for the Nest Hub Max so if you used the original then you’ll feel right at home. It’s a simple and easy to use system which fits with the way Google works on Android smartphones. Content is essentially displayed in cards and you can scroll through using the touchscreen.

Pull down from the top and you can control various smart home products such as lights and heating if you have them (and they’re compatible with Google Assistant. Of course you can also control these with your voice. On the matter, voice recognition is excellent even when loud music is playing and you’re on the other side of the room. The device supports Voice Match so it knows who is talking.

A settings menu is available by swiping up from the bottom so you can control things like the screen brightness and you can also switch the mic and camera on and off individually here.

The Next Hub Max is also a digital photo frame, so can display highlights or people from your Google Photos library which is a really nice way of seeing photos you might rarely have the time to view. If you prefer you can also choose a gallery of curated artwork.

Google has also made the Nest Hub Max a Google Cast device so you can, well, cast content to it. This supports apps like BBC iPlayer, Sky Now TV and BT Sport. For a long time this didn’t include Netflix but the service has been added as of July 2020.

We don’t know what is powering the Nest Hub Max but, as with the smaller Nest Hub, the performance is occasionally a little laggy which is a shame. Luckily it’s not an issue much of the time.

Google has done exactly what we wanted with the Nest Hub Max: made the screen larger and added a camera for Duo video calls.

The camera does a lot more though including gestures, Face Match for different users and the ability to use it as a Nest camera when away from home.

It would be nice if a Nest Aware subscription wasn’t needed for additional features and the camera had night vision but we can’t expect everything.

Sound it also much improved so we’d wholly recommend getting the Max over the smaller model unless you can’t afford it and don’t need the camera.