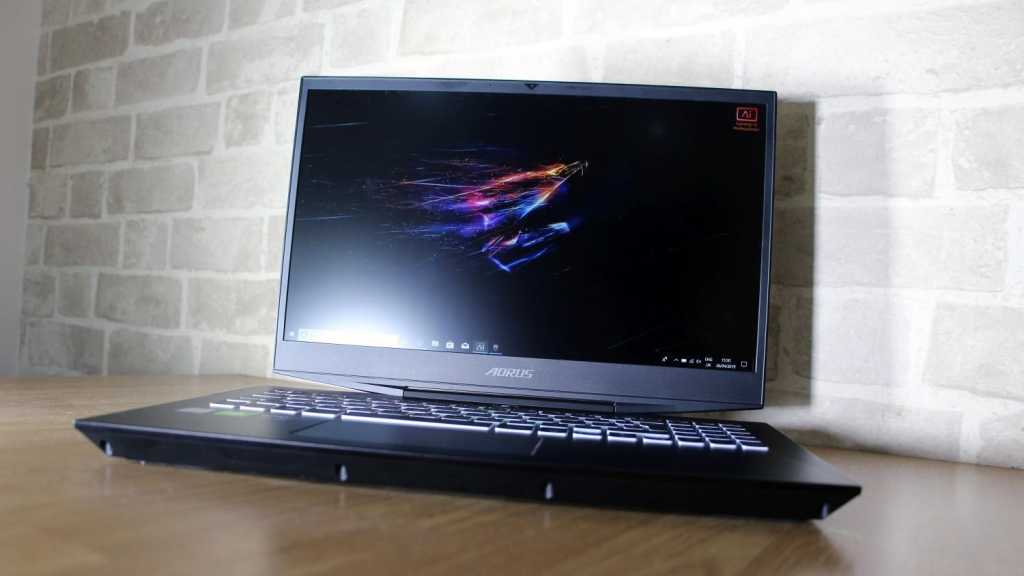 The Aorus 15 X9 suffers from middling build quality, could have a better screen and it’s sometimes too loud – but its full-fat RTX 2070 is an impressive slab of gaming hardware. It’s not the best gaming laptop, but it’s worth considering if you want more gaming grunt than most rivals provide.

The latest laptop from Gigabyte’s Aorus brand is an expensive, muscular gaming machine that costs a little more than £2,000.

There’s no shortage of laptops like that elsewhere in the market, though, and many of them are slimmer and lighter than this machine – so can this particular portable stand out?

Price & Where to buy

There’s a cheaper model of the Aorus15 X9 that costs £1,999. It’s got the same specification as the pricier system, but it loses the hard disk – so there’s less space for games.

The cheaper Aorus is actually one of the most affordable RTX 2070 laptops on the market – even more impressive considering it has the full-fat GPU rather than Max-Q hardware. The more expensive one is still good value, as it still undercuts many other RTX 2070 notebooks.

Aorus also sells a laptop called the 15 W9. It has the same processor, memory, storage and screen configuration as the X9, but it has RTX 2060 graphics. Dropping down to the weaker GPU reduces the price to £1,899 and $1,649.

Of course, it’s only a little more to get the cheaper of the two RTX 2070 machines, but that laptop doesn’t have a hard disk.

Check out our chart of the best gaming laptops.

Aorus machines have earned a reputation for outlandish design, even among other gaming laptops – so we’re pleased that the firm has toned it down for the latest release.

It still looks like a high-end gaming machine, of course, but the design touches are more subtle. You get an Aorus logo and a couple of metallic accents on the lid, and slashed air vents around the rear – but that’s it.

The subtler feel continues when the lid is eased open. The power button is small and smart, and sits in the middle of the speaker grille. There are the usual RGB LEDs in the keyboard, and a couple of tiny RGB lights in the corners of the base. There’s nothing more than that.

The Aorus looks similar to the Alienware. That machine also has a single central hinge, slashes on the lid and numerous air vents around the squared-off, imposing base. Razer’s machine is more subtle than the Aorus, with darker design and hardly any extraneous touches.

The extra weight and size won’t be too noticeable if you’re keeping a laptop at home. However, if you’re slinging the Aorus in a backpack to take to a lot of LAN events, then a slimmer and lighter machine could be preferable.

Annoyingly, though, the extra weight doesn’t mean flawless build quality. The base and underside push down a little too much, and that central hinge leaves the screen’s sides feeling wobbly and vulnerable.

The Aorus serves up three USB 3.1 Gen 1 ports and one Type-C connection that uses the faster USB 3.1 Gen 2 protocol and supports DisplayPort. Elsewhere, the Aorus provides an HDMI 2.0 output and a mini DisplayPort 1.3 connector alongside a micro SD card slot.

It’s a similar port selection as the Alienware and the Razer, although the latter does include more USB 3.1 Gen 2 connectivity if pick a brand-new Intel 9th-gen model.

On the inside, you get Killer-branded 802.11ac wireless and Gigabit Ethernet alongside Bluetooth 4.2.

The Aorus 15 X9 has a conventional chiclet unit with per-key RGB lighting. The keys are not bad at all. The individual buttons have a reasonable amount of travel and snap, and they’re sturdy and consistent – so they feel fast and firm.

They’re easily good enough for mainstream gaming in all sorts of genres, and for esports and typing. And, as an added bonus, they’re reasonably quiet.

The Aorus’ keyboard is good, but the Alienware is a little better – it’s faster and firmer. The Razer keyboard can’t match up either unit, though, as its buttons are too shallow and light.

As ever, this chiclet unit doesn’t compare to a true mechanical experience. Also bear in mind that the Aorus has some layout quirks: the numberpad keys are narrow and the cursor buttons are very short.

The trackpad is very wide, and its built-in buttons are acceptable for casual gaming – they’re fast to respond, but they push down too far. If you’re serious about gaming, use a USB mouse.

The Aorus has a 15.6in, Full HD screen with a 144Hz refresh rate, but there’s no Nvidia G-Sync. That’s the same base specification as the Alienware. The inclusion of a 144Hz refresh rate means you’ll get impressively smooth gaming at 60fps and beyond, with better results delivered at higher framerates. However, laptops with G-Sync will still be that little bit smoother.

This is one area where the Razer offers more versatility. The Blade 15 is available with Full HD screens at 144Hz and 240Hz, or with a 4K touchscreen at 60Hz.

The specification good, and the colour levels are excellent. The temperature of 6,539K is fantastic – barely different from the 6,500K ideal – and it means that colours are rendered without being too chilly and oversaturated. The screen had a superb Delta E of 1.72, which means human eyes won’t be able to notice any deviations.

The Aorus handled 89.3% of the sRGB colour gamut. That’s solid, especially when combined with those other excellent scores.

A brightness level of 269cd/m2 and black point of 0.3cd/m2 are mediocre, though, and they create a middling contrast ratio of 897:1.

The brightness level is good enough to cope with bright lights, but the middling black level means that darker areas won’t look as deep as they do elsewhere. The contrast ratio also means that images don’t have as much punch as they do on rival screens.

The contrast results mean games lack a little bit of depth, but the results aren’t disastrous and colours are still accurate. The Aorus’ panel is still easily good enough for gaming.

The speakers have a reasonable high-end and even a little bit of bass present, but the mid-range is weak. If you’re a committed gamer, a headset will be far better.

The full-fat mobile RTX 2070 delivers a significant boost when compared to the Max-Q version that’s included in the Alienware and Razer machines – and in most other notebooks with the RTX 2070 elsewhere in the market.

You still get the RTX 2070’s 8GB of GDDR6 memory and 2,304 stream processors, and there’s enough extra grunt here to deliver a solid performance boost.

The Aorus rattled through Total War: Warhammer II with an average framerate of 82fps, and it handled the trickier Ghost Recon: Wildlands at 57fps. They’re excellent scores, and easily enough to ensure smooth, playable framerates in even the toughest games. It’s also enough power to handle games at framerates that are high enough to take advantage of the 144Hz screen.

The full-fat RTX 2070 was around ten frames faster than the RTX 2070 Max-Q in Warhammer II and almost ten frames quicker in Ghost Recon: Wildlands. It’s not enough to totally transform gaming, but it’s a decent boost that’ll keep framerates higher for longer.

And, because the RTX 2070 uses Nvidia’s Turing architecture, it means you get Ray-Tracing and DLSS. The former technique improves light and particle rendering but is computationally expensive, while the latter uses AI to make anti-aliasing more efficient – clawing back some of that performance deficit.

We tested these techniques using Metro: Exodus. Without ray-tracing, the Aorus played the game at Ultra settings with a smooth average of 57fps. With ray-tracing but without DLSS, that score dropped to 48fps – still easily playable. Adding DLSS brought the score back to the same level as that initial test.

There’s clearly enough speed here to handle Nvidia’s new techniques at 1080p, and the Aorus will have more headroom than the Alienware and Razer machines when it comes to running them smoothly.

The gap between the different versions of the RTX 2070 can be seen in theoretical tests. The Aorus scored 37,362 points in the 3D Mark Sky Diver benchmark. The RTX 2070 Max-Q is typically a few hundred points behind.

The familiar Core i7-8750H processor serves up six Hyper-Threaded cores with base and Turbo clocks of 2.2GHz and 4.1GHz. It’s the same chip used by Alienware, and in older versions of the Razer.

The Aorus’ Geekbench multi-core result of 19,446 beats the Razer but falls behind the Alienware, which had 32GB of memory. It’s an entirely expected result, and it means that the Aorus will handle CPU-intensive games, video and photo work and intensive multi-tasking.

Windows 10 Home sits on an Intel 760p SSD, which delivered good read and write speeds of 3,085MB/s and 1,027MB/s. That’s good pace, and it means the Aorus feels snappy and boots quickly – but Samsung’s drives are faster.

The Aorus has plenty going for it when it comes to performance, then, but thermal issues are commonplace in gaming laptops – and the X9 is no exception.

At default settings the Aorus uses its normal fan mode, and its noise output during games sits at the same volume as the Alienware and Razer machines. The problem, though, was the pitch of that noise – it’s higher and more irritating than most other machines.

With this normal fan mode used during gaming, the CPU and GPU hit peak temperatures 81°C and 85°C, which are fine. However, in a full-system stress-test the CPU peaked at 96°C, which is too high.

Activating the Aorus’ maximum fan mode reduced the CPU temperature to an improved 87°C, but that option is horrendously loud – far too loud to game with the laptop’s speakers, and loud enough to prove noticeable through a headset. And, annoyingly, the Aorus often switches to the mode on its own during gaming and during incongruous moments. A tap of the keyboard can deactivate the maximum fan mode, and it doesn’t always activate during games – but it’s still an irritation.

The Aorus’ exterior never became too warm during our tests, but it’s not a clean bill of health for this machine when it comes to thermal tests.

The Aorus 15 X9 includes a 62Wh battery. That’s a tiny bit less than the Alienware and Razer power packs.

Our standard battery test loops a 720p video file with the screen at 120cd/m2 brightness, and in the Aorus’ default high performance battery mode the machine lasted for two hours. In Windows’ own balanced power mode, the Aorus added about half an hour to that result.

Neither result is half as good as the Alienware, and the Razer lasted a little longer too – but they’re still pretty normal results for a powerful gaming laptop.

Don’t expect much when gaming, either. With the screen turned up and a demanding title running the Aorus lasted for around an hour. If you want to run games or do anything else on this laptop for any significant length of time, then, you’ll need to stick closer to the mains.

The full-power RTX 2070 is the start of the show. It’s got enough power to play anything at 1080p, and enough ability to handle the 144Hz screen and Nvidia ray-tracing. It also opens a solid lead over the RTX 2070 Max-Q included in most rivals.

Elsewhere, the Aorus has a solid CPU, good memory and storage and a screen with acceptable quality. The keyboard and trackpad are decent, and the Aorus looks attractive and smart.

This machine does have issues, though. It’s thicker and heavier than rivals, and build quality isn’t great. It’s sometimes far too loud, and battery life is unsurprisingly poor. The Aorus is a little pricier than the equivalent Alienware and on par with the Razer.

If you can live with the size, middling build quality and occasional noise, though, you’re getting a decent jump in GPU power over most rivals – and without spending much more. The Aorus isn’t perfect, but it’s certainly worth considering.