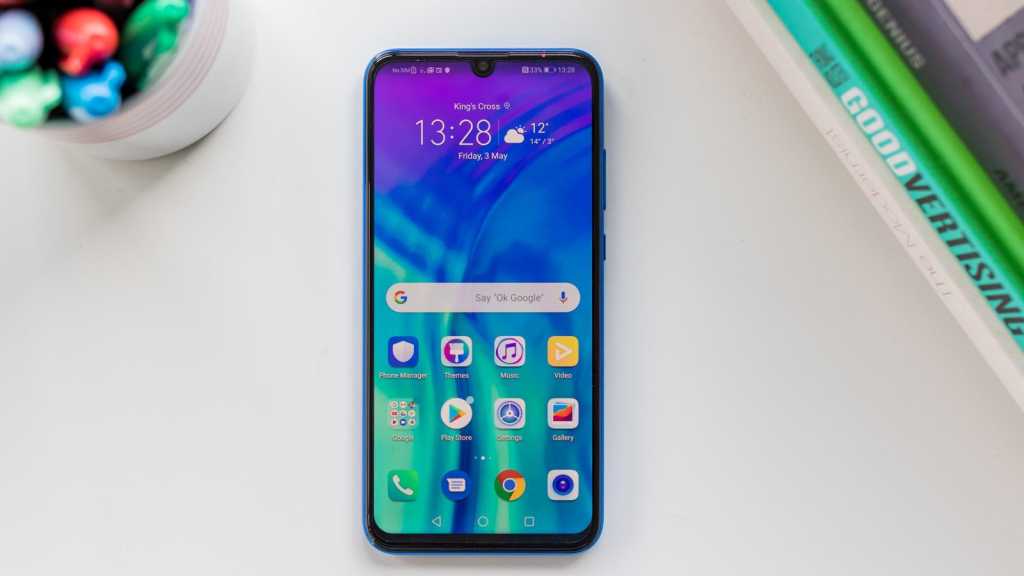 The 20 Lite is very good value as well as being a good Android phone with decent cameras.

The Honor 20 itself and the rumoured Pro version won’t appear until the end of May, so the new Lite version can have its fifteen minutes of fame before the main launch. Highlights include the triple rear cameras, a big screen with tiny bezels and a whopping 32Mp selfie camera.

Most of today’s important boxes are ticked, then, but does the rest of the 20 Lite’s spec sheet offer enough to persuade you to part with your money?

Honor has launched an online shop for the UK and sells both colours. A sale event from 21-28 May offers £20 off, meaning the phone costs just £169.99, making it very good value indeed.

We suspect, though, that most people will prefer the Phantom Blue which – confusingly – is unlike Honor’s previous phones with that name as it’s now a gradient that runs from dark blue to purple.

For every Honor model, there’s often an equivalent Huawei phone and the 20 Lite is the spitting image of Huawei’s P30 Lite.

Although they look identical, there are subtle differences: the camera protrudes much less on the 20 Lite and the bottom edge is curved rather than flat.

The 6.21in screen has an aspect ratio of 19.5:9, with a 1080p resolution. It’s an IPS panel with good enough quality and brightness that we can’t turn up our noses at this price, and the notch for the selfie camera is tiny. Huawei goes for a 6.15in screen which has slightly fewer pixels and a 19.3:9 aspect ratio, but they look the same when placed next to each other, with around a 90 percent screen-to-body ratio. The bezels are a good bit thinner than the Honor 10 Lite’s which we reviewed back in January.

There’s a bigger difference between the two phones: the 20 Lite has a microUSB port where there’s USB-C on the P30 Lite. For some people that will be the deciding factor, but as the P30 Lite costs £80 more we’d suggest it’s a reasonable compromise to live with microUSB.

A fingerprint scanner resides on the back, and there’s a standard headphone jack on the bottom, along with a mono speaker (the one at the top of the screen is just for phone calls).

The model we were sent for review – HRY-LX1T – supports dual SIM but you have to choose between a second SIM or a microSD card if you want to expand the 128GB of internal storage.

Cameras are really important to most people, and it’s worth pointing out that the ‘triple lens, triple the fun’ tagline is ever-so-slightly misleading. Yes, there are three cameras and three lenses, but one of those is purely for depth sensing so, practically, the 20 Lite has two usable rear cameras: a main one with a 24Mp sensor and an ultra-wide camera with an 8Mp sensor.

That’s still pretty good for this price – especially when you factor in the 32Mp selfie camera – but it’s not unique:  Samsung’s Galaxy A7 has a similar arrangement.

We weren’t exactly bowled over with the quality of photos from the A7, though, and the 20 Lite produces better images overall. It also has a night mode which lets you shoot in extremely low light and get usable pictures, something the A7 simply doesn’t offer. The A7 does have a night mode, but it can’t make long exposure shots like the 20 Lite’s Super Night Shot can.

Don’t confuse this with the great Night mode on Huawei’s flagship phones, though. Results from the 20 Lite aren’t as sharp or detailed.

AI scene recognition is used as it is on Huawei phones to optimise photos, and there’s HDR for better detail in high-contrast scenes.

Video isn’t a highlight. There’s no support for 4K, and things are quite wobbly at 1080p if you’re walking and filming.

Browse the gallery above and we’re sure you’ll agree with our conclusions: the cameras are good, but not flagship quality. We’d recommend using the AI mode as images can appear a little dull without it. But avoid the bokeh mode on the selfie camera: it simply doesn’t do a great job of cutting you out, certainly not a patch on the rear cameras.

That selfie camera is very good though, and offers plenty of sharp detail.

Detail from the rear main camera is a little soft, but our main complaint is that even with AI enabled, the autofocus system too readily focuses on the background and fails to prioritise a person’s face.

With the Kirin 710 processor and 4GB of RAM – 2GB more than the similarly spec’d Honor 10 Lite – there’s enough grunt for smooth running in general, but the chipset does run out of puff for demanding games. It doesn’t mean you can’t run the latest games: just that they’ll be a bit jerkier than on the most powerful phones or simply run at reduced detail levels.

For “everyday” use, i.e. email, web browsing, YouTube and other non-3D apps the 20 Lite performs more than adequately with only the occasional stutter.

The only other area where you’ll notice the lack of power is shooting video: there’s no stabilisation. We’d advise changing the default settings which record video at a paltry 720p.

A 3400mAh battery offers enough juice to last a full day, but not if you’re using Google maps for a walking tour of London, say. If you use the phone only lightly, it could make it through two whole days.

The other disadvantage of having a microUSB connector is that there’s no fast charging. In the box is a 10W charger which takes the 20 Lite from 0 to 33 percent in 30 minutes. There’s no wireless charging of course.

It’s no secret that Honor is a sub-brand of Huawei. That charger we just mentioned is a Huawei-branded one and the EMUI software which runs on top of Android 9 on the 20 Lite is also exactly the same as you’ll find on Huawei’s phones.

This means there isn’t a huge amount to say if you’re already familiar with EMUI. We’re no longer its biggest fans: it’s still good for anyone coming from an iPhone but it could really do with a refresh or – in an ideal world – removing altogether. Stock Android is so much better.

You get a few extra features, including Ultra Snapshot which takes a photo as fast as possible when you double-press the power button when the phone is off. Some apps support split screen and you can duplicate a select group of apps including Facebook so you can be logged into two different accounts at the same time.

With the Honor 10 Lite now costing as little as £169.99, you’re paying £80 more for the 20 LIte. And it could well be worth it if those cameras are important to you. But in most other respects, they are very similar phones with similar specs. Really, only a slight change in design and upgraded cameras differentiate the two.

Both are good choices, however, and among the best at their respective prices.