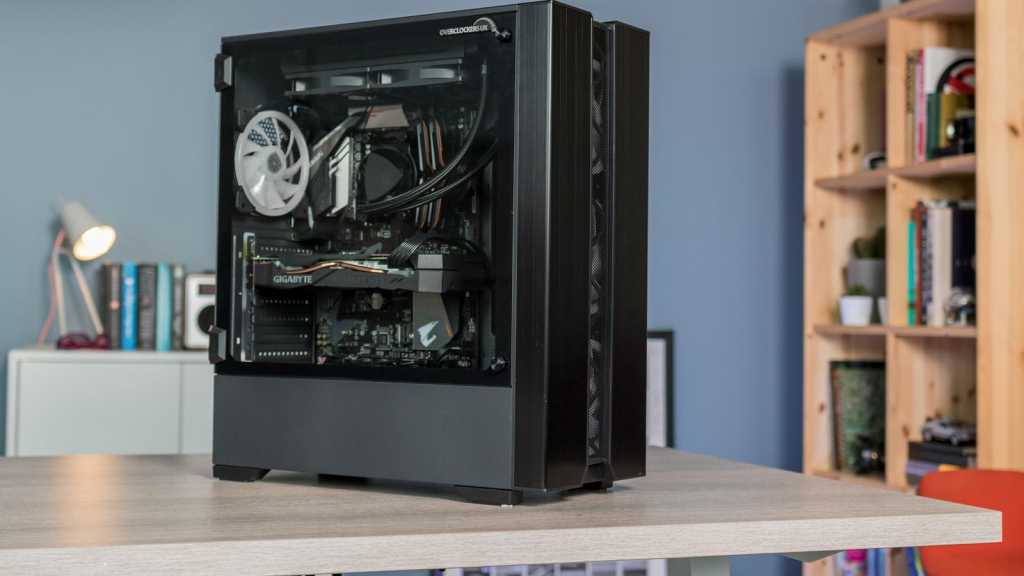 The Hoplite is an extremely powerful out of the box system, requiring very little set up before it can be used thanks to the technicians over at Overclockers. It runs games at over 120fps at 1080p and will continue to do so for the next few years, but it will struggle to reach 60+fps at a 4K resolution.

Overclockers is known for putting together powerful machines so you don’t have to, making sure they’re rigorously tested and checked before they’re sent out of the factory. The Hoplite is certainly no exception and is able to run the latest titles right out of the box striking a great balance between having enough power without over-spending on any one component.

At the bottom of the page, you’ll be able to configure the build to your liking if you’d like to alter some components. The build we’re testing is the higher end of the specifications, but if you’re looking to save some extra money you can change the CPU down to the 2600X without impacting gaming performance too much.

Make sure you take a look at our best gaming PC chart to make sure you’re getting the right machine for your needs.

The Hoplite comes in a black Kolink Phalanx RGB Gaming Case. This case combines the best of both worlds by both looking great and being extremely practical at the same time.

The dimensions for the case are 210 x 510 x 445mm (WxHxD) making it a reasonably sized product. It’s not a massive case though and you shouldn’t have too much trouble fitting it into your setup, but the efficient design still means plenty of room within the case for larger graphics cards (up to 370mm) and taller CPU Cooler Heights (up to 160mm).

This being a pre-built machine, it’s always nice to have that extra reassurance that it has been put together with care and expertise. Overclockers has an excellent reputation for this already, but with your new computer, you’ll find a checklist completed by a technician that shows the tests and procedures they followed when putting it together.

Every machine that comes out of the Overclockers warehouse has been thoroughly tested, and with the included three-year warranty, you can be sure you’re getting a well put together product.

The inside of the case is kept nice and tidy, with wires being tucked away and tied down to ensure the airflow through the case is kept as free as possible. Both hard drives are kept concealed behind a plate to help the overall aesthetic and the cooling architecture too.

The inside of the case is dominated by the two largest components, the graphics card and the CPU cooler.

The Asetek closed-loop liquid cooler is responsible for keeping the CPU nice and cool, with the dual 240mm fans attached to the radiator block at the top of the case. The Gigabyte GeForce RTX 2060 WindForce sits over the PCI-E bays comfortably, dominating the middle of the board.

When the machine is booted up the array of RGB lights make it a sight to behold, bright and cohesive enough to satisfy even the most demanding lovers of aesthetic PC design.

The Hoplite we tested features the AMD Ryzen 2700X, supported by the Gigabyte RTX 2060 WindForce OC and 16GB of the Night Hawk DDR4 memory at 3200Mhz.

The AMD Ryzen 2700x is the flagship of the second-generation Ryzen chips and shows a marked improvement year-on-year, swiftly gaining ground on Intel’s Core-i7 series. Traditionally, Intel has always been the king when it comes to single thread performance while AMD processors fare better at tasks that make use of multiple cores.

The majority of games will perform better on fewer, more powerful cores rather than many, less powerful ones. This will generally place Intel’s equivalent i7 processor above the 2700x for game performance, but it won’t be by a lot.

When it comes to tasks that can make use of several cores, such as video editing, the increased core count of the AMD processors will start to shine through and surpass Intel’s offering.

Having said all that, the 2700x will still boost up to 4.35Ghz on a single core, so it’s certainly no slouch in single core performance either – just not quite as fast as Intel.

The Gigabyte RTX 2060 WindForce is a very solid graphics unit, but it holds a bit of a strange position within the RTX line.

As the most wallet-friendly offering in Nvidia’s RTX series, it appears to be a good option for those of us that want ray tracing visuals on the cheap. However, when we put it through 3DMark’s Port Royal benchmark designed specifically to test ray tracing, we only got a score of 3909 with an average FPS of 19.

The card just doesn’t have the available resources to deal with the demands of heavier ray tracing workloads, which could leave customers disappointed when the card they bought with ray tracing in mind.

On the upside, the card will perform more than well enough at a 1080p resolution if you’re running the latest games at medium graphics level, even at ultra settings, you’ll still see above 60fps. We found the system averaged 147 FPS in Total War: Warhammer 2 on medium settings and then an average of 87 on Ultra graphics.

Bumping up to 4K will means it will struggle with some of the more strenuous titles available, and while you can get an acceptable frame rate you’re going to struggle to get above 60fps consistently. For just an extra £100, you could upgrade to the PC Specialist Vulcan S2 which has an RTX 2070.

This will also mean that in the next few years as graphics quality improves, this card will start to struggle on the larger resolutions – so if you’re looking to move into 4K in the future we’d recommend a more powerful card.

This build is all held together by the Gigabyte B450 AORUS ELITE motherboard which provides a solid foundation for the machine, with a wide array of features and a respectable amount of PCI-E slots. It also includes 4x USB 3.1 and 4x USB 2.0 ports along with support for up to four sticks of RAM.

The closed-loop Asetek 240mm AIO CPU cooler helps keep the processor cool and does so excellently with the help of the Noiseblocker BlackSilent Pro PLPS 12mm system fans.

These benchmarks were collected with the spec listed above which can be found here on the Overclockers website:

The Geekbench 4  benchmarks show the difference in single core performance between the AMD and Intel CPUs.

The Yoyotech Warbird features a Core i5-6600k and the Chillbeast Fusion Juggernaut holds an 8600k. Sadly the later model i5 doesn’t include hyper-threading which means it’s going to fall behind when it comes to multithreaded applications.

The Geekbench Multi shows the raw processing power of the Ryzen 2700x as it pulls ahead of the Warbird’s 6600k. This will only get more pronounced with workloads that can make use of higher core counts, too.

The PCMark tests across all machines are generally outstanding, although the Hoplite falls behind once again due to the majority of everyday programs only using one or two cores.

Sky Diver shows the Hoplite putting up an excellent score against the other two machines, particularly because the Warbird and Chillbeast run an RTX 2070 and 2080 respectively. This shows that at a 1080p resolution, the extra performance you’re getting from the higher end RTX cards isn’t worth the money. However, if you’re looking to game in 4k or at 200+ FPS with some specialised screens, the more powerful cards will start to make sense.

The Hoplite from Overclockers is a powerful machine at a reasonable price. Spending under £1,500 for a computer this powerful, that is ready to go out of the box, is a solid investment for those of us that don’t want to get our hands dirty building a PC ourselves.

However, this machine does miss the mark a little when it comes to more strenuous 4K gaming. If you’re looking to purchase a rig specifically for gaming, a 7th or 8th generation Intel i5 is still the best choice, coupled with a graphics card that suits your needs.

If you want to game consistently at 4K we’d recommend an RTX 2080 at least. If you’re planning to remain at 1080 then the RTX 2060 will serve you well for the next few years.