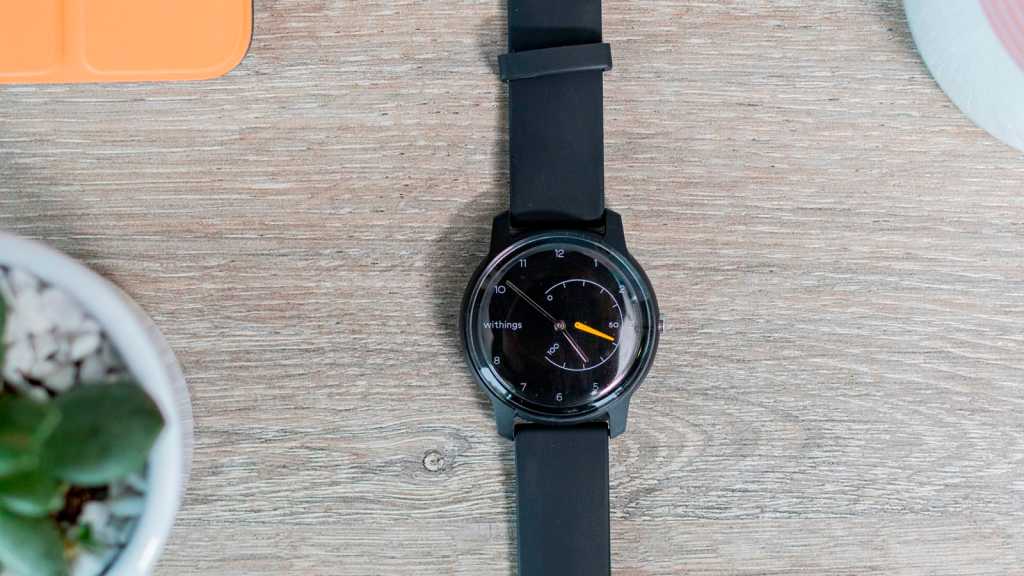 The Move is a slick fitness tracker from Withings that’s ideal for anyone who wants to keep things simple. 18-month battery life is obviously a major selling point, and the customisable designs are a big appeal too. A heartrate sensor would really seal the deal, but it’s an understandable omission at this price point, and with waterproofing, sleep tracking, and great app support, everything else about the Move is easy to love.

Fitness trackers are a dime a dozen these days, and so it’s hard for even established players like Withings to stand out. The Withings Move does its best by offering core features at a friendly price and letting the design do the talking – with a bit of help from you.

That’s because while the standard issue Moves look attractive enough, the real selling point here is customisability: you can get a Move in a load of different colour combinations and even pick the design of the watch face itself.

The Withings Move is out now, and costs £59.95/ $69.95 for the base model, which is available in five different colour combinations. You can buy it direct from Withings or just grab it from Amazon if you prefer.

If you’re in the UK or Europe you can also customise the Move, picking the design of the dial and the colour of the body, activity tracker dial, and strap from a set range of options. You’ll have to pay a little more for the privilege, but not a lot – a customised version will cost you £69.95. The feature will come to the US too, but isn’t available at the time of writing – right now you can build customised designs, but can’t actually buy them.

Since launch Withings has also added the ‘Timeless Chic’ version of the Move. This is essentially the same watch but with a more premium build: a stainless steel case, metal hands, and mineral glass face. Naturally it costs a little more too though:  £99.95/$99.95 for Black/Silver or White/Silver with a silicon strap, and £129.95/$149.95 for a Blue/Rose Gold model with a leather strap. 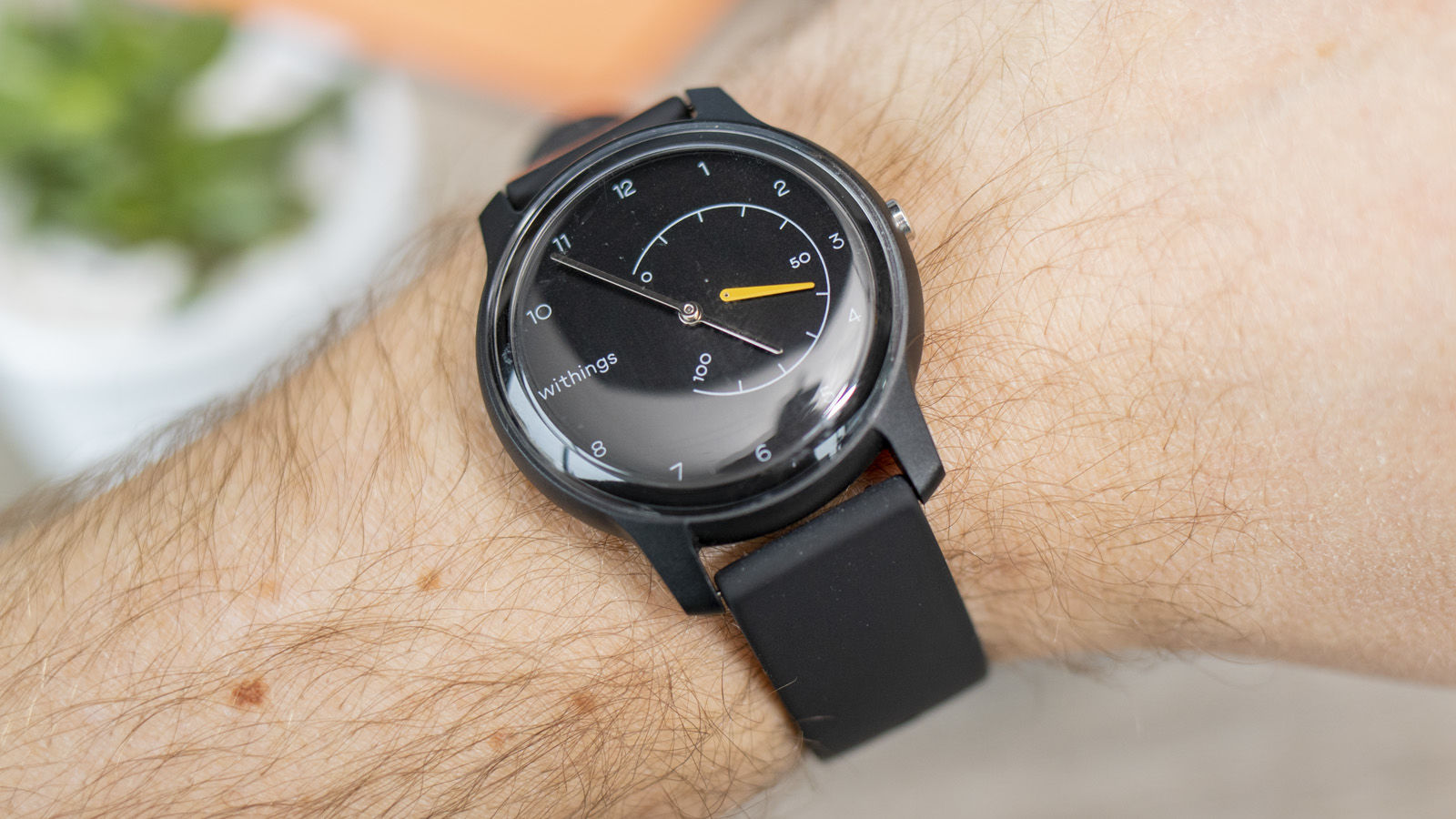 In terms of price, the Move is in line with other simple fitness trackers – the obvious comparison is the £69.99/$69.96 Fitbit Inspire, currently the cheapest product in the Fitbit line. The challenge at this price point is that for only a little more you can get a device with a heartrate sensor – the Fitbit Inspire HR is £89.99/$99.95 – which adds an important bit of extra functionality.

Withings has also released the Move ECG, a version of the watch that includes an electrocardiogram and some other tweaks. However, it is a little more pricey and doesn’t come with the customisation options that the Move has – a downside of rigorous certification requirements.

The Withings Move looks more or less like a standard sporty wristwatch. The slim body comes with a rubber-y wrist strap, and is lightweight and unobtrusive enough that you’ll almost forget it’s there. There’s a single button on the right side, and that’s about it. 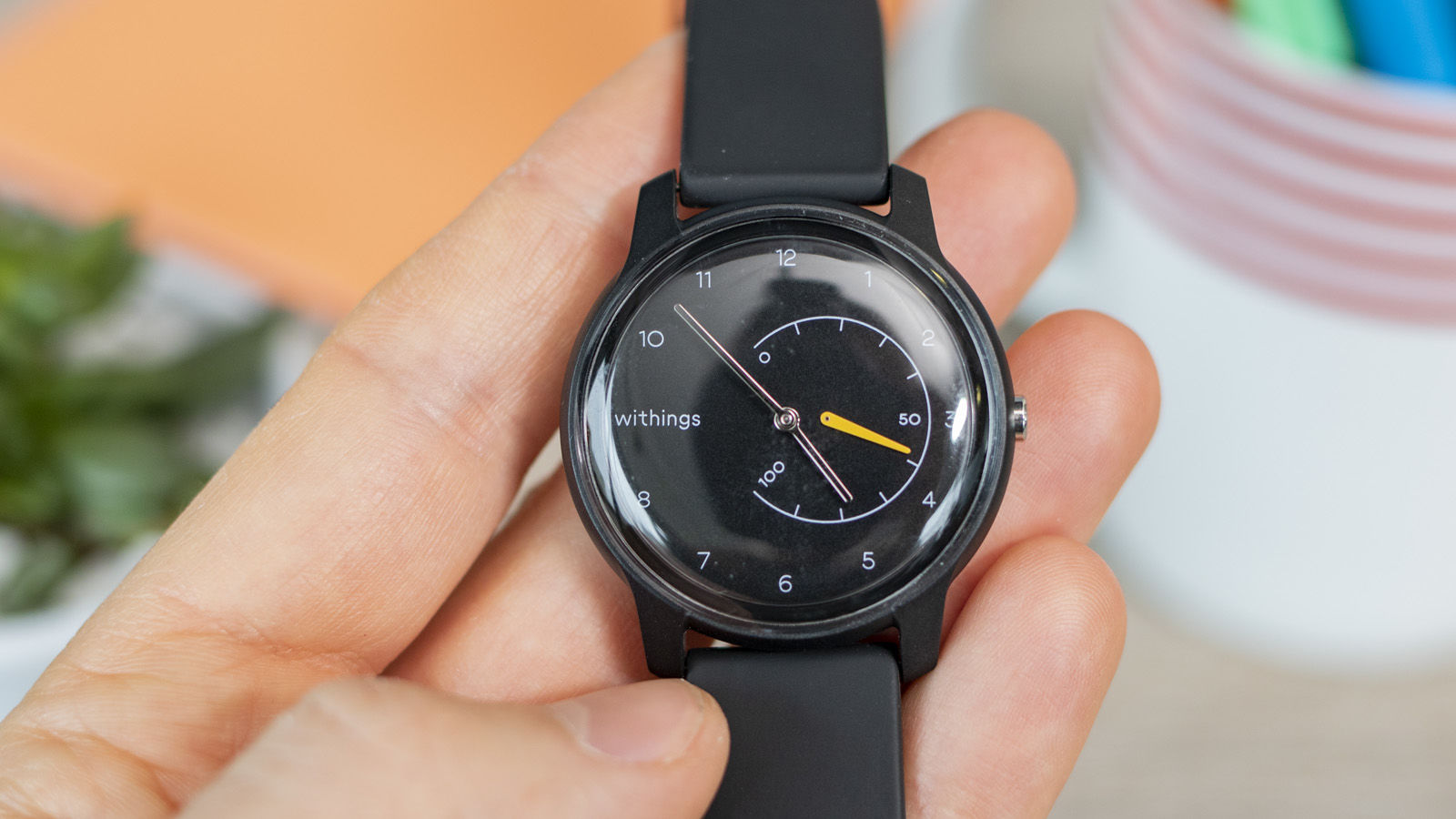 Build quality is mostly solid, and the strap is comfortable, but whatever plastic the face is made of is definitely a bit too soft. After only a week or two of day-to-day wear it’s already picked up a few scuffs and scratches, and it’s only going to get worse. It’s not too bad – nothing that gets in the way of using the thing – but if you worry about keeping your tech pristine then this might get on your nerves.

The face boasts two dials: the standard watch face and a smaller central dial that goes up to 100. This is your step count for the day, measured not in steps (100 would be fairly manageable even for the laziest amongst us) but in percentage. That means you can use the accompanying app to set any step goal you’d like, and get real-time updates on your progress from your wrist.

Once you hit 100 percent the dial resets to zero and begins to climb again, so it will still track your progress beyond your goal. It then automatically resets to zero at midnight every night.

There’s other functionality baked in the Move of course, but Withings keeps it all in the app, freeing the watch itself to be simple, minimalist, and easy to read. That means the fitness tracking never gets in the way of the timekeeping, and this is a device you’d be happy to use to replace your existing watch, rather than merely supplement it. 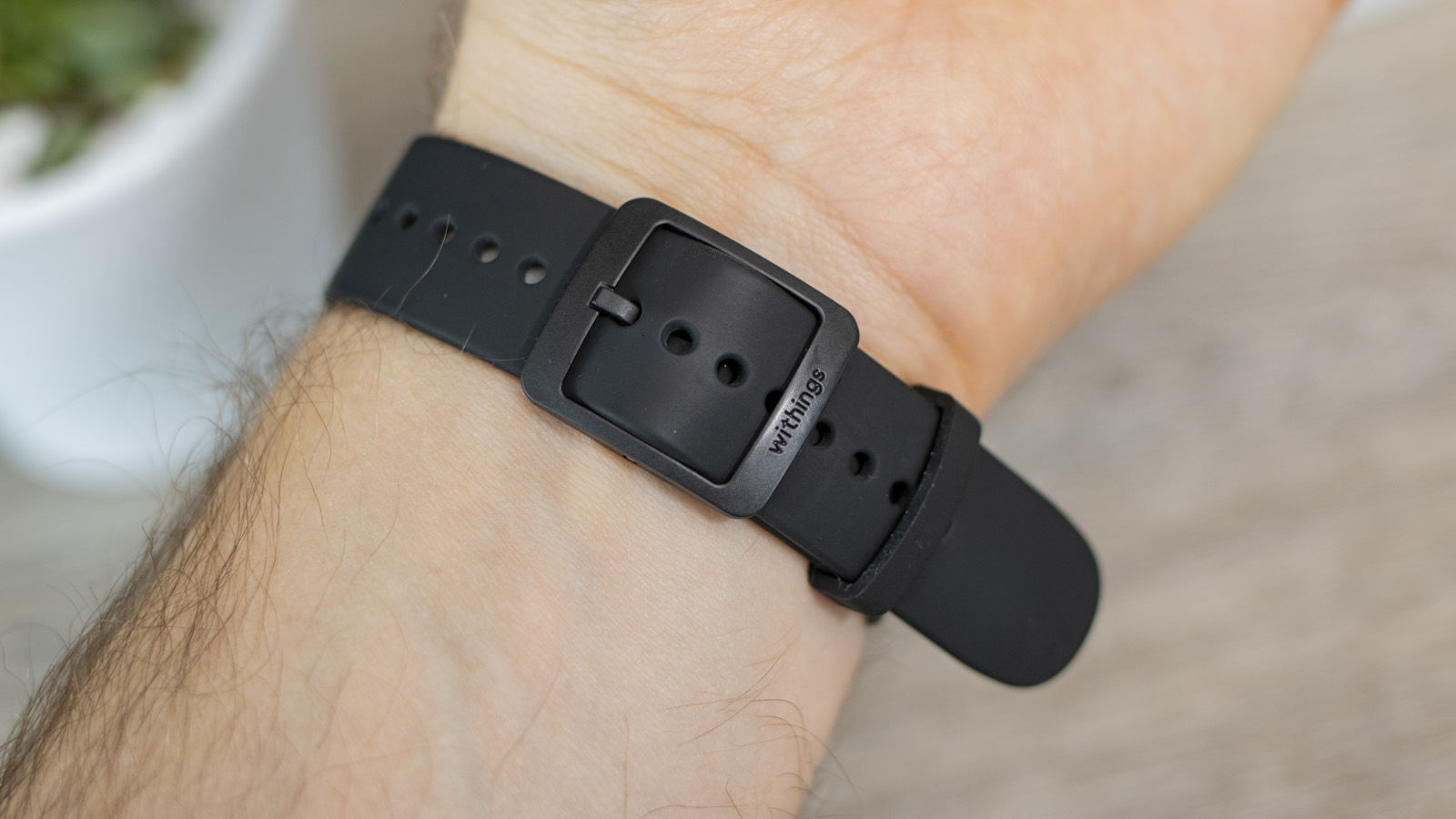 So beyond how it looks, what does the Move actually do?

The core fitness tracking is the previously mentioned step counter – there’s a reason that’s the only bit of data that sits on the watch itself. The Move will record your steps during the day and sync that data with the accompanying Health Mate app, which lets you change your daily goal, get more detailed info on your days steps, and look at historic data.

Automatic exercise detection means the Move will track your walking, running, cycling, or swimming by default, but you can also manually activate a workout mode to track those or other activities, running from tennis and squash to weightlifting, yoga, and even windsurfing.

Holding down on the button for a second begins the workout, resetting both dials to zero. The regular watch hands then become timers, recording how long you’ve been exercising, while the step counter displays only your steps during that period. Holding the button again ends the workout while a quick double-tap lets you see the time and your overall step count before returning to the workout. 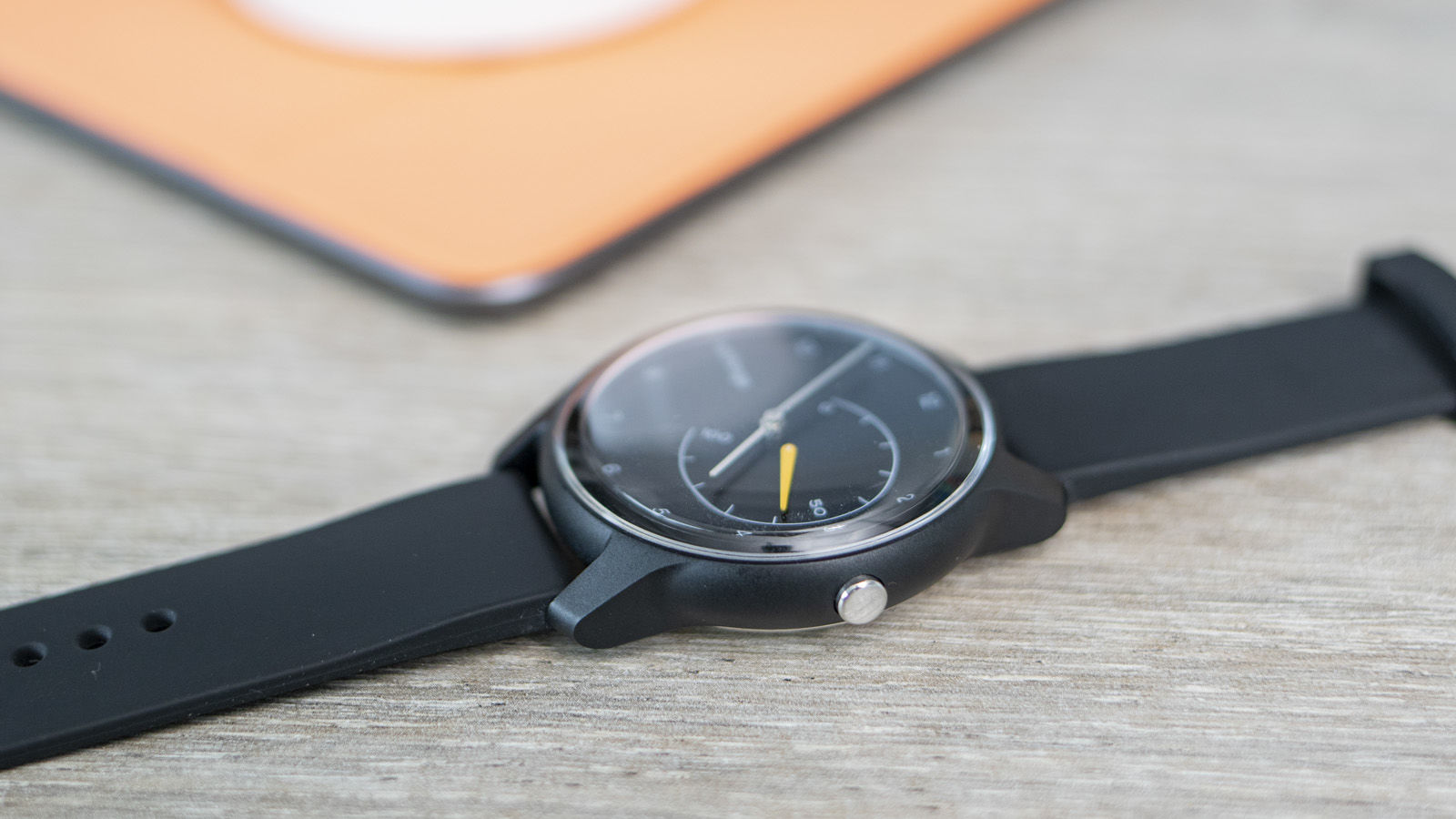 Head into the app after you’re done and you’ll find a recording of the duration, distance and pace (if applicable) and an estimate of your calorie burn – though without a heartrate sensor you should definitely take this with a pinch of salt. As long as you keep your phone with you you’ll also get a map of your route on a run/walk/cycle, driven by the phone’s GPS.

The Move won’t just track your activity though – it’s also great at inactivity. Wear it overnight and it’ll track your sleep, giving you info on the duration and depth of your rest. It then factors in how regular your sleep schedule is to give you a daily ‘Sleep Score’ along with feedback on how you can improve it.

You can also take advantage of that sleep monitoring for your alarm – you can use the app to set an alarm window, and the Move will try to detect the optimum moment in your sleep cycle to nudge you awake. 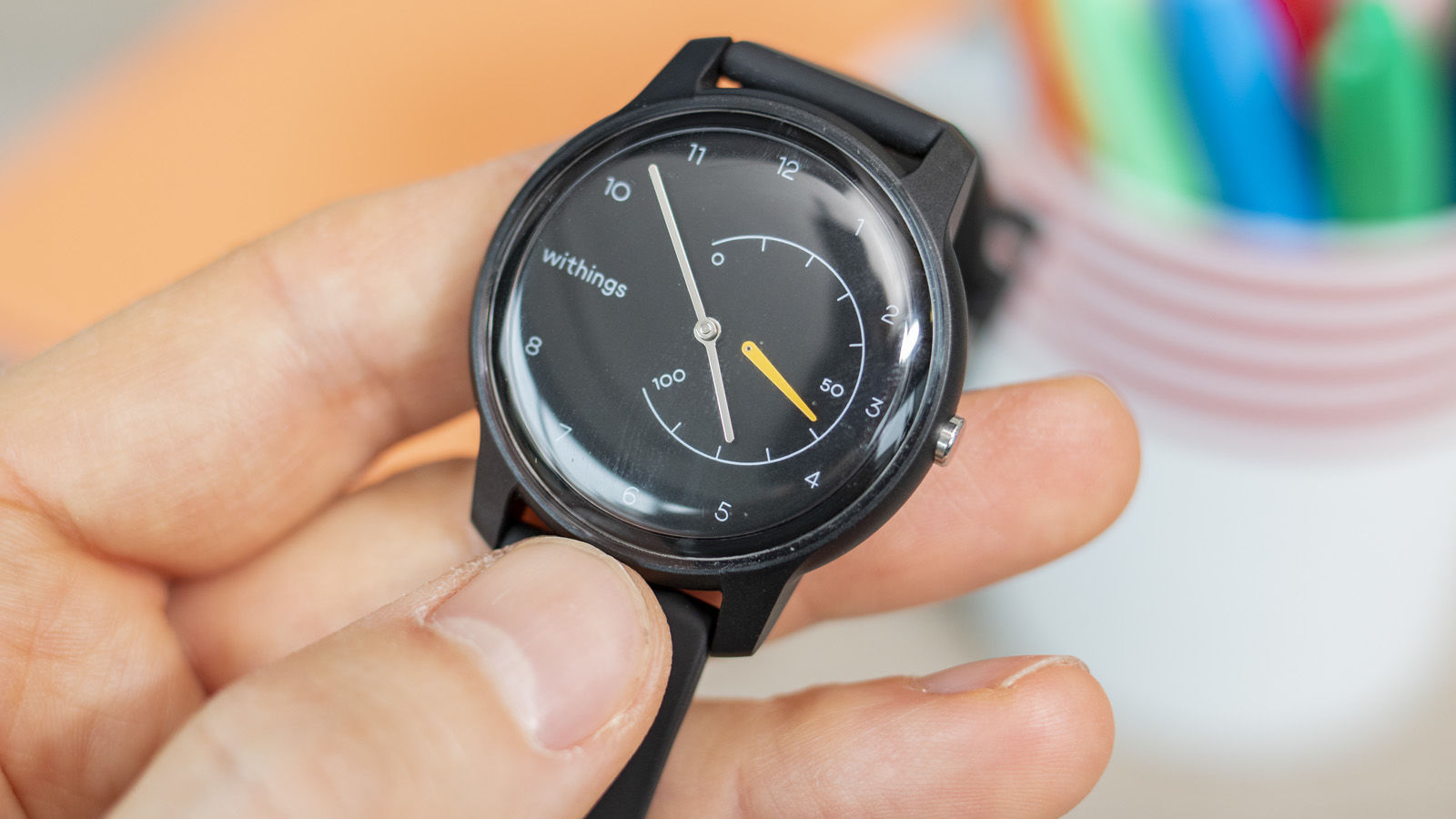 You can link the app up to the likes of Google Fit or Apple Health, along with more specific apps like RunKeeper or MyFitnessPal, so it’s easy enough to keep all your health data connected. Data should in turn sync from the Move to your phone automatically every few hours, but this seemed a little shaky on my Huawei P30 – though opening the app forces a sync, so as long as you keep an eye on the app every now and then you shouldn’t lose any data.

I’ve already mentioned swim tracking, but in case that didn’t give it away, the Move is waterproof. It should be able to survive up to 50m depth – so it’ll definitely survive a few laps in the pool or a shower. Pressing the button underwater breaks the seal and risks damaging it though, and prolonged saltwater exposure isn’t good for it either.

There’s one final edge that the Move has over most of its rivals: battery life. Forget counting in days or even weeks, the Move is expected to last a whopping 18 months at a time, so you really won’t ever have to think about charging it or worrying about it dying.

The downside is that it uses a standard CR2430 watch battery, and to replace it you’ll probably need to go to a jeweller or watch shop – especially since botching the job yourself could accidentally ruin the waterproofing.

The Move is a slick fitness tracker from Withings that’s ideal for anyone who wants to keep things simple. It only does the basics, but it does them well, and the analogue form factor keeps things clean and easy to read.

18-month battery life is obviously a major selling point, and the customisable designs are a big appeal too. A heartrate sensor would really seal the deal, but it’s an understandable omission at this price point, and with waterproofing, sleep tracking, and great app support, everything else about the Move is easy to love.