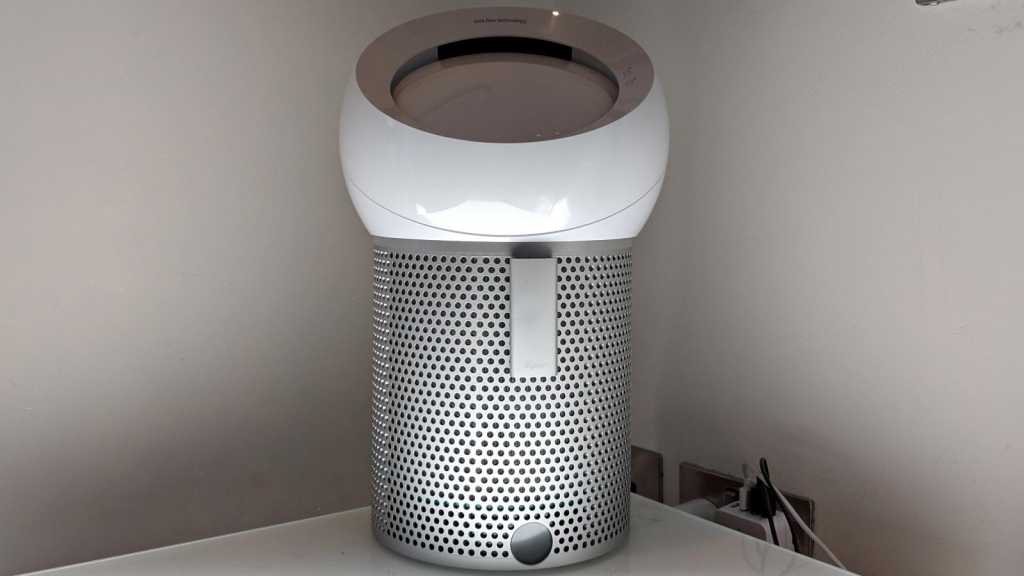 If you’ve got a big desk and want a fan you can point at your face without worrying about blowing anything else around, the Dyson Pre Cool Me is probably the best around. On the other hand, if you’re more constrained for space or want a fan to cool a couple of people or even a small room then you’re not really playing to the Pure Cool Me’s strengths.

Dyson’s bladeless fans boast an iconic design language that has made them as immediately recognisable as any of their vacuums. So when the company decides to switch that up and release a fan that looks entirely different, you know there must be good reason for it. So it is with the Dyson Pure Cool Me.

The name may be clunky, but it tells you exactly what to expect from the Pure Cool Me: an air purifying (Pure) fan (Cool) that’s small enough for personal use (Me). It’s that last bit that’s justified the radical redesign though, as this fan isn’t just small enough to use for one, it’s designed to focus air at just one person too.

If you’ve ever looked at a Dyson product before, it will come as no surprise that the Pure Cool Me is not cheap. It’ll cost you £299.99 in the UK or $349.99 if you’re in the US, which is obviously a fair amount for a fan.

That’s in line with Dyson’s other fans, and actually only slightly more than the non-purifying Dyson Cool Desk, and half the price of the Pure Hot + Cool – though as you can probably guess, that one’s a heater too. If you’d rather not spend hundreds, check out our best fans review round-up for some more affordable options. 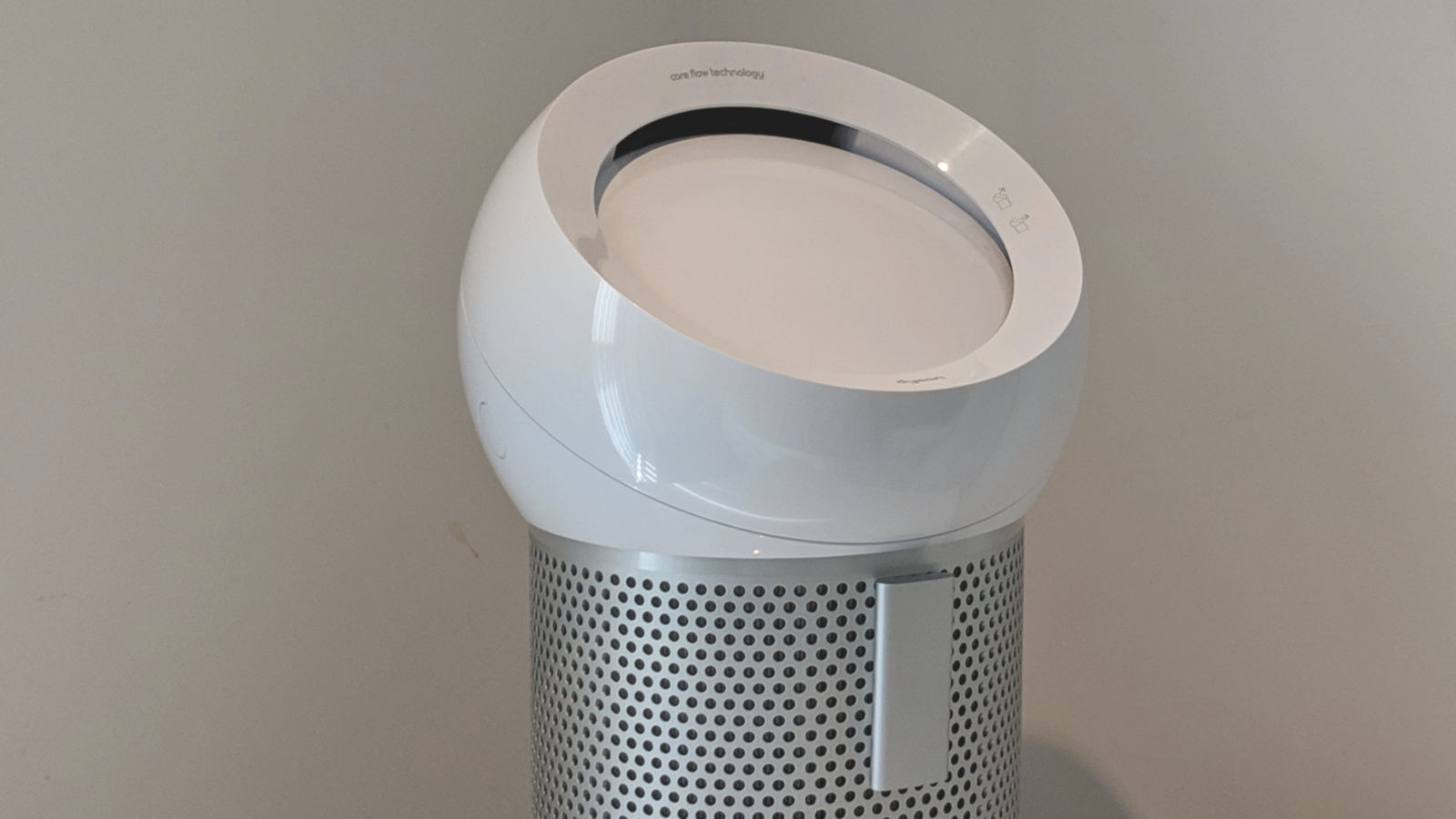 My own private airflow

Every Dyson fan for the last few years has consisted of a round or oval body with a gap in the middle – the iconic ‘bladeless’ design that in fact simply hides the blades away while blasting air out of the edges of the body.

The Pure Cool Me is different. On top of its stocky base sits a mysterious white sphere, set slightly into the body of the machine. Switch the fan on and you’ll notice that air seems to come from the centre of the sphere – despite the fact that it’s sealed shut.

This is, of course, a bit of Dyson magic. The air is actually coming out of the edges of the body, but thanks to a clever bit of engineering (supposedly inspired by the Harrier Jump Jet’s vertical takeoff) the cool air collects in the central point and is then blasted out in a surprisingly focused ‘beam’ of cold air. 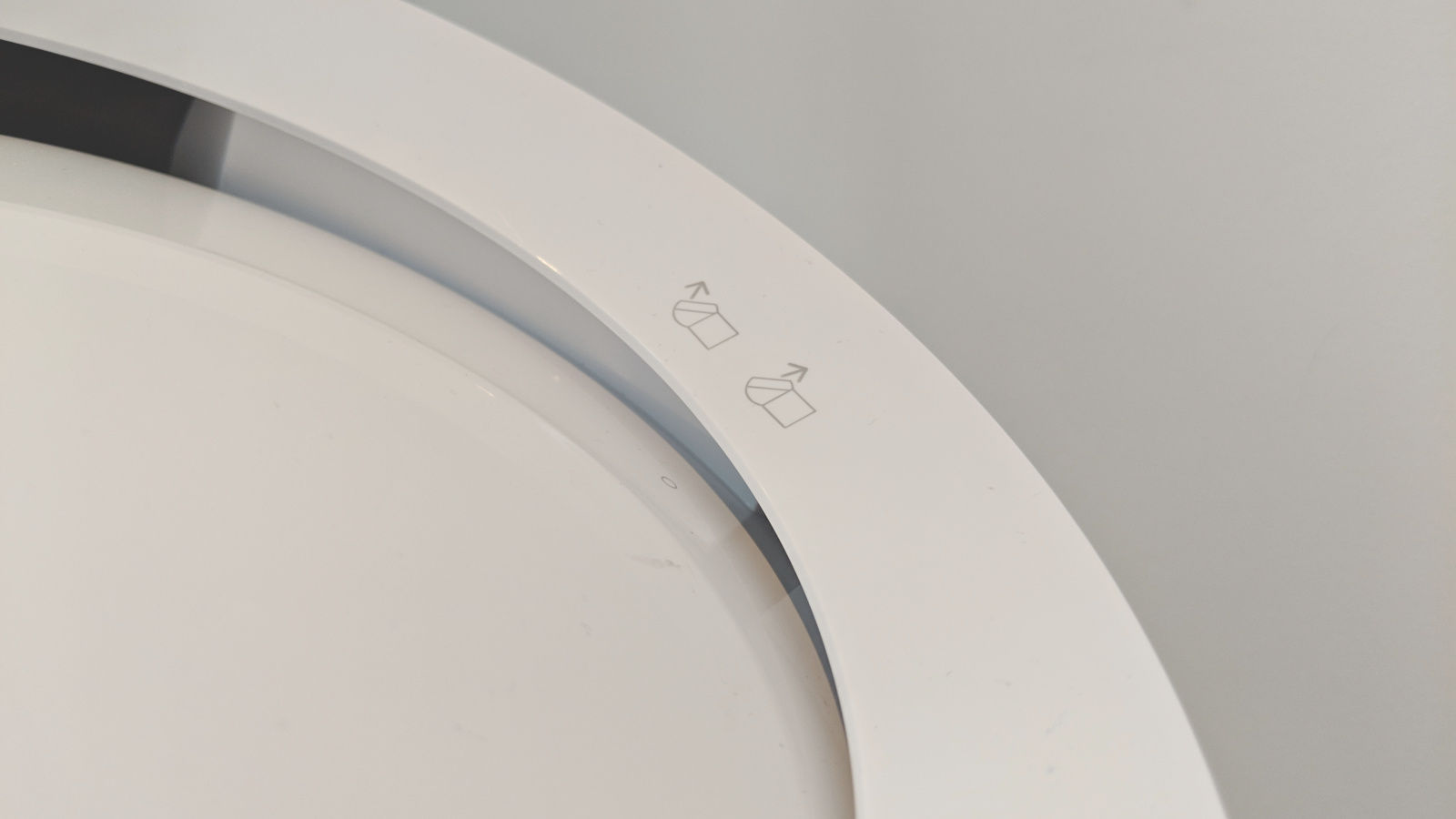 You can physically tilt the ball slightly to change the vertical angle of the air, from roughly horizontal to around 45 degrees upwards, depending on whether you have the fan on a bedside table or a desk. Either way, with a bit of careful positioning, you can set the Pure Cool Me up so that it shoots out cool air directly at your face – and nowhere else – making it ideal for personal cooling without blowing the papers around your desk.

The big downside – as with all of Dyson’s desk fans – is that ‘small’ is relative. The Pure Cool Me is certainly smaller than one of the company’s towers, but it would still dominate almost any desk, and would take up most of your bedside table too. Compact this is not.

Much of that size comes down to the chunky base unit, which houses the filter required for the air purifying part of the system. Much like Dyson’s other recent fans, the Pure Cool Me sucks in air and filters it, only sending you the resulting purified air.

Dyson’s website is filled with lots of technical specs about what percentage of particles it filters and just how many microns small they are, but it essentially comes down to this: the fan will filter out most allergens and pollutants, from pollen to car exhaust and even cooking fumes. 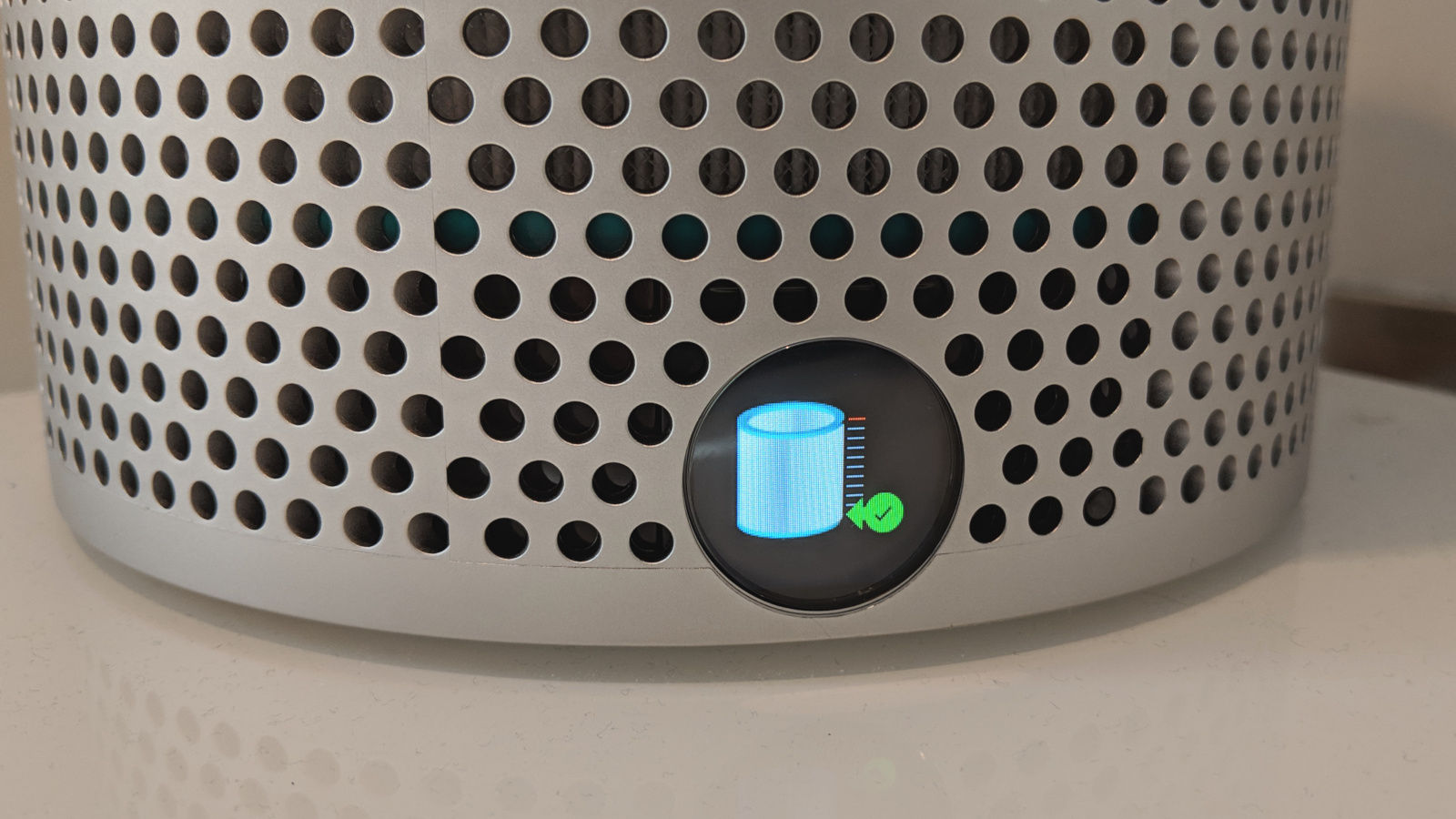 A small circular display on the body will give you a live feed of the air quality in the room, though it’s simpler than on some of the company’s other air purifiers – it’ll only give you an overall scale of the pollutants around, rather than letting you cycle through info on each of the various particle types that the purifier is designed for.

Dyson touts plenty of health benefits, particularly when it comes to improving your sleep – making this especially good for the bedroom. That’s a little tricky to test in a review of course, but I didn’t notice my health getting any worse as a result, and if nothing else it brings a bit of peace of mind.

Of course, what really matters at the end of the day is how well this works as a fan. The new design doesn’t seem to have reduced efficacy any, and in fact cooling power seems improved – whack this thing up to 10 and you will quickly be pretty damn cold.

More importantly, it’s quieter too. I’ve been primarily using the Pure Cool Me next to my bed, and even in the middle of its power range the whirr of the fan is low enough to comfortably fall asleep to – though at max power it might still be a little much.

It helps that there’s a sleep timer to let you set the fan to turn off after 30 minutes, or one, two, or four hours. You can also set it to rotate 90-degrees in case you don’t want such a focussed blast of air. 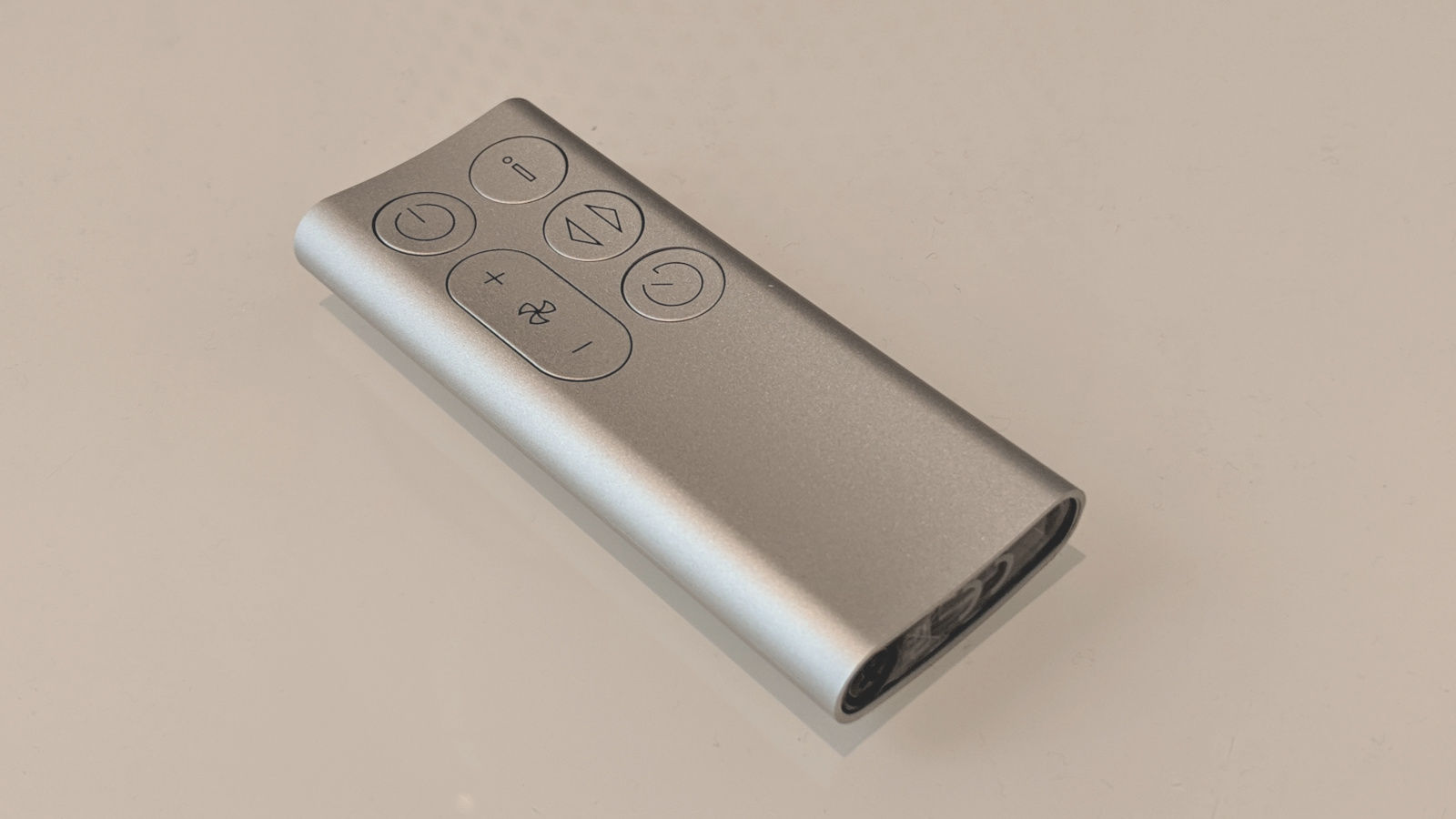 All of this is controlled using the familiar Dyson fan remote, which magnetically attaches to the main body of the fan. Perhaps surprisingly, there’s no smart support here though – a cost-saving measure that Dyson justified on the basis that nine times out of ten you’ll be sitting right next to the thing anyway.

One downside of that decision is that you can’t monitor your air quality in more detail, as you can on other models, so you’re limited to the simple real-time data shown on the fan itself. It also means the rest of the settings are simple – rotation is etiher on/off, and the sleep timer is set to specific increments, with no option to customise it. There’s also no scheduling, so you can’t set the fan to switch on and begin cooling you ahead of your morning alarm.

The omission of smart support is a shame, but ultimately makes sense when it comes to keeping the cost from getting too prohibitive – though the Pure Cool Me is still as expensive as you’d expect from Dyson.

Whether it’s worth it for you will depend on how worried you are about air purification, and how much space you have. If you’ve got a big desk and want a fan you can point at your face without worrying about blowing anything else around, this is probably the best around.

On the other hand, if you’re more constrained for space or want a fan to cool a couple of people or even a small room then you’re not really playing to the Pure Cool Me’s strengths, and you’ll be better off looking at one of Dyson’s older desk fans – or just a cheaper model from elsewhere.