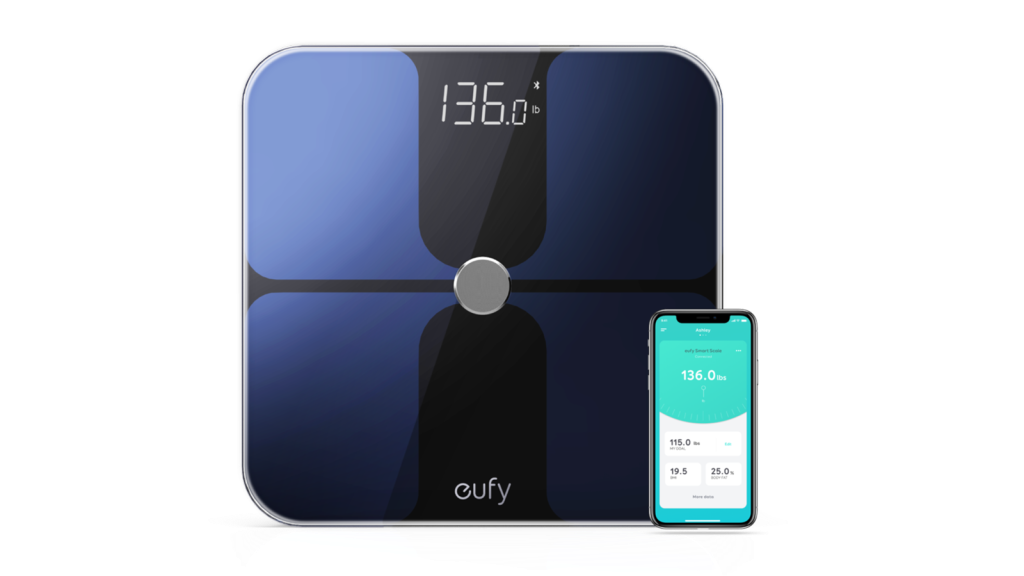 An affordable smart scale that can help keep track of weight, BMI, body fat percentage, muscle mass and more. It misses out on some of the luxury features provided by its more expensive rivals, but for the price it’s hard to fault the Eufy BodySense Smart Scale.

We’re all familiar with traditional digital scales that can show body weight in various units, but what if you want to know more about your body? By pairing to an app via Bluetooth, Eufy’s BodySense Smart Scale adds the ability to track your BMI, body fat percentage and body mass, as well as offering information about your bone mass and more. We’ve put it to the test to find out how it compares to other smart scales we’ve reviewed.

One of the most appealing things about the Eufy BodySense scale is that it is very reasonably priced. At £39.99/$44.99, it is one of the cheapest smart scales we’ve seen and significantly so compared with the likes of Fitbit’s Aria 2 and the Withings Body Cardio. That does mean some compromise as we outline below, but the feature set offered here will be enough for many and is much more budget-friendly.

It’s available to buy from Amazon as well as Eufy’s own online store. If you’re happy to spend ever so slightly more, we’ve also reviewed Eufy’s top model, the Smart Scale P1.

Eufy’s BodySense has a stylish glass design, available in Black or White. There’s a large, easy to read LED screen on the front that won’t be obstructed when you stand on the scales for weighing.

The display will show you your weight in whichever unit you’ve chosen, but for any more details you’ll need to refer to the app. If you’d like to see more information right there on the scale display, a more expensive smart scale such as the Withings Body Cardio may suit you better, but you are looking at more than double the price of the Eufy BodySense. Find out more in our Withings Body Cardio review.

Eufy’s offering is not too bulky, so it’ll be easy to store in a bathroom cupboard or shelf. It’s best to use the BodySense on a hard, flat surface rather than a carpet for the most accurate readings, which could be quite frustrating if you want to use it anywhere other than your tiled bathroom.

Some other scales we’ve reviewed (such as the QardioBase 2) have been designed specifically to be able to work even on softer surfaces, but that does come at a higher price.

It’s powered by four AAA batteries, which is less ideal than the rechargeable options offered by some competing scales including Withings Body Cardio and QardioBase. 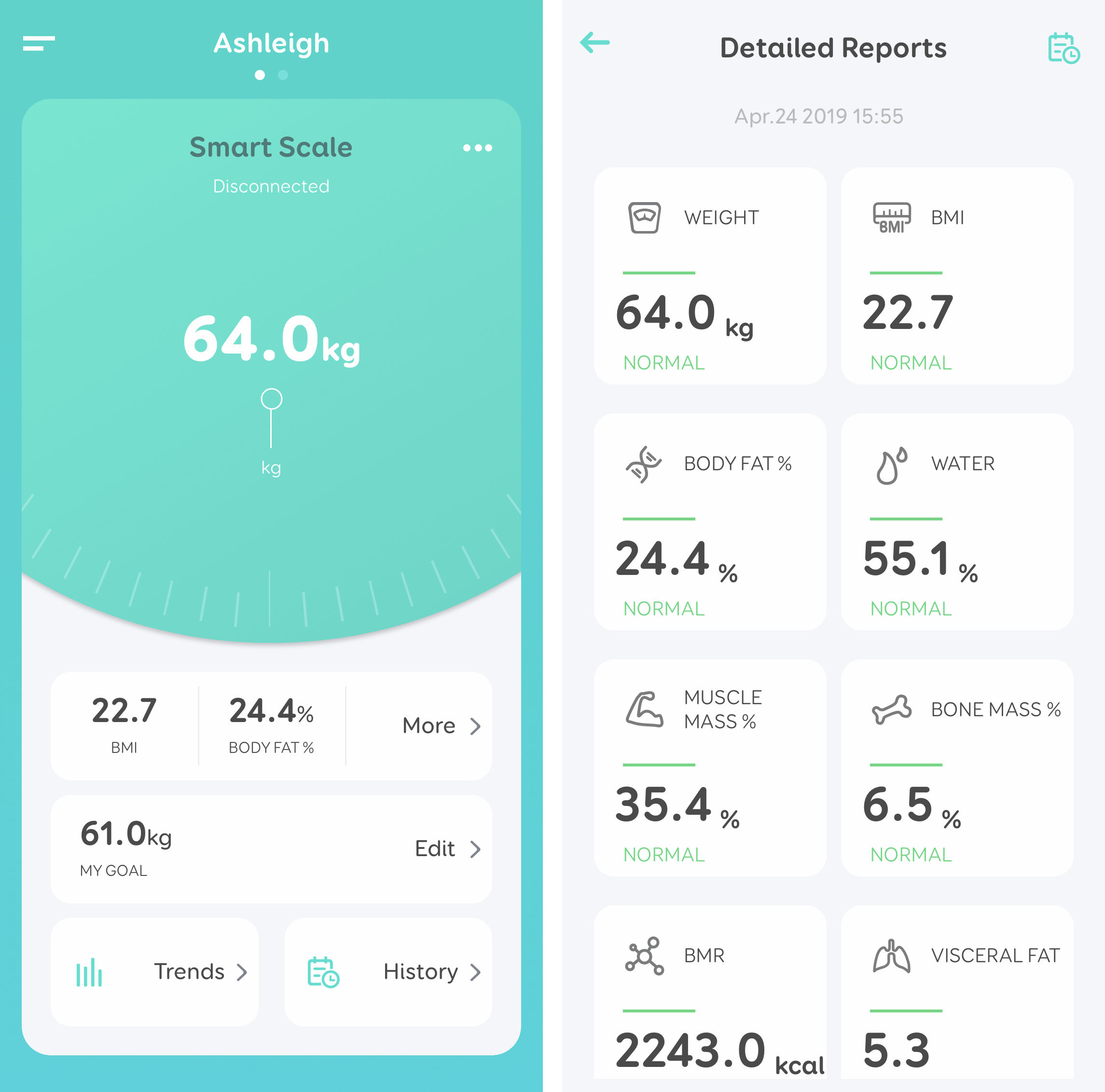 The Eufy BodySense is easy to set up and use. Once downloaded, the EufyLife app will offer clear quick start instructions that’ll guide you through set up and first use, and we found that it paired with the scales instantly via Bluetooth without any issues on both Android and iOS devices.

In addition to being able to measure your weight, it can also tell you your BMI, body fat percentage, water, muscle mass percentage, bone mass, BMR, visceral fat, lean body mass, body fat mass and muscle mass. It’ll tell you whether each of these is high, normal or low.

That’s a lot more detail than ordinary scales, but at a very fair price. If you’re looking to target certain aspects of your training or weight more specifically, this could be ideal. Perhaps you are looking to gain muscle mass but lower body fat percentages – with ordinary scales it would be difficult to determine whether you’re achieving these goals.

Households can pair up to 20 accounts to the scales, which is far more than the five to eight offered by some of the big-name and more expensive smart scales, and definitely more than necessary.

You can choose to add family members into one app, and simply swipe between them before the corresponding person stands on the scales, or you can set up separate accounts if you prefer to keep things private.

The best way to use the scales when paired with multiple accounts is to make sure the right app is open when you step on, but if there’s only one person using the scales you can leave the app closed and it’ll sync the results via Bluetooth next time it’s able to.

The app allows each family member to add their own weight goals, but there is no option to add a goal for body fat or muscle mass – instead you’ll have to keep track of your progress there using the Trends section of the app, which shows daily graphs and charts for weight, BMI, body fat and muscle Mass.

The Eufy BodySense misses out on the rewards and health milestones offered by rivals such as the Withings Body Cardio, which is a shame for those that enjoy gamifying the experience.

You’ll find that you can connect the scales to Apple Health and Google Fit, handy if you use activity trackers in addition to the scales as part of your health and fitness regime.

It’s not as seamless as it would be if you used Fitbit’s own scales with a Fitbit, or Withings scales with a Withings activity tracker, but again you’re looking at much more expensive scales for that luxury. Some rivals also offer compatibility with many more health apps including MyFitnessPal and Samsung Health, but Eufy’s is limited to just the three we’ve mentioned.

Other luxuries these scales miss out on are haptic feedback, no WiFi connectivity, and no pregnancy mode, all of which are offered by the QardioBase 2.

At this price, it’s difficult to find fault in the Eufy BodySense Smart Scale. It offers plenty of features that’ll help you focus on your weight goals at a more granular level than ordinary weighing scales, and the ability to pair it with various fitness tracking apps makes things even easier for runners, cyclists and gym-goers.