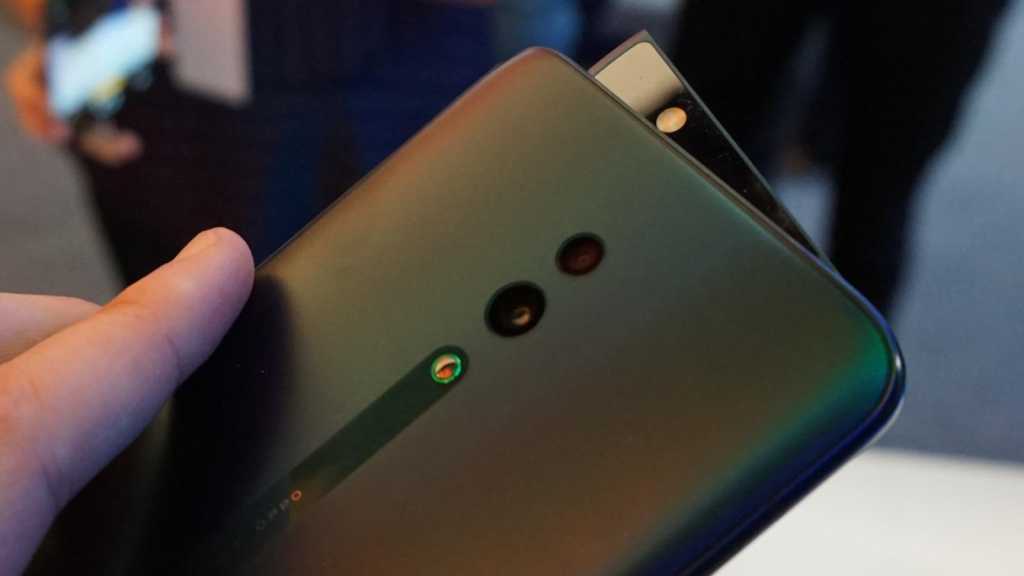 If you’re here for the camera then the Oppo Reno isn’t too exciting beyond that mega megapixel count. But as a cheaper way to get a full-screen phone with that wacky pop-up, it’s easy to see why the Reno might appeal.

We thought we’d seen it all when it came to selfie cameras: notches, punch-holes, sliders, pop-ups, and even the Vivo Apex concept phone with no selfie camera at all. Then comes along the Oppo Reno with something new after all: a ‘pivot rising camera’ that slides out of the phone body at an angle.

Oppo has launched the Reno alongside a more premium 10x Zoom and an accompanying 5G model, but if you want the pivoting pop-up without breaking the bank, the regular Reno is where it’s at.

Oppo hasn’t yet confirmed UK pricing or release date for any of the Reno models, but we do have information for Europe. The Reno will be available from May for €499 (roughly £430), so expect to see it in the UK slightly after that, and likely around £500 – somewhere in line with the recent RX17 Pro, which was £549 in the UK.

The 10x Zoom model will cost €799 – but comes with a better camera (with, you guessed it, 10x zoom), bigger screen, and faster processor – while the 5G model offers all that plus faster internet connectivity for €899.

Pop-up selfie cameras are nothing new, at least not by smartphone standards. A few phones have used the design, including Oppo’s own Find X, which has a selfie camera that slid out of the top of the housing to avoid getting in the way of the display.

The Reno is fundamentally the same, but approaches it from a different angle – quite literally. The 16Mp selfie camera is housed inside the phone body, and automatically slides out of the top when needed. But instead of sliding vertically, it pivots out at an angle, revealing something that looks faintly like a fish fin on top of the phone.

Practically speaking, there’s probably not much here to distinguish this from the slider on the Find X, except that it also houses the flash and earpiece. With a wider base it looks like it might be slightly sturdier though (Oppo says it should last over 5 years at 100 slides a day), and the phone uses drop detection to retract the mechanism automatically if it enters free fall.

Of course, the point isn’t really the pop-up: it’s the screen. The Reno packs a 6.4in AMOLED panel (slightly smaller than the 6.6in screen in the 10x Zoom and 5G versions) that’s completely uninterrupted by any notch or cut-out for a selfie camera, with a screen that basically goes from edge to edge.

Whatever your opinion of notches, it’s hard to overstate the appeal of a proper full-screen phone, and while the Reno is hardly alone it’s still a major selling point over most other flagships – especially when the big names like Apple, Samsung, and Huawei still haven’t gotten there yet.

It helps that the display here is lush and crisp, with beautiful colours and HDR support. It’s not 4K, so in that alone it can’t quite match the top panels in some flagship rivals, but it really is a gorgeous display in person, and together with the lack of a notch or cut-out it’s one of the best panels around for watching videos or playing games.

As for the rest of the Reno, it’s flagship – for the most part. The design is line with most of this year’s other major releases, and Oppo’s own track record, with a coloured gradient finish to the Gorilla Glass rear – available in black, green, purple, or pink. It’s matt to the touch, so not as slippy or glossy as some glass phones can be, and the whole thing feels utterly solid.

One welcome touch to the physical design is that there’s no camera bump, with the camera lenses instead sitting underneath the rear glass, completely flush against the body. That’s similar to the recent LG G8 ThinQ, but there are downsides to the design: it’s super slippy, and it leaves the lenses vulnerable to scratches.

Oppo thinks it’s solved that, thanks to the questionably named ‘O-dot’: a silly name for a slightly raised spot beneath the lenses that will help the phone sit at a slight angle when on a flat surface, elevating the camera lenses to keep them scratch-free. It’s also surrounded by a not-so-subtle green gem effect, for good measure. It’s actually a great design touch – subtle enough that it doesn’t irritate and doesn’t make the phone rock from side to side while it’s lying down, but just enough of a raise the minds of the scratch-paranoid.

Speaking of those cameras, you get a 48Mp main lens (the same as the pricier Reno models), but it’s only backed up by a 5Mp depth-sensing lens, rather than the triple lens design of the Reno 10x Zoom and 5G.

From my brief testing photos seemed fine – colours were particularly strong, with plenty of light being let in by the sensor, but shots weren’t as detailed as you might hope for from a 48Mp shooter. It’s a healthy reminder that megapixels don’t make the camera, and the regular Reno seems merely good, but not great – though at this price that isn’t so unreasonable.

That’s one of the two areas where the regular Reno’s specs really lag behind its bigger brothers. The other is the processor: this is powered by the mid-range Snapdragon 710, rather than the cutting-edge 855 you’ll find in the other phones. That means this will lag behind slightly in the most intensive tasks, but in all honesty it will still be more than fast enough for most users’ day-to-day usage.

The battery is slightly lower here too, but the 3,765mAh capacity is still very solid, so this should last the duration. Factor in the rapid VOOC 3.0 charging (now quicker at charging as the battery gets close to full) and the Reno should be a winner for anyone as paranoid as us about dropping below 50%.

If you’re here for the camera then the Oppo Reno isn’t too exciting beyond that mega megapixel count. But as a cheaper way to get a full-screen phone with that wacky pop-up, it’s easy to see why the Reno might appeal.

The design is slick and the specs are solid – if not top-of-the-line – and if Oppo can keep the price around £500 for the UK release then this could be a contender as long as you’re not too worried about your phone packing the latest processor.