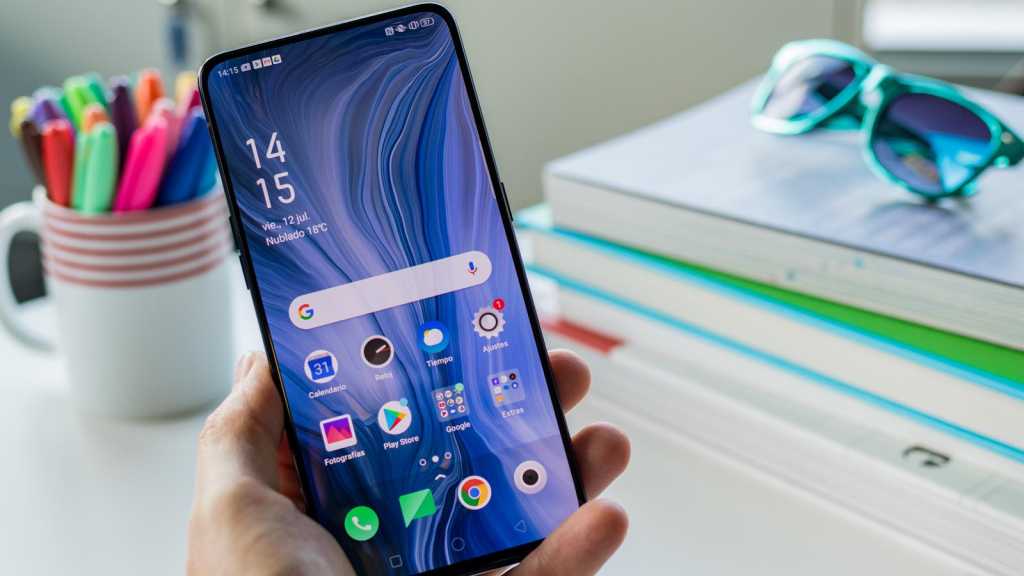 The Reno 10x Zoom feels a lot like the OnePlus 7 Pro, but trades that phone’s phenomenal screen for a better camera instead – a trade-off that’s likely to make sense for a lot of people. It’s got top specs, decent battery, and a slick design – as long as you don’t mind the shark fin.

Going by the name, there’s one thing that Oppo wants you to focus on with the new Reno 10x Zoom. Fellow Chinese rival Huawei might have beaten Oppo to the punch with the P30 Pro – which packs the same 10x hybrid zoom – but Oppo was technically the first to show the tech off when it demoed it at MWC 2019.

Throw in the new ‘pivot rising’ selfie camera, Snapdragon 855 processor, and amped up VOOC 3.0 fast charging and the Reno 10x Zoom looks like a pretty compelling 2019 flagship offering from Oppo, though does it hold up in person? Here’s what we think.

The Reno 10x Zoom costs £699/€799, though there are currently no plans for a US release – tough luck if you’re in the States I’m afraid. That price is close to the £649 OnePlus 7 Pro, arguably the closest comparison (partially thanks to Oppo and OnePlus sharing a parent company), but undercuts the £899 Huawei P30 Pro – currently the only other phone that can match it on zooming. Check out our guide to the best phones to see how it compares to the rest of the market.

The 10x Zoom isn’t the only model available though. Slightly confusingly there is also a £449/€499 regular Oppo Reno that’s actually quite different – in case the name doesn’t give it away, it lacks that fancy telephoto camera, but also has a smaller display and a slower processor.

Then there’s a more expensive Reno 5G, which is fundamentally the same as the 10x Zoom model but, well, has 5G support. That’s available from  EE and O2 in the UK.

So yeah, clue’s in the name: the camera is the star of the show here. The flagship Reno model boasts a triple lens set-up with a 48Mp, f/1.7 primary lens, backed up by an 8Mp ultra-wide angle and a 13Mp 5x optical telephoto.

It’s a similar design to the one that wowed us in the P30 Pro, though this time the sensors come from Sony rather than Leica – and there’s no 3D ToF camera to back up the depth-sensing capabilities. Then again, Oppo isn’t embroiled in an international trade controversy, so at least you can be confident you’ll get ongoing support with this phone, something that consumers are understandably nervous about with the Huawei phone.

The 10x zoom is driven primarily by that 13Mp 5x telephoto lens of course, but the Reno uses some clever digital trickery to make the most of the 48Mp main lens simultaneously, ultimately resulting in a lossless 10x hybrid zoom that looks about as good as if the whole zoom effect had been driven by the physical lens.

The default zoom settings are 1x, 2x, 6x (so even this throws in some extra oomph above the 5x lens), and 10x – though you can amp it up to an absurd 60x with additional digital zoom, but the quality begins to seriously drop off and stabilisation becomes a problem. It’s frankly impractical and unnecessary, but I guess Oppo had to do something to trump Huawei’s 50x effect.

Optical image stabilisation is there to help keep zoomed-in shots steady to a point, and seems slightly more effective than Huawei’s equivalent. Otherwise quality is broadly consistent between the two, and the differences actually come down less to the zoom and more to everything around it – the Reno’s sensor captures a little more light than the Huawei, resulting in more depth of colour even though it applies less digital saturation than the P30 Pro’s camera app.

There’s also the usual bevy of AI camera features to look forward to, along with ‘Ultra-Night Mode 2.0’ which uses AI, HDR, noise reduction and even face detection to produce detailed low-light shots that can ensure a “ruddy” skin colour according to the company. The camera does produce impressive low light shots, though it’s here that the image processing prowess of Huawei or the Google Pixel phones begins to pull ahead. The same is true of the portrait mode, which here is a little too aggressive and

As for video, the phone is capable of shooting in 4K at up to 60fps, and there’s support for 360-degree audio recording and Dolby Atmos playback on the stereo speakers – though it’s worth noting that they do sound a little weedy anyway, so don’t go buying the phone on account of the stereo sound.

The 10x zoom isn’t the only thing that’s exciting about the Reno cameras though – and the most eye-catching feature is shared across the whole range.

That would be the ‘pivot rising’ 16Mp, f/2.0 selfie camera, Oppo’s new twist on the pop-up. It’s the latest attempt to minimise the front-facing camera to give a proper full-screen effect, this time by having the whole camera-flashlight-earpiece apparatus rotate out of the top of the phone at an angle.

In practice, this is functionally no different to the vertical pop-up camera seen in the Oppo Find X or the OnePlus 7 Pro, but there’s a quirkiness to the design that’s undeniably appealing – it’s already been nicknamed the ‘shark fin’.

It also at least feels like it’s be a bit sturdier, spreading across the whole top of the phone, rather than just having a single spindly camera lens pop out. Oppo says it’s been tested to survive 200,000 pivots – over 5 years of use if you do it 100 times a day – and drop detection also means it automatically retracts if the phone falls.

What it’s really about isn’t the cool mechanism of course – though it is pretty cool – but the fact that it leaves that giant 6.6in AMOLED panel entirely undisturbed. It’s hard to overstate how appealing a properly full-screen phone is until you’ve used one in person, but it really does make it hard to go back to notches or punch-holes getting in the way of things – especially when you throw in an under-display fingerprint scanner too, as the Reno does.

It helps that the screen here is a good one: crisp, detailed, and with good colour reproduction, made all the better by being uninterrupted. It’s only 1080p, so in that sense at least lags behind the likes of Samsung or OnePlus, but the quality of the panel itself is hard to complain about.

The back of the phone looks just as good. The two available colours – Ocean Green and Jet Black – both come with gradient finishes underneath the protective Gorilla Glass 5 rear (there’s Gorilla Glass 6 on the front), and the rear cameras are built into the body so that there’s no camera bump at all, which is increasingly rare in flagship phones.

There is another bump though: to keep those lenses safe from scratches when you set the phone down on a table, Reno includes the suggestively named ‘O-dot’, which the company goes so far to describe as a “ceramic gem.” That’s a very fancy name for a small raised spot on the rear of the phone, designed to prop the whole thing at a very slight angle and keep the cameras ever so slightly elevated.

The whole rear comes in a matt finish so it’s not as slippy as some glass phones, and the whole build feels reassuringly heavy. There’s a USB-C port for charging and data of course, though no headphone jack.

Internally, you’re looking at a Snapdragon 855 processor, backed up by either 6 or 8GB of RAM and 128 or 256GB storage, depending on the model. Unsurprisingly, that results in very strong performance across all of our benchmark tests – though it’s worth noting that in our comparisons to the OnePlus 7 Pro and Galaxy S10 Plus below it has the advantage of rendering to a lower resolution screen, which is part of why it does so much better on the graphical tests.

Oppo’s already impressive fast charging has also had another upgrade. The Reno comes with VOOC 3.0 fast charging, which tops up the 4,065mAh battery pretty darn quickly – Oppo says it’s improved the algorithm so that the phone will charge faster as it gets close to full, when most phones begin to seriously slow down. In terms of actually battery life, it easily lasts a day of use, and will stretch to two if you’re careful.

Finally, software. Unlike OnePlus’s OxygenOS, which skews very close to stock Android, ColorOS is very much its own thing. Historically Oppo’s on-board software has been some of the most challenging around from a western perspective, but ColorOS 6 is a big step in the right direction.

It’s not quite the slickest or most user-friendly design around – the settings menu is confusingly structured, and I’m not a huge fan of the toy-ish icon design – but the average user won’t find a huge amount to complain about here. This is also another Android skin that leans a bit on iOS for inspiration, so might be more approachable if you’re jumping ship from Apple.

The Reno 10x Zoom feels a lot like the OnePlus 7 Pro, but trades that phone’s phenomenal screen for a better camera instead – a trade-off that’s likely to make sense for a lot of people. It’s got top specs, decent battery, and a slick design – as long as you don’t mind the shark fin.

Getting a Snapdragon 855 and a full-screen, notchless display for £699 is a good deal no matter which way you look at it, but the real sell is the triple camera array. With a 48Mp main lens and a 5x optical zoom that can simulate 10x thanks to software tricks, this is one of the few cameras on the market that can rival the Huawei P30 Pro.

The few downsides are that the AMOLED panel is only 1080p, the speakers are a bit wimpy, and ColorOS still feels like a bit of a work in progress – but for most people these will hardly matter at all.