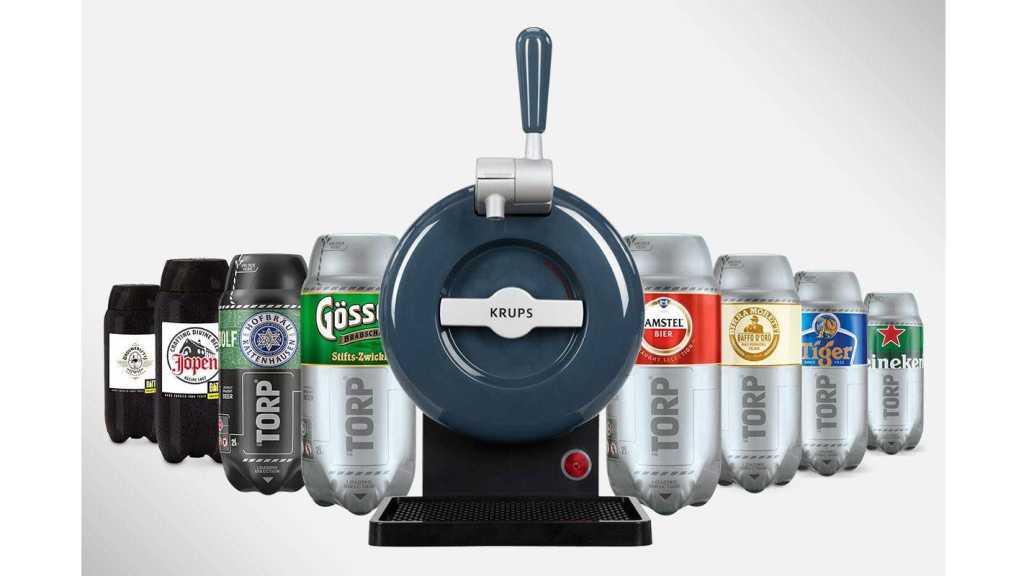 The Sub is a fantastic way to enjoy beer at home. It isn’t the cheapest way, but it’s still easy to recommend and the range of Torps is growing.

The Sub lets you pour a cold beer on demand, and keeps it fresh for up to 15 days. It’s the sort of thing you don’t know you want, but once you’ve got one, you won’t want to go back to cans and bottles.

The Sub has now merged with Beerwulf.com, so you now  buy a Sub from Beerwulf.

There are two models: the standard which comes in black, grey and red for £119 and a special Heineken Edition (£169), plus a compact model at £99 which – obviously – takes up a bit less space.

You can’t buy the Sub in the US: it’s only available in the UK, France, Belgium, Netherlands and Germany.

At these prices, the Sub is cheaper than the Perfect Draft, which is  £209 from Beerhawk.com.

Oddly, there are no bundle deals where you get beer or a glass at a discount.

Beer comes in 2L ‘Torps’ which we’re assuming is short for torpedo: you load them into the machine in a similar fashion. 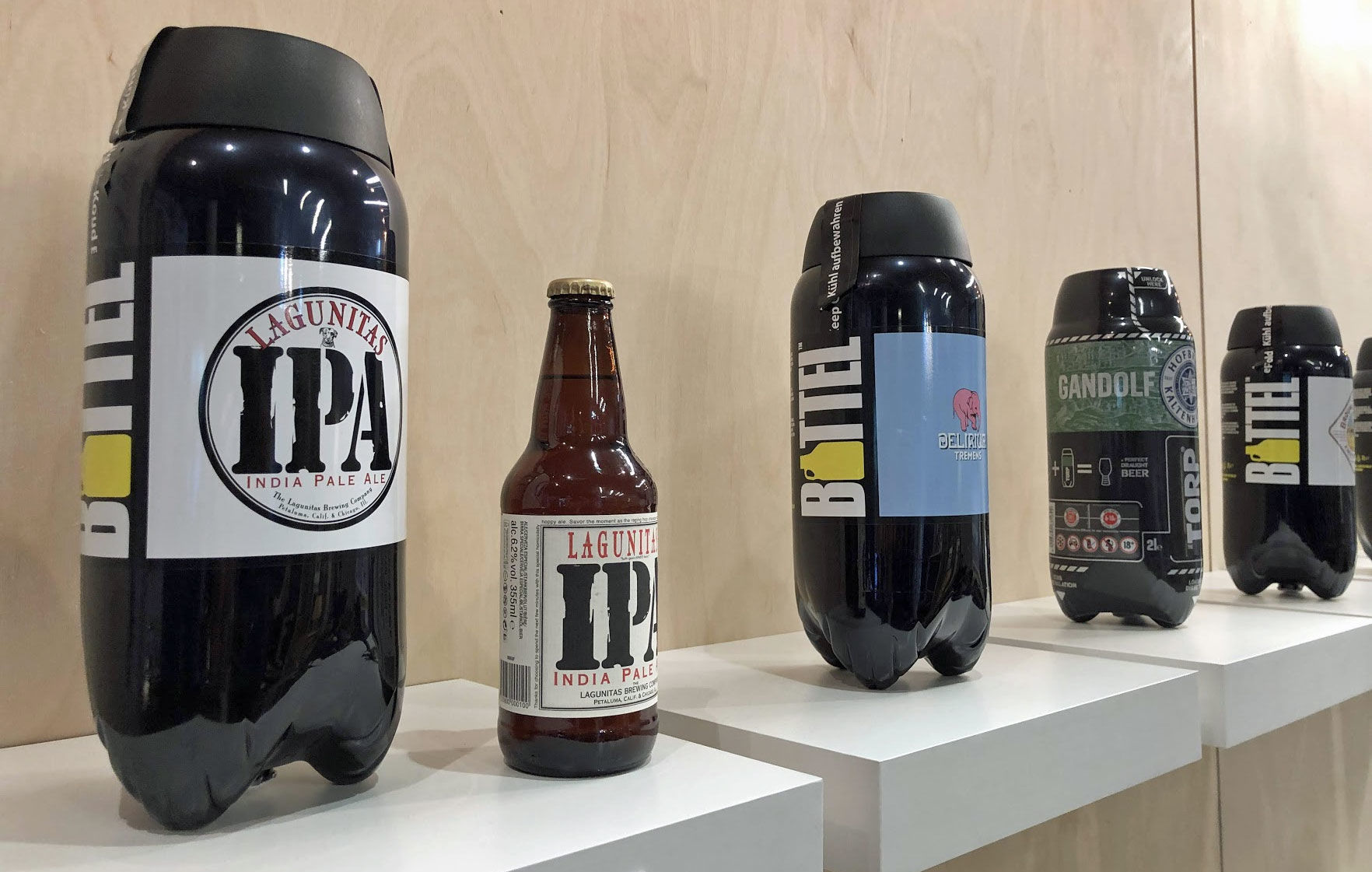 Torps range from about £6.99 up to £18.99 for premium beers. Currently there isn’t much of a middle ground between these prices, but the merger with Beerwulf means there should be a much broader selection in the near future. We’ll get to this a little later.

The Sub itself is manufactured by Krups – better known for its coffee machines – and unless you go for the Heineken Edition, has an almost entirely plastic finish. It looks good and is perhaps a bit larger than you might imagine, but will fit comfortably on standard-depth kitchen worktop.

The compact version is only smaller in width: 190mm versus 235mm, and is just as long at 455mm (but add on a bit for the drip tray which sits in front).

The reason for that is because Torps are a standard size. They’re a bit fatter and shorter than a 2L Coke bottle, and come with a plastic tube which clips into the top and routes easily into the spout of the machine.

Aside from mains power, nothing else is required. Unlike a pub, no CO2 is needed; a pump inflates a bladder inside the Torp to keep the beer at the correct pressure. 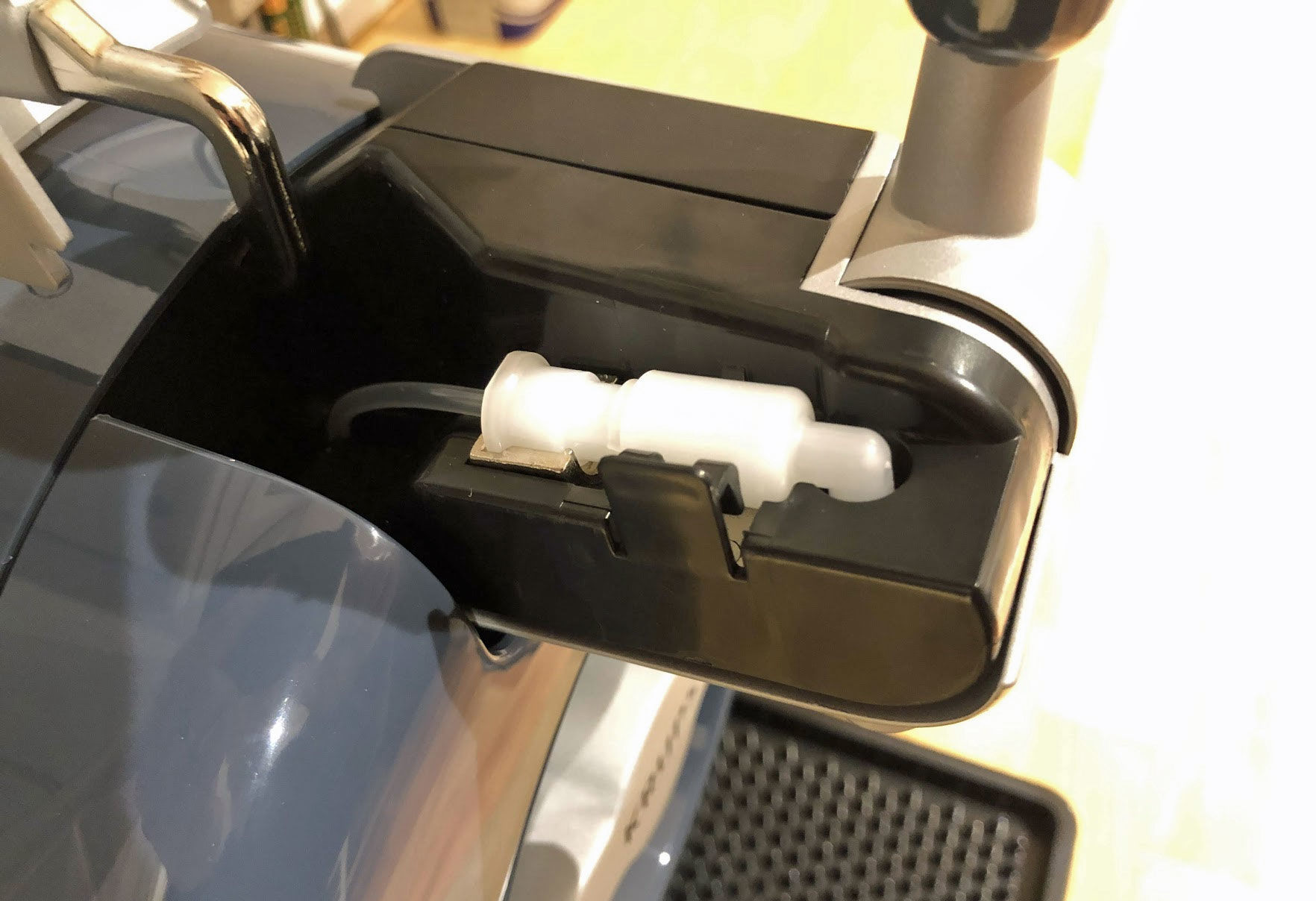 There’s simply a power button which lights up red when the machine is cooling the beer and turns green when it’s at the correct temperature which, in case you’re curious, is 2°C regardless of the type of beer.

Unlike the Perfect Draft, there’s no display to tell you how much beer is left, or a counter to show how many days are left until it’s no longer at its best. The latter is no issue, since you’ll probably get through a Torp in just a few days. The former is just a slight annoyance as you’ll want to keep a Torp or two in the fridge ready to replace the current one.

If you don’t keep them chilled it can take up to 14 hours, according to the manual, to cool the beer to 2°C, but straight from the fridge they’re ready to pour. There’s a cooling fan which generally runs near-silently, but is much louder when actively cooling. And the pump, which tends to spring into action after you’ve poured a pint, is quite noisy but only momentary.

Pouring a beer is as simple as pulling the handle, although there is of course an art to avoiding a huge foamy head. It’s recommended to rinse a glass in cold water before you start and hold it at 45° while you pour.

The first glass tends to be very foamy, but after that, we found it easy to pour a pint that looked professional enough. 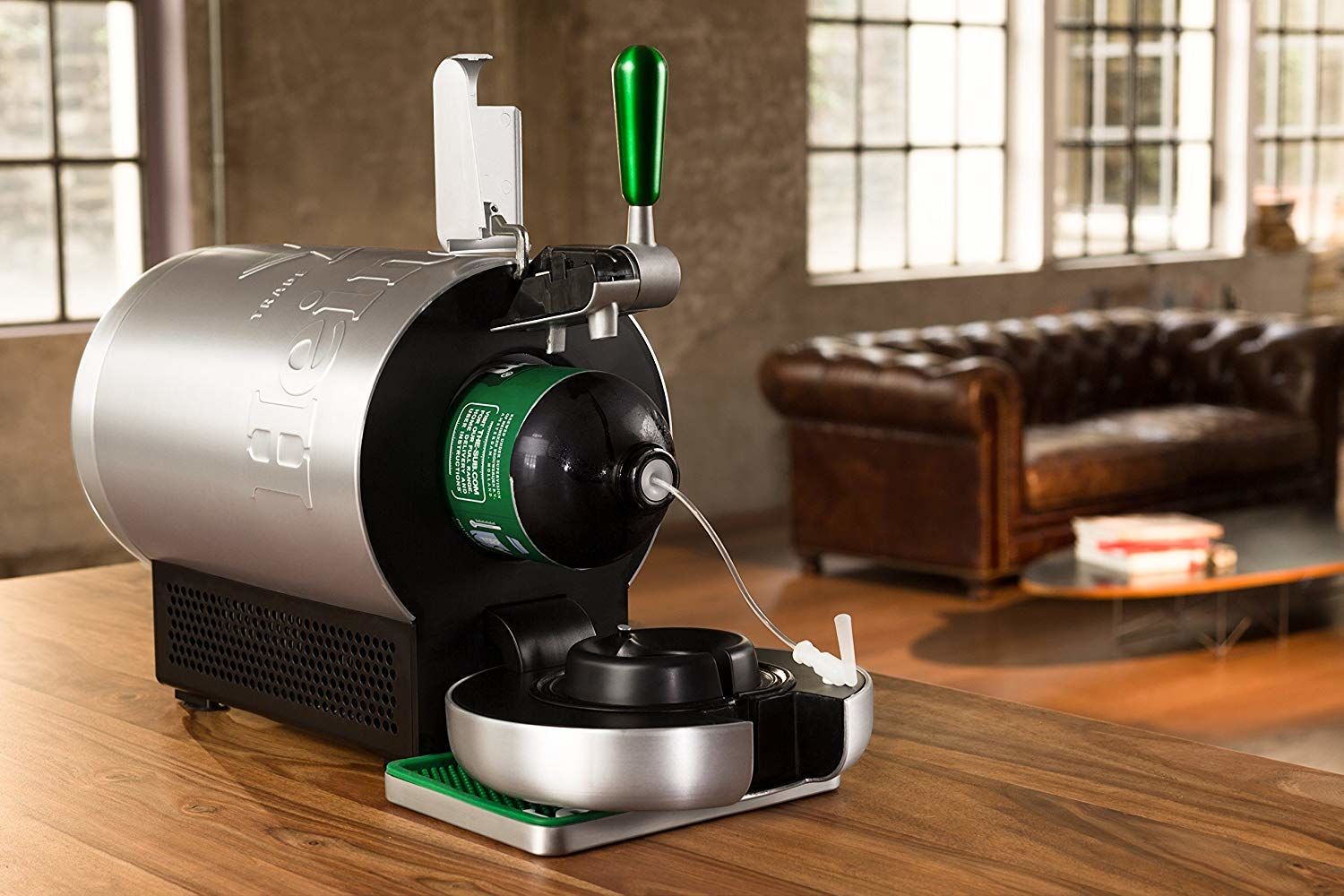 Compared to the Perfect Draft which takes 6L kegs, the 2L Torps for The Sub are rather small. You’ll get almost four pints out of one before needing to change it and while you might feel that’s not a lot, it means you don’t have to get through 12 pints of the same beer before you can change a keg in the Perfect Draft.

On the flip side, The Sub isn’t as good for parties: it’s more for personal consumption. And the beauty of such machines, compared to cans or bottles is that you can pour as much or as little as you like.

Freshness also factors into this, and while it’s definitely subjective, all the beers we tried from The Sub tasted great.

Many people simply want The Sub to drink lager, and it’s great for this. Your Heineken, Birra Moretti, Tiger or Amstel is perfectly chilled and ready whenever you are.

If you prefer Cider, there’s also Strongbow, and for the more adventurous beer drinker is a selection of Belgian beers, a couple of IPAs including Lagunitas and the excellent Jopen Mooie Nel. Newcastle Brown Ale is new to the range and is currently the only dark beer available: we’re told that stouts and porters are being considered.

Torps are only available online, which means you’ll have to add £4.95 delivery to the prices. Free delivery is only available if you order exactly eight Torps, not the ‘spend a minimum of £50 for free delivery’ you used to get before the Beerwulf merger. Plus, there are currently no discounts for bulk purchase beyond free delivery and virtually no offers on single Torps either.

We’d like to see Torps available to buy locally, ideally in supermarkets alongside the existing range of 5L kegs, but that’s very unlikely to happen any time soon. 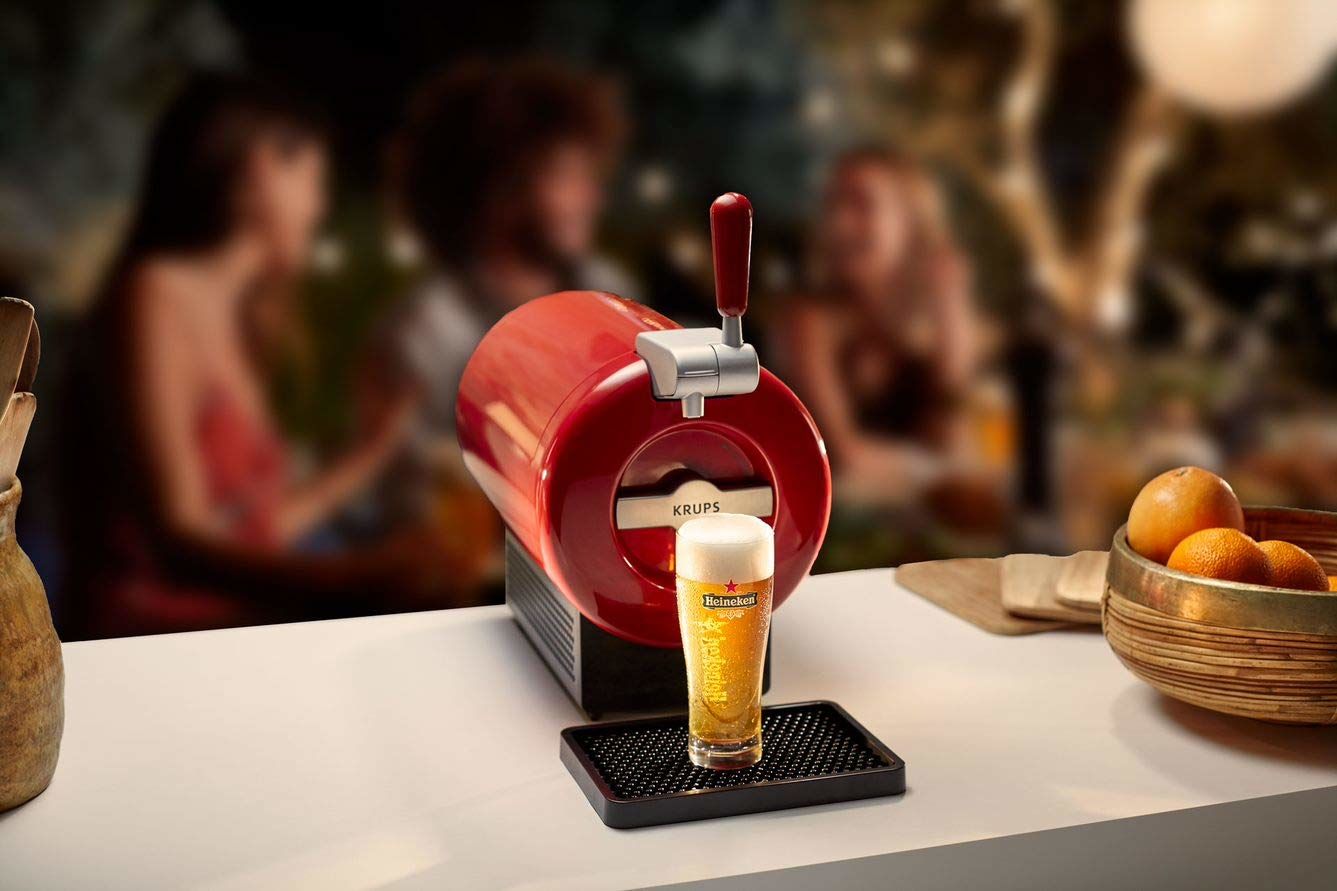 As mentioned at the top, Torps range from about £7 to almost £20. If these prices are hard to compare, the cheapest beers work out a fraction under £2 per pint, and the most expensive, such as La Chouffe, are over £5.30. Of course, you wouldn’t typically drink a pint of a strong Belgian blonde, and such beer costs a lot more to produce. In any case, it’s still more expensive than La Chouffe in a bottle.

More importantly, you won’t find such a price differential with kegs for the Perfect Draft. Whether you want Stella and Budwiser or Leffe Ritual and Goose Island IPA, you’ll pay roughly the same £30-35 for 6L. It means you’re paying a little more per pint for lager than with The Sub, but less for hoppier, stronger beers. Again, though, if you like dark beers such as porters and stouts, you won’t find them available for the Perfect Draft either.

The Sub won’t appeal to everyone, but it works really well and allows you to enjoy as much or little fresh beer as you like, whenever you like.

If you’re concerned about the lack of control over temperature, don’t be. Just pour your Delirium Tremens a few minutes before you want to drink it and give it a bit of time to warm up a few degrees.