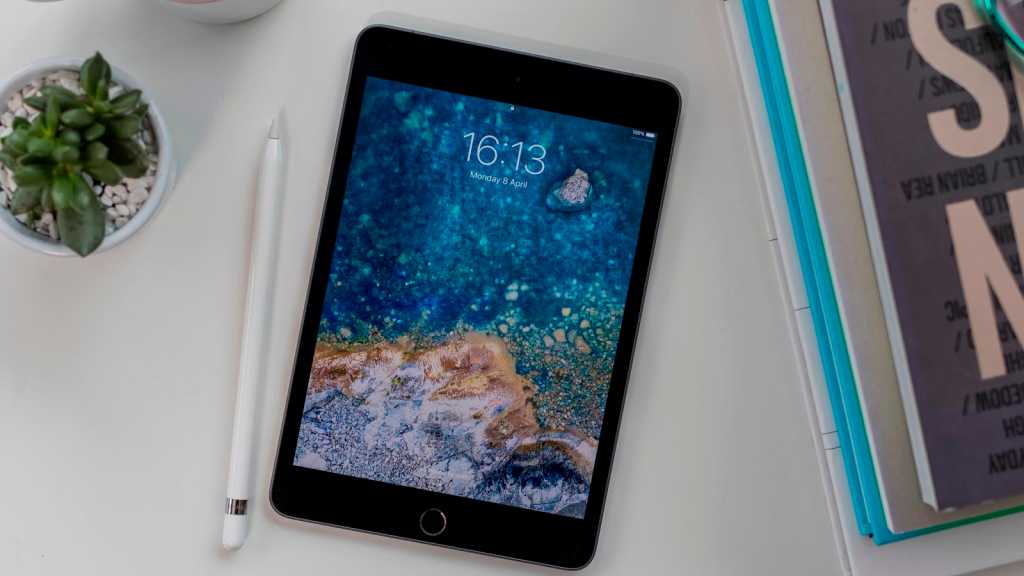 The iPad mini proves that this form factor is still desirable and useful even in an age of larger smartphones. With the A12 processor at an affordable base price, Apple’s smallest tablet is a tiny powerhouse of a computer.  Yes, the design is seven years old but with the addition of Apple Pencil support and with decent battery life, Apple has breathed new life back into the iPad mini. Not everyone wants or needs to spend £1,000 on an iPad Pro.

This wasn’t meant to happen. The iPad mini hadn’t been updated since 2015 and was left out in the cold, costing more than the larger iPads that were released since. We thought Apple had left it for dead.

The introduction of the 2019 iPad mini was a surprise – it’s barely different on first glance and yes, those bezels sure look huge after the last four years of consumer technology working towards bezel-less displays. But I was pleasantly surprised by the iPad mini during testing, finding that I picked it up way more often than I do with a larger iPad.

Using devices more is sometimes a bad thing, but this iPad lends itself to reading far more than it does scrolling through endless timelines. It’s not an iPad for Instagram or Twitter. It is, however, a great e-reader, news app displayer or Netflix enabler.

Unlike Apple’s other iPads, it’s not striving to replace your laptop, but instead quietly does some things better than one. If you don’t mind the ageing design, the smallest iPad could be a better option for you than any other.

Two things make the 2019 iPad mini a great iPad. One is its portability, and one is its sheer processing power.

Yes, we know this is basically the same design as the first iPad mini in 2012, but wait.

Ever since the 12.9in iPad Pro was introduced in 2015, Apple has concentrated on larger tablet displays. With 10.2in, 10.5in and even 10.9in iPads joining the standard 9.7in size, we’ve been led to believe bigger is better.

It’s no surprise given Apple, and everyone else, has done the same with their smartphones. But when I started using the iPad mini it reminded me of the pure convenience of a small tablet – something around the size of a book (and definitely thinner) that you can carry about unnoticed. It’s only 300g and displays most content better than your phone can.

With those phones getting bigger and better, you may have found your tablet use declining. But I found the iPad mini was irresistible because of its size and I used it in meetings, at home and on the bus far more than the larger iPads that I’ve reviewed over the years. It measures 203.2 x 134.8 x 6.1mm, thinner than an iPhone XS.

On the bottom are two stereo speakers which sound clear and have enough bass for a tablet this small but will get covered up naturally when held, particularly for landscape games.

The iPad mini is very powerful thanks to the A12 Bionic chip. This is the same processor found in the iPhone XS and XR, and means the iPad mini is the cheapest Apple hardware with this fast silicon inside. Despite the A14 Bionic having now been released, this remains an extremely capable chipset.

By this point, there’s not even much point in comparing it to the A8 processor in the  iPad mini 4 that this new model replaces – this one is so, so much better. At the time of release, it is practically the most powerful mobile chip money can buy.

But if you really must know, here you go:

Geekbench clocks the CPU speed and GFXBench measures the GPU – the latter shows the iPad Pro’s 120Hz frame rates at play, but note how much more powerful the 2019 iPad mini is than 2018’s larger, regular iPad.

We also compared it to the iPad Air announced on the same day as the iPad mini. The mini is excellent value for the performance you’re getting here. The most expensive version (256GB with 4G) costs £669/ US$679 – £100/US$120 cheaper than the cheapest iPad Pro.

Apple’s claim of 10 hours of battery life when ‘surfing the web on Wi-Fi, watching video or listening to music‘ proved accurate in our testing, though as expected I found it drained much faster when on 4G or video calling. I had to charge it about once every three days, but I also personally never let my tech get down into the red.

Inside the iPad mini’s frame, the A12 drives a ferociously fast operating system. iOS 12 undergoes more scrutiny when it’s on an iPad Pro and said to be able to replace a laptop, but when it’s running on the smallest iPad it’s undoubtedly the best software on a casual-use tablet.

I’ve reviewed many consumer Android tablets – none of them are preferable to the convenience and polish of an iPad.

On the iPad mini apps open and close instantly and games flow unhindered, even high-end demanding titles like Fortnite. It’s by far the best software experience on a tablet this small and is as smooth as 2018’s flagship iPhone XS, which cost around £600/US$600 more for the base model.

I haven’t been able to test iPadOS on the 2019 iPad Mini but I’d expect the impact on user experience to be similar to Apple’s larger slates.The need to release dedicated iPad software wasn’t such a pressing issue in this smaller form factor, but it’s nice to have. What’s more, iPads usually get software updates for more than 5 years, so you don’t have to worry about the 2019 iPad Mini not being supported anytime soon.

The LCD display is well-calibrated and laminated so it does not have a gap between the surface and the screen like the cheapest 9.7in iPad does. You also get True Tone for the first time on an iPad mini, so the screen (optionally) adjusts the white balance depending on the ambient light.

And while it supports the first-generation  Apple Pencil and the requisite apps, the screen doesn’t have Apple’s 120Hz ProMotion tech found in the iPad Pro models that makes scrolling even smoother.

Apple has admitted that it took ages to update the iPad mini because it assumed tablet buying would veer towards larger displays. In the tech world we knew that the ageing 2015 hardware of the iPad mini 4 wasn’t the best buy, but that didn’t deter people from still buying it because of the size.

There’s clearly still demand for a 7.9in display. Turns out most people don’t care about the large bezels.

You also get second-gen Touch ID which is excellently responsive. I didn’t miss Face ID all that much, though that might be different when it comes to an iPhone. The things I do on the iPad mini don’t really require it.

What I found more than anything (and this might not apply to you) is that the iPad mini managed to take me away from my phone and bring me down from my computer. It sits in the middle in size, but also in use case. This is why I like it so much.

What I mean is that I did not feel compelled to load up Twitter or Instagram on it because of the size. Instead I found myself opening the New York Times, Apple News or Feedly apps to read the morning headlines on the bus on a display that has room to breathe.

While doing this I pinged over to Pocket Casts and got a podcast on the go (yes, there’s a headphone jack!). Sure, I could have done these things on a phone but without the constant message notifications rolling in and a larger 16:9 display to enjoy newspaper style content on, I was personally chuffed.

My use of the iPad mini took me away from the mental burn out of social media and WhatsApp and provided me with a device that let me read and didn’t distract.

This was accentuated even more by the 4G review unit Apple provided me with (the cheapest iPad mini is Wi-Fi only). I put my second SIM in it and it meant that I could watch YouTube on the bus, check personal emails and research a holiday – again, things that we all do on our phones but is easier on a larger screen, but not a screen so large that I felt like an idiot for using it on the number 30.

One thing I personally did not use much was the Apple Pencil, which the 2019 iPad mini now supports. Apple’s suggestion that the iPad mini would make a great digital notebook is cute, and you may be someone who would genuinely use the tablet as a way to back up handwritten notes, and the advantage of cloud-stored notes is evident.

Apple would, of course, like you to own multiple iPads and flit between sizes as task dictates, but then again with two Apple Pencils that support different models, this is user hostile. If you wanted the iPad mini and a 2018 iPad Pro, you’d need both models of Pencil.

And sure, the second-generation Apple Pencil is ‘better’ but the first-gen Pencil is absolutely fine, and paired with the base iPad mini it’s the cheapest way to use one. I remain sceptical that many artists will opt for the iPad mini over the iPad Pro with its better display and larger digital canvas, but there might be a niche. It probably didn’t cost much for Apple to add the support to the mini and eke out a few more Pencil purchases from curious customers.

And yes, the iPad mini has a camera on the back. If you really want to be that person holding it at head height to take a picture of the Eiffel Tower then I’ll try not to judge you. The 8Mp lens is nowhere near as good as something on any recent iPhone, but it’ll do.

Better used is the front-facing 7Mp 1080p FaceTime camera. I used the iPad mini for a fair few video calls and it was a great experience. But any close inspection on still images from either camera shows these are not great quality photos, with a lot of noise when zoomed in.

The 2019 iPad mini starts at the same price as its ancient predecessor at £399/ US$399. This price gets you 64GB (256GB is also available) and represents an excellent upgrade and price considering the substantial internal upgrades.

Nonethless, that’s a huge price difference, and whether or not you need to spend (comparatively) bigger on the iPad mini depends on what you need a tablet for – Amazon’s Fire is basically a portal to Amazon services like Prime Video, and doesn’t let you use Google services.

On the other hand, while there are more expensive and more capable iPads, the iPad mini can do a hell of a lot more than you might think.

The iPad mini lives on in a very capable package that includes the blazingly fast A12 chip. It’s the cheapest hardware with Apple’s latest processor.

The ageing design is a downside, but this iPad design is a certified classic and we don’t think it’ll put many people off – it doesn’t us.

With a headphone jack, outstanding performance, Pencil support and unrivalled portability in the tablet market, the iPad mini is a surprisingly excellent upgrade on a product we thought was about to bow out.