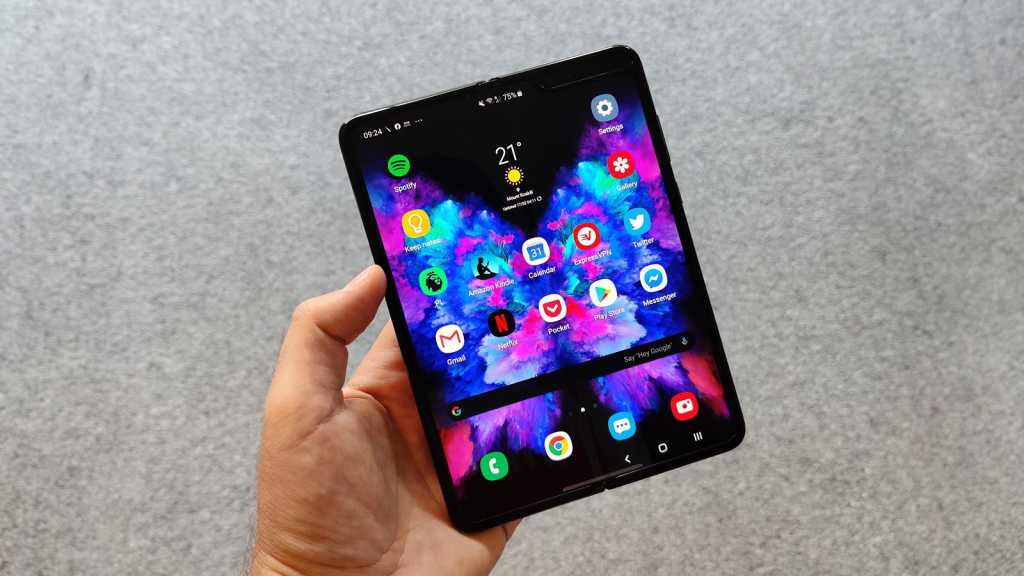 Even though the fact it folds is incredible, the Galaxy Fold is too bulky, breakable and expensive to recommend. The fact both screens are awkward sizes for most smartphone tasks means you have a delicate prototype of the possible future of phones.

In tech circles the Samsung Galaxy Fold’s story is now so well told that it seems odd to sit down to finally review the thing. A wave of hype followed by a faulty first product run and journalists with breaking devices before a fixed design and a quieter second launch.

We found it very hard to even get hold of a review unit. Perhaps for fear of negative reviews, or because it wants people to buy the Fold based on hype alone, Samsung didn’t give review samples to many of the UK tech press – forcing some to even buy their own.

Now that I have used one for the best part of three weeks, I can safely say that most people should not buy this phone. For all its astonishing engineering, top performance and excellent battery life, the trade off in form factor and fragility is not worth the asking price.

I reviewed a 4G version so can’t speak to the advantages of a 5G Fold, but the handsets are completely identical otherwise. You also get the first-gen Galaxy Buds in the box along with a clip-on case.

Folding phones are expensive but the Fold is the dearest, and that’s down to its sheer size and heft.

The design of the phone is the phone. The Galaxy Fold has a 4.6in AMOLED display on the outside when it’s closed that acts like a normal Samsung phone running Android. Except for the huge bezels.

But open it like a book and you have a tablet-sized 7.3in plastic OLED display. It’s quite something.

Samsung has opted for the book-like opening and hinge design to protect the inner screen, therefore needing an outer one to operate the phone when you can’t use two hands. This is the opposite approach to the  Huawei Mate X which we had hands-on with, whose outer display folds back on itself and is always on the outside.

But the Galaxy Fold’s outer screen has comically large bezels and the 4.6in display looks tiny considering the size of the phone overall (and the general increase of display sizes over the last few years) and is very hard to type on given the keyboard is so small with these dimensions.

Folded, it is the thickness of two regular smartphones but narrow enough to hold in one hand, at least. As you’d expect given the build there’s no waterproofing, nor is there a headphone jack but there is wireless charging built-in. A right-side mounted fingerprint sensor is present for secure app access.

The Fold’s party trick is its enormous square 7.3in internal OLED display. It runs a maximised version of Samsung’s One UI Android 9 Pie (no sign of Android 10 yet), and as you might expect from Samsung the AMOLED is very high quality. Blacks are deep, colour balance is great, and brightness is first class. We spent most of our time with the phone simply marvelling at the fact it works.

It has a slight jelly scrolling issue (across the whole screen, not where it folds) where animations wobble somewhat, and it’s most noticeable on apps like Twitter.. It doesn’t affect daily use but if that sort of thing annoys you, steer well clear. It’s not an issue on any other current Samsung flagship.

The fact the Fold runs One UI, Samsung’s smartphone software, is an important point. At 7.3in this is a tablet sized screen, but it’s running Android for a phone. It means that in apps like Twitter and Instagram, it actually fits less on the screen than a normal modern smartphone can.

This being a plastic screen there is a lot of reflection, and there is a visible crease down the centre where it folds. Even when fully flat you can still feel a bump. This isn’t a full-on criticism as it’s necessary for the whole thing to work, but you can’t just ignore it. It visibly divides the screen in most lights so regularly attracts attention.

Couple it with the insane volume of smudgy fingerprints that the plastic screen collects and you’re a far cry from a pristine, flat glass display of a tablet – no matter how impressive the folding engineering feat itself actually is.

The foldable display was made possible by creating a display 50% thinner than the one in the  Galaxy S10. It’s a three-layer composite with a polymer layer and an adhesive layer on top of said display. It’s something of a miracle it works at all but that is not to say it is preferable to a high quality, large glass panel. The Z Flip has a harder glass infused layer that means, according to Samsung, it’s more durable. We think it’s the first foldable that doesn’t feel flawed.

Conversely, the Fold’s main display can pick up permanent indentations from even a fingernail. Despite the screen being protected when closed, this is far from ideal on a device this expensive. Samsung updated the old, breakable design by tucking the outer layer of the display under the bezel (mad that it wasn’t like this originally) and put T-shaped caps at the hinge to keep dust and debris out.

The hinge can only hold the phone fully closed or fully open and flat. Anywhere in between and it flails around like a sail in the wind. The Z Flip is more like a laptop and can be open at any angle you like.

I didn’t do any damage to the Fold in my time with it, but I did treat the thing with kids gloves. With a plastic main screen and no waterproofing this is not a phone for the clumsy.

Not by the book

Even though the Fold is a bulky, choc ice of a thing when closed I can’t help but like the fact it’s different. The outer screen is ludicrously small but there’s something futuristically cool about taking calls with the earpiece on the front, hanging up, and then folding the thing open to bash out some emails.

Maybe Samsung marketed the Fold wrong – it works well as a next gen BlackBerry replacement given triaging email works a dream with the large display the best use of space by any app is Microsoft Excel.

But for those of us who aren’t number crunching CEOs, most tasks become annoying thanks to the envelope-pushing design. Texting is actually very annoying on the Fold, with the outer screen too poky to view much content and our thumbs covering several letters on the tiny keyboard.

Samsung’s default keyboard (with amazingly good haptics depending on the keys, bravo) has a split option that moves the keyboard’s halves out and closer to your thumbs but it’s not easy to get used to. I found it hard to touch type, something autocorrect helps me achieve on smaller phones and smaller keyboards.

Thankfully the Fold is an absolute powerhouse. Its performance is excellent with the Snapdragon 855 chip and a mammoth 12GB RAM, while the battery life from the 4,380mAh is exemplary. I took the Fold on a trip from New Zealand to the UK and it dealt with the 30 hour journey both ways for watching films, listening to music and podcasts and roaming on the layovers and I didn’t have to charge it once.

I’ve never had that with any other phone on a trip that long and it’s low-key one of the best things about the Fold.

Gaming is a treat on the big screen and is the one thing that canes the battery life. Games like Fortnite and Asphalt 9 sort their aspect ratios out and are great to play, making the Fold a good gaming choice and a perk Samsung hasn’t much highlighted, but I understand that marketing a phone on its twin gaming and spreadsheet merits isn’t a succinct strategy.

The Fold’s other trump card is its cameras. Although they are nothing new and are the exact same three rear and two front cameras as the Galaxy S10 Plus, the Fold’s screen acts as a superior viewfinder. The ultra-wide, main and telephoto lenses come into their own and are more fun to use in 4:3 on this screen than any regular smartphone.

Photos have the usual Samsung saturation that is Instagram-ready but quite true to life. I imagine if you want to buy a Fold, the camera quality won’t be your number one concern, but rest assured if you take the plunge then you’ll be happy.

It feels reductive to review the Fold like a normal phone, as I’m not even sure I can call it a phone in the first place. Given the internal screen, really this is a tablet first that can fold down into a (just about) pocketable device that can also happen to make calls.

The device is a chunky, awkward phone that then folds out into a dinky tablet that it’s hard to type on. Surely Samsung is onto a better thing with the Z Flip, a phone that is a normal size when open that folds down into something half the size.

With the Fold, all its controversies and fragility aside, it is a £2,000 device with two screen that are both slower and harder to use than a phone that costs up to a tenth of its price. Unless you’ve got a ton of disposable income or simply must have the latest tech, it’s not worth the trade-offs.

This isn’t like the iPhone in 2007 when it was immediately obvious that all phones would end up looking like it. Samsung has made the Galaxy Fold because it can, not because it should.

It means the Fold is a device that limits the user rather than helps as it has two displays that are harder to use and less content-friendly than a normal single smartphone screen.

Performance, battery life and the camera experience are the best things about the Fold, but they are things that regular smartphones can do as well or better for around half the price.

This has been a difficult product to review that I can only sum up this way: The Galaxy Fold is amazing. Don’t buy it. We think the Galaxy Z Flip is sturdier and more logical than the Galaxy Fold.