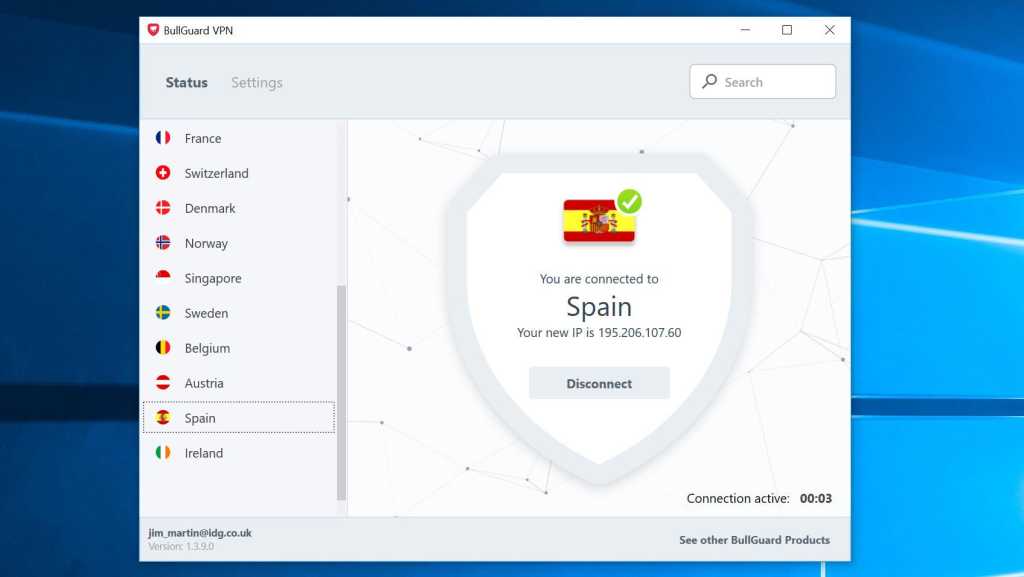 Bullguard’s VPN service achieves what it sets out to do: offer online privacy that’s extremely easy to use. However, it’s rather limited in terms of the variety of devices it supports and the locations you can connect to when compared to some of its rivals.

Bullguard is another antivirus company that’s expanding its range to offer a VPN service. And like Bitdefender, it has partnered with an existing VPN provider to do this, rather than create its own network of servers from scratch.

The approach makes some sense, as it clearly costs a lot less and lets Bullguard offer a branded service that’s already mature. The company it has teamed up with? NordVPN, one of the best VPN services around.

The shortest duration you can  subscribe for is six months, but you can also sign up for a year and there are bigger discounts for committing for 2 or even three years. If the lack of a trial or a single month subscription worries you, there’s a 30-day money-back guarantee so you can effectively test the service for free and cancel for any reason.

You can get a 25 percent discount if you’re an existing Bullguard customer running one of its antivirus products. Unfortunately this is only valid against the one-year subscription, which makes the monthly price £3.98 / $4.94. That’s not bad, but it isn’t the cheapest around.

Payment is via credit card or PayPal: there are no anonymous payment methods offered.

A single subscription lets you use the service on up to six different devices at the same time. Currently there are 16 countries to choose between:

Bullguard offers apps for Windows, Mac, Android and iOS. That’s the key four covered, but there’s no Fire TV app or browser extensions. Interestingly, there’s nothing to indicate that the service is powered by NordVPN, either.

The good news is that these are standalone apps which don’t tie you into using Bullguard antivirus as Bitdefender’s VPN does. Also, although you have a more limited choice of locations compared to NordVPN, you still get the core set of features including a system-wide kill switch, plus the option of configuring the kill switch so only apps you choose are terminated if the VPN connection drops for any reason.

Factor in Bullguard’s clear  no-logs policy which states that absolutely nothing is logged whatsoever, and you’re getting a very secure service.

You can read the privacy policy but here’s the relevant part: “BullGuard guarantees a strict no-logs policy for BullGuard VPN Services, meaning that your activities using BullGuard VPN Services are provided by automated technical process, are not monitored, recorded, logged, stored or passed to any third party. We do not store connection time stamps, session information, used bandwidth, traffic logs, IP addresses or other communications data. Only basic payment information is processed through our payment processing partners.”

It also says, again very clearly, that it does not condone the use of the service for any illegal or illicit activity, by goes on to clarify that it doesn’t monitor activity and would only know if you are doing this if you notify Bullguard about it yourself.

The fact that Bullguard is based in the UK will be a red flag for some, but even though this is one of the “14-Eyes” countries, there are no logs to share or hand over to authorities in the first place.

Although there’s nothing to suggest the service is powered by NordVPN, the apps are very similar to Nord’s. The settings in the Windows app, for example, are the same so you can’t switch protocol but you can force it to use TCP instead of UDP if you find a particular connection very slow.

Testing VPN speeds is never easy as there are so many factors involved. We already know that NordVPN is fast, and we saw respectable speeds when connecting to UK and US servers. The only time we experienced unacceptable performance was when trying to use a server in Australia. Speedtest reported a download speed of 0.6Mb/sec and upload of 0.2Mb/sec. Reconnecting 30 minutes later saw only a slight improvement to 2Mb/sec down and 0.6Mb/sec up.

There’s no option to pick a server: this is selected automatically for you if there are multiple servers available in that country. There’s also no way to pick a server optimised for streaming video or P2P and we found that while we could reliably access Netflix US, BBC iPlayer refused to let us watch anything when connected to a UK server.

EDIT: Bullguard asked us to re-test iPlayer compatibility and sure enough, when connecting a UK server we were able to access iPlayer just as we were when using one of NordVPN’s UK servers via Nord’s app.

Tech support is provided by Bullguard, and there’s 24/7 live chat. We tried it out and got quick, detailed responses to our questions.

One of the questions we posed was whether Bullguard supports BBC iPlayer. We were told to contact BBC’s tech support to determine whether VPN connections are supported, which was unfortunate. It’s well known that the BBC actively bans IP addresses of known VPN servers, and providers play a cat-and-mouse game of renewing IP addresses to get around these crackdowns.

Bullguard then confirmed later in an email to day “We are not actively marketing BullGuard VPN as a way to bypass geo-restrictions, our focus with VPN is to provide an easy to use product for the broader market to protect their privacy – coupled with BullGuard’s premier 24/7 live support.”

Bullguard VPN is a better offering than Bitdefender Premium VPN. But it’s impossible to overlook the fact that most of the plans cost more per month – even with the 25 percent existing customer discount – than if you were to go direct to NordVPN. And you get more from Nord: a larger selection of countries, the ability to choose specific servers, an app for Fire TV, a double VPN option and more. Ultimately it’s hard to recommend Bullguard’s service over Nord’s.