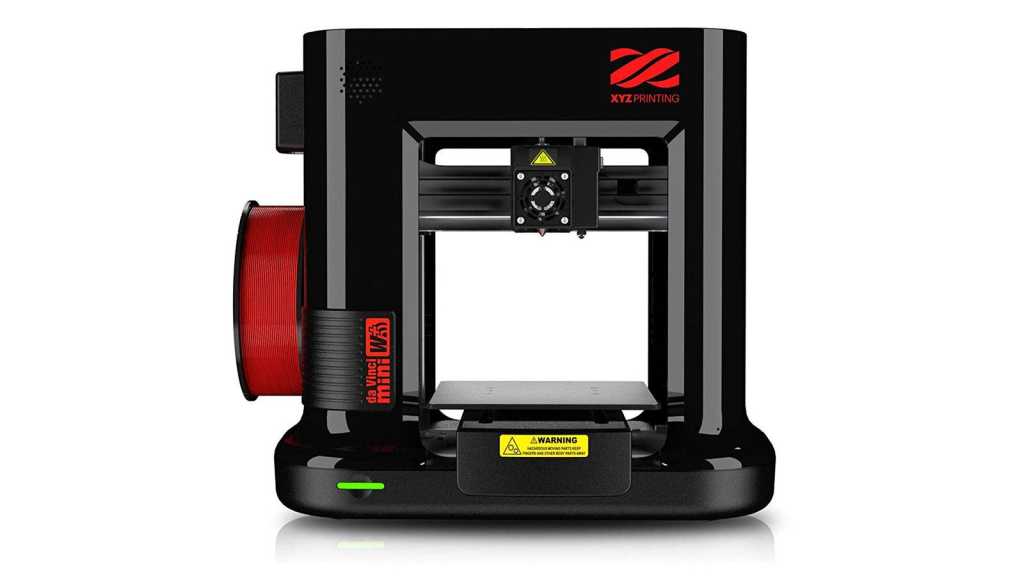 As 3D printers go, this is one of the easiest and simplest to use. Don’t expect perfect prints, though, and be prepared to pay over the odds for filament.

3D printers are now available at a price that’s affordable for home users to experiment, but the sheer choice of printers can be confusing. XYZprinting has a lot of models in its range, but the da Vinci mini W+ is the one which will surely appeal most.

Unlike many 3D printers at this level, you don’t have to assemble the mini W+. Aside from removing some packing materials and protective tape, it’s basically ready to print.

And while others have a steep learning curve to get good prints, the da Vinci is largely automatic and doesn’t require the user to dial in the best settings.

It does have some drawbacks, but as a first 3D printer, there’s a lot to like.

600g reels of filament cost around £16 / $27 and come in various colours. They’re derived from corn starch, making them bio-compostable and non-toxic.

If you’re willing to upgrade to hardened steel nozzle – or buy the printer with one fitted to start with – you can use the metallic PLA which offers a metal-like finish to prints.

Unlike many 3D printers which look like industrial machines, the da Vinci could be (and has been) mistaken for a sewing machine. We were sent the black version, but the orange finish will stand out a lot more. 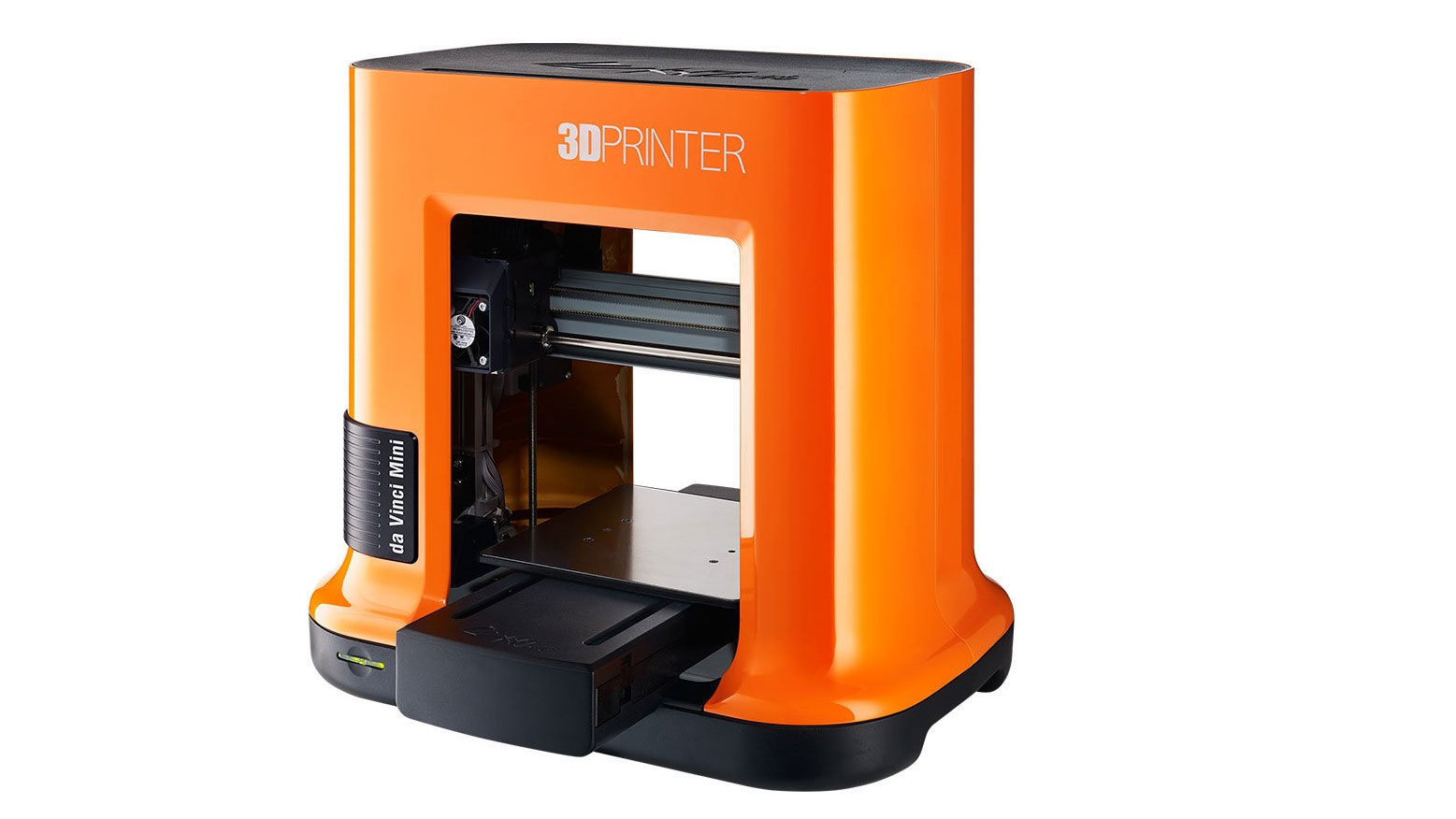 There is a small amount of assembly required: you have to install the extruder, attach the ribbon cable and the filament guide. A 300g starter reel is supplied, and it’s easy to load this onto the machine once you’ve removed a plastic panel and extracted the hanger.

The printer is designed to be hooked up to a PC via USB, although you can enable Wi-Fi if you really don’t want to use a wire. You’ll have to use a USB cable initially to set up a wireless connection. We didn’t test this but have seen several recent reports that it can be a faff to get working and, since you risk wasting the costly PLA filament, it’s more sensible to just plug in the supplied USB cable.

The instructions are, unfortunately, out of date and tell you to download XYZMaker, but the up-to-date advice is to get XYZPrint and XYZWare.

However, XYZMaker includes a 3D creator / editor and uses XYZPrint as a plugin for slicing (the process of making a 3D model printable) and handling the actual printing and maintenance. Annoyingly, both apps nag you to log in to your XYZ account, but you can dismiss the window and carry on anyway.

The mini w+ has a printable area of 150 x 150 x 150mm, or 5.9 x 5.9 x 5.9in if you work in old money. The bed is aluminium and isn’t heated. To compensate for this, several sheets of tape – like masking tape – are included in the box and XYZ recommends you apply Pritt Stick-type glue if the room temperature is below 25C.

It’s capable only of printing with PLA filament from XYZ: it won’t work with other brands because of the RFID chip in the official XYZ reels.

There’s no display on the printer, nor any way to print from a memory card or USB stick: everything must be sent from a computer.

It would be much more useful for first-time users if there were a step by step guide to making your first 3D print, but the instructions skip over how to place one of the stock 3D objects on the canvas and then print it. But once you’ve figured that out for yourself, you can re-join the instructions and learn how to start the print plugin, prepare it for printing (that’s the slicing process) and actually start printing.

The mini w+ calibrates itself, so you don’t have to worry about such things as the z-offset or whether the bed is perfectly level. And we were impressed with quality of the first couple of prints.

You will quickly find the limitations of the mini w+, and 3D printing in general, though. It doesn’t like printing very small objects with fine detail, so you’ll have to experiment with scaling until you know what is the minimum size you can print a section of a piece.

You can change the size by entering dimensions in mm or inches, but there is no option in the XYZ software to scale by percentage, which is a bit annoying. 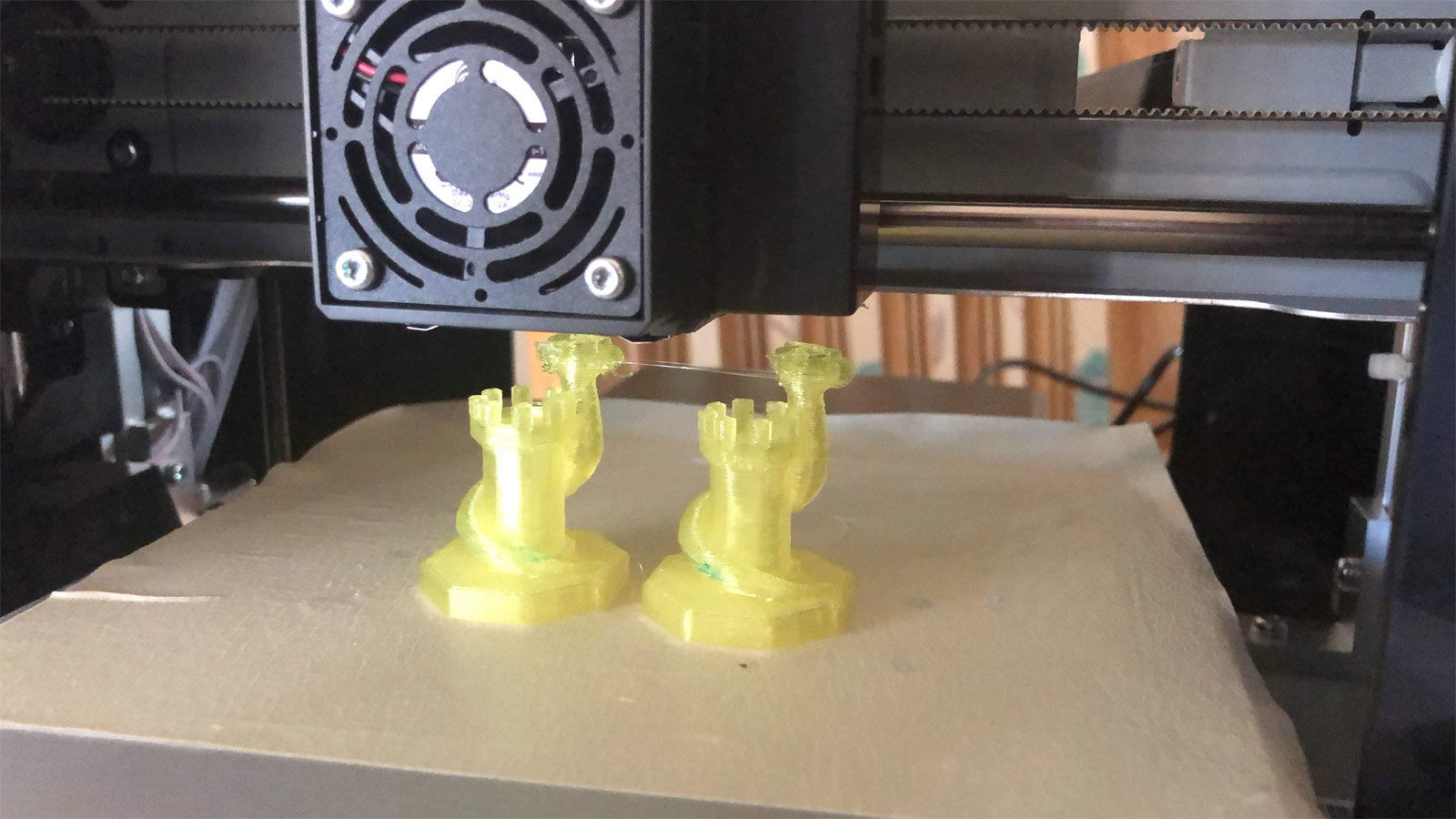 As soon as you print anything which needs supports – a 3D printer cannot print into thin air of course – you’ll realise you need to put some effort into learning how the settings work in the XYZPrint app. Here you’ll find toggles to enable supports, rafts and brims along with settings for each.

Supports are generated automatically, but they can be difficult to remove from the final print if there’s poor access, or it’s very small. Rafts and brims can be useful if your print won’t remain stuck to the bed for the duration of the print.

The software tells you how long a print will take at your chosen settings, and if you return to the right tab after hitting ‘PRINT’ you can track its progress.

We printed various test models and found the print quality generally good. However, quality does vary depending on the complexity of the model, and it is common to find ‘spaghetti’ hanging where there isn’t sufficient support and ‘zits’ or blobs of plastic where the extrusion isn’t perfect. 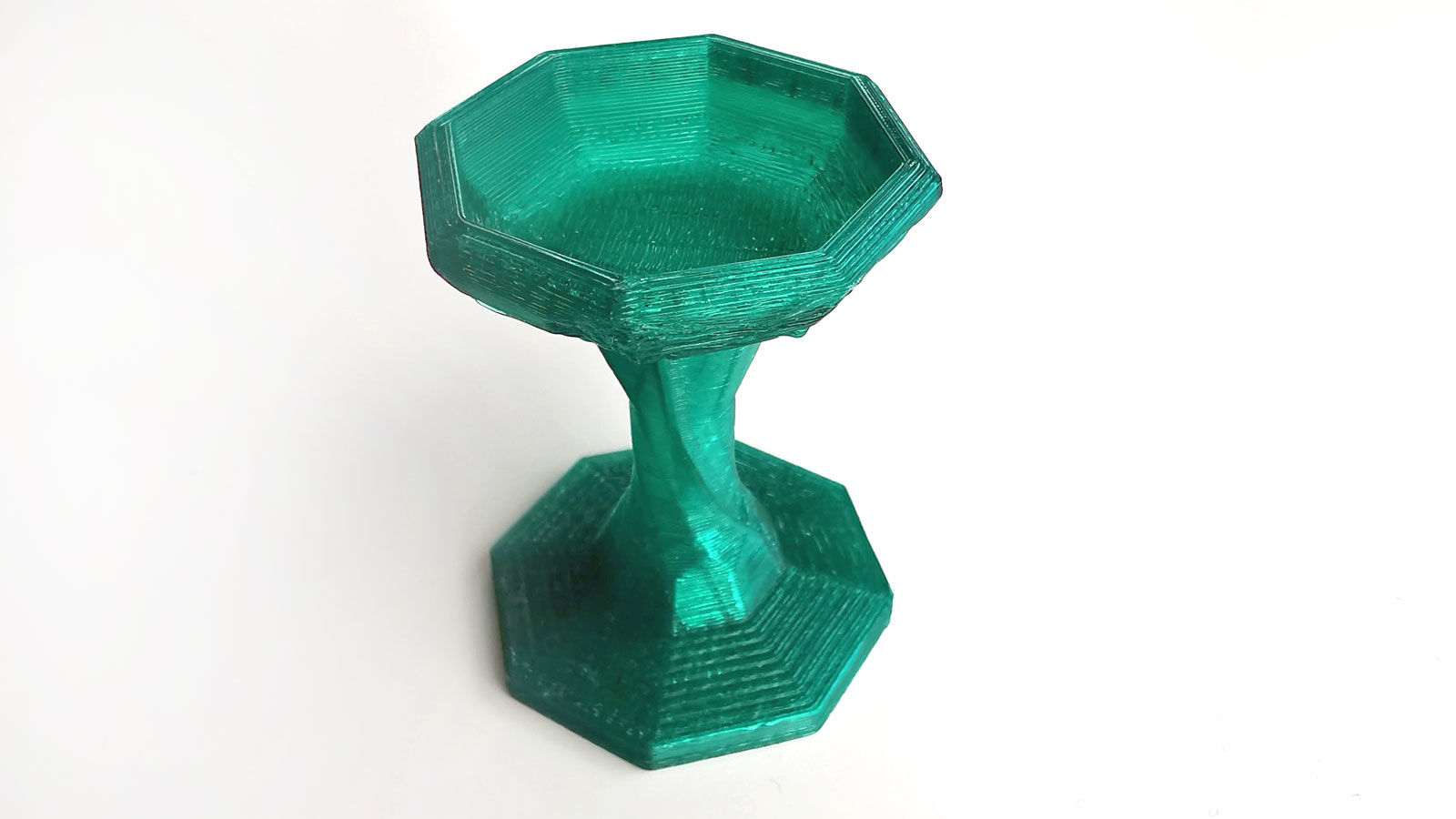 We also found that, while it’s fairly easy to unload the filament and change it for another colour, blobs of the old colour would randomly appear in prints, mostly ruining them. This can happen even after quite a few prints and many metres of the new colour have been used, such as in the Toy Story alien: 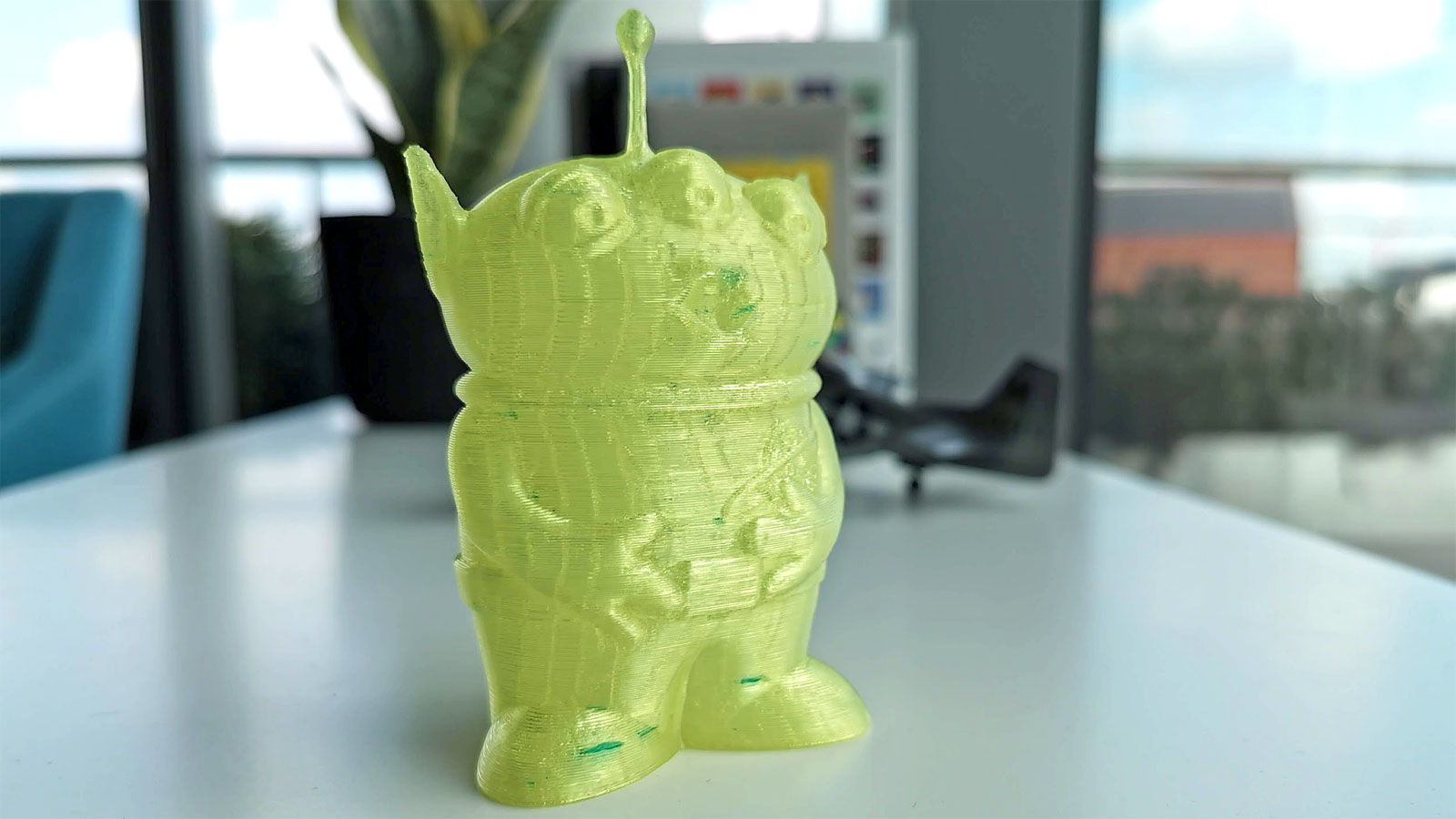 Another issue was adhesion to the bed. In cooler temperatures, you run the risk of the model coming unstuck from the bed in the middle of printing. When this happens unsupervised, the extruder spews out filament like a spider’s web and wastes it. So it’s a good idea to keep an eye on prints so you can stop them if they fail.

We printed a good selection of models and found that some printed well, such as the well-known 3DBenchy boat, while others, including a  3D Surprise Egg, failed. In particular, the articulated sections were welded together instead of being separate, so it was impossible to open the printed egg. 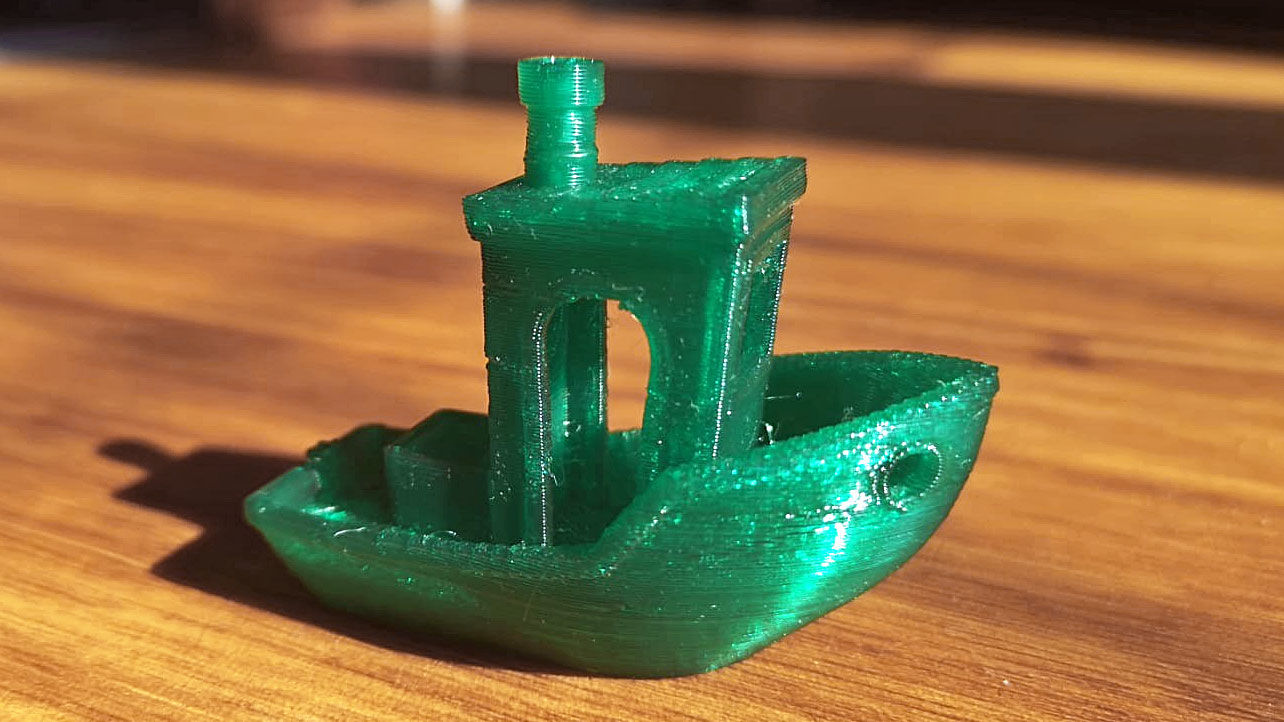 The button on the front can be used to pause printing, and you can clear any problem areas before resuming. Don’t leave it paused for over three minutes, though, as the print will be cancelled.

There are lots of free apps for 3D printing and slicing, but you’ll struggle to use any of them with the mini w+. That’s because it uses a proprietary protocol and doesn’t install a printer driver in Windows: the software communicates directly.

So when XYZ’s tech support told us to use Microsoft 3D Builder to print a model which caused XYZprint to crash, we discovered that it isn’t actually possible to do that: it can’t ‘see’ any 3D printers installed.

It’s tempting to liken the da vinci mini w+ to an Apple product, as you’re effectively in a walled garden, limited to using XYZ’s own filament and software. There are pros and cons of this approach: it’s easy to use, but you’ll fairly quickly feel the limitations of those walls and potentially wish you’d picked a different printer.