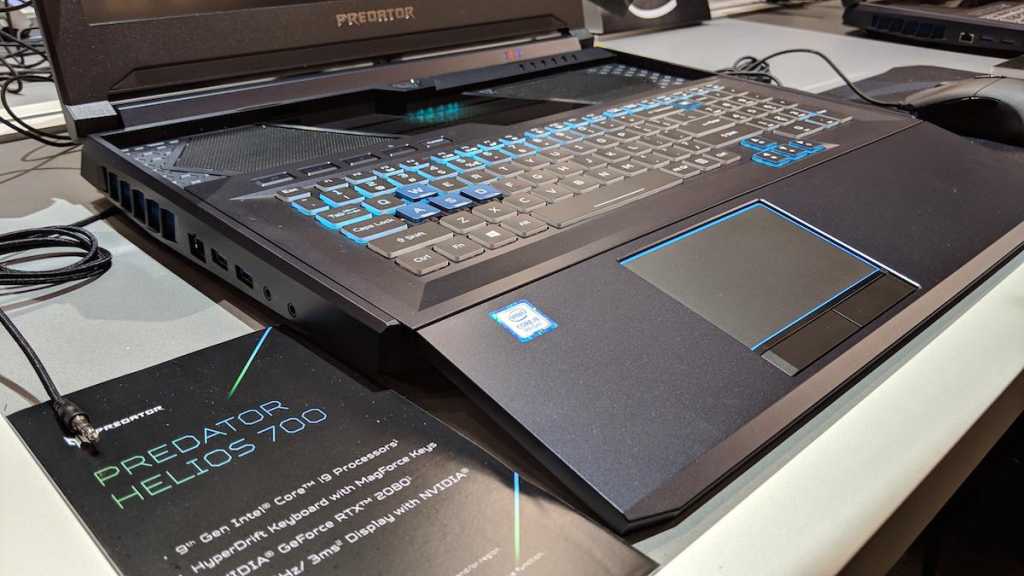 It’s expensive and a bit bonkers but that’s what Acer does with some of its gaming laptops. Whether you actually want or need a moving keyboard is a good question but it does seem to make sense with the large screen and cooling. There are some high-end specs here so this looks like a power-house desktop replacement and we’re intrigued by the the MagForce keys. We’d perhaps like the option for a 4K screen, though.

The Helios 300 might have been given a spec refresh for 2019 but the new Predator Helios 700 is far more interesting with its HyperDrift movable keyboard and MagForce keys.

It might be cheaper than the crazy £9k Predator 21X but the Helios 700 is still not one for the feint hearted.

This laptops starts at a whopping £2,499 due to its nutty design and high-end specs. It will arrive in July and the European price is 2,699 Euro.

It will arrive earlier in the US, with shipping in April at $2,699.

We’re used to phones occasionally having a sliding keyboard but it’s a new one on us for it to appear on a laptop.

The Helios 700 has a HyperDrift keyboard, which sounds like something from a Need for Speed game but it essentially means you can move the keyboard from its original position.

When the laptop was announced we thought this was a motorised movement. It’s not which is a shame but it’s still pretty cool and comes complete with some cheesy sound effects.

You simply slide it towards you and the trackpad is on a hinged section creating a sort of ramp. This provides somewhere to support your wrists while you’re gaming or just using the laptop generally.

It also means you can sit slightly further away from the large 17in screen for a more comfortable experience, but also reveals a striking and stylish blend of mesh and glass. Our main worry is that there’s no way of fixing it in so you don’t accidentally move it.

Here is where the Helios 700 holds most of its cooling elements including two of Acer’s custom-engineered 4th-gen AeroBlade 3D fans, five copper heat pipes and a vapour chamber.

It looks pretty cool and you can hit a Turbo button to get things going. Even in the loud demo area the fans were easy to hear, which is a tad worrying.

Apart from this being something of a beast – 41.7mm ad 4.5kg – so its not exactly portable, the Helios 700 has something called MagForce keys. You can replace WASD with special keys which use analogue switches instead of traditional linear ones.

This means they feel like gaming controller triggers, so you can press them however much you want – they’re not just on or off. Acer says this gives you more control over precise movement while gaming.

They feel nice but we’ve yet to test them with a game and see how they can be configured. We like the idea of using them to accelerate or brake more accurately in driving games like pedals but that might not be possible.

As you’d expect from a laptop this pricey, the Predator Helios comes with a rip roaring spec sheet.

For starters there’s a 17.3in screen with a Full HD resolution and the combination of 144Hz refresh rate and 3ms response time. It’s nice but a 4K option would be nice for those that want it, mind.

Under the movable hood, there a 9th-gen Intel Core i9 and either an Nvidia GeForce RTX 2070 or 2018 and we’re talking Max Q design here.

That’s a lot of performance, but we haven’t been able to try the laptop out at Acer’s press conference. This is mainly because Intel hasn’t actually announced the 9th-gen range yet.

With no need to be thin, there are plenty of ports on offer here and this laptop has no less than five speakers and a subwoofer. We couldn’t test them out properly but it seems like a similar setup to the 21X, which sounded amazing.

With it’s high price tag and bonkers design, the Helios 700 isn’t for everyone but it’s an interesting addition to the Predator range.

For anyone lured by the 21X but not the bank balance to match, this is a more affordable desktop replacement with some top-notch specs. The moving keyboard isn’t just for the sake of it either, with a more comfortable experience and how it works with the cooling system.

We’re also intrigued to see how the MegForce keys work in real life.