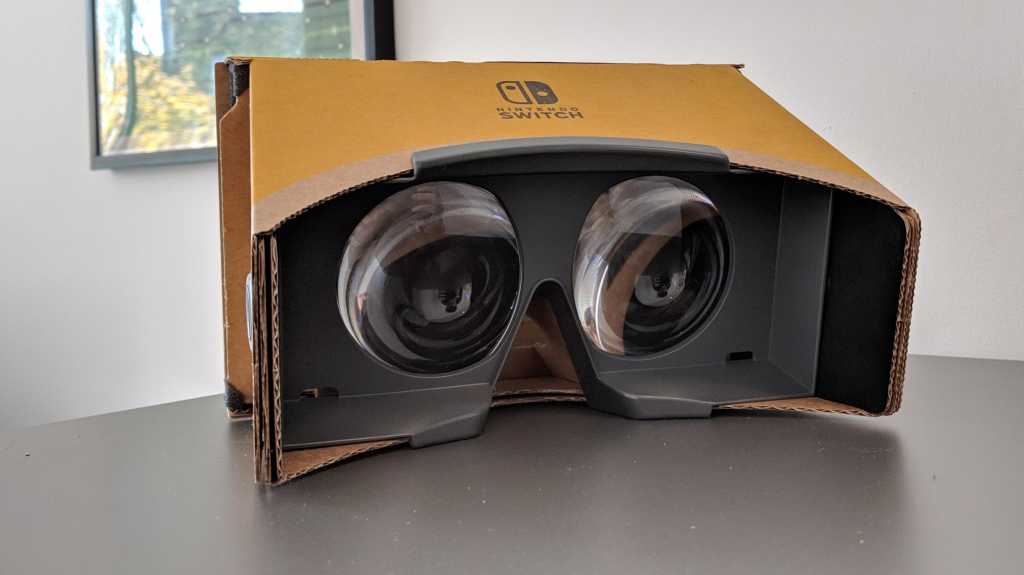 This is the best Labo kit yet in just about every respect. The designs are more creative, the tech is more impressive, and there’s a breadth and depth of gameplay that none of the previous Labo sets can match.

From a certain viewpoint (geddit?) Nintendo’s fourth full cardboard kit – the Nintendo Labo VR – is its most ambitious yet, trying to turn the plucky console that could into a fully fledged virtual reality headset.

I suspect that when Labo VR was first announced I wasn’t the only person skeptical that Nintendo could pull it off – not least after the underwhelming Labo Vehicles Kit – but clearly I should have kept the faith: this is the best Labo kit yet.

It’s also the most complicated to buy. For the first time Nintendo has split its new Labo kit into a variety of different bundles, all available from 12 April. For £69.99/$79.99 you can buy the full Labo VR kit, which includes the game itself, goggles, and five major Toy-Cons to build.

If that’s a bit steep, then £34.99/$39.99 gets you a VR starter set: the game, the goggles, and one Toy-Con: the blaster. If you opt for that then two expansion sets – £16.99/$19.99 – offer you an additional two Toy-Cons each. Reassuringly, buying the full set this way works out to almost exactly the same price as getting it all in one go, so Nintendo isn’t penalising those who can’t afford the whole kit all at once.

You’ll need to buy at least the starter set if you want to get the goggles and use them for the new VR modes being added to Breath of the Wild and Super Mario Odyssey – they arrive on 26 April as free updates to owners of the games, so I haven’t had the chance to test them yet.

Labo VR itself is a clear winner though, with the greatest depth and breadth of content of any Labo kit so far, all emphasising the sort of experimental playfulness that’s the hallmark of Nintendo at its best.

Take the wind pedal, for example. This simple Toy-Con is a variant on the accelerator pedal in the Vehicles Kit. This time, it’s repurposed for a simple game in which you play as a jumping frog. Except, of course, for the Nintendo twist: the pedal doubles as a giant cardboard fan, angled such that every time you push the pedal to jump you immediately feel a rush of wind in your face.

It’s a tiny touch that adds nothing at all mechanically, but speaks volumes to Nintendo’s playful approach to VR. You don’t need a 4K display or hyper-accurate motion-tracking to shift players’ perceptions: a cardboard pedal can be all it takes to make you believe – just for a split-second – that you’re a cartoon frog jumping over the floating balls thrown at you by a giant mechanical bear.

That same touch of verisimilitude elevates the camera too: a few bits of clickety-clackety cardboard magically turning the rotatable front piece into the zoom lens it’s meant to be.

Elsewhere realism is less of a concern: the elephant mask has a bendable, poseable trunk that you can use to reach out into the game world for a mini-game in which you must re-position platforms to help a falling ball reach its goal. You don’t play as an elephant, and there are no elephants around: but the bendable cardboard arm is faintly elephantine, and so here I am: a grown man playing with a cardboard elephant mask and desperately hoping my flatmate doesn’t come home while I do.

Of course, I’ve built all of this stuff myself, out of cardboard, rubber bands, and the odd IR sticker or two. The builds are as entertaining as ever – simple to follow, charmingly written, and fun to construct – though the elephant is perhaps the first Toy-Con to feel properly fragile once it’s finished, and I worry how long that trunk will stay in one piece, especially in the hands of over-eager kids.

The VR conceit means it can’t all be cardboard at least – at the heart of everything are the goggles. They’re plastic and come pre-built, but your first job is to construct the cardboard frame that holds the Switch itself in place in front of them, and to which most of the other toys attach.

One downside is that Nintendo has chosen not to include a strap, so instead you’re left to hold the headset up to your face while playing – presumably Nintendo trying to cover itself against improperly assembled straps leading to broken headsets.

It’s the only awkward element, but at least the games have all been designed around that constraint (though that doesn’t help much for its accessibility). And otherwise, this is a smoother experience than just about any VR rival except, well, Google Cardboard. With no wires, trackers, or cameras you can play Labo VR anywhere you have room to sit, and there’s no irritating set-up. Factor in the price, and this is a welcome step forward for mainstream VR.

Impressively, Nintendo has even built a selection of mini-games that use the headset alone, without any other Toy-Cons. They rely on you to either tap the side of the headset or clutch a Joy-Con in your hand for more complex inputs, while you do things like aim at targets, swing a baseball bat, or drive a car.

To call these games thin would be over-selling it, but that’s the point: these micro-games hark back to the likes of WarioWare, each serving as a tiny proof of concept, experimental ideas to flick between, marvel at, and move on. They don’t all work, but if you hit a dud it’s over in 30 seconds anyway, and you move onto the next – or head on to your next build.

Some of the micro-games feature the Toy-Cons too, exploring different ways the designs can be used beyond their main games. Factor in the mini Toy-Con too – like a scuba mask or a clip-on pinwheel that you blow on – and you’re left with 50+ micro-games, five deeper mini-games, multiple projects to build, and the same educational and coding content offered by the other Labo kits.

This is the best Labo kit yet in just about every respect. The designs are more creative, the tech is more impressive, and there’s a breadth and depth of gameplay that none of the previous Labo sets can match.

The games remain fundamentally simplistic – and they’re definitely not all winners – but there’s enough here to win over skeptics, and a sense of creativity and playfulness that runs through the game from start to finish.