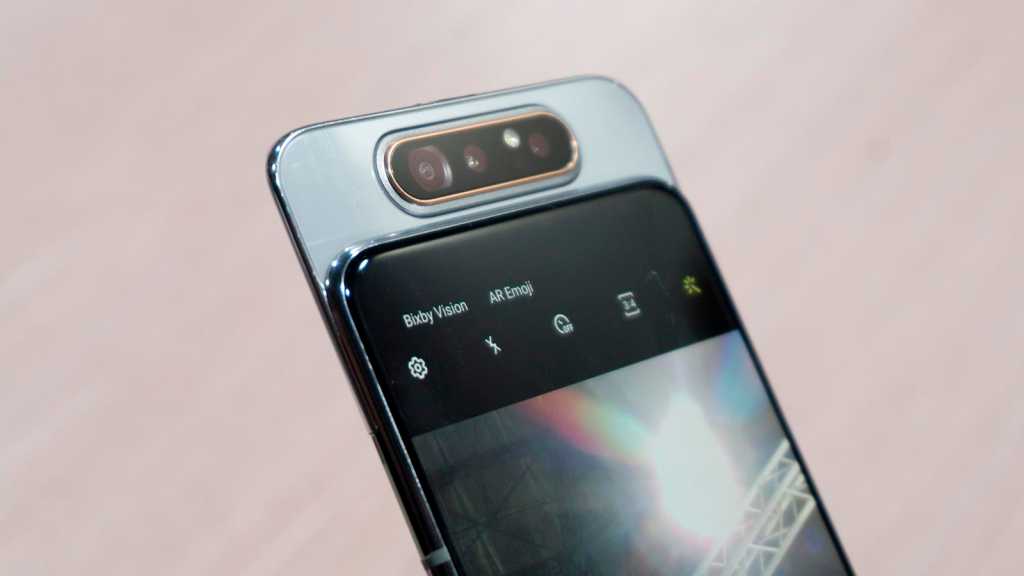 Without pricing we can’t fully decide if the Galaxy A80 will be a hit, but Samsung has at least broken some of its own design moulds to make it.  The rotating cameras are wacky but promising and the build quality is excellent. We will have a full review in time.

While eyes have been on Samsung’s Galaxy S10 series recently, the company has announced the still-premium Galaxy A80 phone that it says appeals to a different audience.

Aimed at a younger user with a penchant for video recording and streaming, the A80 has a unique rotating triple camera system that helps it stand out in a year of phones with pop-up cameras.

We went hands-on with the A80 at the launch event in Milan. Here are our first impressions on whether it makes a great mid-range phone.

The Galaxy A80 will be available from 29 May but at the time of writing Samsung had not confirmed any prices or sale regions. Given its launch in Milan, Bangkok and Sao Paulo it may be geared more towards European, Asian and South American markets as a mid-range alternative to the S10 phones.

The headline feature (gimmick?) of the Galaxy A80 is its rotating pop-up cameras. When closed the device has an expansive 6.7in AMOLED display and three cameras on the back.

When you switch to the front-facing camera, a section pops out like we saw on the Oppo Find X. But instead of having a front facing camera the same three cameras rotate horizontally on a spindle to face you.

It’s a clever piece of engineering but is no doubt fragile and we wouldn’t trust the integrity of the components after a sharp drop – and the same goes for the pretty glass back. At least this is a premium build quality at a lower price (price TBC!).

Those cameras are a 48Mp main, 8Mp ultra-wide and a 3D depth sensor. Shots we briefly took look crisp and clear but we’ll have to wait for a full review to see if it’s as good as the Galaxy S10 or the 48Mp shooter on the Honor View 20.

The 3D depth sensor allows Live Focus (Samsung’s phrase for bokeh) video recording. Samsung said it built the phone for ‘digital natives’ who stream video more than the older among us – we are talking Instagram Stories, TikTok and the like and it hopes new features like this will win over customers.

It eschews a 2x zoom lens in favour of this 3D sensor and could make for a pretty formidable mid-range set up.

The A80 is a large phone to hold. It’s bigger in every dimension than the Galaxy S10 Plus and is noticeably thick at 9.3mm – likely needed to hold the moving pop-up mechanism.

We like it – it’s more premium than you might expect and the display is absolutely stunning for an A series phone.

But big size also brings big specs. A huge 8GB RAM and 128GB storage is more than welcome and is powered by a Snapdragon 730 chip inside. The absence of a micro-SD card slot is unusual for a Samsung phone.

Unlike the Galaxy S10 series, the A80 oddly does not have a headphone jack and is the first major Samsung handset to omit one. It’s odd that the high-end S line would retain it and the A80 shed it, but there you go. Maybe Samsung thinks young people don’t want headphone jacks.

The A80 has an on-screen fingerprint sensor like on the S10. Annoyingly Samsung would not confirm whether this is the same ultrasonic tech seen in the S10 – it could be a less advanced one, which is likely to keep the price down.

The A80 also benefits from Android 9 Pie running Samsung’s attractive One UI interface. The A80 looks and feels every bit as slick and responsive as the S10 out the box, and although the display is capped at 1080p it looks very good and most people won’t necessarily need the extra resolution.

25W fast charging is built in and powers the generous 3,700mAh battery. We are hoping the A80 fares better than the S10 models did in our testing when it comes to battery life, particularly given Samsung touts the A series’ excellent longevity as a selling point.

These things you get, but you don’t get wireless charging or waterproofing.

Once we know pricing it’ll be easier to judge whether the Galaxy A80 is worth a look. If it comes in around £500 then it’ll be a great deal compared to the Galaxy S10, but it will also cost the same as the OnePlus 6T or Honor View 20.

Those phones have more power but if you want a unique camera set-up, no notch and a very good AMOLED screen, the Galaxy A80 could be a contender in the higher mid-range. We’ll have a full review soon.