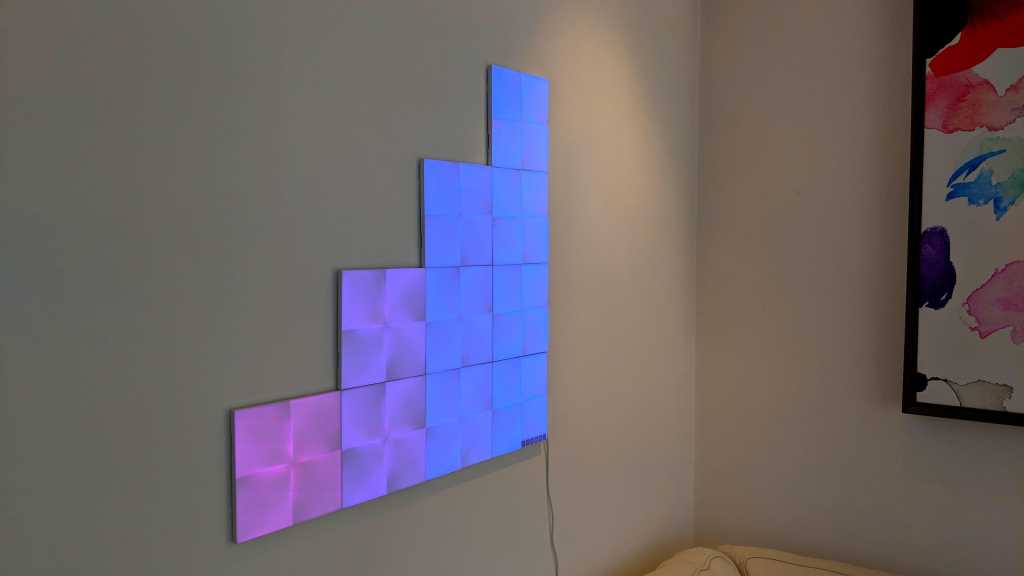 The Nanoleaf Canvas is a brilliant piece of interactive wall art that doubles as mood lighting. The rhythm support is fun but flawed, and the whole thing is expensive, especially if you have ambitions to build a sprawling design with tens of panels. But with great smart support and an easy app, this is a great piece of kit.

When most people think of smart lights they think of replacing their existing bulbs with new ones that can connect to Wi-Fi or change colour. But the Nanoleaf Canvas is something else entirely: an expandable set of touch-sensitive smart LED panels that can be wall-mounted in almost any configuration you like.

Oh, and they’ll flash and change colour in time to music too.

All of that doesn’t come cheap sadly, which is probably the main downside to the Canvas: at full price the main set will set you back £179.99/$249.99. 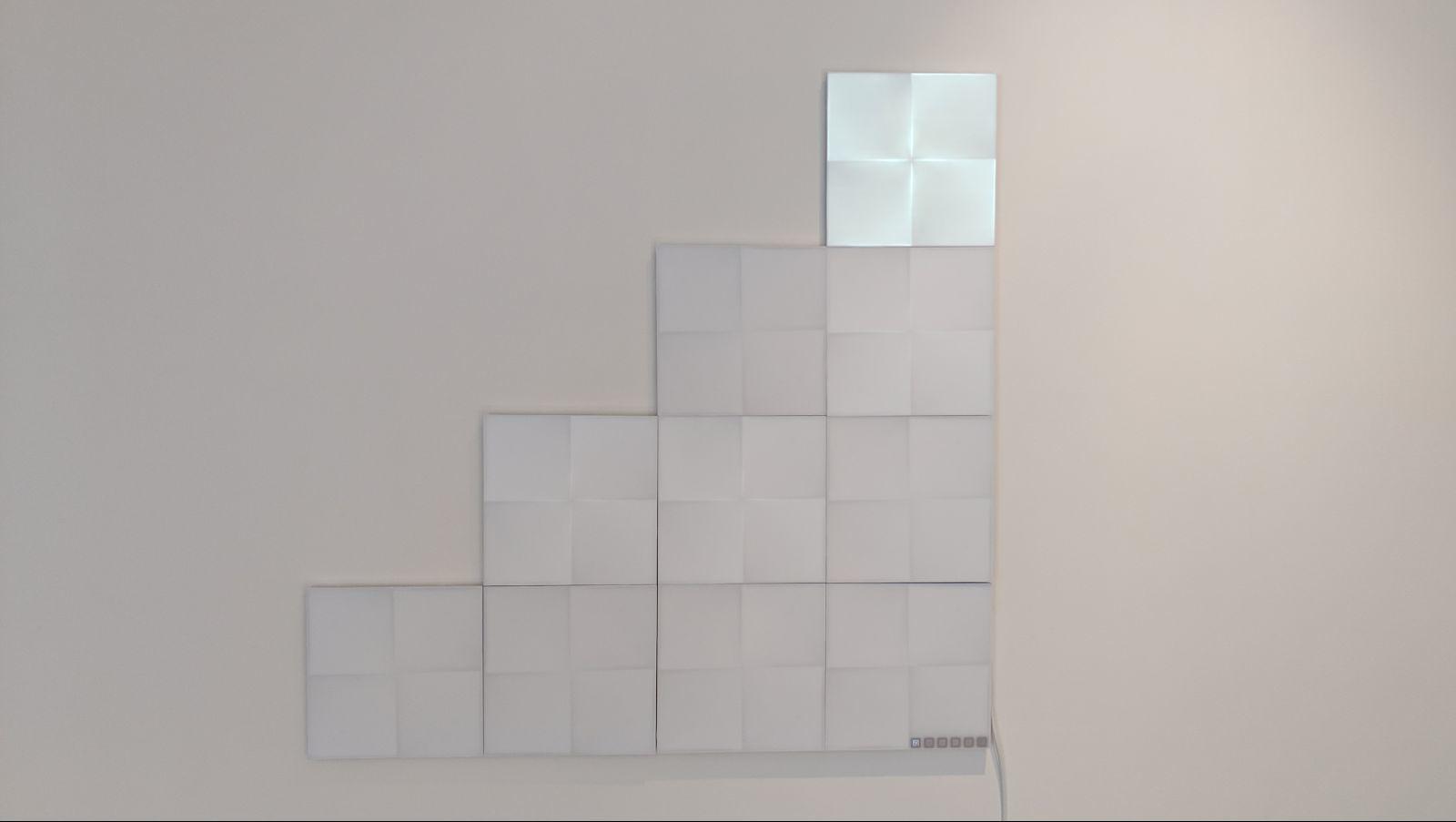 Most people will be content with the base set of nine, but it does mean that if you have visions of any grand installations spanning across a whole wall, you’ll have to cough up quite a lot of cash to bring it to life.

Still, it’s about the same price as its closest rival, the LIFX Tile, which only includes five tiles in its base kit, so in that sense the Nanoleaf Canvas looks to offer better value for money.

If you’re not a fan of the square shape, Nanoleaf also offers triangular panels – a kit initially called Aurora, but now just branded as the Nanoleaf Light Panels.

You can now buy other shapes, so read our Nanoleaf Shapes Hexagons review.

It’s hip to be square

So the main kit is a set of nine discrete square LED panels, one of which is a control square – which includes a few touch controls and the Wi-Fi hardware. 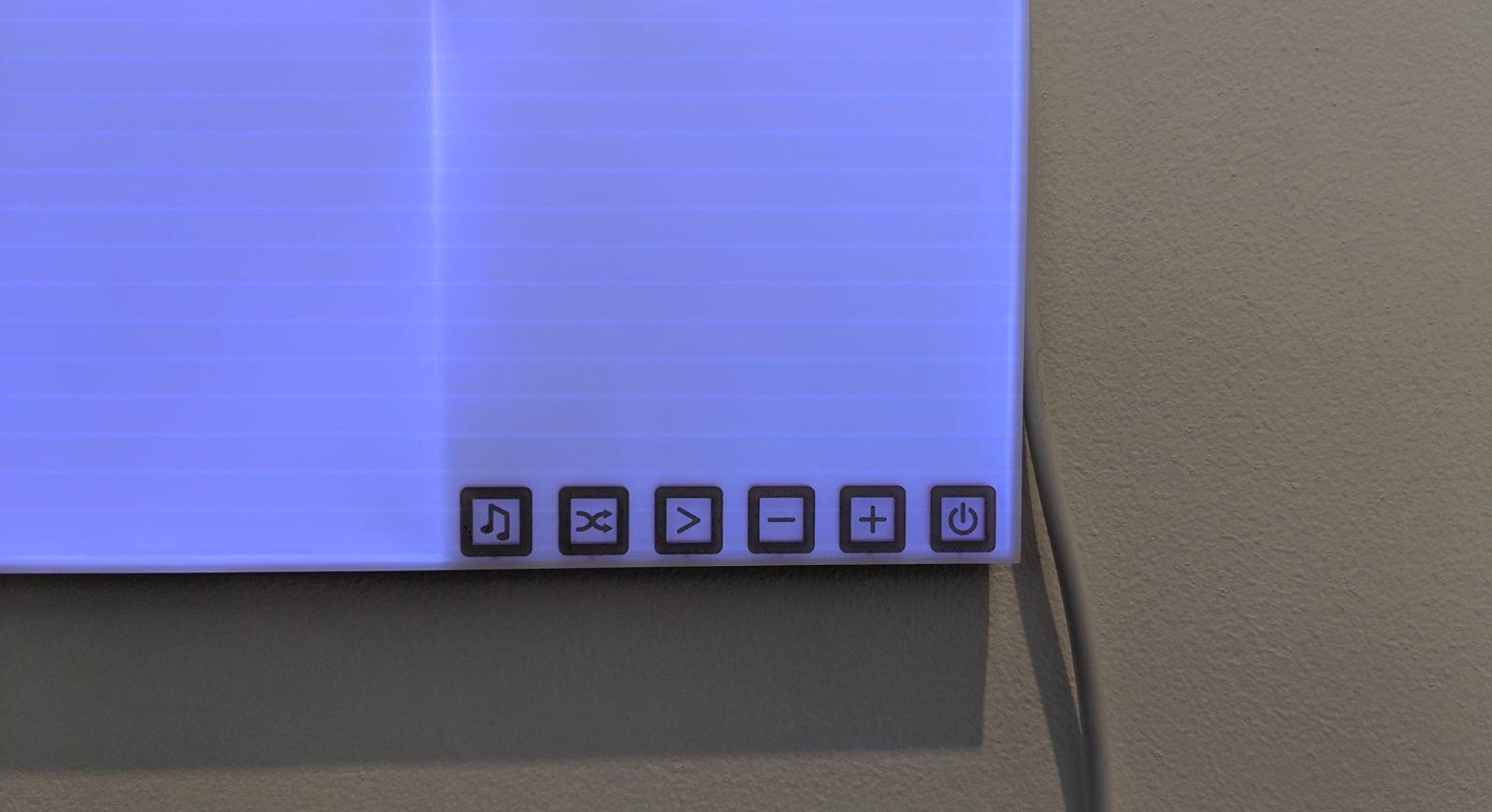 The other panels can be arranged in almost any configuration you want, with small connector chips in the back that you can arrange to connect each square together – though they do have to touch, you can’t have gaps between tiles. Smartly, Nanoleaf has arranged the connector slots so that you can have tiles line up exactly or off-centre, which massively expands the number of possible designs.

Even better, the accompanying app includes a design mode, which lets you plug in the number of squares you have and mock up layouts to help pick something that you like before you commit. It’ll even alert you if you’ve picked a design that won’t work with the connector layout, to save you from the grief of realising that too late.

When it comes to actually mounting the panels, the kit includes double-sided sticky tape (basically custom 3M command strips) that’s strong enough to support the panels on the wall without any need for drilling or screwing. It means mounting the whole set takes just a matter of minutes once you’ve picked your design and – in theory – won’t damage your walls.

Realistically, you should probably still plan around some mild paint chipping whenever you remove the panels though, and it’s enough work that you won’t want to change your design often after setting it up the first time. Removing a previous Aurora kit pulled off a few patches of paint despite our best attempts to be careful, though it’s still much less intrusive than drilling in screws or hammering in nails to mount something. 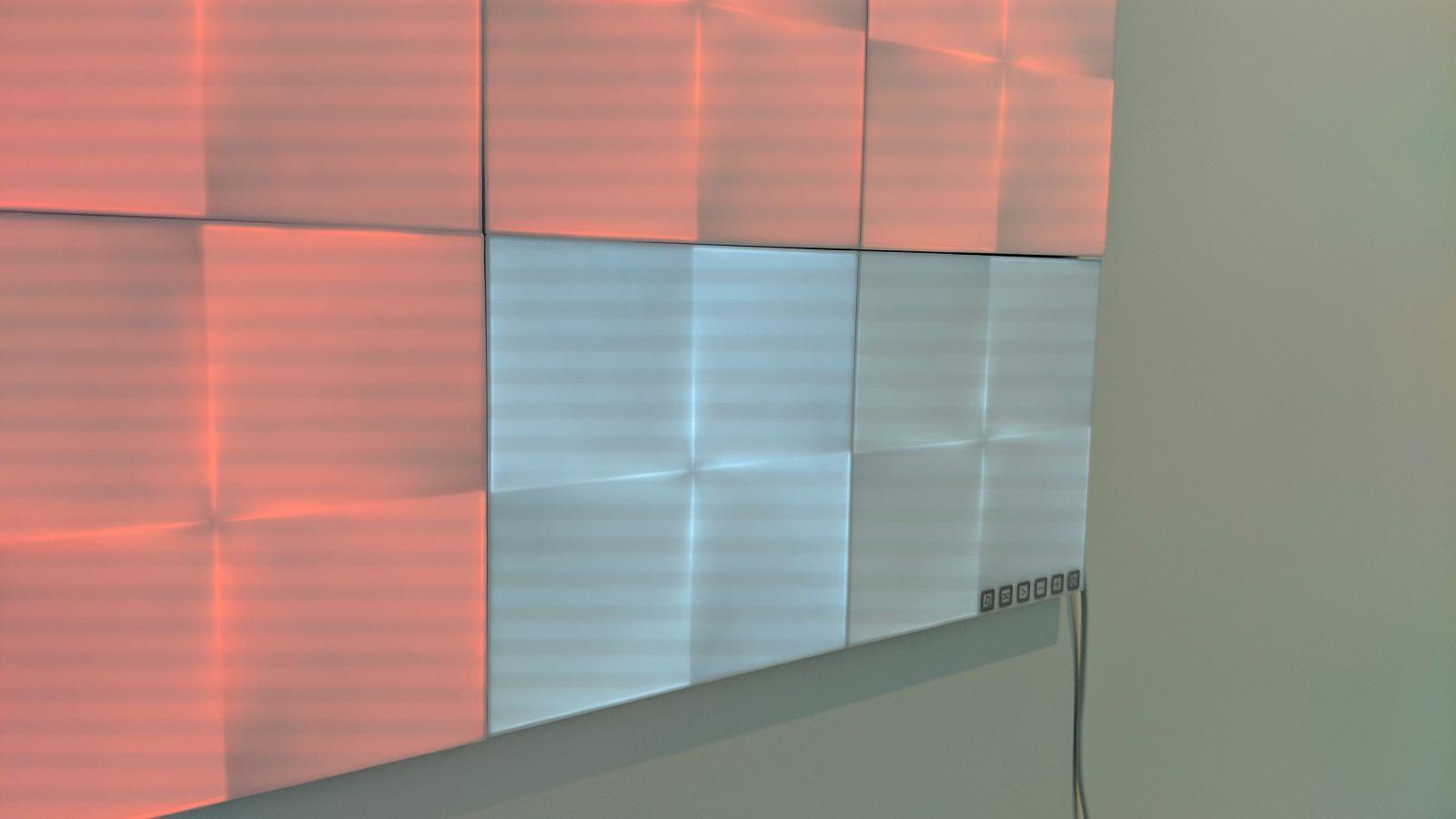 The Canvas requires mains power of course, so there’ll still be a power cable to factor into your designs – though the white lead is fairly slim and unobtrusive, all things considered.

So, once you’ve got it onto the wall, what exactly can your Canvas do?

Each square can be independently coloured, allowing you to set up static patterns, cycling designs, random colour changes, or sequences that shift in time with music.

The Canvas comes with a selection of themes pre-installed which you can cycle or shuffle through, but the app also allows you to create and save your own custom designs. Users can also share designs online, meaning you have access to thousands of different designs to suit just about every mode the Canvas offers.

The support for music is the same offered by the Rhythm add-on to the older Aurora set, and it works… sort of. I had my Canvas set up about 3 metres from my speaker, and at a comfortable listening volume it definitely reacted to the music, but there was little sense of a clear pattern to the responses, and a noticeable lag.

Turning up the volume helped – though that meant having the speaker too loud – and playing an audio source much closer to the Canvas improved things dramatically. Basically, if you can mount your Canvas directly above your speaker this is a really fun effect. If you can’t, you’ll probably play around with it once and then turn it off. 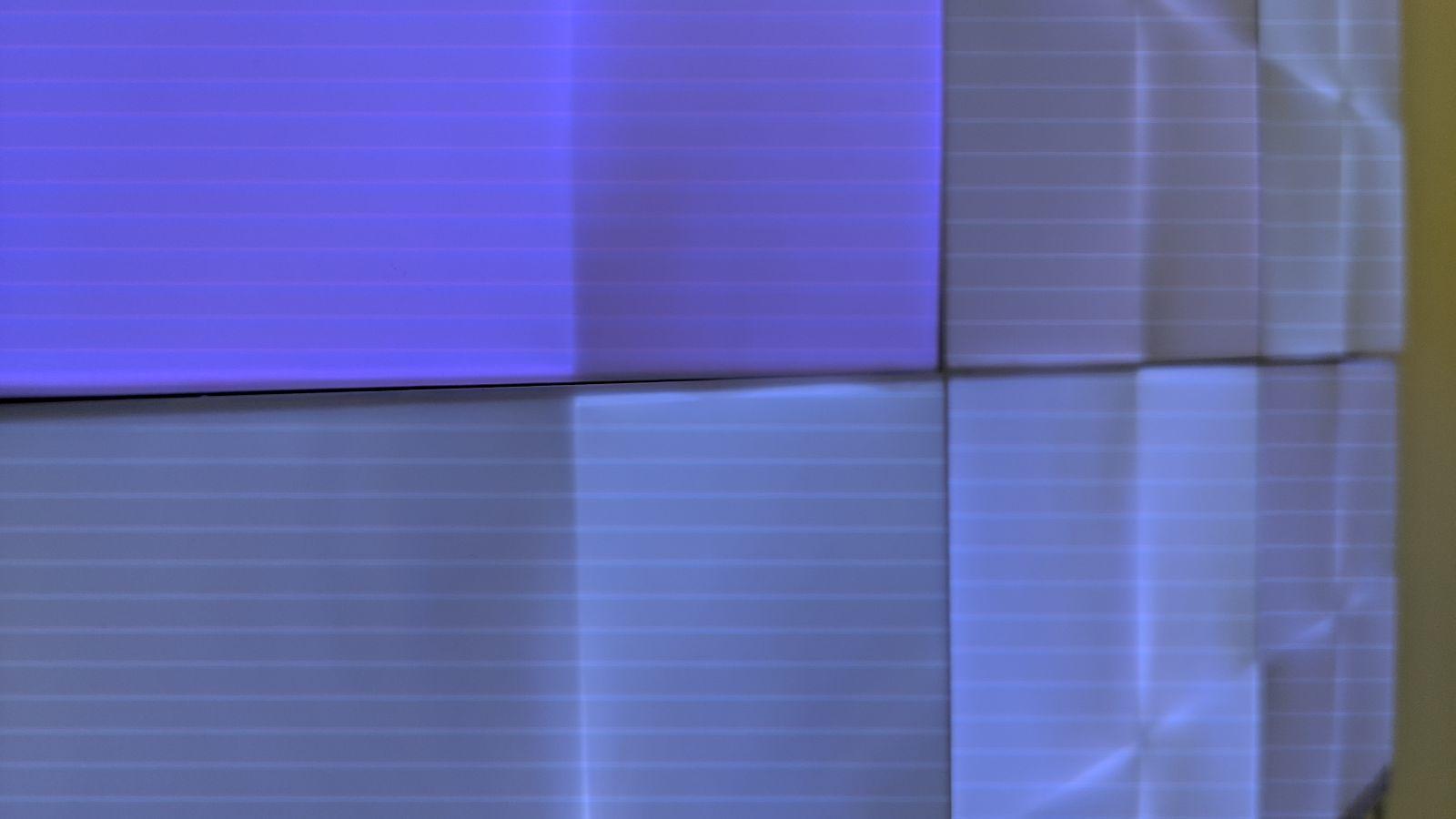 That’s not the only slightly gimmicky feature. Each panel is touch-sensitive, which you can use to play simple games by tapping on the squares. It’ll only work if you’ve mounted the panels low enough to easily reach of course, and realistically you’ll get bored of it quickly, but it’s a fun little feature that may add some extra appeal to families with young kids.

There are a few simple touch buttons on the Control Square to let you change settings, but you’re more likely to use the app, which lets you remotely turn the panels on, tweak brightness and speeds of the various modes, and set schedules – if you have the Canvas in your bedroom, you might want to use it as a light alarm for example, scheduling it to turn on every morning and slowly build in brightness.

There’s also compatibility with the full range of other smart services: Google Assistant, Amazon Alexa, and Apple HomeKit, along with IFTTT support so that you can set up more complex interactions involving your other apps and services.

All of this works incredibly well, and even set up and pairing has improved remarkable since the early days of the Aurora. The main frustration with the Canvas is actually nothing to do with the smart stuff, but instead comes down to its core design. 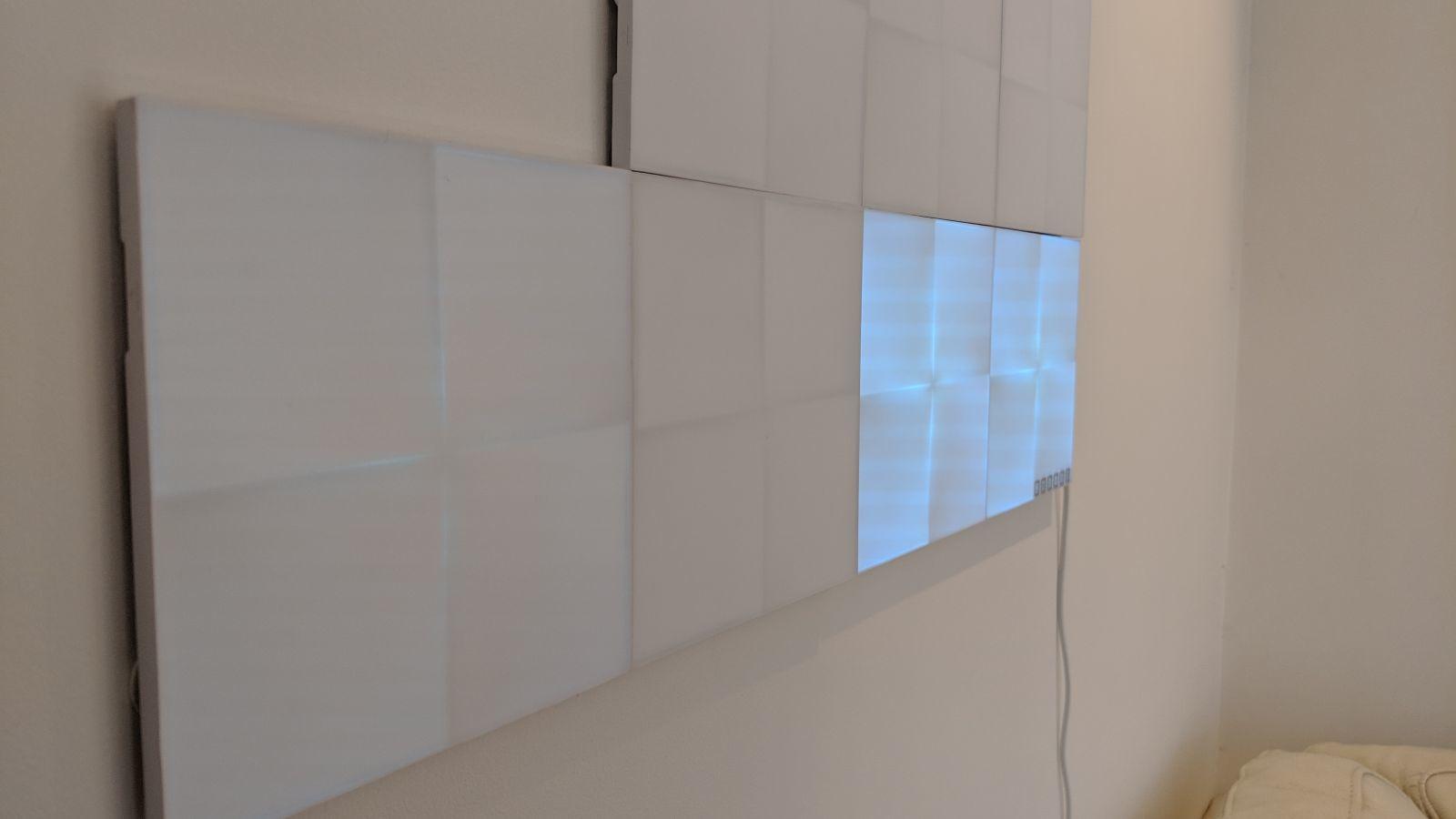 Each panel is split into four smaller squares, and there are rather noticeable lines between them each, leaving a visible grid, and slightly spoiling the effect. It’s a disappointment compared to the Aurora, where each triangular panel is unbroken, though both suffer the same problem of having slightly uneven lighting, with noticeable bright and dim spots.

It’s also worth noting that the Canvas has fewer LEDs than the LIFX Tile, which means that it can’t achieve the complex patterns, simple writing, or flowing colours that the LIFX rival can. That said, Nanoleaf still has LIFX beat in terms of the number of tiles that can be connected together, and the app support and connectivity is more reliable.

The Nanoleaf Canvas does exactly what you want it to, and does it well. Connecting and mounting the tiles is quick and easy, Wi-Fi signal is solid, and the app and smart assistant support are both easy to integrate.

The rhythm support is fun but flawed, and is very dependent on how close to your speakers you can get the panels. The system is also expensive, especially if you have ambitions to build a sprawling design with tens of panels. Finally, the ‘cross’ effect produced by the LEDs in the centre of the panels is a bit jarring, and detracts slightly from the overall visual.

Still, it’s great fun playing around with designs for different occasions or moods, and once you’ve set it up how you like it’s a brilliant piece of interactive wall art that doubles as mood lighting.