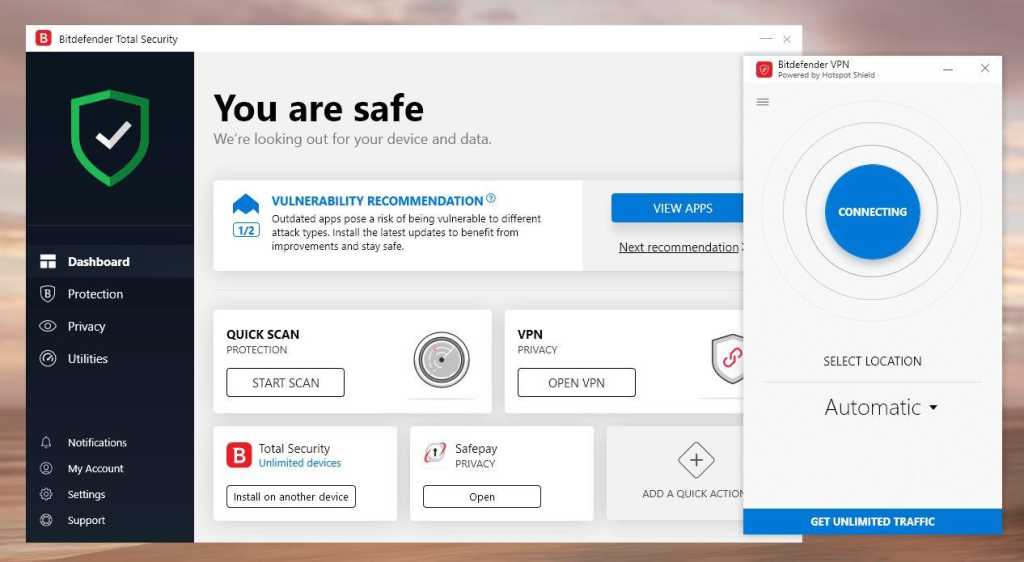 The free offering may suit casual users, but if you’re thinking of paying for the premium version, there are better choices which cost less and do more.

It’s very limited – in line with what you’d get from a standalone free VPN – but it may be enough if you simply want protection on public Wi-Fi or for anonymity when visiting a particular website.

What do you get for free?

If you already have Bitdefender Total Security already installed, it’s a simple case of clicking the ‘Install VPN’ button in the dashboard. Once that’s done, the button changes to Open VPN which brings up a new window with a connect button.

Pressing it connects you to a server automatically, and there’s no choice of location. There’s also a running total of the amount of data used while connected: there’s a daily 200MB limit.

If that sounds a lot, it isn’t. We visited two websites to test for IP address and DNS leaks, then went to speedtest.net to see what sort of performance was on offer. A couple of minutes later, over half of that allocation was gone.

It turned out that we’d been connected to a server in Manchester, and it successfully masked our real location and IP address in London. Speeds were very good, only fractionally less than our usual broadband download and upload speeds.

If you click the arrow next to ‘Automatic’ you’ll see a list of countries, but attempting to select one will merely prompt you to upgrade to Bitdefender Premium VPN.

Since you can’t pick a country, this free version is useless for unblocking content in other regions, and 200MB isn’t enough to stream video.

Settings are sparse: you can choose to enable the VPN when Windows starts, and you can disable notifications. The only useful option is the one to start the VPN automatically when your device connects to an unsafe Wi-Fi network. It’s only greyed out here because our test PC didn’t have Wi-Fi.

Unless you just want a tiny allocation of data to use while connected to public Wi-Fi, or you want protection and privacy for a very short time of browsing the web, you’re going to find the free offering far too restrictive.

Upgrading to Premium VPN costs £2.55 / $3.33 per month which isn’t bad at all. You’re billed for a year’s subscription up front, and this may outlast your antivirus subscription. But although the VPN must still be accessed via Bitdefender’s antivirus dashboard it will continue to work once your AV subscription has lapsed.

Premium allows you to select a country from the 30-odd in the list, and this includes the US and UK. It doesn’t give you any more detail than that: you can’t pick a specific server, or see which server is the fastest or has the least number of users already connected.

You’ll notice the wording ‘Powered by Hotspot Shield’ at the top of the window, or at the bottom if you’re using it via the Mobile Security app on Android or iOS (again, there’s no separate app: it’s still an add-on to the antivirus app). That’s because Bitdefender doesn’t own its own VPN servers: you’re simply using Hotspot Shield’s service through Bitdefender’s app.

Amazingly, Premium VPN works out cheaper than you can buy the standalone VPN service from Hotspot Shield. There is a catch, though: no extra settings appear when you upgrade to Bitdefender Premium, You can select to automatically connect to a VPN server when you’re on an unsafe Wi-Fi network, but that’s it.

With Hotspot Shield, you have the extra security of a kill switch and a few other settings for when to launch a VPN connection.

One of the biggest concerns with any VPN service is the privacy policy which determines exactly how much – if any – information it logs about you and your use of the service. Bitdefender collects only enough information to provide the service such as device IDs and hashed IP addresses.

AnchorFree, which runs Hotspot Shield, is then responsible for processing your data and you can read our full review of Hotspot Shield to find out the full details. But aside from some aggregated, anonymous data which it logs to improve the service, the main issue is that it’s based in the US which is one of the “14-Eyes” countries. In an ideal world, you’d use a VPN service based outside the 14- Eyes so there’s no chance of it sharing any data with any other country or the local authorities.

As Bitdefender uses Hotspot Shield, it’s no surprise that we found speeds were in line with what we saw when we tested Hotspot Shield. Bitdefender customers aren’t second-class citizens: you get the same level of performance.

We saw decent speeds – not the fastest but perfectly good – when trying a variety of countries including the US, UK and Japan.

There was a big problem, though. We couldn’t watch Netflix or BBC iPlayer when connected to the VPN. This means that Bitdefender Premium VPN is no good if you want to unblock Netflix in other countries, or watch home TV when you’re abroad.

If you already have Bitdefender Total Security, you might benefit from the free VPN service when using public Wi-Fi. It’s simple to use and no hassle.

The big question is whether it’s worth paying for the Premium version. Put simply, if you just want a VPN for online privacy and anonymity, it’s perfectly fine and reasonably priced. But if you’re more demanding, want to unblock streaming services and have a greater level of security and more settings, you’d be better off with NordVPN, PureVPN or  ExpressVPN.