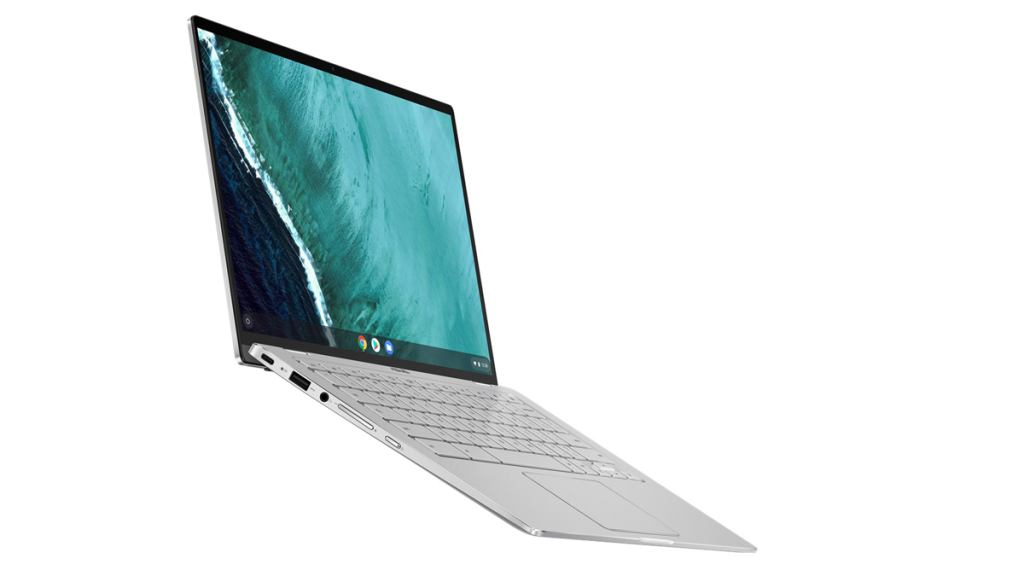 The Flip C434TA has some of the best performance we’ve seen in a Chromebook. It looks good, is comfortable to use, and the touchscreen adds versatility especially when paired with Android games. At £600 though, we’re not happy with the loose hinge and keyboard aesthetics, both of which cheapen the experience. It’s a powerful device, but in all honesty we still prefer the C302CA that it seeks to replace.

Asus is a company that has regularly found itself at the top of our Best Chromebook chart. We were very impressed with the premium build and performance of the C302CA Flip that we reviewed at the end of 2017, but the Taiwanese manufacturer has not rested on its laurels, as the arrival of a new model proves. The question is, can the Asus Chromebook Flip C434TA improve upon its impressive stablemate?

The Flip C434TA is available to buy in the UK from 13 April and costs £599 from Amazon . The same release date should be true for US customers, but at the time of writing no price was confirmed. Expect to pay around $600 if the current trend for dollar to pound conversions in tech is borne out.

If you’re looking to spend less money, then the excellent predecessor is still available. You can buy the Core M3-6Y30 variant of the Flip C302CA from Amazon for £475, while John Lewis has it for £499.

As the price would suggest, this isn’t your run-of-the-mill plastic Chromebook. Like the C302CA, this model features an all-aluminium case this time with a tapered base rather than the industrial straight lines of its predecessor.

There’s some nice attentions to detail, such as the diamond-cut edges that adorn the lower section, and what looks like polished chrome hinges and trackpad surround. The plain, matt finish of the lid is complemented by the tasteful choice of making the Chrome legend and logo a subtle dark grey, leaving behind the multi-colours decals of old and lending the device a refined air.

This visage falters a little with the keyboard. In use, it’s a comfortable typing surface, as we often find with Chromebooks, but the textured silver keys themselves just look a bit cheap. They are backlit though, which is a useful feature. There’s a similar slip in the trackpad. Once again, in operation it’s reliable and accurate, so no complaints there, but the hollow sound and minor movements it makes when tapped in the lower areas just feels like it belongs on a device with a lower price point.

As we’ve grown accustomed to with recent models, the C434TA hinges can move through 360 degrees, allowing the device to be placed into a tent mode or even wrapped around to make an impromptu, if somewhat unwieldy, tablet.

While this can be useful – we enjoyed playing Alto’s Odyssey on the large touchscreen – it still feels something of a gimmick, albeit not one restricted to this device. A more particular gripe is that the hinges felt a little loose, with positions past 130 degrees usually resulting in the slow but inevitable slip of the panel down to a flat position.

This isn’t a huge deal though, as it’s unusual to use a laptop in that orientation. But, taking the device off of our lap quickly, say to move from one desk to another, did result several times with the display ending up at the 180-degree angle position. Our main concern is that over time this looseness could increase through wear, making it a more significant issue.

The actual display itself, which can often be the weakness of Chromebooks, is a good one. It’s a 14in LPS panel with a full HD resolution of 1920×1080. Judging by the colours, contrast and viewing angles we’d say it uses IPS tech, but the spec sheet doesn’t contain this information and Asus hadn’t responded to our questions by the time we posted this review.

We measured maximum brightness at around 300 lumens, which makes it strong enough to cope with strong sunlight, although the glossy covering is quite reflective, so using it indoors is preferable. Thin bezels on the top and sides mean Asus has achieved a screen-to-body ratio of 87 percent, which keeps the overall size of the C434TA down to a svelte 202 x 321 x 15.7mm.

Port selection is respectable, with two USB-C, one USB 3.1, a microSD card slot, and headphone jack giving users plenty of options. Stereo speakers are found on the underside of the chassis and deliver surprisingly voluminous and impressive tones, which is not often the case in slimline laptops. Volume controls and a power button on the left flank complete the set.

This model comes with a 1.1GHz dual-core Intel Core M3-8100Y processor, which belongs to the Amber Lake series of Intel chips. The Y denotes that this is an ultra-low power processor, which should benefit battery life, but can also have a trade off in terms of performance.

Asus does list two other variants of the Flip C434TA, one with a 1.3GHz Intel Core i5-8200Y, and another sporting a faster 1.5GHz Intel Core i7-8500Y, but at the time of writing the prices and availability of those models was yet to be confirmed.

4GB of RAM is the order of the day, with a generous 128GB of storage available for downloads, files, and apps.

Chromebooks aren’t really intended to do any heavy lifting when it comes to software. So video and audio editing are pretty much out, even if there are some online apps that purport to make this a reality. This is good, because the hardware would struggle with those computationally demanding tasks. For everyday stuff though, which is the principle realm for this style of device, the C434TA acquits itself very well.

Running multiple open tabs, including graphics-heavy sites, while streaming video or music is a breeze, with no noticeable slowdown or stuttering. Gaming was also good, with PUBG Mobile running smoothly on medium settings, while the aforementioned Alto’s Odyssey being a great experience thanks to the large screen size and rich sounds.

Putting the Flip C434TA through the normal suite of benchmarks returned a score of 73.4 on Jetstream 2, and 455.29 on Benchmark 3.0, both of which are scores that put it top of the pile in terms of Chromebooks. Battery is another plus, with our model surviving for 10.5 hours in our video streaming test.

ChromeOS has continued to add refinements over the years, reaching the point now where a Chromebook is a realistic option when considering a laptop for everyday computing. Browsing the internet, playing online games, working (so long as you’re happiest using Google’s suite of excellent office apps), streaming video, music, and general productivity are all effortless, with many programs now offering offline functionality.

The real progress is in the ability to run Android apps on Chromebooks, with PUBG being a fine example. Where the ChromeOS Web Store has lots of programs that are essentially Chrome browser extensions, the Google Play Store is awash with far more developed apps that can now be used on these laptops.

It’s true that many haven’t been optimised for the increased display sizes offered by Chromebooks, with formatting tending to waste large parts of the screen, but they all work well and expand the capabilities of the machines. One advantage is for services such as Amazon Prime Video and Netflix, which don’t have the option to download shows on the browser version but do in the Android apps.

Asus has delivered another powerful laptop that shows off the real capabilities offered by Chromebooks. Games and general tasks worked flawlessly, while the multi-angle touchscreen adds versatility in how you can use the Flip C434TA.

But at £599 it doesn’t quite live up to the C302CA that it seeks to replace. Whereas that device was an almost perfect mixture of hardware and software, the C434TA lacks the magic, with the slipping hinge posing a question mark over build quality.

It’s a great Chromebook in terms of performance and aesthetics, but can’t fully justify that large asking price.