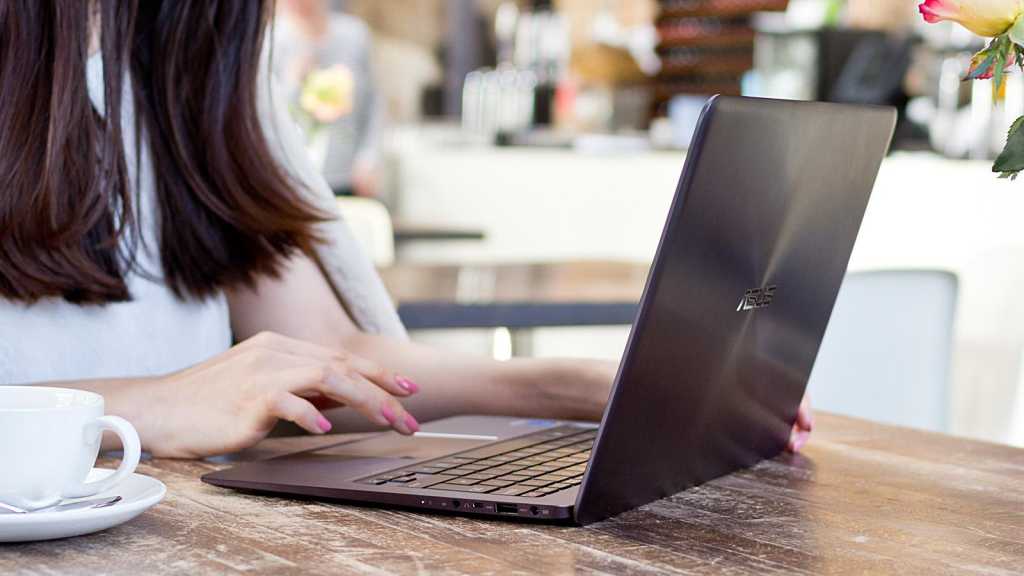 Bitdefender has consistently been at the top of our best antivirus chart, but the affordability and plentiful feature set from Norton 360 Deluxe just about edge it into second place. As the name implies, if you want Total Security go with Bitdefender, but Norton should provide everything most people are looking for.  However, we gave both services a full five star review and you really can’t go wrong with either.

Keeping yourself safe online is incredibly important and a quality antivirus is central to achieving that. Norton and Bitdefender are two of the biggest names in the business thanks to producing a high-quality product at a reasonable price for many years. We compare both programs to see which is the easiest to use while protecting you from any unwanted attention.

Our full reviews of both Norton 360 Deluxe and Bitdefender Total Security 2020 go into much greater detail on each individual product.

Both Bitdefender and Norton offer a range of payment options depending on how much protection you would like. You can often find excellent discounts for the software on their home websites with up to 50% off the price, so do have a look around before you make your purchase. The prices below are for an annual subscription.

We’ve also got an article dedicated to the best antivirus deals.

Bitdefender’s free version offers limited malware protection and doesn’t include any of the advanced features, as you may expect.

The first paid for version is Bitdefender Antivirus Plus 2020 and includes excellent malware protection, a password manager, a file shredder, WiFi security advisor and a hardened browser to make your online movements that much more secure.

The next level up is Bitdefender Internet Security 2020 which includes all of the features of the Antivirus Plus version above but also includes a two-way Firewall, webcam protection and a file encryption utility to keep your files safe in case of a ransomware attack.

Finally, we have Bitdefender’s Total Security 2020. Once again this includes the features of the previous version, while also adding an anti-theft module, performance optimization tools and the ability to protect up to 5 devices with one licence.

Total Security can also be used on both Windows and Mac operating systems, too.

There is sadly no free offering from Norton, so the range of person products starts at Standard.

The latest version has dropped the ‘Security’ from its name, in favour of ‘360’ as it aims to provide a more complete service. With it the cheapest ‘Basic’ version has gone, with Norton streamlining its lineup.

Norton 360 Standard includes in-depth malware protection, as well as a two-way firewall and a premium level of customer support while being available on both PC and Mac. This licence will allow you to protect 1 PC and 1 Mac.

Norton 360  Deluxe includes the above and allows protection for up to 5 devices (PCs, Macs, smartphones or tablets) including a web portal where you can manage the protection for your selected devices.

Norton 360 Premium is the top of the line product from the company, and you’ll get everything that comes with the Deluxe package including family safety features, automatic file backups and 25GB of secure cloud storage. With this package you’ll be able to protect up to 10 devices too.

Bitdefender seems to offer better value than Norton when comparing features, while also having the option of a free version to try out first. Norton’s offer of a premium customer support is unique though, and the top packages allows you to protect up to 10 devices across PC, Mac, phones and tablets.

The best way to test a product’s effectiveness is to test it. Testing an antivirus yourself can be dangerous so we would highly recommend that you leave it to the experts.

Both AV-Test and AV-Comparatives conduct extensive testing on all leading antivirus software regularly so you can find updated results to inform your purchasing decisions. The tests will cover a wide base but the most relevant for home users will be the ‘real world’ tests.

For the February 2019 Windows test from AV-Test, both Norton and Bitdefender rank at the very top of the pile. Norton received full marks with a score of 6 in the Protection, Performance and Usability categories while Bitdefender came in just below scoring a 5.5 in all three categories.

AV-Comparative’s real-world protection test at the end of 2018 saw Bitdefender take the top spot above all other products with a 99.9% protection rate, while Norton fell just behind with a protection rate of 99.6%.

Both Bitdefender and Norton are consistently found to offer some of the best protection on the market. Defending your computer is not a static job, as your protection will evolve to protect you through software updates as new threats are discovered and countered. This means there is rarely a consistent ‘best’ solution, but you can certainly count on both Bitdefender and Norton to be among the fastest and most consistent products in the market when it comes to countering new threats.

Bitdefender vs Norton: Which runs better on your computer?

For an antivirus to do its job it needs to run constantly in the background of your system so it can defend against any incoming malware attacks. This means it will constantly be taking a portion of your computer’s resources to do this which can have a negative effect on the rest of your system.

We’re going to take a look at the performance tests for Bitdefender and Norton to see which one has the least impact on your system’s resources.

AV-Comparatives performance test takes a look at exactly this metric with their performance tests. It runs a variety of different tasks including file copying, installing and uninstalling applications, browsing websites while each antivirus is active and running on a machine.

Both Bitdefender and Norton received the top award with Bitdefender only dropping a point when files were being downloaded, which suggests it may slow down internet speed slightly because of the way it monitors it for any threats. Norton drops a single point when it comes to archiving/unarchiving files, which suggests it could have more of an impact on a computer’s CPU.

Both Bitdefender and Norton proved to be excellent when running on your PC, making efficient use of the resources and not slowing the machine down too noticeably. The test results suggest that both are in the top tier of all antivirus programs, suggesting that the difference between the two is negligible.

Bitdefender vs Norton: Which is easier to use?

Perhaps one of the most important aspects of any antivirus is how easy it is to use. An antivirus program is filled with a wide variety of complicated software, so ensuring it communicates its features and allows you to control them in an easily accessible way is essential.

The good news is that both of these programs have been built from the ground with this in mind, making them both nice and easy to use. 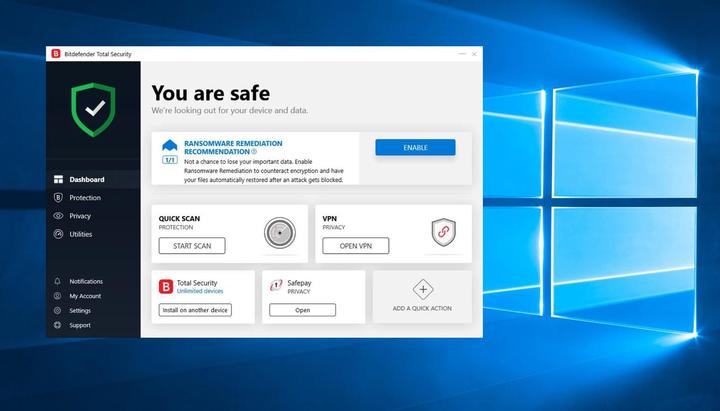 The menu on the left side of the application allows you to navigate through the various options. The dashboard provides an overview of your device, while the Protection, Privacy and Utilities sections are fairly self-explanatory. Below this, you can manage notifications, specific settings and your account setup, as well as suggestions for things you’d like to see in future updates.

The Dashboard is the first thing you’ll see, with a nice big ‘You are safe’ indicator to make it easy to see if everything is working as it should be. 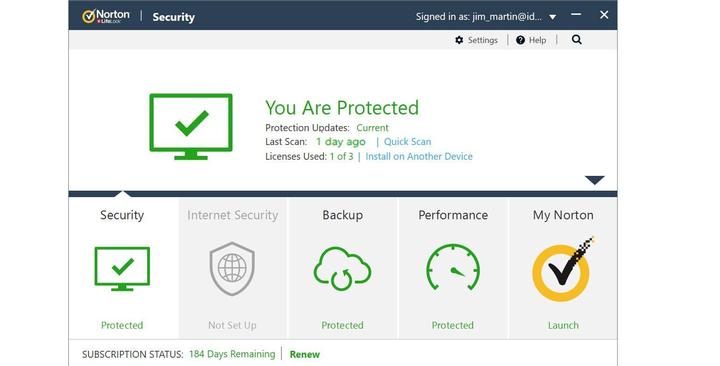 Norton’s interface, in contrast, is much brighter but also looks a little cleaner. The screen you’re presented with when you open the application also shows off the important information, telling you if you’re protected and the last time you scanned your system.

Both applications are easy to use and navigate, offering attractive looking interfaces which are easy to find your way around. We do like the inclusion of an autopilot mode on Bitdefender though, allowing you to enable it and let it do its own thing, knowing that you’re safely protected.

We’re very impressed with both of these antivirus programs. This section of software development changes almost every month with teams working around the clock to make sure their offering is the best it can be.

Bitdefender has consistently been at the top of our  best antivirus chart, but the affordability and plentiful feature set from Norton 360 Deluxe just about edge it into second place. As the name implies, if you want Total Security go with Bitdefender, but Norton should provide everything most people are looking for.

However, we gave both services a full five star reviews, and you can’t go wrong with either for most things.