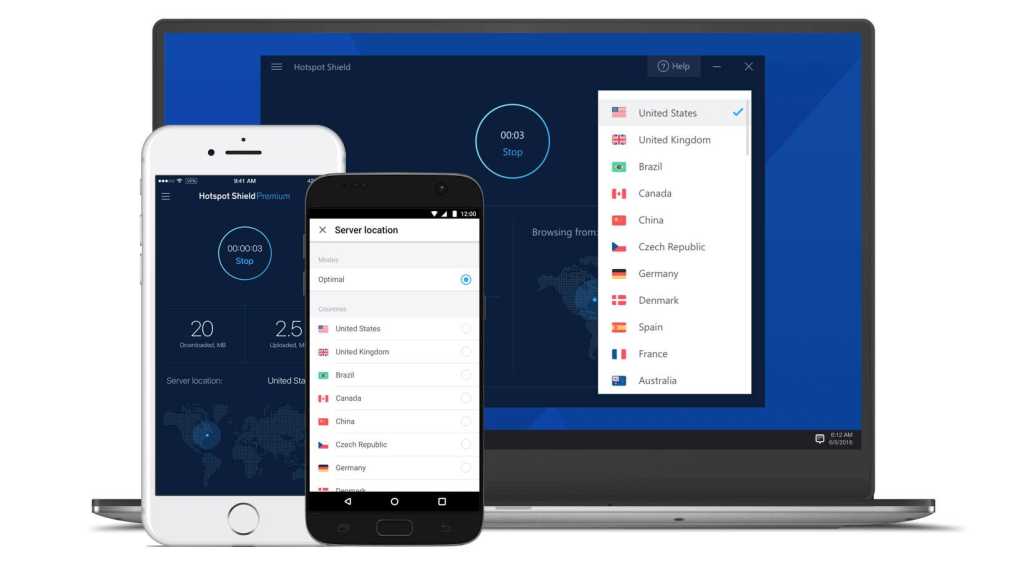 Hotspot Shield is best known for its free VPN service, but the paid-for Premium version is a lot better. It’s US headquarters and logging policy may put you off, but if you want a supremely easy-to-use VPN for securing public Wi-Fi and browsing the web anonymously, it’s a fine choice.

Hotspot Shield is probably best known for its free VPN service. That exists still, and you’re free to use it, but here we’re reviewing the Premium, paid-for service which offers better speeds, unlimited bandwidth and a far larger choice of locations.

Hotspot Shield (HSS) is based in the US, so that will be the first black mark for some people. The US is one of the “14-eyes” which is a group of countries which share information with each other. You can read through the  privacy policy which is very clear on the point that HSS does not store or share your IP address.

But there are a few things in there that might put you off Hotspot Shield. Like CyberGhost, HSS aggregates data about how you use the service in order to optimise it, but it goes further and logs the websites you use, information about your device, Wi-Fi networks and more. Again, this is all done in the name of improving the service.

It’s also at pains to point out that you do not need to create an account to use the service (the free one, that is), and that if you do, it only receives your email address: payment is via third parties, so the details aren’t linked to your online activity. There is no option, though, to pay anonymously.

If you do use the free service, some personal data will be handed over to advertisers. It’s a reminder of why you should pay for a VPN and avoid free services.

Apps are available for Windows, macOS, Android, iOS and there’s a Chrome extension too (be sure to install the Premium version, not the free proxy).

All apps have a similar and very simple interface. The first time you see it, there’s only a power button: press it and you’ll be connected to the best server, which was the US in our case.

When connected, the interface shows which country you’re browsing from, how long you’ve been connected, a running total of the amount of data uploaded and downloaded, and your virtual IP address. The latter is the odd one out, an unnecessary inclusion when the aim is simplicity. 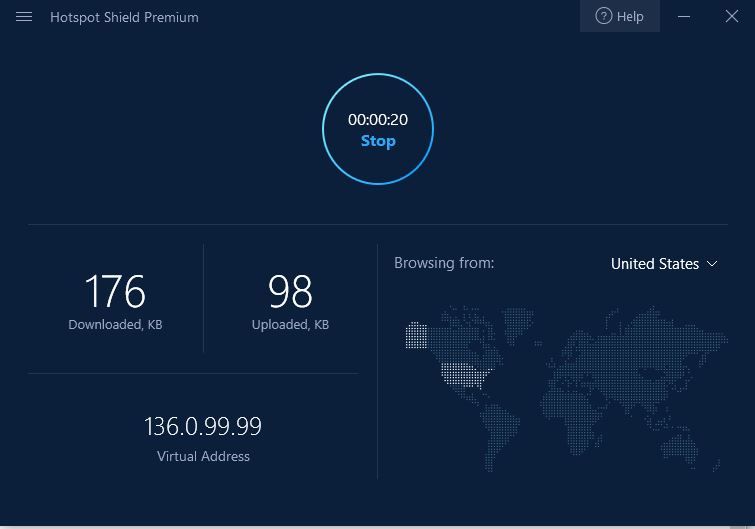 When you next press the big power button, you’ll be connected to the best server again. You can’t select a country first, then connect. You have to connect, then use the ‘Browsing from’ drop-down menu.

You can’t pick a specific server: your choice is between the 25 countries in the list. That’s fewer than many rivals, but it does include US, UK, Australia, New Zealand and quite a few European countries.

Since there’s no server list, you can’t see the load on any server, the ping time or whether it’s optimised for streaming.

It goes on to clarify that this approach doesn’t compromise your privacy or security, stating “The routing rules and logic all happen in real time on the client, ensuring that information about user browsing is not visible and is not logged on Hotspot Shield servers. We do not keep logs of your online activities and never associate any domains, or applications that you access while the Hotspot Shield VPN is connected with you, your device, or your email.”

Ultimately, this way of doing things is good for anyone who doesn’t want to get bogged down with options and settings: the only thing you ever have to do is choose a country and you don’t even need to do that most of the time. Just bear in mind that because of the proprietary protocol, you can’t use HSS with TOR and there’s no ‘double VPN’ option that you get with some rivals.

The Windows app defaults to ‘protect unsafe Wi-Fi ‘ option rather than protect all Wi-Fi networks, but this is one of the few settings you can change. Oddly there is an option to ‘Prevent IP leak’ which is, at least, enabled by default. Quite why there is an option to turn it off is hard to imagine: hiding your IP address is fundamental to any VPN service. 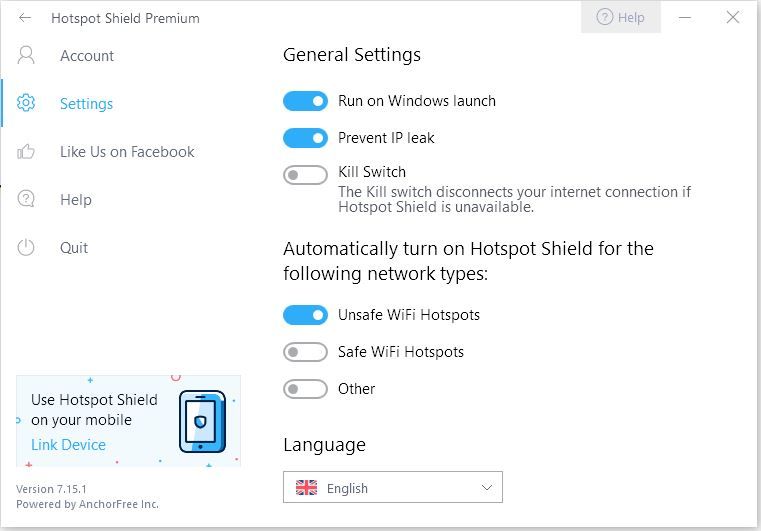 There’s a kill switch as well, but it cuts the internet connection for all apps and isn’t configurable to only disconnect certain apps. The only other option is to choose whether HSS runs automatically when Windows launches, but again it isn’t as configurable as some rivals which let you pick auto-launch for specific apps.

This is in keeping with the ease-of-use theme, however. What’s missing is an app for Amazon Fire TV streamers, but if you don’t have one of these, you won’t mind.

However the Hydra technology works, it does work. We had no issues streaming from US Netflix, and we found that speeds were very good from all the countries we tried. As ever, it’s tricky to test and report on VPN speeds as they depend on so many factors including your own internet connection speed, location, chosen server, time of day and even day of the week.

We had only a couple of minor problems. When we first installed HSS on Windows, it automatically connected to a US server. But upon checking IPleak.net, we found we had been assigned a German IP address and DNS servers. We then tried connecting to the German server and found the DNS servers were German but our IP address was from the Netherlands.

A manual change to the US server fixed the issues: both IP address and DNS servers were in the US, and it was smooth sailing from then on.

HSS uses some virtual server locations, where the physical location of the server can be different to the IP address ranges it hands out, so this could well explain the strange goings-on.

We tried out the 24/7 live chat, which was answered quickly with good technical knowledge. Previously you had to use a contact form and wait for a reply, so this is a great improvement.

There’s a seven-day free trial, but you have to enter your payment details and cancel if you’re not happy: 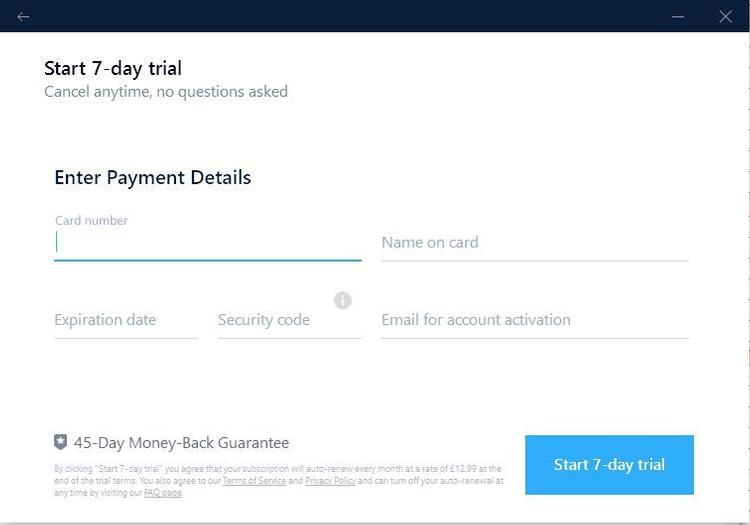 Hotspot Shield isn’t the cheapest around, then, and you might well prefer to opt for a VPN that’s based outside the “14-eyes”, offers a Fire TV app and has a no-logs policy. Two immediately spring to mind: NordVPN and ExpressVPN.