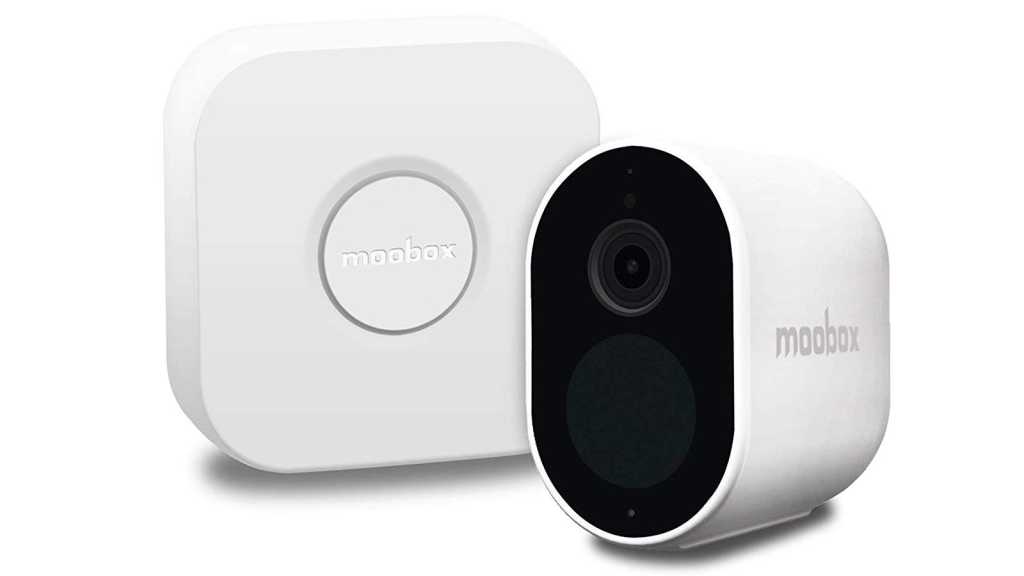 A wireless security camera that works indoors and outdoors, day and night, and that can be hooked up to a system including up to four cameras, Moobox ProXT will appeal to many users who are new to home CCTV. However, it’s a little too basic and, even if you can live with the constant notifications caused by inadequate motion-detection settings, the video-playback controls are limited. All these notifications place a huge strain on the battery, which means the advertised four-week battery life is not likely to be achievable – at which point the need to recharge it via the hub is a pain.

For those taking their first steps in home security and CCTV the Moobox ProXT appears to be an attractive package, a wireless full-HD security camera that works indoors or outdoors, day or night. It integrates night vision up to 16ft, motion detection and two-way audio, you can choose between free cloud- or local storage, and it can operate as a wireless extender.

The trouble is that’s all it offers, and both the camera and the accompanying mobile app are far too basic to be of any real use, especially when faced with similarly priced yet more capable rivals. (See Best Home Security Cameras.)

The Moobox ProXT is available via Amazon ( buy here), where it is currently discounted from its £189.99 retail price to just £115.99. This package includes the necessary hub and a single outdoor camera (it can be used indoors too, of course, but you can also add on cheaper HD and indoor-only cameras).

Extra outdoor cameras cost £84.99, or you can buy HD cameras for £59.99 and indoor full-HD cameras for £69.99 each. Each hub can support four cameras in total, potentially giving you complete coverage of your home and its surroundings.

Before you can position the Moobox where you want it you’ll need to fully charge it. Frustratingly this must be achieved via the USB port on the hub rather than using any old USB power point. Though the hub can connect wirelessly to your router, the connection is much stronger when wired in over Ethernet, but the location of the router in our home makes it difficult to plug in the Moobox each time the battery depletes.

A word of warning: Moobox states that you should use ONLY the USB port on the hub to recharge the camera. We typically ignore such warnings, but this is actually our second review sample because, erm, we killed the battery on the first. To be fair we think it was a faulty sample to begin with. However, the need to take down the camera to recharge it every few weeks may mean that in many households it gets forgotten about and ends up nothing more than a decoration that might deter some intruders if you’re lucky.

Having charged the camera setup is pleasingly simple and very fast, making it achievable for any user. You must sync the Moobox camera to its hub, which is achieved by pressing the button on the hub and the button on the camera. Then you install the free Moobox app on an Android phone or iPhone and follow the instructions.

The camera can now be mounted into position and left there until the battery depletes. Since this is the outdoor version you can use it inside or outside, and its IP65 certification means it is adequately protected against poor weather. The only caveat is it will need to remain within range of the hub.

Each camera comes with a base that can be screwed to a wall, and the camera itself is attached magnetically to this base. Its rounded joint means it can be positioned at nearly any angle, though the weight of the camera prevents you pointing it directly upward or downward.

Unfortunately, the fact there is merely a magnet attaching the camera to its base means the camera itself is not secure, and there’s nothing to stop someone simply pulling it off the wall. You should still have the recordings stored in the cloud or on its microSD memory, but Moobox doesn’t guarantee its cameras from theft like Ring does.

Having set up the camera Moobox says the battery should last around four weeks, which is based on it making 10 motion-detection recordings and five live-viewing recordings per day. In our testing it picked up many more motion-detection recordings than this, so it should come as no surprise that it lasted only a week. However, it was a surprise, because right before the battery died it was showing 70% capacity remaining in the app. The 3200mAh battery then takes around three hours to recharge via the hub.

There really aren’t very many settings within the Moobox app that you need to worry about, which is both good and bad. Good because it means you can just mount the camera and forget about it; bad because you’re going to be plagued with notifications, and you can’t turn these off.

There are some basic settings for motion detection, including a scheduler that lets you decide when you want it to pick up motion. Since the camera will record only when it detects motion or you initiate live viewing, we’re not sure why you wouldn’t just leave it on all the time. Perhaps if you had workmen in who were frequently walking past the camera it might save you getting frustrated by the sheer number of notifications on your phone.

You can also set the motion sensitivity to high, medium or low. But that’s it. You’ll be notified every single time it picks up any kind of motion, and it isn’t clever enough to distinguish between someone breaking your window or a van driving down the road. What you really need here is some sort of configurable motion zones.

When the Moobox picks up motion it records a short video clip, the length of which you specify in the settings – 10-, 15- or 30 seconds. The video itself is good, thanks to the camera’s 120-degree field of view and 1080p resolution, and even at night or in low-light the footage is clear.

Unfortunately, you cannot view this video until the Moobox has finished recording (at which point the intruder may have already left), and there’s no way to jump forward or backward within that footage. The motion-detection video also lacks sound, despite the Moobox supporting two-way audio. There is an option to download the footage, should you need to call on it later.

On paper the Moobox sounds like a great security device at an attractive price, but it frustrates with its basic motion settings, constant notifications, inaccurate battery monitoring and the need to be recharged via the hub every time the battery runs low. Video playback options are also limited, and the camera itself is too easy to whip away.