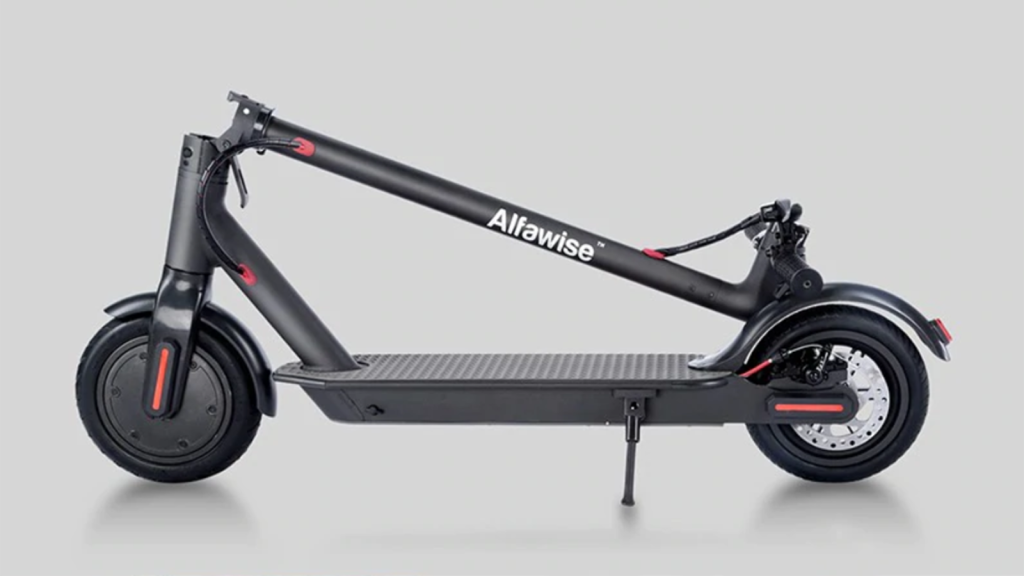 The Alfawise M1 is a cheaper Xiaomi M365 copycat with an integrated speedo, a dual-braking system and more durable tyres. It’s buckets of fun, with a top speed of 25km/hour and able to go up to 30km. Build quality lets it down a touch, and it’s difficult to view the speedo in direct sunlight. Also be wary of the dramatic braking and automatic acceleration, though once you get the hang of the throttle the cruise control feature is useful. Since we reviewed the Alfawise M1 the company has made some improvements to its design that enhance comfort, durability and monitoring of stats, and it has increased the motor power from 250W to 350W. The second-generation model is available here at £285.45.

If it wasn’t for the Alfawise logo on the steering column you’d be forgiven for mistaking this M1 for Xiaomi’s popular electric scooter. The design is almost identical, right down to the size and weight, but there are some subtle differences between the two – and not least the price.

Xiaomi’s electric scooter is now officially available in the UK at £399.99, but this Alfawise M1 is distributed solely through Chinese retailer GearBest.

Since we reviewed the Alfawise M1 the company has made some improvements to its design that enhance comfort, durability and monitoring of stats, and it has increased the motor power from 250W to 350W. The second-generation model is available here at £280.60/309.67€/US$345.99.

There is a free delivery option for UK shipping, but you could be waiting up to two months for the scooter to arrive. Other postage options are reasonable, at £15.24 for 2-4 business days, and £8.72 for 3-7 business days. Remember that this is rather a large and heavy item – the scooter alone weighs 12.5kg.

The problem with shipping from China, however, is that in the UK we are required to pay import duty. This is calculated at 20% of the value on the shipping paperwork. Remember to factor this into your budget, because if you are sent an invoice from customs you are obliged to pay it.

It’s worth pointing out that GearBest also stocks the Xiaomi alternative at less than the UK retail price, but the same caveats apply. Click here to buy the Xiaomi M365.

Plus, there’s another Alfawise scooter, the X7, which we have reviewed. 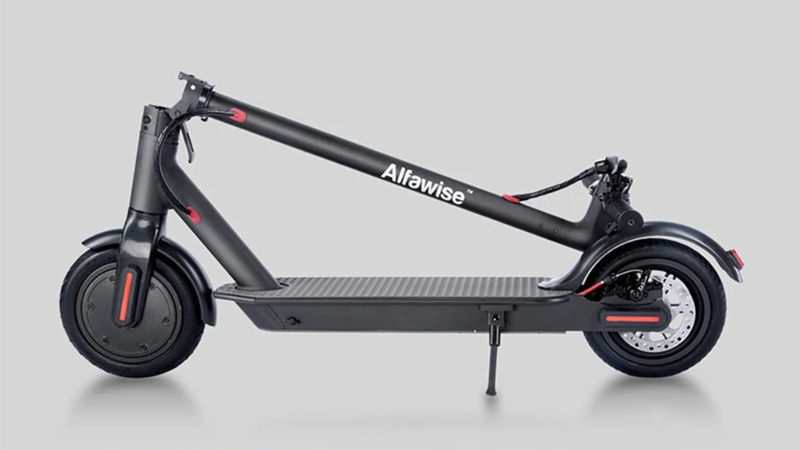 Alfawise M1: What it is, what it does

The M1 is an electric scooter designed for adults with a 100kg maximum load. It has a top speed of 25km/hour, and will keep going up to 30km (depending on how fast you push it). An energy-saving mode maxes out at 15km/hour.

There are some nice features here, including cruise control. It’s tricky to get the hang of, but in essence if you maintain a constant speed for a few seconds until you hear a beep then let go of the throttle it will kick into action. If your timing is off, however, let go of the throttle and the scooter will continue to accelerate until you tap it again or brake. It can be disconcerting at first, but these two features together can counteract thumb fatigue.

The brakes are pretty sharp, so be warned. There’s an ABS system at the front, and a mechanical disk brake at the rear. Even at top speed the braking distance is just 4m. Despite the double brakes there’s just a single brake lever, which is mounted on the left side of the handlebars, along with a bell. 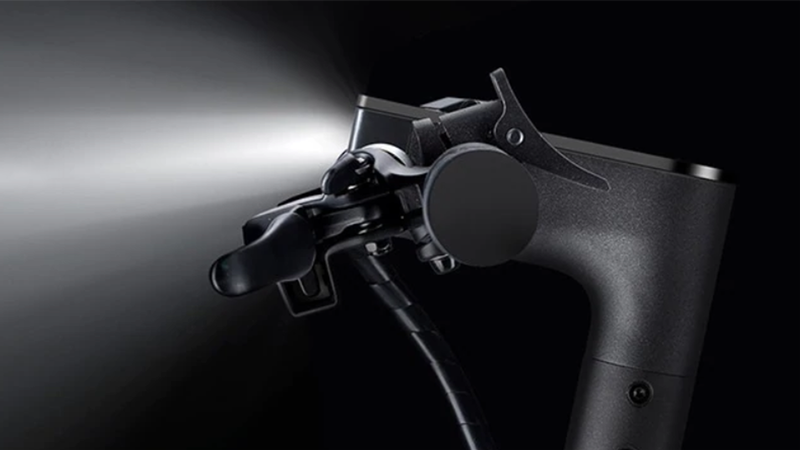 When you brake the rear tail-light will flash to warn anyone behind you, and there’s also a headlight at the front which is activated by tapping the main power button three times in quick succession. (Two taps switches between high-power and energy-saving modes.)

One of the key differences between this Alfawise M1 and its Xiaomi lookalike is the speedo that sits atop of the steering column. It’s very basic, and actually very difficult to see in direct sunlight due to the glossy surface, but it’s handy for knowing exactly how fast you’re going without having to consult a mobile app as you do with the Xiaomi.

There is no mobile app for the Alfawise, but you really don’t need one. Four LEDs above the power button give you an estimate of how much battery power remains, and you can tap that button to switch between modes and turn on and off the lights. The only thing you won’t be able to do is keep a check on how far you have travelled.

Another key difference between this and the Xiaomi is its front vacuum tyre, which is inflatable, apparently sturdy, and should offer excellent shock absorption, according to the company. Unfortunately, in our testing we had to replace this front tyre with an airless version, so the resulting experience was perhaps not as smooth as it should have been.

Long story short, on arrival our review sample had a flat front tyre. In attempting to pump it up we managed to break the valve, and found it impossible to get hold of a replacement that was the same size. Alfawise does not stock spare parts and directed us back to the supplier.

You can buy spare tyres from GearBest, currently priced at £12.41.

Whereas Xiaomi fits pneumatic tyres front and rear, Alfawise has also made some tweaks at the rear with an airless honeycomb tyre for enhanced durability. Both tyres are reasonably grippy, but we do advise caution if you’re going to use the M1 in wet conditions. Also note that it is rated splashproof (IP54), but is not fully waterproof. 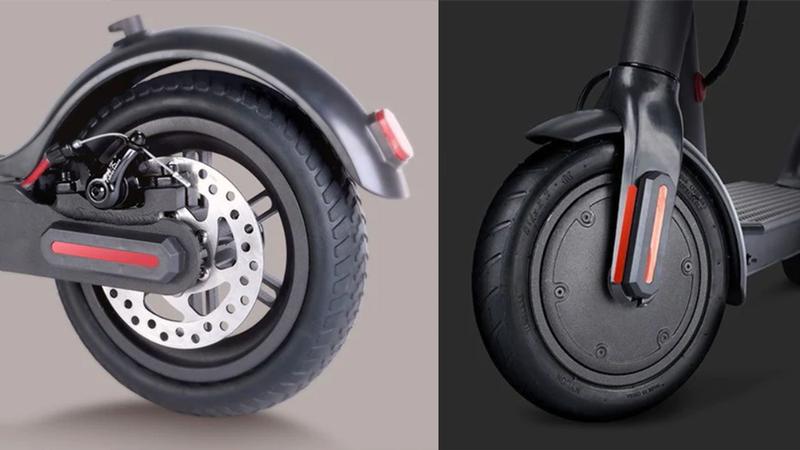 This is another foldable electric scooter, and in exactly the same way as you can with the Xiaomi you can unlock the steering column and lay it down flat against the tyres. Here it is held into place by a small plastic clip, and there’s a kickstand on the underside of the scooter for preventing it from falling down.

Folding up the Alfawise takes merely a few seconds, but while doing so might make it easier to throw in the back of a car, it doesn’t really help a huge amount with portability. At 12.5kg in weight and folded dimensions of 108x43x49cm, the M1 is simply too big and bulky to carry for long distances. This is exactly the same problem we found with the Xiaomi, and it’s going to be a lot easier to continue scooting along on it than attempting to carry it.

When the battery eventually runs down the M1 charges in around six hours. It is supplied with a two-pin EU plug, so if you’re using this in the UK you will need an adaptor.

On the surface the Alfawise M1 appears to be a cheaper Xiaomi copycat with enhanced brakes, an integrated speedo and (apparently) more durable tyres, and thus you would presume the better deal. But we actually prefer the Xiaomi for its design and build.

From a distance these two electric scooters are identical: they are the same size, same shape, same weight, even with the same colouring. But when you get closer you’ll notice some differences that detract from the M1’s overall design.

That huge Alfawise logo on the side is not especially attractive, and its main board is more angular than the rounded Xiaomi, which we feel makes it seem somehow cheaper. The handlebars are just as comfortable and grippy in use – and actually detachable, whereas the Xiaomi’s are not – but the central column lets the scooter down. 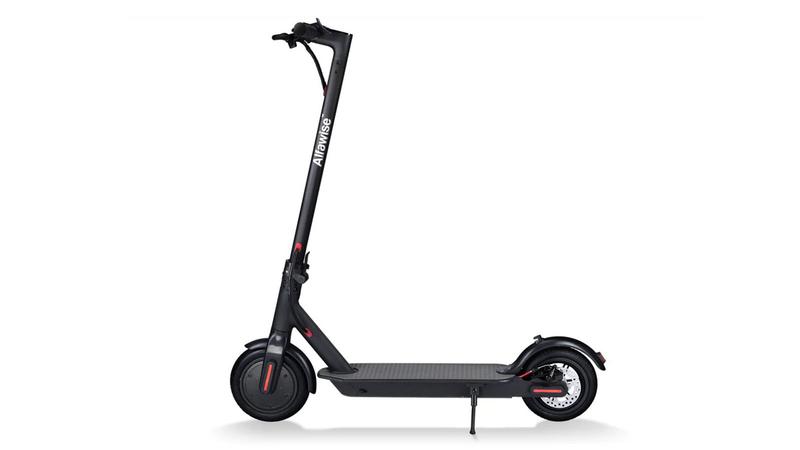 It has the same glossy surface as the Xiaomi, but with less attention paid to quality control. When it arrived we thought it had a plastic screen cover over the top, but it was actually just a bit scratched and messy looking. Then in use, though we love the idea of an integrated speedo, the blue LEDs just aren’t bright enough to be easily visible in sunlight, and therefore become more of an annoyance than an aid.

Another point in the Xiaomi’s favour is its faster acceleration. We ran the electric scooters in several head-to-head races and the Xiaomi won every time – though they both have a top speed of 25km/hour, the Alfawise takes much longer to get there, and no amount of pressure on the throttle button will make it get there any faster.

The automatic acceleration of the M1 once you take your thumb off the throttle is also disconcerting, and the brakes a little too sharp. If you’re letting children use this scooter then this has the potential to be dangerous – they could end up going much faster than they (or you) intended. In these situations we’d recommend putting the Alfawise into energy-saving mode so it can’t go faster than 15km/hour, and making sure they’re wearing a helmet and staying well away from public roads.

Big kids are going to love the Alfawise M1, with its top speed of 25k/hour and integrated cruise control. It has several points in its favour over the more expensive Xiaomi, including an integrated speedo, but the build quality is inferior.