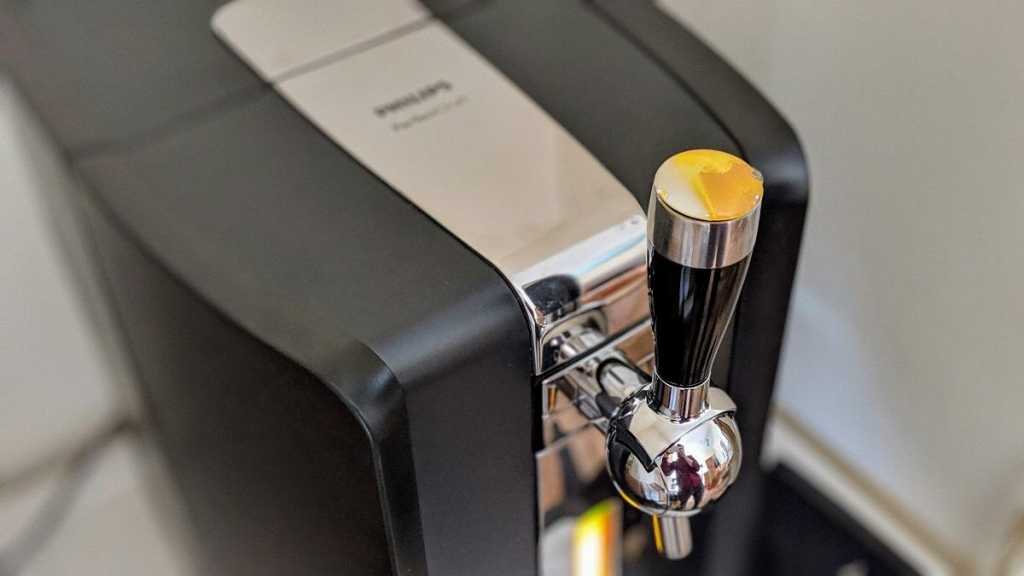 If you want beer on tap at home with minimal hassle then the Philips Perfect Draft is just about, well, perfect. The machine is easy to get to grips with and has a handy LCD screen. There’s a fairly wide range of beers, which will satisfy the taste buds of most drinkers.

There aren’t many beer gadgets out there but the Philips Perfect Draft brings beer on tap to your home with minimal hassle. Here’s our full review.

The Perfect Draft is available from Amazon but you’re much better off getting it from a specialist retailer. You can get it cheaper than the stand-alone price of £249 Amazon offers if you buy it from Beer Hawk, which supplied our review sample.

There are various bundles that come with a keg and you can get 10% off your first order if you sign up to the newsletter, too. It’s a fairly high cost but it’s not like a phone where you’ll want to upgrade it every few years.

Kegs range from £29.90 to £41.90 which for 6L isn’t exactly the best price per litre for beer but you buying into the tech here. However, there’s a £5 deposit on each keg so you can send them back and get credit to spend on the next keg (or other stuff if you like).

There’s now a PerfectDraft Pro you can buy with adjustable temperature, connected app and more.

There are a few parts to put together in order to build the Perfect Draft but it’s simple enough and the instructions are clear. Learning to put a keg in the first time might seem a little daunting but it’s easy enough.

The instructions aren’t quite so clear for this but you can watch Beer Hawk’s videos which make it much easier to understand.

Once the keg is in, you might need to wait a long time before the beer is cold enough to pour and drink. Our suggestion is to get it all set up straight away as typically the kegs will be pretty cold from sitting in a courier’s van.

If you want one for a party, don’t leave it until the same day as it can take up to 15 hours for the keg to cool down to three degrees centigrade. Our other tip is to put the keg outside overnight (during cooler months, of course) then put it into the machine in the morning. You can also make use of your fridge if there’s space.

The Perfect Draft machine is a combination of plastic and metal. It doesn’t feel cheap but also not the most luxurious machine around. It’s fairly bulky so you’ll need to bear this in mind if you want it sitting in the kitchen. It’s bigger than most coffee machines for comparison.

It’s worth noting that you don’t need to worry much about cleaning lines as each keg comes with a new connector. One odd thing is the way the instructions told us to choose a magnetic cap style for the tap, yet both in the box are the same.

There’s not a great deal of complexity here, which is nice. Once you’re set up and the beer is cold enough simply pull the handle and pour beer into your chosen glass.

The main feature here is an LCD screen which displays a few different bits of information starting with the temperature of the beer. You’ll see this go down as the system cools and will turn from red to green when the beer is ready.

You can pour beer at a higher temperature and the machine won’t stop you but it’s not advised, mainly because you’re likely to get a glass of foam instead of liquid. We tried it at eight degrees (C) and this was certainly the case.

Things are still a little foamy at three degrees (C) but not half as bad. We recommend using a glass with plenty of space for head.

If we were nit picking we’d like to be able to adjust the temperature for different beer styles but this isn’t the end of the world. However, there aren’t really styles we’d rather drink at a warmer temperature like stouts available anyway – which is a different issue.

That screen on the front will also tell you how many days you have left to drink the beer, essentially a countdown from 30 as well as how much beer there is left in the keg. This is shown in blocks similar to many modern car fuel gauges. You can take your time then, but it also great for parties and sporting events like the Super Bowl.

This works well generally but we had a minor issue with our second keg where the volume bars dropped quite quickly, despite not pouring loads, then went back up a day later so it’s not 100% reliable.

Although the machine works very well, you might want to look at the range of kegs available before you splash the case. Note this is not able to accept 5L mini kegs you’ll find in the supermarket. Instead they are special kegs that only work in the Perfect Draft.

Beer Hawk has a fairly large range of beers available with quite a few different styles ranging from lagers to Belgian tripels. When we first reviewed the Perfect Draft in March 2019, there were 30 kegs available. Now taking another look in January 2020 there are 38 and that’s with a few removed since Christmas.

The original line-up, including Leffe, Becks and Goose Island, might not be broad enough for the craft beer enthusiast out there but for others it will be perfectly good. Now in 2020 the likes of Tiny Rebel and Thornbridge have been added with two kegs each. Seeing Jaipur in this format is great news.

Still, it comes down to your personal taste and opinions of breweries (there are seven variations of Leffe, for example). While the range has got bigger, we’re still waiting for something darker like a porter or stout to be added, which is a shame. You’re only option in this area remains Leffe Brune.

The beers taste good, although one of the ones we tried – Goose Island IPA – didn’t taste how we know it to taste from bottles or at bars on draught. The flavour profile was lacking a punch from hops we’d normally expect from this beer. The keg was coming to the end of its shelf life thought so this will have some impact.

It might sound a little expensive, but this is an investment type of purchase. The Perfect Draft will last much longer than your (probably even more pricey) smartphone. It’s great for parties but can also be used for more casual drinking over several days or weeks.

Overall, the machine achieves what it sets out to do – bring beer on tap into your home in an easy and convenient way. We only have very minor niggles with how the whole thing works.

The beer selection is good and has been improved since we first tested the machine. The likes of Tiny Rebel and Thornbridge will tempt more drinkers, but we still crave something darker in the range.