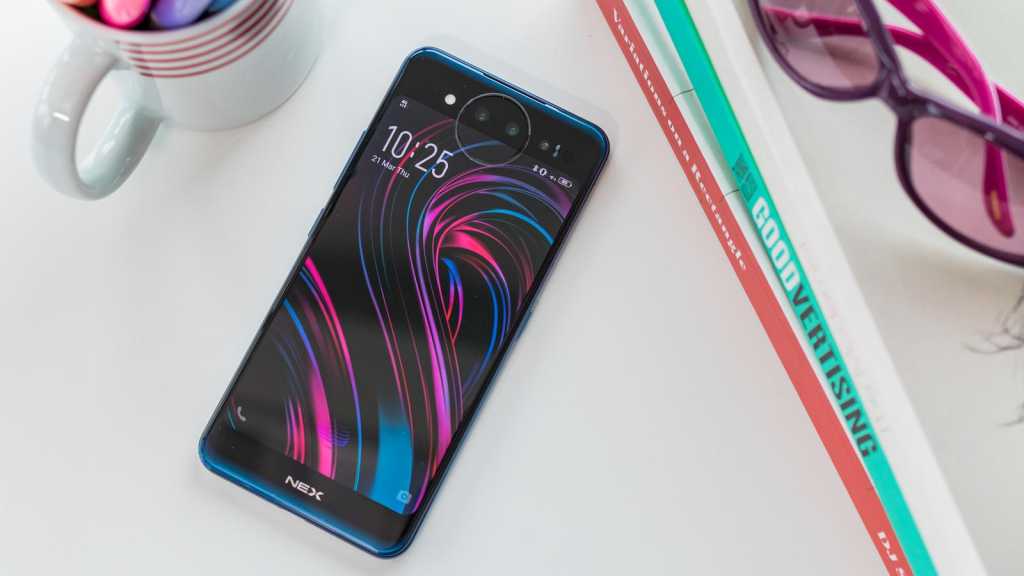 At its heart, the Vivo Nex Dual Display is a fairly silly phone. No-one really needs a second display on their phone, and as solutions to the notch problem go, it’s one of the more extreme – most people would probably be happier with a slider or a cut-out. Still, strange as the concept is, Vivo has mostly made it work. You probably won’t use the second screen often, but when you want to it does work well, and for those who take a lot of selfies or film themselves the ability to do so with a better camera could well be worth it.

Have you ever looked at your phone and just wished it had even more screens, so that you never had to look at anything that wasn’t Twitter? Vivo has, resulting in the really rather odd Vivo Nex Dual Display.

As the name suggests, the Dual Display features not one, but two screens. And we’re not talking about a mini extra notification bar display, as on the LG V20, but a full-fledged second screen on the back of the phone.

It’s one of those ideas that’s so mad it just might work. And while in practice the Nex Dual Display creates more problems than it solves, it’s a novel solution to the problem of selfie cameras, and does offer a genuine full-screen display, with no need for disclaimers.

The Vivo Nex Dual Display only officially released in China, so if you want to get it anywhere else you’ll have to import it. The best option seems to be Giztop – you can grab the phone from there for £650/$869 at the time of writing, though bear in mind that you’ll likely have to pay more on top for shipping and potential customs fees.

It’s also on Amazon US right now for $780 – though again, there are shipping fees to take into account too.

That’s certainly not cheap – but this is a seriously specced out phone, and it’s somewhat inevitable that you’ll have to pay a bit extra for the novel design.

The first question most people tend to ask about the Nex Dual Display is a simple one: why?

Fortunately, the main answer is equally simple: selfies. The second display is mostly away to get around the industry’s ongoing frustration with selfie cameras getting in the way of phone screens, whether it’s through bezels, notches, or punchhole cameras.

Instead, you just get the triple rear camera setup and an extra screen that you can switch on any time you want to take a selfie – with the added bonus that it means you’re taking selfies on a camera that’s better than any you’re likely to find on the front of a phone.

One perk is that in addition to using it for selfies it can also help with portraits – you can switch both screens on so that both the shooter and the subject can see screens to show how the photo’s going to look.

The downside is that the rear camera is merely fine, so it never feels like you’re really able to make the most of the novel setup. As you’ll see in our gallery (you might have to click to access it) the camera handles low-light well, and does decent bokeh (with only slight blurring of my hair), but it lacks detail in long-range shots – the result of only having a 12 Mp, f/1.8 main lens with just a 2Mp depth sensor and a TOF lens to back it up, meaning no wide-angle or zoom.

Of course, that’s not all you can use the second screen for. The 5.5in, 1080×1920 screen can be used to fully navigate the phone – it even has its own power button on the opposite side of the body – though as soon as you open any apps they’ll be squished in to maintain the 19.5:9 aspect ratio of the main display.

That means using the back screen feels awkward and compromised – not helped by the raised camera ring that cuts into the top, even through the giant bezels – but it does help with multi-tasking. The phone will remember to keep different apps open on each screen, so you could keep WhatsApp open on the back display and quickly switch back and forth between that and your Instagram feed.

Vivo suggests a few other use cases, but they’re mostly daft: there’s face unlock (from the back of the phone, so you’ll have to flip it over to use); using the rear screen for controls while gaming; and drawing on the front screen while it’s off to activate animations and graphics on the back.

To be blunt, you don’t need the second display, and nine times out of ten you’ll forget it’s even there – except for the constant worry that you’re now twice as likely to smash your screen – but that’s fine, because it’s true purpose is help make the most of the full-screen front panel.

It’s almost worth it too, because the front screen is pretty great. The 6.4in, 1080×2340 Super AMOLED panel runs almost to every edge – except for a slight chin – with no notch, cut-out, bezel, or other distraction to get in the way.

The full-display design looks great, though sadly the panel itself is fine rather than fantastic. The colour range is solid but max brightness is a little dim – not helped by the auto brightness settings, which often set the screen to be uncomfortably dim.

Still, after a couple of years of notches and punch-holes blocking parts of the display, the novelty of a true corner-to-corner display doesn’t wear off fast, and anyone who misses the days when phone screens were straightforward will probably love the way the Dual Display looks from the front.

It also boasts an optical in-display fingerprint scanner which is one of the fastest and most reliable we’ve used yet. Every now and then it would fail because I didn’t press down hard enough, but that was rare – and when it gets it right, it takes less than a second to get you into the phone.

Beyond the big screen, the rest of the phone’s style is a bit of a mixed bag. Available in blue or purple, the colour is mainly visible around the edges of the body, though it bleeds into the back bezels slightly at the top and bottom in an attractively understated way.

Obviously the big bezels on the back are a bit unattractive – and we don’t love the ‘Nex’ logo plastered on there either – but the biggest eyesore is the ring around two of the camera lenses. This can be set to light up for notifications or alerts, but it’s mostly just an odd blemish on the screen that stands out for no obvious reason.

If everything about that back display seems to be borne out of compromise, at least one area Vivo hasn’t skimped on is the internal specs.

The 845 may now be last year’s model, but it’s still an incredibly fast chip – as you can see from our benchmark results, where the Vivo Nex Dual holds up remarkably well against a bevy of flagship phones from the last six months.

Battery life is a slightly different story. The phone managed seven hours of screen time in our controlled test – in line with similarly specced devices, but nothing special – but in daily usage fared worse. We found it made it to the end of the day most of the time, but with just 20-30 percent battery remaining, so it was cutting it a bit close.

And that’s with the second screen hardly seeing any use – running that drains the battery noticeably. It’s even worse if you use the always-on displays (available for both screens). Switching this on tanks the battery so quickly that I turned it off within hours for fear that the phone simply wouldn’t make it to the end of the day.

The final caveat to be aware of is software. One welcome feature is that despite only launching in China, the phone has robust English language features – clearly Vivo knows its phones are popular exports.

The downside is you’re still stuck running the company’s custom Funtouch OS on top of Android 9. Visually it’s a fairly clean overlay, but like most manufacturers Vivo is guilty of change for change’s sake, adding in needlessly complicated menus, shifting the settings shortcuts down to the bottom of the screen, and filling the phone with a mess of own-brand software that can’t be uninstalled.

At its heart, the Vivo Nex Dual Display is a fairly silly phone. No-one really needs a second display on their phone, and as solutions to the notch problem go, it’s one of the more extreme – most people would probably be happier with a slider or a cut-out.

Still, strange as the concept is, Vivo has mostly made it work. You probably won’t use the second screen often, but when you want to it does work well, and for those who take a lot of selfies or film themselves the ability to do so with a better camera could well be worth it.

Aside from the second screen this is a solid flagship device, but it’s really only worth dealing with the hassle and cost of importing if you love the idea of doubling up your screen time. Based on this, we’re not convinced it’s for us, but Vivo has made it work about as well as anyone could.