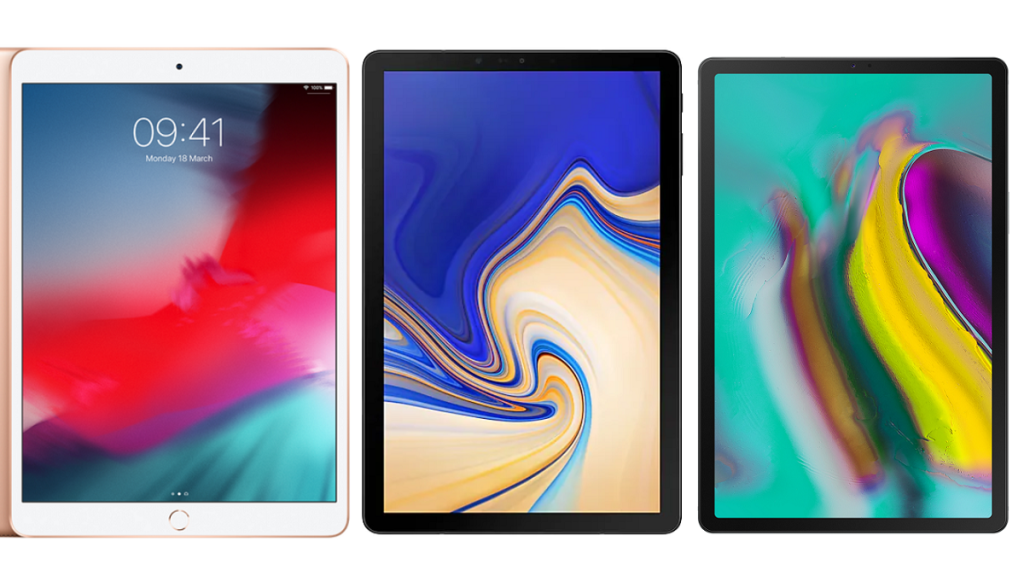 Choosing an operating system helps here and while designs are pretty similar, there’s a wide range of differences when it comes to specs. This battle comes down to details. Our pick of the three is the Galaxy Tab S5e thanks to its combination of price, design and specs.

There’s a new iPad Air for 2019 so we thought it best to take a look at how is compares to Samsung’s Galaxy tablets, the Galaxy Tab S4 and Tab S5e. Here we see how they’re different in price, design and specs.

Although there’s a new iPad Mini also, we’re focusing on the iPad Air here since it’s a full-size tablet like the Galaxy Tabs. Read our  Galaxy Tab S4 review is still a worthy challenger.

The Galaxy Tab S4 might be from last year but it still costs £599/$650 from Samsung. That makes it the most expensive here despite the Tab S5e being the new model.

It’s worth noting that it’s particularly hard to find the higher capacity storage models for Samsung devices in the UK.

The iPad Air sits in the middle here on price at £479/$499 but you have to bear in mind that Apple doesn’t include the Pencil but the Tab S4 does come with an S Pen. The Apple Pencil, if you want one, is £89/$99. Order from Apple.

On both sides of the fence you’ll need to splash out on the accompanying keyboard case if you want a laptop-like experience – which is sort of the point with these tablets. Samsung’s Book Cover is £119/$149 and the Apple Smart Keyboard is £159/$159.

You can see the new pricing structure below:

To avoid complicating the table, we’ve stuck to Wi-Fi only models rather than including the 4G cellular options. Add on around £150/$150 for that.

When it comes to design, the   Galaxy Tab S5e and iPad Air are pretty similar with metal bodies. Meanwhile, the Tab S4 (below) has a glass back which might look nice but is slippery, attracts fingerprint marks and is at risk of cracking.

One small but important thing here is that the Tab S5e is the only one without an headphone jack. An adapter is included in the box but that might not enough of a fix for you.

On the plus side, it means the Tab S5e is the thinnest and lightest tablet here by some margin. The iPad Air beats the Tab S4 in this respect.

It’s also worth noting that the iPad Air and Tab S5e have fingerprint scanners, while the Tab S4 relies on facial scanning. Smaller bezels on the S5e mean that it’s mounted on the side.

All three have metal connectors so you can attach accessories like a keyboard cover for a laptop-like experience. These are option extras, mind.

When it comes to colours the Tab S4 is just available in black or grey. The Tab S5e (below) and iPad Air are both available in three colors: silver and gold with then either a black or grey option respectively.

We’ve left the iPad mini out of this comparison because it has a smaller screen. These three tablets are all 10.5in which is a modern full-size device.

The iPad Air is a little behind on pixel density but a more important difference is that it uses a 3:2 aspect ratio while Samsung opts for 16:10. There’s no right or wrong here, they just work better for various tasks. For example, watching films and TV will be more suited to the widescreen aspect ratio of the Galaxy Tabs.

You can use the Apple Pencil with the iPad Air’s screen if you are prepared to buy it, but the Tab S4 comes with an S Pen. There’s no stylus support for the Tab S5e.

In terms of core specs, the Tab S4 and iPad Air are closely matched on things like processor and storage. Just bear in mind that only Samsung offers a microSD card slot here. The Tab S5e might have less storage at its higher capacity but is cheaper and the 128GB model comes with a decent 6GB of RAM.

Cameras shouldn’t sway your decision much but the Galaxy Tabs have higher resolution sensors at the front and back. They also have a four-speaker system while the iPad Air has two, but as mentioned earlier, the Tab S5e lacks a headphone port.

Battery life is a more important area and based on manufacturer figures, the iPad Air is a little lacking here but we’ve found iPads in the past to last very well.

What’s hugely important here is whether you opt for iOS or Android. Which is the right one for you depends on a number of factors including your personal experience and needs. If you’re a long time user of either operating system and you’re happy with it then you should probably stay loyal.

Samsung offers its DeX software (desktop experience) which is a little like having Windows on Android. The iPad Air has iOS 12 which has features like the ability to run apps side-by-side (similar to Android). If nothing else, this is a more affordable option if the iPad Pro is too expensive.

In terms of value for money, the Samsung Galaxy Tab S5e wins hands-down here with the best balance of cost, design and specs. However, it might be off your list due to the lack of headphone jack or its lower grade processor.

The iPad Air is similar to previous models but now has Apple Pencil and Smart Keyboard support – although those are fairly expensive extras.

We’d avoid the Galaxy Tab S4, despite it’s impressive specs. It’s very expensive and there’s likely to be a proper Galaxy Tab S5 in the next few months to replace it.