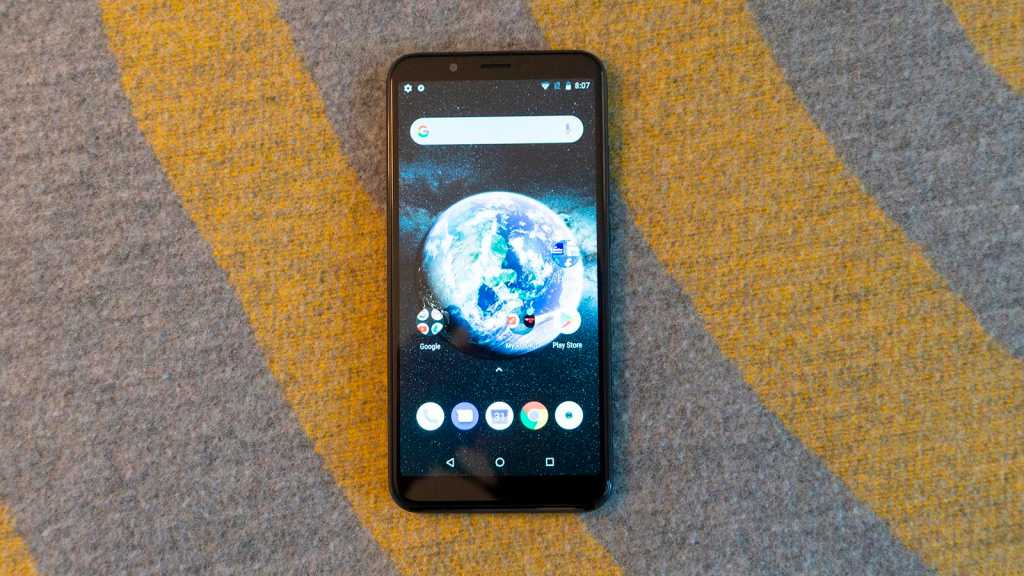 This phone is an odd product in that its glasses-free 3D screen isn’t the best part about it. Particularly in the US, the bundled year-long Rok Health service is a genuine market first that is trying to offer those without healthcare a way into legal health advice. Despite launching with middling specs and a confused marketing message, underneath the bluster of the 3D lies a phone that is trying to give people better social mobility, and that should be praised in a smartphone market full of high-end specs and posturing.

The Rokit IO Pro 3D is an odd phone. It boasts glasses-free 3D in a handset that retails for around a quarter of an iPhone XS, with middling specs, ordinary plastic design and old tech like microUSB.

But it launches in the US with the promise of bundled healthcare services which elevates parent company Rok’s intentions from gimmick to admirable social awareness. The messaging and launch of the phone are confusing, but what the phone offers has at least the potential to be somewhat life affecting for people in the US and UK, if not quite life changing like the company says it is.

The Rokit IO Pro 3D costs £249 in the UK from Amazon and $299 in the US from Walmart. It’s also available direct from Rokit.

In the US the phone comes with a year’s subscription to the Rok Health service that gives you 24/7 access to doctors for free medical advice. These doctors can then prescribe you appropriate medication.

After the year free the service costs $14.99 and legally covers the user and their entire immediate family. The phone also comes with a year’s free international and domestic Wi-Fi calls.

In the UK, the phone comes with three months of Rok Life Services with features like accident insurance.

This sets the tone for an incredibly odd but unique phone that marries these forward-thinking aspects of social improvement with, well, an odd plasticky 3D gimmick.

The men behind the Rok brand are John Paul DeJoria and Jonathan Kendrick, the former most famous for founding the Paul Mitchell line of hair and beauty products. Rok acts as an umbrella brand for a host of products and services – Rokit is the newly named smartphone division.

It is odd, then, that this message was not clear until today and that Rokit has been leading the marketing push with its bombastic claims of revolutionary 3D screen tech. The IO Pro 3D’s 3D capabilities are essentially an attempt at a mass-market hook – give people a cool technology that they can’t get on any other phone, then sell it at a realistic price point for most people and bundle the services that reflect the social ambitions of the company.

Yes, it is that convoluted. We feel that the message could be a lot clearer seeing as it is a commendable one. A further optional Rok Life Services bundle provides families with life and death insurance, subsidies on funeral arrangements, legal services and roadside assistance – something that gets lost in the 3D-led marketing and took an hour to explain properly to press in a presentation.

The phone is the purchase you make as the portal to these services. The IO Pro 3D is a black, fairly non-descript plastic phone with minimal gold branding on the back.

The screen is capable of displaying fairly impressive 3D-effect images and video, but the downside to this is that the viewing angles of regular 2D content is poor. Turn the phone a little off centre and you can see disorientating black shades necessary for the 3D feature to work.

It ends up stunting normal use of the phone, as the 3D content is restricted to Rokit-approved content, some of which it says it is developing in house. You access it through the clunkily named Rokflix 3D app.

As a Chinese made device, the IO Pro 3D has the Mediatek Helio P23 MT6763V chip also seen in Eastern phones made by Leagoo, UMiDIGI and Ulefone. It’s roughly comparable to the Qualcomm Snapdragon 625.

In our time with the phone so far it is what you’d expect from a mid-range device – a low resolution display, fairly slow performance and a vibration motor that sounds awful.

The 3D-effect display is a trick that only the human eye can see and cannot be captured on camera. The below image is from a series called Dinosaur Alive 3D that we downloaded from Rokflix 3D. The effects were decent enough at times but the trickery often made us have to refocus our eyes and often we saw double. It is not a great experience, and it hasn’t improved all that much from when we saw it back in 2011 on the LG Optimus 3D.

The quality of the 3D programming that Rokit is funding is yet to be assessed, but without any mainstream popular TV shows on board it is hard to see how this is any more than a flash in the pan thing.

For the price the phone is also a lot less premium feeling than the  Moto G7 that retails for the same $299 in the US. That phone comes with USB-C but the Rokit settles for microUSB, a cost-saving measure seen on quite a few Chinese phones. You also get a headphone jack but no headphones in the box (though there is a see-through rubberized case in there).

It ships with Android Oreo 8.1 and no mention of security or software updates, and given that this is Rokit’s first device ever we won’t count on Android P, let alone the upcoming Q.

At the end of it all, the Rokit IO Pro 3D is a misleading phone in how it is the hook to the life and health services it provides. There is no doubt that the noble idea of more accessible healthcare is a positive one, and it makes sense to bundle these services with an affordable smartphone that gives you access to them all.

The misstep is hooking consumers in with a 3D gimmick that makes the display demonstrably worse for 2D viewing (which you’ll be doing the majority of the time). Even with Rokit’s founders bringing on board original content makers and Hollywood studio execs to build 3D content, this is not a platform that is likely to grow.

Remember, this does not make Netflix content display in 3D. In fact, watching Netflix on this phone will not look good because of the display issues.

In the US in particular, this phone represents a way into more affordable healthcare options for those who are in need. That is commendable.

It is a great reason to buy this otherwise seemingly gimmicky 3D phone. And that is a shame.

We hope the message of positive social change comes to the forefront of Rokit’s confusing marketing stance that currently pins its hopes on a 3D technology which is far from mainstream.