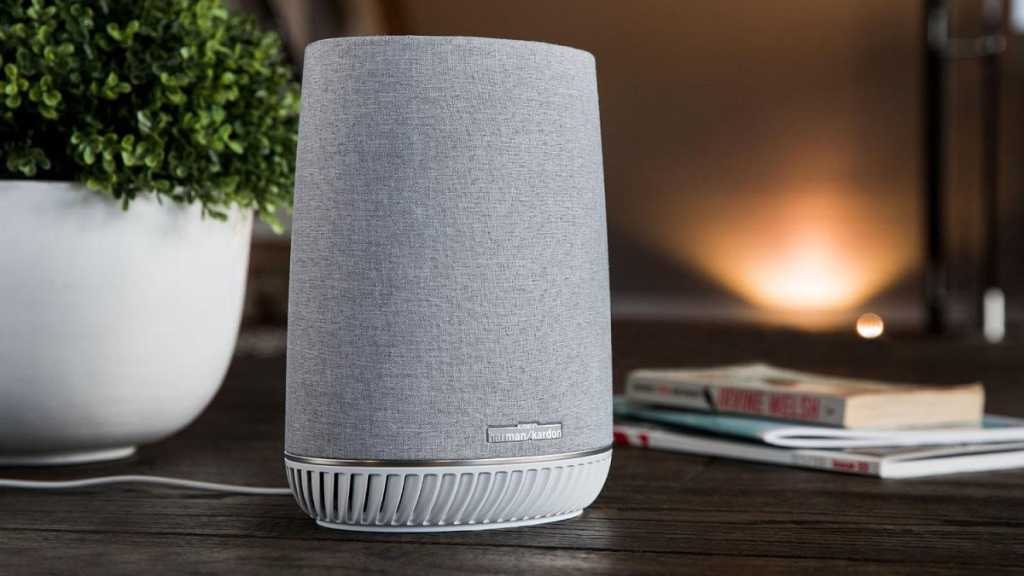 This kit is expensive but you get a lot for your money. For starters, this is one of the fastest mesh networks we’ve tested and the app makes it easy for users to get up and running. The headline feature here is the inclusion of an Alexa-powered smart speaker which makes the Orbi Voice a unique purchase and one we really like the idea of.

The great success of Amazon’s Echo range of speakers has meant that voice technology is becoming increasingly common in the modern connected home. This new technology is finding its way into other types of products too, with multi-room speaker systems and ‘smart screens’ from many other manufacturers now adopting Alexa or the rival Google Assistant. And now Netgear has got in on the act with the latest addition to its range of mesh networking kits, the aptly named Orbi Voice so here’s our full review.

Like most mesh routers, the Orbi Voice system consists of a kit that contains two routers, which can be placed in different rooms or locations and linked together in order to provide a wider and more reliable Wi-Fi signal than you would normally get from a single conventional router.

But, in this case, one of the routers also has a smart-speaker built into it, allowing you to listen to music and use Alexa voice commands as well as simply boosting your Wi-Fi network. But, like most of its mesh rivals, the Orbi router does not include a modem, so you do still need to connect it to your existing modem or router in order to use your broadband Internet connection.

The two-piece Orbi kit that we test here is officially called the Orbi Mesh WiFi System With Orbi Voice Smart Speaker (although you could opt for the shorter model number ‘RBK50V’). It includes one of Netgear’s standard Orbi mesh routers, which acts as the ‘primary’ router that you connect to your existing modem or router.

The second part of the kit is the Orbi Voice itself, which acts as a ‘satellite’ that you can place in another room in order to extend the reach of your new mesh network – as well as listening to music and using Alexa voice commands.

That two-piece kit costs £429/$429, which certainly makes it one of the more expensive mesh networking systems on offer at the moment. But, of course, there really isn’t anything comparable to the Orbi Voice that combines high-performance tri-band networking with a built-in speaker and Alexa voice technology so you’re getting a lot for your money.

It is possible to buy the Orbi Voice satellite unit on its own for £279/$299, but this can only be used as an extension for an existing Orbi network and won’t work as a standalone router by itself.

In the UK you can buy it from retailers like Amazon and Ebuyer. Meanwhile, in the US it’s available from the likes of BestBuy, Amazon and Newegg.

As we’ve mentioned, the ‘primary’ router in the Orbi kit is one of Netgear’s original Orbi mesh routers, which is very much a high-end device that provides tri-band 802.11ac Wi-Fi on the 2.4GHz and 5GHz bandwidths. It also includes six internal aerials that support MU-MIMO (multi-user, multiple input, multiple output) in order to transmit data to multiple devices simultaneously.

The primary router includes four Gigabit Ethernet ports for high-speed wired connections, although one of these ports is required for connection to your existing modem or router. There’s also a USB port for sharing a printer on your home network ,although Netgear doesn’t officially support the use of USB hard drives with the Orbi.

But, of course, the Orbi routers have been around since 2016, and it’s the new Orbi Voice satellite that makes this new kit stand out from the crowd. Designed in conjunction with Harmon Kardon – which does have a pretty good reputation for its range of computer speakers – the Orbi Voice looks very much like a conventional speaker, rather than a Wi-Fi router.

Wrapped up in a tasteful grey fabric cover, the Orbi Voice stands just 220mm high, 170mm wide and 120mm deep, so it will fit easily onto a shelf in any room within your home. But look at the back panel and you’ll see a pair of Gigabit Ethernet ports that provide wired connections for devices such as a games console or a smart-TV, along with a ‘Sync’ button that connects the Orbi Voice to the primary router elsewhere in your home.

The app does have a few rough edges, though. It has an annoying tendency to leave you hanging with a message that “this might take a minute or two” – and in fact, there were occasions when the app took so long to respond that we thought it had crashed, so a bit more feedback from the app here would be helpful.

We were also confused by the app at first, as its ‘dashboard’ interface couldn’t fit all its features onto the screen of either our smartphone or our larger 10in tablet. However, there was no scrollbar or any other visual indicator on the screen to help us find those features that were hidden off-screen.

The app does have some useful features, though, such as a network map that shows all the devices connected to your network, along with a speed-test and traffic-meter to help you monitor network performance.

There are also options for remote management when you’re away from home, setting up a guest network, and temporarily disconnecting individual devices when you need to get the kids to put down their smartphones and come to the dinner table. However, Netgear passes the buck when it comes to more extensive parental controls.

The Netgear website says that the Orbi kit “has Circle on Netgear parental controls”, but Circle is actually an independent, third-party parental control service that requires you to download a separate app. The Circle app does provide some basic filtering and monitoring features for free, but you need to pay a monthly subscription of $4.99 in order to use its full range of parental control features – which is disappointing given the high price of the Orbi routers.

And while the Orbi app is easy to use for newcomers who simply want to get their new network up and running as quickly as possible, it doesn’t provide many more advanced features for people who might want greater control over their network settings.

It is possible to configure the Orbi network through a more detailed web browser interface, but we had to spend some time searching around the help files on Netgear’s web site simply to find out if this were possible, so the app could provide more detailed information for advanced users who want those extra controls.

The Orbi app may have been a little frustrating at times, but you won’t be frustrated by the speed of your new Orbi network. It’s expensive, of course, but the Orbi’s tri-band Wi-Fi outgunned our normal network set-up with no trouble at all. Devices in the same room as our normal router can generally get pretty good speeds of around 490Mbps, but the new Orbi network breezed ahead, smoothly cruising along at 665Mbps.

But the real test is our back office, where our Wi-Fi speed normally drops below 100Mbps. But, with the Orbi Voice satellite set up in that office we were able to boost the Wi-Fi speed to an impressive 510Mbps – making it one of the fastest mesh systems we’ve reviewed so far.

And, of course, the Orbi Voice also doubles up as a speaker too. This side of things is a bit of a mixed bag, though. The speaker itself works very well, with a clear, detailed sound that does a good job even with the low-bandwidth streaming audio used by services such as Spotify.

The bass could be a little firmer, but that’s a common weakness with compact speakers such as this, and the Orbi Voice is more than powerful enough to listen to music in a bedroom, or maybe even for extending your network out into the garden so that you can liven up a BBQ with some music when the summer finally comes around again.

And, of course, the speaker also includes an array of four separate microphones so that it can listen out for your voice commands. Once you’ve entered the details of your Amazon Account, the Orbi Voice works just like one of Amazon’s Echo speakers, allowing you to ask Alexa for the weather report, or cricket scores.

You can even use Alexa to control your network, with commands such as – “Alexa, ask Netgear to enable the guest network” – when you have friends over for that BBQ.

But, rather oddly for a device that includes both a speaker and a router, the Orbi Voice doesn’t have every service available. It can only be used to play music from a handful of streaming services, including Spotify, Deezer and – of course – Amazon Music. But there’s no support for things like Apple Music, or my own personal Tidal account.

The Orbi Voice doesn’t include Bluetooth streaming either, so there’s no way of playing music that you might have stored on a computer, smartphone or tablet. Those limitations could be a deal-breaker for some people, so you should check Netgear’s web site to see if it supports the music services that you like to use the most.

It’s expensive, but we can’t fault the high-speed Wi-Fi performance and mesh networking features of the Orbi Voice system. It’s one of the fastest mesh systems we’ve tested.

The price also includes a smart speaker which works well too, and is a good option if you have an account with services like Spotify or Amazon Music.

Just be aware that the lack of Bluetooth means that it’s not much use for other services, or for playing music that you actually own and store on your own devices at home.