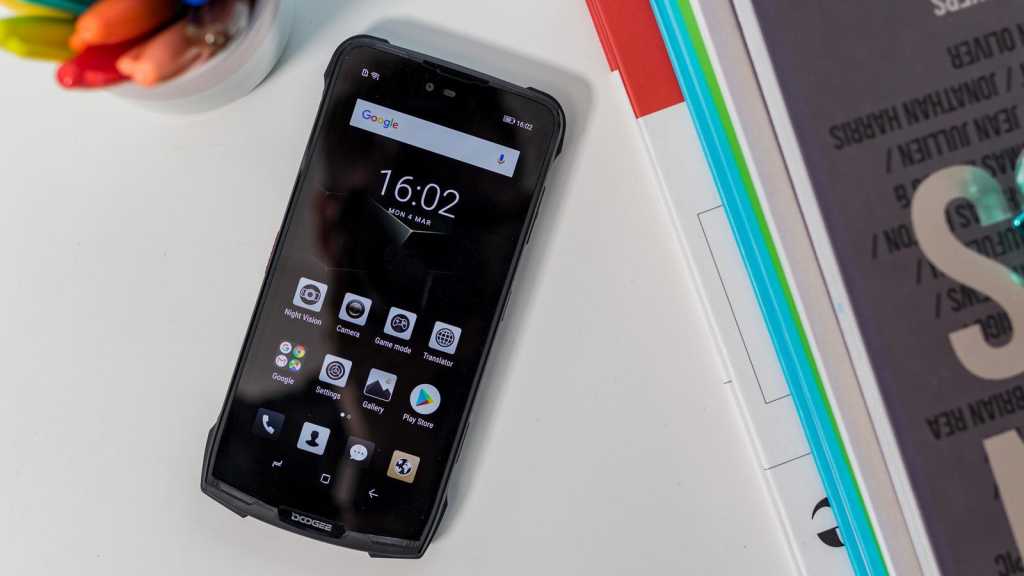 Potentially one of the first 5G rugged phones, and the first to feature a modular design, the Doogee S90 is certainly interesting. It offers very good value for money and a decent mid-range spec, and it’s as tough as phones come in 2019. But the mods are not as exciting as we had hoped, and the S90 itself is rather big and bulky.

The best rugged phones typically follow the same blueprint, with some mid-range hardware, a high-capacity battery and a tough design that meets the top industry specs for durability and waterproofing. Doogee’s S90 stands out for its ability to clip on modular accessories, which include an extra battery pack, a night-vision camera, a walkie-talkie and a gamepad. A 5G mod will also be made available for the S90, making this the first 5G rugged phone (see more 5G phones coming soon).

In truth we’re not sure how much use you’ll get out of these accessories, and they are not included in the box as standard. The S90 is also already a rather large handset, so adding things on to it just makes it more unwieldy. But if you have use for these extras, it’s certainly worth a look over rival rugged phones such as the same-spec Ulefone Armor 6. It’s cheaper, too…

Where to buy Doogee S90

For UK customers the best place to buy Doogee S90 is via Amazon, where it costs £369.99. But of all the modular accessories this package includes only the battery pack, and as far as we can tell you cannot purchase the other add-ons separately (at least not yet – it’s still a fairly new product).

If you want a bundle that includes the other modular accessories you’ll need to import the phone from China via Banggood. Prices are cheaper, but do not include import duty, which is payable at 20% of the value printed on the shipping paperwork.

Bangood currently stocks the following options (prices correct at the time of writing):

Our review sample came as part of the Super Bundle, which does not include the gamepad. We have not been able to find a stockist of this accessory.

How tough is the Doogee S90?

You won’t buy this phone unless you are specifically after something tough that can stand up to a lot more than the wear and tear of daily life. The Doogee S90 is a big and heavy device, some 14.1mm thick and 300g in weight (that’s without the mods).

It’s immediately recognisable as a tough phone, thanks to its rubberised edge protection and overall surplus of casing materials around the body. There’s also the kind of cool hexagonal design on the rear that you see only on rugged phones, going some way to aid grip.

The Full-HD+ IPS display is large at 6.18in, and Doogee has made an attempt to prevent this making the phone too big to handle (and bringing it into line with current smartphone trends) by adding a wide screen notch for the 8Mp selfie camera and adopting a 18.7:9 tall aspect ratio. But while the bezels are slimmer than on many tough phones they are still reasonably chunky, which is necessary given that most damage to phone screens occurs at the edges.

It’s also added a plastic lip that runs all around the edge of the display to protect it from damage when falling face-down, because even though it supports Gorilla Glass 4 (the latest is Gorilla Glass 6) and Doogee claims it is shatterproof, the S90’s display is not infallible. This, combined with the thick casing, makes the Doogee 90 feel significantly larger than other phones with a similar screen size, but also much tougher.

The S90 adheres to MIL-STD-810G and both IP68 and IP69K standards. It will withstand submersion in water up to 1.5m for up to two weeks, and can handle high-pressure and high-temperature water jets, too. It is also shockproof, dustproof, and protected from extreme temperatures, humidity, mould and corrosion.

Water is prevented from seeping into the ports by rubber flaps. We’re not fans of these, but have to say on the S90 they are much less fiddly than on other rugged phones. While you might often struggle to get the flap out the way in order to insert a USB-C cable for charging, there is plenty of room here. There’s another flap on the left edge protecting the SIM slot, though there are no other ports to protect with audio handled via USB-C rather than a 3.5mm audio jack (an adaptor is supplied).

The most obvious weak spot in our opinion is the rear camera assembly, a dual-lens model that not only juts out but appears to be protected simply with plastic. We can see this becoming scratched or smashed without too much effort.

As is often the case with rugged phones, Doogee has made some assumptions about the type of people who are likely to want to use it. Top of that list is manual labourers (and, to be fair, those I know do get through more phones than the average person). To this end there’s a ToolBag app that includes a Compass, Sound Meter, Pic Hanging, Gradienter, Height Measure, Magnifier, Protractor, Plumb Bob and Barometer.

For adventurers there’s also a custom button on the left edge that can be used to launch SOS or the flashlight, or if you have no need for that it can alternatively launch an app of your choice or take a screenshot. By default it doesn’t actually do anything.

As tough phones go the Doogee S90 isn’t bad-looking, but it clearly places functionality over aesthetics in terms of priorities. We’d like to see the addition of a notification light and protection from fingerprints in a future model.

The Doogee S90’s various modular accessories clip magnetically on to the rear. The action is pretty smooth, and once attached they remain firmly in place without becoming too difficult to prise away.

They do add significant weight and width to the phone, however, so they are not the kind of thing you’ll be leaving attached unless you really need to use them. Fortunately the Super Bundle comes with a neat carry case for transporting these accessories around.

The extra battery pack is a nice idea, taking what was already a big-battery phone up from 5,050mAh to 10,050mAh. No-one needs this amount of power in an average day, but if you’re after this phone because you’re going to be away from home (and potentially civilisation) it’s good to know it can keep going several days on end. You should easily achieve two days without the battery pack, and you can double that with it.

One thing you should note is that although the Doogee S90 supports wireless charging (at 10W), the battery pack does not. A USB-C port on the side of the accessory lets you charge it independently of the phone if this is easier, and a button on its rear ensures that power is sapped only when it is needed.

We could point out that it’s just as easy to use the S90 with a power bank, but the mod is potentially more convenient.

We also tested the night-vision camera, which is not quite what you might expect. When most people talk about night-vision they think about being able to see in the dark. Really this camera simply allows the Doogee to take better low-light (not pitch-black) photos, though it is only a 2Mp Sony IMX291 sensor that amplifies light by a factor of 12.

You can see the difference in our standard low-light scene below when using the main 16Mp + 8Mp dual-lens Samsung AI camera (left) and the night-vision camera mod (right). Without the mod the Doogee S90 fails miserably in low-light photography; with the mod it does a better job of lighting the scene but there is a lot of noise visible in the shot – and it’s still not the best low-light shot we’ve seen from a phone camera.

Noise is also a problem in daylight, of course. Though the colouring is pretty good and the images are sharp enough, photos taken by the dual-lens camera in good lighting also appear rather grainy. (Shown below in Auto and HDR modes).

We don’t personally have any use for the walkie-talkie mod, but for those who do it is able to cover 400-480MHz frequencies.

As we noted earlier the gamepad was not supplied with our review sample. It is said to include an ultra-responsive joystick and zero-delay buttons for enhancing the gaming experience on a phone.

It’s rare for a rugged phone to come with a flagship specification. The AGM X3 is the closest we’ve seen in this regard, but even that phone comes with last year’s Snapdragon 845 processor.

In common with the Ulefone Armor 6 the S90 runs a MediaTek Helio P60 processor, which is a 12nm octa-core chip clocked at 2GHz and integrated with the 800MHz Mali-G72 MP3 GPU. It’s paired with 6GB of RAM and 128GB of storage (expandable up to 256GB through microSD). Typically speaking, this is about as good as it gets in this market.

Also in common with the Armor we weren’t able to run our usual Geekbench 4 benchmark, so it’s possible that it’s the processor that’s not playing nicely with the test. Once again we turned to AnTuTu instead, where we recorded 131405 points against the Ulefone’s higher 137457. Both are middling scores and in the same sort of league as the Huawei Mate 20 Lite (139004), Honor 8X (139672), Asus Zenfone 5 (138397) and Samsung Galaxy A9 (140478). Most users will find the performance sufficiently capable for daily tasks.

In graphics tests both phones produced a playable 34fps in GFXBench T-Rex, moving down to 19fps in Manhattan, 11fps in Manhattan 3.1 (12fps for the Ulefone) and 7fps in Car Chase.

The Doogee fared ever so slightly better in the JetStream Java benchmark, recording 51.5 against the Ulefone’s 45.5 (higher is better).

Other features of note in the Doogee S90 include dual-SIM dual-standby support (at the expense of microSD), 802.11ac Wi-Fi, Bluetooth, GPS, NFC and USB OTG. There’s also a fingerprint sensor on the rear.

The software is old Android 8.1 Oreo, but with Doogee’s own interface overlaid. You’ll notice the app tray has been removed and some apps have been added, but aside from this it looks a lot like standard Android with a theme applied. We prefer the look of stock Android, but there’s nothing wrong with what is offered here.

The Doogee S90 is one of the better rugged phones on the market in terms of features and value, and it’s as tough as they come. It’s also pretty interesting with its modular design, and for the fact it will be one of the first rugged phones to support 5G (presuming this mod will be easily obtainable). But if you don’t think you’ll take advantage of the mods, the less bulky and better-looking Ulefone Armor 6 is worth consideration.