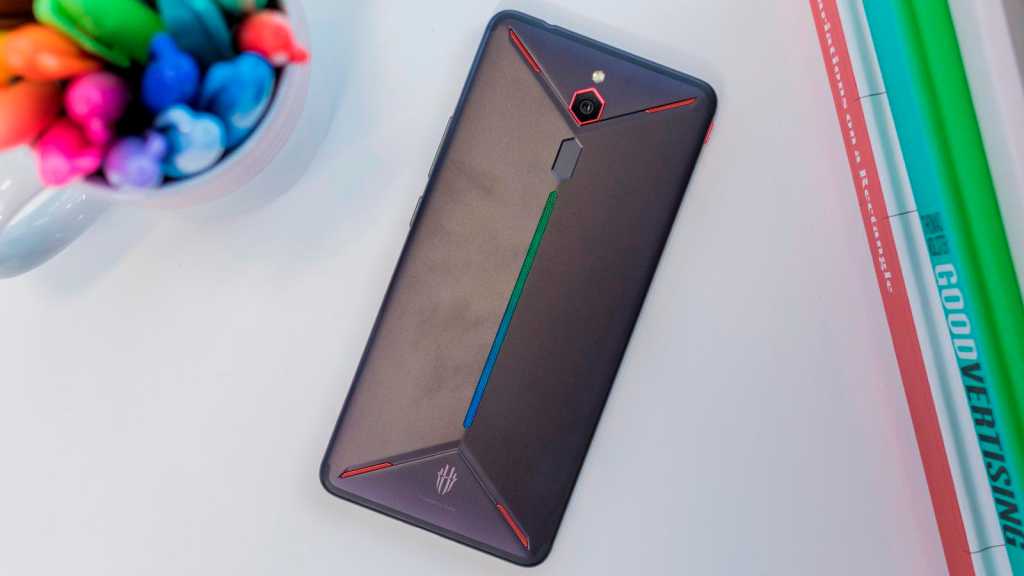 Since the reveal of the Razer Phone back in 2017, gaming smartphones of all shapes and sizes have appeared on the market. All offer something slightly different, be it an improved refresh rate, high-end internals or in the case of the Red Magic Mars, built-in triggers to enhance mobile gameplay. The Red Magic Mars also much cheaper than rivals, starting at only £359/$399, but does it offer the same high-end mobile gaming experience?

We’ve spent a lot of time gaming and browsing on the Red Magic Mars, and here’s our game-tastic review.

The Red Magic Mars is now available to buy in the UK and US following a February 2019 release. The good news is that it’s more attractively priced than other gaming phones, which can cost upwards of £600/$600.

If you’re interested in buying the Red Magic Mars, you can do so from the Red Magic website. We imagine it’ll be available via other retailers soon, and we’ll update this section if/when that’s the case.

You need only take a glance at the Red Magic Mars to work out the kind of person it’s geared towards – but that’s not necessarily a bad thing, as the likes of the Xiaomi Black Shark have proved in the past. It’s a gaming phone marketed at gamers, and while it’s not quite as svelte as some 2019 flagships, it’s certainly a solid smartphone with a lot to offer. 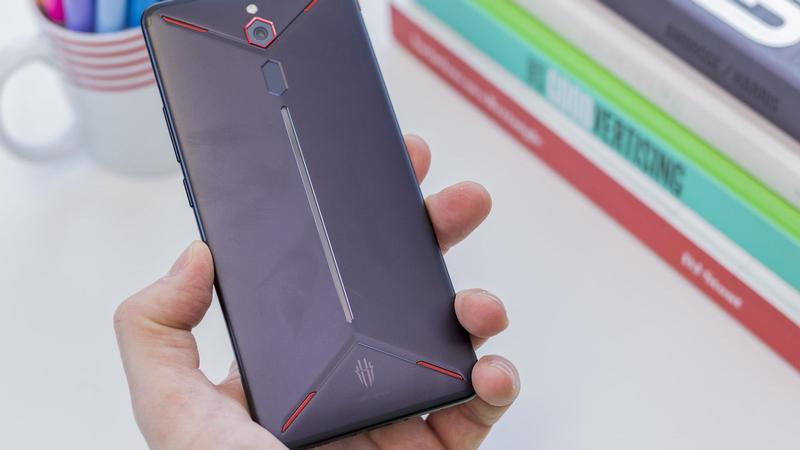 The Red Magic Mars measures in at a slightly chunky 158.2 x 75 x 9.9mm and weighs 185g, boasting an aluminium alloy body that delivers the high-end feel the company is going for. Our review sample is largely black with red accents found on the air vents and the rear camera surround, but the smartphone is also available in a bright red and camouflage – yes, you read that right, camouflage.

Of course, it wouldn’t be a gaming smartphone without some kind of RGB light show, and the Red Mars Magic doesn’t disappoint in that department either.

On the rear of the device you’ll find an RGB strip capable of displaying 16.8 million colours and several lighting effects that’ll make your smartphone stand out when gaming. It’s not always-on like the RGB-enabled Razer Phone 2, but it can be used to alert you to incoming notifications when the phone is screen-down on a table as well as look cool when you’re gaming.

Our one criticism of the RGB system isn’t that it’s gimmicky – we’ll leave that for you to decide – but the fact that it’s too dim to be noticeable in most environments. In a well-lit room you’d struggle to make out anything more than a subtle colour change, although it’s much more noticeable in a darkened environment. 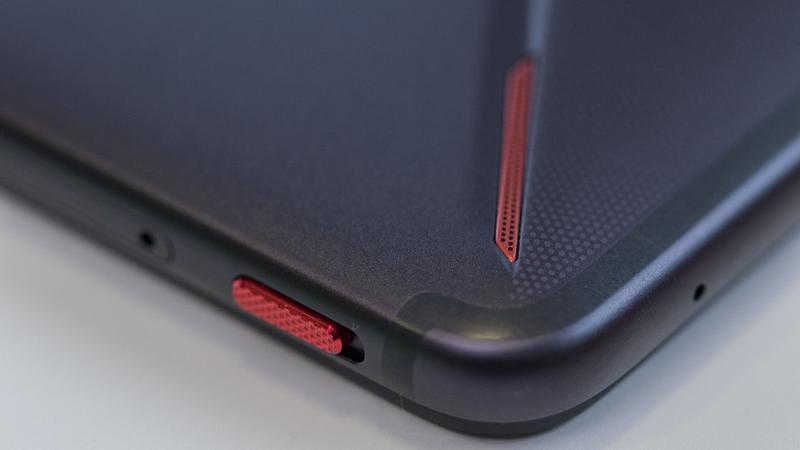 You’ll find a GameBoost switch on the top-right side of the Red Magic Mars that takes you to a dedicated game space. This is where you’ll be able to easily browse your collection of Android games and enjoy them not only with Game Acceleration enabled for better graphical performance, but 4D vibration and touch-sensitive triggers that, when combined, provide a truly high-end mobile gaming experience.

The touch-sensitive triggers are, arguably, the Red Magic Mars’ top feature, providing a more familiar way to interact with mobile games that isn’t only more comfortable, but improves performance too. Take PUBG Mobile for example; you can set the triggers to aim and fire, leaving more screen real estate free for other buttons and controls that you may need to secure the coveted Chicken Dinner.

The best part is that the controls are programmed via an overlay on a per-game basis, making it compatible with pretty much any game on Google Play from day one. It really does enhance the overall mobile gaming experience, allowing for quicker, more accurate input without having to carry a separate controller accessory like with the Asus ROG Phone and Xiaomi Black Shark. 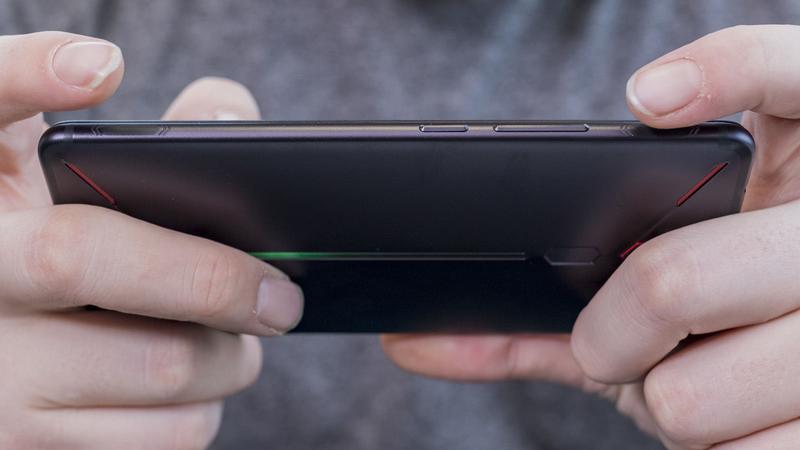 The experience is further enhanced by 4D vibration, which boasts over 1000 vibration patterns that can indicate anything from explosions to gunfire to footsteps, allowing you to feel as well as hear enemy players around you. While it really is a phenomenal feature, the downside is that it’s limited to a handful of games at the moment (PUGB Mobile being the main one) and we’re not sure how many other games will get support in future.

A gaming smartphone… with a 60Hz display?

On the front of device, you’ll find a 6in FHD+ 18:9 display with a resolution of 1080 x 2160, equating to around 403ppi – fairly standard stuff in 2019. And while it’s not bezel-less like other smartphones, the Magic Mars has thin bezels that stop the phone from becoming wide and unwieldy when used one-handed.

Most importantly, the display is crisp and vibrant with fairly accurate colour reproduction – you won’t find crazy over-saturated visuals here, making it ideal not only for gaming but watching YouTube and Netflix too. It’s just about bright enough for use in direct sunlight, but only when you crank it past 70 percent brightness – although we think this is something that could be fixed in a software update.

The only real issue with the Red Magic Mars is that the display is capped at 60Hz. While this would be fine for a standard smartphone, gamers have come to expect higher refresh rates not only when playing on PC, but mobile too. Both the Razer Phone 2 and Asus ROG Phone boast variable refresh rates up to 120Hz, allowing gamers to achieve higher frame rates and better response when playing mobile games, and the difference is noticeable.

It’s certainly on our wish list for the Red Magic Mars 2, anyway! 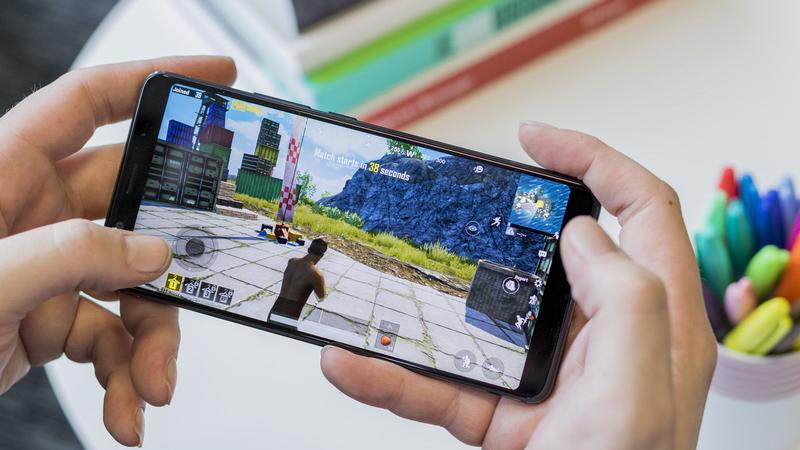 With such a focus on performance, it shouldn’t come as a surprise that the Red Magic Mars boasts an octa-core Qualcomm Snapdragon 845 alongside an Adreno 630 GPU and either 6, 8 or a whopping 10GB of RAM, depending on the model you opt for. It’s the same story for storage; the base model comes with 64GB, but that jumps up to 128- and 256GB for the mid- and top-spec models respectively.

Admittedly the processor isn’t the fastest on the market, as Qualcomm’s upgraded Snapdragon 855 is now appearing in smartphones, but it’s still more than enough to provide a solid gaming experience with no lag or performance issues.

That’s thanks in part to a hybrid cooling system that features not only passive airflow but a vapour heatsink and a chassis that dissipates heat very well. While that may not sound like much to you at home, it should help keep the processor cool and in turn, provide smooth and stable gameplay during intense gaming sessions.

Essentially, the Red Magic Mars provides quick performance both when gaming and when generally using the phone to browse social media and surf the web, with not a hint of lag or screen tearing to be seen. This is backed up by our benchmark results, which puts the Red Magic Mars on a par with the Asus ROG Phone, Razer Phone 2 and Huawei’s Mate 20 X.

For reference, we benchmarked the mid-range 128GB/8GB RAM variant of the Red Magic Mars, so performance could vary slightly depending on the model you opt for.

There’s some serious power in the battery department too, boasting a 3,800mAh battery that is more than enough to power the internals and get you through those intense gameplay sessions. We found that it’d comfortably get through the day with a bit of casual gaming, although that could drop if you intend to play mobile games for hours on end. It scored 6 hours and 11 minutes in our benchmark, and while it’s not ground-breaking, it’s in-line with the likes of the Asus ROG Phone.

The good news is that when it does come to charging, the Red Magic Mars offers Fast Charge 3.0 support, up to 18W. Admittedly it’s not as powerful as the 40W fast charger bundled with the Huawei Mate 20 Pro, but it should still provide a speedy charging experience.

While the Red Magic Mars provides a superb mobile gaming experience, it comes up short in the camera department – and while that’s a disappointment, it’s a recurring theme amongst gaming smartphones. It’s like manufacturers believe that gamers don’t care about taking photos and videos, and that’s definitely not the case.

Anyway, we digress; the Red Magic Mars sports a single 16Mp camera on the rear of the smartphone, along with an LED flash and a PDAF focusing system. The focusing system works well in brightly lit, outdoor environments but struggles to maintain focus in dimmer (but not dark) environments, resulting in a lot of soft, blurry photos.

If the stars align and you take a photo in a well-lit environment, you can capture great-looking images, but zooming in reveals an over-aggressive noise cancellation algorithm at play. That’s not surprising from a smartphone, but it’s certainly more noticeable than other smartphones we’ve reviewed. 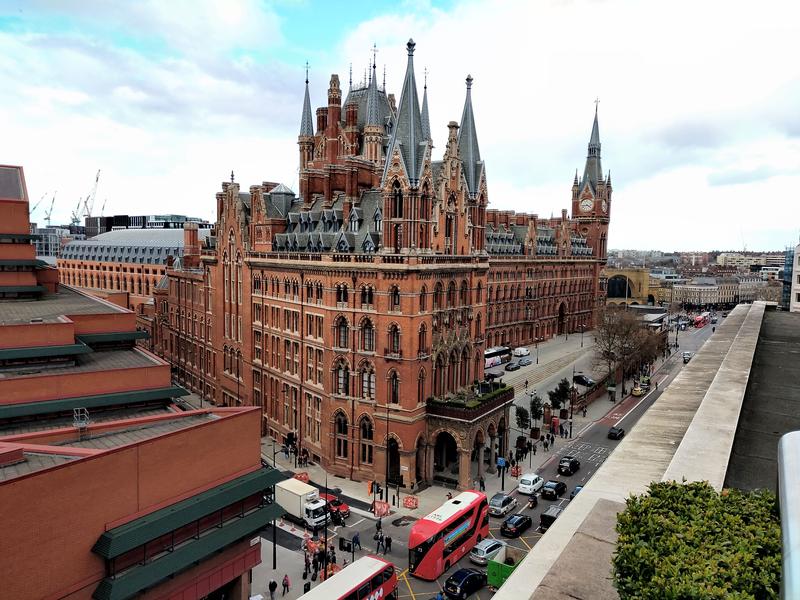 The rear-facing camera also boasts 4K@30fps video capabilities, along with 1080p@60fps, but with no EIS or OIS present videos captured are often shaky – even when trying to keep the phone as steady as possible. 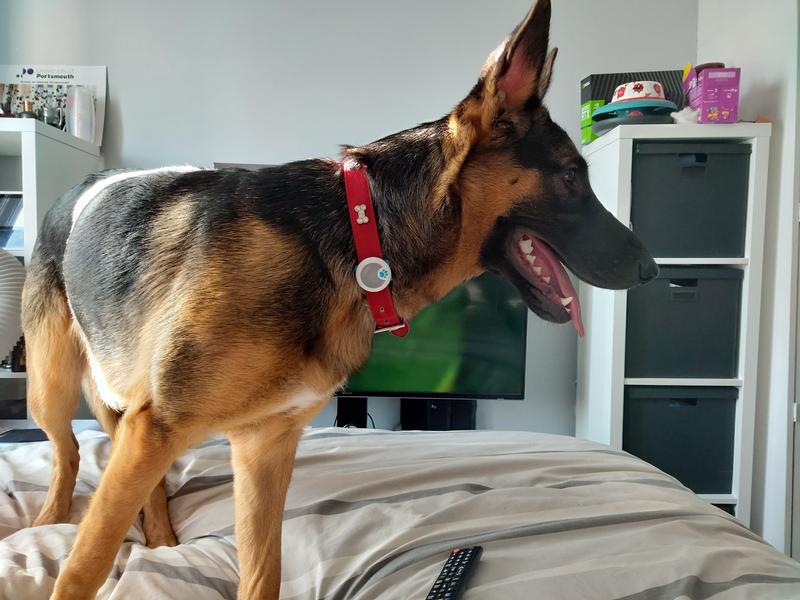 The 8Mp front-facing camera produces images that are clear and more than enough for Snapchat, Instagram and Skyping friends, but there’s nothing on offer that makes it stand out.

Another bugbear we have is with the camera app itself; you can choose between 18:9, 4:3 and 1:1 aspect ratios, but if you select anything other than 18:9, the camera preview drops to the bottom of the display, with shooting buttons overlaid onto the preview while leaving a large black space at the top of the display. 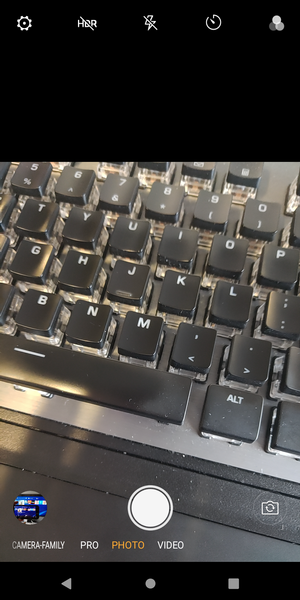 It’s weird-looking, and looks to be a poor decision on Red’s behalf, but it’s also something that’s easily fixed with a software update – and we hope that happens sooner rather than later.

The Red Magic Mars runs Android 9.0, and while it looks stock, it’s actually running Nubia’s Red Magic UI – you didn’t think a dedicated game space was a general Android feature, did you? The good news is that for the most part, it is stock Android, with no weird UI changes to get used to.

The downside is that it’s still a little rough around the edges, namely in terms of the language used across the OS. You’ll likely come across slightly off translations, like the ‘off’ button in the Camera settings menu that should actually say ‘back’, but that shouldn’t have a knock-on effect on performance.

Again, it’s something that can be fixed via a software update, and we hope that happens soon – especially when you consider it’s on sale in the UK and other English-speaking countries right now. 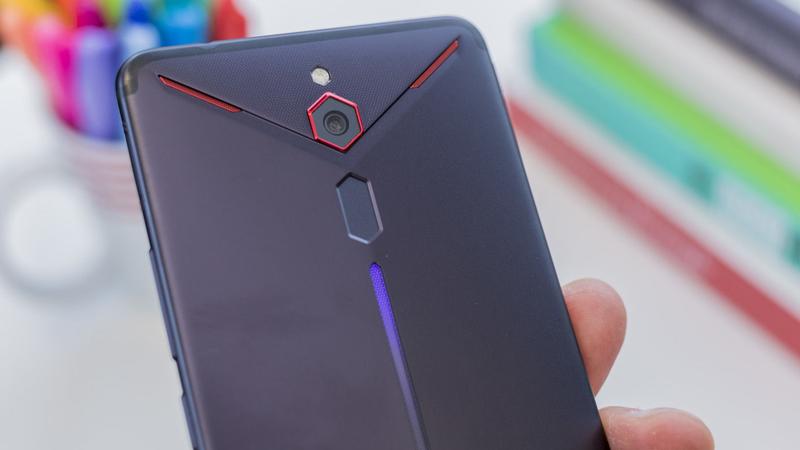 Other specs of note

The Red Magic Mars is a powerhouse of connectivity, offering a USB-C port alongside a headphone jack, MIMO-enabled Wi-Fi, Bluetooth 5.0 and support for four GPS systems; GPS, GLONASS, BelDou and Galileo, which provides accurate location services no matter your environment.

Oh, and there’s a rear-facing diamond-shaped fingerprint scanner embedded beneath the camera. It’s quick, although performance is a little bit spotty if your fingers are wet.

The smartphone also boasts dual-SIM support, but it’s dual-standby and not dual-active, so you’ll only be able to use one number at a time. Still, it’s a great option to have if you work across multiple SIM cards or time zones.

It might not have the most up-to-date specs, but the Red Magic Mars provides a great mobile gaming experience. The display is bright and crisp, it’s powerful enough to run the likes of PUBG Mobile on Ultra settings with no lag or screen tearing, and the built-in customisable trigger buttons really do give the edge when gaming on the small screen.

It’s not perfect; the cameras are underwhelming, and the software needs tweaking, but it’s still a tempting option at half the price of leading gaming-focused smartphones.