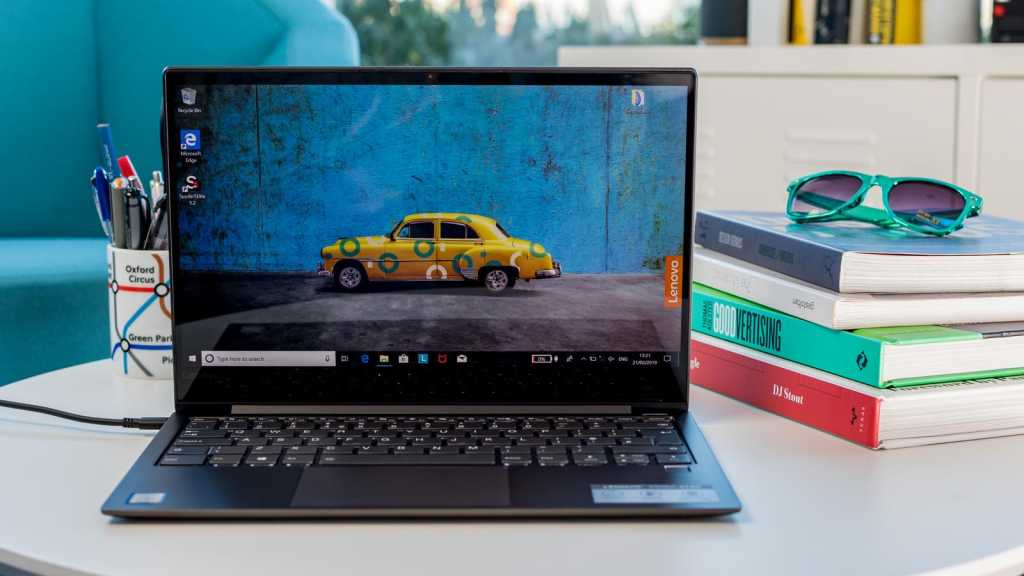 The Yoga S730 is a solid mid-range laptop if you can’t afford the flare of the Dell XPS 13. It’s light, respectably powerful, sleek looking and an ideal travel companion for basic computing but the unimpressive battery life and lack of a USB-A port stop it getting full marks.

The Yoga series is doing its best to change your perception of Lenovo devices, moving away from the bulky ThinkPads towards something much more sleek and stylish. The Yoga S730 is a product of this philosophy borrowing fairly (extremely) heavily from Dell’s XPS playbook to position itself against the market leader and other notable competitors such as the HP Envy.

The Yoga series was first introduced to us back in 2012 but has become steadily more complicated since then, with the ‘S’ model name being its flagship laptop range, ‘D’ being reserved for its 2-in-1s and ‘C’ referring to its convertibles.

We first saw the S730 back at CES 2019 as one of several Lenovo devices on offer, we were certainly impressed and we’ve managed to the S730 into our lab for a closer look – so without further delay, lets drive in.

You’ll only be getting a 1920×1080 Full HD display no matter which version you get, so do keep that in mind.

Lenovo appears to be pricing the Yoga S730 as a plucky XPS 13 alternative with the standard undercutting tactic of roughly 90 percent of the features and performance at 70 percent of the price. It’s going to have to do some work to come close to the Dell’s 2019 XPS 13 though, which we very much approved of in our review.

Make sure you stay up to date with our take on the very best laptops you can buy right now.

The Yoga S730 is available in a platinum or iron grey aesthetic – aiming for the sleek, stylish and minimalistic look so common among laptops these days and pulling it off very nicely indeed.

The device is incredibly thin at 11.9mm, so much so it almost looks flimsy and could feel frail in the hand but the case and exterior feel surprisingly sturdy thanks to the aluminium construction – after handling it and using it for a few days, I got used to something so small and thin being remarkably sturdy and well made.

The dimensions are as follows:

The drop-down hinge that attaches the display to the device has been designed by Lenovo in-house and feels very impressive. The laptop can be opened with one hand and we found very little screen wobble when doing this, which is great to see. It can also open to almost a 180-degree angle which is pretty rare, and allows the laptop to be used in a wide variety of positions which is always useful.

The device has obviously been made with portability in mind and feels like a premium product without a doubt, both looking and feeling the part while being easy to move around in the hands or in a laptop bag on the go.

The keyboard is nicely arranged on the body and surprisingly well sized, making it feel somewhat less cramped and restrictive than what you may expect from a laptop of this size.

The keys are two-stage backlit, are rounded and have a soft finish with a respectable amount of travel making it very pleasant to type on. Some keyboards in this particular class of laptops feel thin and harsh to type on, but this one is pleasant to use all around.

This is the first Yoga to not have a touchscreen and active pen support which means that the trackpad is the only device that allows interaction with the mouse – luckily it does a great job at this. The touchpad itself is made from glass and at 105 x 70mm is, like the keyboard, a great size for a device of this scale.

The trackpad is both accurate and receptive of all gestures and generally a pleasure to use – we didn’t encounter any of the issues that would usually come with cheaper built devices. The usual test of trackpads is if you don’t have much to say, it’s doing its job correctly – it’s a thankless role but an oh-so-important one.

The display for the Yoga S730 is a 13.3in Full HD IPS screen and sadly this is the only option for this device – so you won’t be able to get a 4K screen which confirms the laptop as a mid-range device.

The display holds a pixel density of 165ppi which is fairly standard for a device in this price range and the screen also reaches a reasonable if not amazing level of brightness at 290 cd/m2 – however the glossy finish that is present on this display does make it difficult to view when outside due to the amount of light it reflects, so do keep that in mind.

You’re going to be seeing roughly the same spec sheet for most laptops around this price point. These specs will handle the vast majority of everyday tasks with ease, and only some really strenuous number crunching tasks will cause this device any real problems.

Our review model came with the i7-8565U and 8GB of RAM and came back with the following results:

The results are roughly in-line with what we would expect, but one important thing to note is that this laptop does appear to suffer from some minor overheating issues. It’s nothing dangerous, but the fan is pretty fast to spool up and this will mean the processor’s performance is almost certainly being temperature throttled.

This isn’t the end of the world if you’re doing basic tasks, but if you’re looking to squeeze every last drop of performance out of this thing it is something to keep in mind – this sort of drawback is fairly common territory at with any of Intel’s latest generation processors at this price point.

On the graphics side, the S730 comes with an integrated Intel UHD Graphics 620 GPU which puts out a respectable amount of performance when coupled with the dual-channel RAM. However, this is not a gaming laptop and will be far outstripped by laptops with a dedicated GPU – such as the NVIDIA GeForce MX150 that you’ll find on Lenovo’s IdeaPad 720.

Lenovo promises 12 hours of life from the battery on the S730. We put this to the test by setting the screen brightness to 120cd/m2 (around 40 percent screen brightness) and running a 720p video on a loop until the laptop runs out of power.

This test resulted in the battery lasting nine hours and eight minutes which is fairly respectable but does come in below a lot of the competition in the super-portable laptop market. The 2019 XPS, for example, lasts over 11 hours without breaking a sweat.

The form-factor of these ultra-thin laptops is certainly having an effect on how long they can last, but it should still be enough to see you through a workday.

The largest point to keep in mind when looking at connectivity is the lack of any USB-A ports on the S730. The frame isn’t actually thick enough to house one properly – which is great news for the portability and handling of the device, but less welcome news for those of us who haven’t quite made the jump to USB-C yet.

You’ll find three USB-C ports on the laptop, two on the right side and one next to the headphone jack on the left side. The two right ports support DisplayPort and Thunderbolt 3 – while the single port on the left supports USB-PD (Power Delivery) which allows the device to be charged through a USB-C port.

You might not expect it at this price, but the S730 has a fingerprint scanner so you can log into Windows with ease.

The Yoga S730 is a solid device but we struggled to think of it as anything but a budget XPS 13, but really that’s a good thing.

It’s super light and respectively sturdy with a good quality display, a generous amount of USB-C ports and an impressive array of specs that will handle almost any daily task you can throw at it.

However, the battery life isn’t all that impressive and with no dedicated or external GPU option, USB-A ports or 4K screen option – the device lacks versatility and doesn’t step out of its box of a small, lightweight executive word-processing companion.