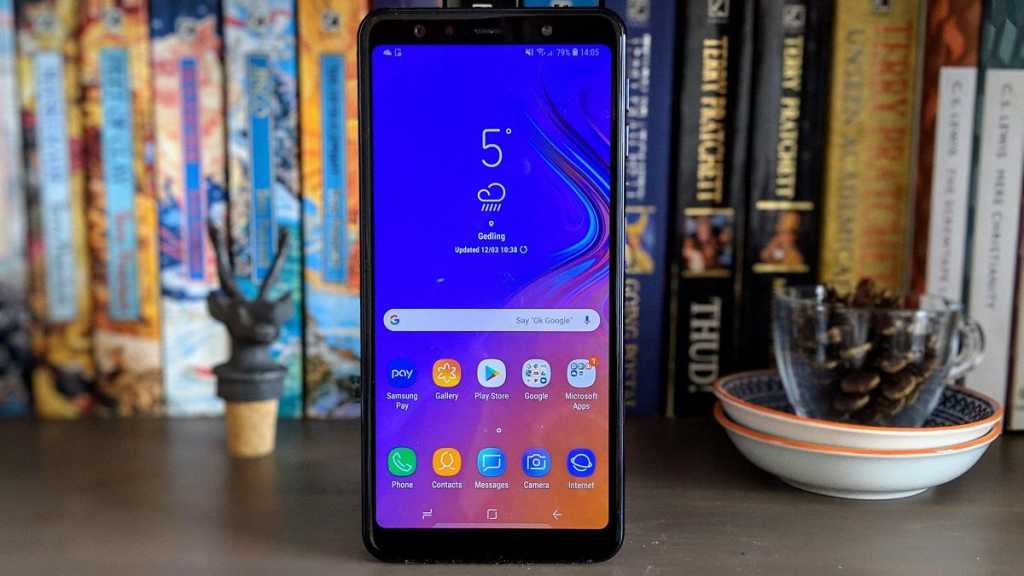 The Galaxy A7 is a decent choice for a mid-range phone if you’re looking to spend less than £300. Highlights include an excellent screen, nice design and cameras you’d wouldn’t expect to find. However, unless you’re going to use the wide-angle lens a lot there are some strong rivals out there like the Moto G7 Plus and Honor Play.

It might be from last year but the Galaxy A7 is an interesting mid-range phone for those that want Samsung style and features but can’t afford a flagship Galaxy S10. Here’s our full review.

The range is getting a little confusing as the model number has stayed the same over the last few years even though Samsung has launched the Galaxy A8 and A9. More recently it unveiled the Galaxy A30 and Galaxy A50 so there are a lot of mid-range Samsung devices to choose from.

Although some A range phones have been fairly expensive, like the £449 Galaxy A8, the Galaxy A7 (2018) is a lot more affordable.

It’s just £269 and you can buy it from Samsung or Carphone Warehouse. It’s even cheaper at Amazon starting at £229 currently. That puts it in the same region as the impressive Moto G7.

In the US, Samsung doesn’t list the A7 on its official site. However, you can buy it for around $300 on Amazon so a bit more but you get double the storage.

Check out the best mid-range phones.

A bit like the Moto G7 range, Samsung has given the A7 a bit of a mini-overhaul when it comes to design. It retains some styling but also looks pretty different to last year’s model.

Smaller bezels on the front along with a tall screen mean that the A7 for 2018 looks modern. The screen-to-body ratio of 74.4 percent isn’t anything amazing though – there’s still bezels at the top and bottom with the latter seeming unnecessary.

As per usual it means there’s no room for a fingerprint scanner/home button. This would normally go to the back but now sits in the power button on the side.

It’s very different to Samsung’s usual way of doing things but we like it. The button is satisfyingly recessed but has an annoying loud click when pressing it. Luckily you don’t have to click the butting when using the scanner to unlock the phone.

The handset is both thinner and lighter than previously at 7.5mm and 168g. The weight change is particularly welcome and is achieved partly by switching from an aluminium to a plastic frame. The downside is that is feels slightly less premium but there is a glass back so it’s not all plastic fantastic.

Another big downside is that Samsung has dropped the IP68 waterproof rating so you’ll need to be more careful with the device.

We’ve taken a look at the blue Galaxy A7 but you can also get it in black, gold and pink colours if any float your boat.

Like with most smartphones, the Galaxy A7 (2018) gets things like a larger screen and more cameras when compared to its predecessor. The most interesting thing here is that the phone is one of the cheapest on the market to come with triple rear cameras.

Let’s look at the cameras first since they are the standout feature here. There are no less than three on the back of the phone starting with a 24Mp sensor with an f/1.7 aperture. This is accompanied by an 8Mp (f/2.4) ultrawide angle and a 5Mp depth sensor.

That’s a very usual set up for a phone this cheap with rivals typically coming with just a regular sensor accompanied by a depth sensor.

Like most mid-range phones the cameras are pretty decent, but unsurprisingly lack the level of performance on offer from flagship devices – despite things looking good on paper.

The A7 can take some nice shots with good contrast, colour and detail. The wide-angle lens is handy when you simply can’t fit everything in the frame but the detail goes down so it’s a trade-off here.

Having a portrait mode is also useful and Live Focus means you can adjust the level of blur before or after you’ve taken the shot. It cuts the subject out very well in our tests. You’d think with an f/1.7 aperture that low light performance would be good but it’s not at the level we expected.

The front 24Mp camera offers great levels of detail but can do some odd things like a weird outline in HDR and a washed-out background in Selfie Focus (like Live Focus but without the help of another lens).
Optical image stabilisation isn’t present here unlike the G7 Plus and the A7 is limited to Full HD resolution video recording.

Large screens on phones is pretty normal now so a 6in display like the A7’s won’t feel quite so crazy thanks to smaller bezels. Although as we said in the design section, there are fairly big bezels above and below this screen.

Things have moved to an 18.5:9 aspect ratio like the Galaxy A8 and other thing are the same like the Full HD+ resolution and Samsung’s preferred SuperAMOLED technology.

It’s tall, colourful, bright when you need it (maxing out at 302cd/m2) and has an always-on feature if you like the idea of getting information and notifications on the display when it’s off.

Overall it’s a decent experience for a phone this cheap and one of the best displays you’ll find at under £300.

This area isn’t particularly exciting but you get an Exynos 7885 octa-core processor. That’s the same one found in the more expensive A8 which is good to see.

You also get a decent, if fairly standard, 4GB of RAM and 64GB of storage. There is a 128GB option but it’s hard to find. Luckily a microSD card slot can take up to 512GB more.

It’s no surprise to see benchmarks very similar to the A8, which is good for the price but if you see how the A7 compared to some non-Samsung rivals it doesn’t do great. It’s outpaced by the G7 Plus which has the same price.

If it’s performance you want at this sort of price, especially gaming, look to the Honor Play.

It might not be a huge surprise to find a Micro-USB port as a cost saving measure, but rivals have USB-C now.
The 3300mAh battery should mean the phone lasts you a day of regular usage.

In our Geekbench 4 battery test the A7 lasted a mediocre five hours and 28 minutes so don’t get too excited on this front.

As we just mentioned, the A7 has the outdated Micro-USB port. However it does have some other things going for it like a headphone jack and some modern wireless hardware including dual-band 11ac Wi-Fi and Bluetooth 5.0.

The latter means better wireless performance and things like the ability to connect two devices to the phone simultaneously.

There’s just a fairly basic downward firing speaker and although you’ll find Dolby Atmos in the settings, this is only for use with headphones.

The Galaxy A7 (2018) comes with Android 8.0 Oreo but you can upgrade it to version 9.0 Pie which is how we’ve been using the phone. It’s the Samsung Experience 9.0 interface so not the One UI you might have seen on the Galaxy S10 range.

Things are pretty standard with a fairly clean layout and the standard things you get in Android like the quick settings menu. Apps are a swipe upwards from the homescreen but if you swipe from below the navigation buttons then you summon Samsung Pay.

Unlike a Pixel, if you swipe to the right from the homescreen you get Bixby instead of Google Assistant. Samsung’s digital helper isn’t as good if you ask us but it’s worth trying out.

There’s little else to say here apart from that the A7 comes with a few pre-loaded apps from Samsung but also Microsoft and, of course, Google.

There are lots of things we like about the Galaxy A7 including the fact you get Samsung design for under £300 with change to spare.

You get one of the best screens on a phone at this price, a side mounted fingerprint scanner and a versatile set of cameras with generally decent performance.

However, there are some downsides that mean you should also consider some rivals like the Moto G7 Plus and Honor Play. Performance isn’t amazing, it’s got a Micro-USB port and mediocre battery life.