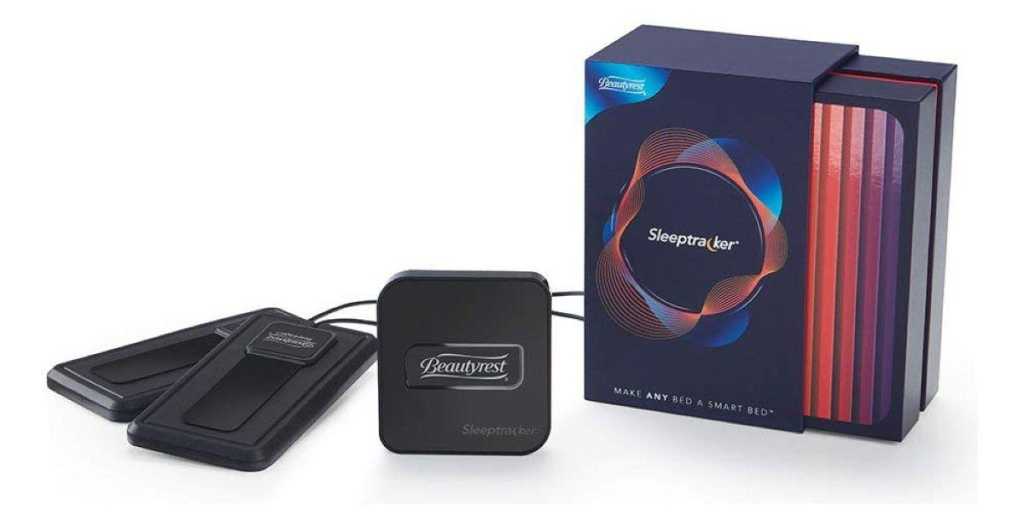 It may be pricier than other sleep trackers in our roundup, but if you’re looking to ditch the wearable but still want in-depth sleep tracking and customised tips to improve the quality of your sleep, the Beautyrest Sleeptracker is the ideal option.

While there are plenty of sleep tracking wearables on the market, we’re of the opinion that if you wear a wearable at night, you’re more aware of it and won’t sleep as well as you normally would. It’s certainly the case for us, anyway! That’s why the Beautyrest Sleeptracker stands out from the crowd; there’s no wearable that you have to attach to your body, you just get into bed and go to sleep as you normally would.

If that sounds like your idea of a dream, then carry on reading to find out more about the stealthy Beautyrest Sleeptracker, a strong candidate for the title of best sleep tracker available right now.

The Beautyrest Sleeptracker isn’t the cheapest sleep tracker on the market, costing $199 in the US, equating to around £185 in the UK. It’s available to buy on Amazon in the UK, while those in the US have a choice between the Beautyrest website, Amazon and other third-party retailers, all selling the tracker for $199.

This makes the Beautyrest Sleeptracker slightly more expensive than the £149/$149 Beddit 3, which offers a similar set of features. Does Beautyrest’s sleep tracker offer enough to tempt consumers away from more established brands like Beddit?

Carry on reading to find out.

The Beautyrest Sleeptracker is comprised of two sensors that sit underneath your mattress constantly collecting data. That data is processed by a small black box that sits next to the bed, which is then sent to your smartphone via the cloud. Aside from the small microUSB-powered processor box that sits near the bed, you’ll be unaware that the sleep tracker is even there.

The Beautyrest is completely undetectable when under the mattress, and the fact that there are two separate sensors that sit beneath the mattress means that you can track two sleepers at once – and that’s not something that many under-mattress sleep trackers offer.

But don’t assume that the stealthy nature of the Beautyrest means that you won’t get access to as many features as wearable trackers. The Beautyrest provides light, deep and REM cycle tracking, body movement and interruptions, and even respiration and heart-rate tracking, giving you a holistic look at the quality of your sleep via the app for iOS and Android.

And, unlike other mattress-based sleep-trackers, the Beautyrest Sleeptracker is smart enough to tell the difference between sitting in bed watching TV and going to sleep. It’s generally quite good at pinpointing the exact moment that we laid down to go to sleep without any prompting, but on the off-chance that it does get it wrong, you can manually adjust the sleep and rise times via the app.

The Beautyrest Sleeptracker is a stealthy tracker that boasts a range of features, there’s no doubt about it, but what do you do with all the info it collects? That’s where the mobile app comes into play.

The Sleeptracker app for iOS and Android is where the sleep tracker really shines. While many sleep trackers on the market present the various information in the form of graphs and charts, there’s no actionable information presented to you to help you improve your quality of sleep.

That’s certainly not the case with the Beautyrest; as well as breaking down your various levels of sleep, heart- and breathing-rates, interruptions and assigning you an overall sleep score, the built-in AI analyses your data and provides meaningful tips to improve your sleep.

These can range greatly depending on how well you sleep, but we’ve seen tips to do with the temperature of the room, specific times to exercise throughout the day and information on how eating and drinking can have a negative effect on overall sleep. Some are fairly self-explanatory, but others are more in-depth and personal – like the AI pointing out that on days where I exercise, I get an extra hour of deep sleep than usual.

That’s possible, in part, thanks to integration with Apple Health on iOS. Using the data collected from other wearables and apps, the Sleeptracker app can get an insight into not only how you slept but how you performed during the day, and the relationship between the two.

You can compare your data to previous days, weeks and months with a tap, giving you an overview of how your sleep has improved or deteriorated over a set amount of time, allowing you to get an idea of what may be affecting the quality of your sleep.

There’s even a smart alarm that uses the sensors to detect when you’re in a light period of sleep close to your ideal wake time and will wake you up gently – it’s certainly a more pleasant experience than the jarring noise of the default iOS alarm tone, that’s for sure.

It may be pricier than other sleep trackers on the market, but if you’re looking to ditch the wearable but still want in-depth sleep tracking and tips to improve sleep, the Beautyrest Sleeptracker is the ideal option. It boasts unique features when compared to similar products on the market, like being able to track two sleepers in the same bed at the same time – ideal for couples – and the personal tips from the built-in AI are both personal and helpful.