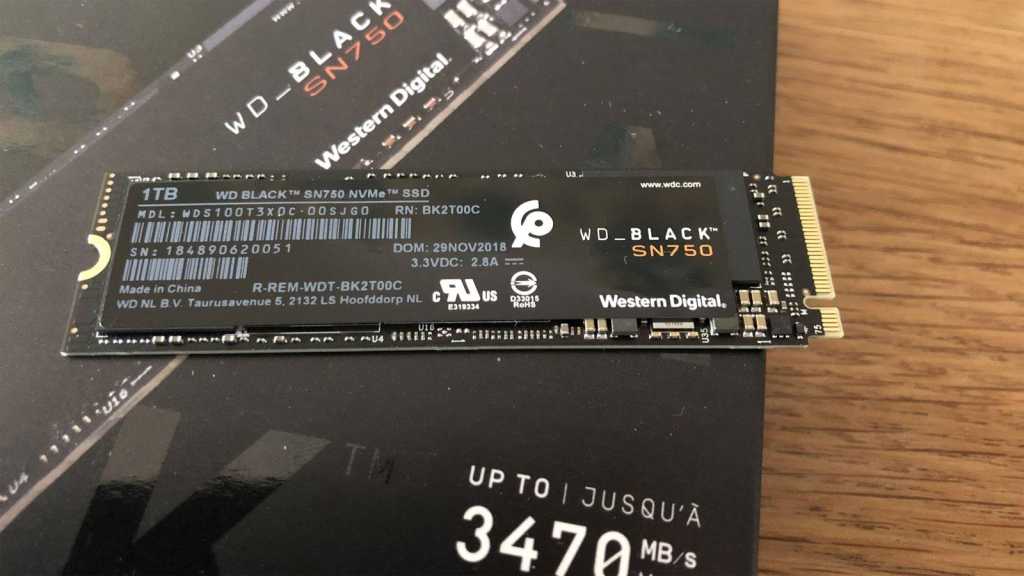 It might be a re-hash of last year’s drive, but firmware tweaks have been able to extract more performance. With the new software dashboard and gaming mode, it’s a great choice if you play games and don’t mind paying a little extra.

WD’s Black series is synonymous with top-notch performance. It has always been a no-brainer choice for gamers, and those for whom performance is the priority.

The SN750 is the latest incarnation of WD’s NVMe SSD and though it could be criticised for using last year’s hardware, firmware and software updates mean it’s still competitive in 2019.

The SN750 is available in four capacities: 250GB, 500GB, 1TB and 2TB. There’s also a choice of ‘with heatsink’ or without. But even at the time of writing, a good six weeks after launch, there’s still no sign of the 2TB being available.

You can’t yet buy one with a heatsink in the UK, but you can order one via Amazon UK which ships from Amazon.com.

If you want the heatsink, either for its aesthetics of its superior cooling, just note that it isn’t something you can buy separately and bolt onto your existing drive.

The prices are aggressive, undercutting the Samsung 970 EVO Plus at all but the 1TB capacity, which is a little more expensive than its rival. However, they’re still more expensive than  Corsair’s MP510 which is currently just £170 from Amazon for the 960GB. In the US, you’ll pay about $239.99.

There’s no difference in warranty: it’s five years whether you go for the WD, Corsair or the Samsung.

As mentioned, the hardware is the same as the 2018 model, so each of the four capacities has a single-sided design that is more compatible with laptops. For PCs, that makes no odds, and it’s likely the major difference is simply the new sticker. It looks better in WD’s photos because it doesn’t have any of the barcodes or text on it, but if you’re installing it into a motherboard slot in a gaming rig with a glass side panel then it will blend into the background nicely with the blacked-out theme.

The EKWB heatsink version looks much better, and has the benefit of cooling the drive sufficiently to allow full performance for three times longer before any throttling occurs. 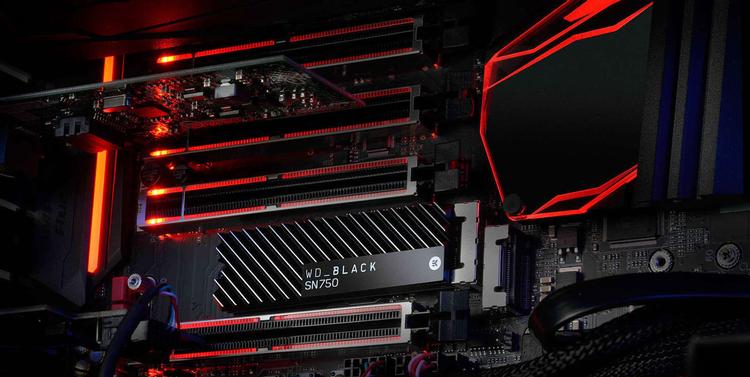 If you’re wondering about the difference between a traditional 2.5in SSD and an NVMe version that fits into an M.2 slot, then you need to understand that there are two possible ways an SSD can communicate with your system: SATA and PCI Express.

The SN750 uses up to four lanes of the latter which means it has a heck of a lot more bandwidth to play with – 8 times to be precise. That’s why it can read and write at over 3GB/sec, but a SATA-connected drive is limited to around 550MB/sec.

With a fast NVMe drive, games and game levels will load faster and you’ll notice that Windows is significantly more responsive in general. Plus, if you deal with large files – usually video – then these can be transferred faster and edited more easily.

WD uses its own custom controller on the drive and says it has tweaked the firmware to squeeze out a few more MB/sec than the 2018 model, giving a headline figure of 3470MB/sec reads. That’s just shy of the 3500 that Samsung claims for the 970 EVO Plus, but WD has also boosted random performance at high queue depths, and the evidence of that was clear in our testing.

Note that the 250GB has the slowest speeds, with 3100MB/sec read and 1600MB/sec write. The 500GB and 1TB models offer 2600- and 3000MB/sec sequential write speeds, and there are slight drops in both maximum read and write speeds on the 2TB model, so unless you need the extra storage space or endurance, the 1TB is the sweet spot.

Talking of endurance, this is a quoted as 200TBW, 300TBW, 600TBW and 1200TBW for the 250GB, 500GB, 1TB and 2TB models respectively. These are TerraBytes Written, so higher-capacity drives will cope with more data being written to them. These are lower than Corsair quotes for the MP510, with the 960GB model offering 1700TBW and the 2TB a gargantuan 3120TBW. 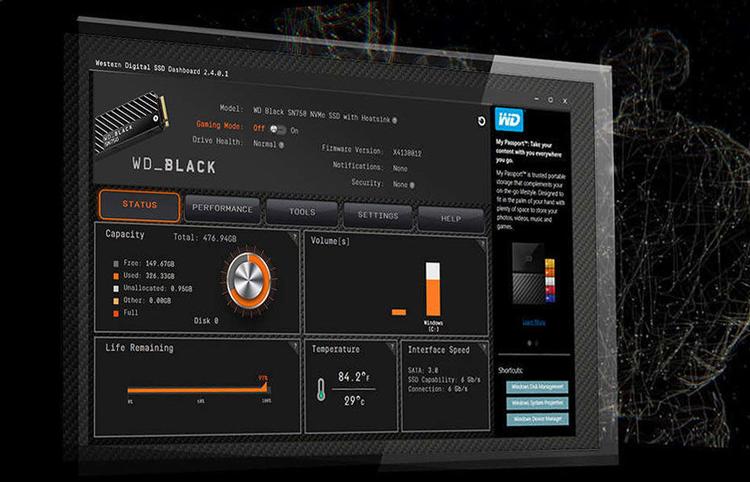 The software dashboard can be used to monitor the drive, as you’d expect, but it also lets you enable the gaming mode. This disables the low-power setting on the drive and ensures you’re always getting maximum performance in those gaming sessions.

The SN750 is an impressive performer. We tested the 1TB model, which offers the fastest sequential read and write speeds in the range.

In Crystal Disk Mark, we saw basically the speeds that WD claims. The slower write speed in the standard test (as opposed to 0fill) is likely down to the fact that the drive was fresh and thereford empty when we tested it. Write speeds generally increase as the drive fills.

A 14GB file transfer took 7.7 seconds (which is seriously impressive if this is your first NVMe drive and you’re upgrading from a SATA SSD) and makes it perfect if you want to edit 4K video.

These speeds mean that the SN750 can match the best of the best.

Enabling game mode didn’t make a noticeable difference in most tests, but we did see a bit of an increase in random write speeds. However, you wouldn’t expect to see an increase – the point of this mode is to prevent the drive from going to idle mode so the full power is available at all times. So the fact that we didn’t see any decrease was – in theory – demonstrating that it was working.

If you’re simply looking for an M.2 drive with top-notch performance, this is certainly one that should be on your shortlist. The heatsink-equipped version costs a fair bit more, but could be worth it if you value aesthetics and better cooling. It’s just a shame the 2TB version still isn’t on sale.

With these performance results, though, the standard version is a great alternative to the 970 EVO Plus. However, if you’re more concerned by value and don’t mind a bit less storage at each equivalent capacity, then go for Corsair’s MP510.