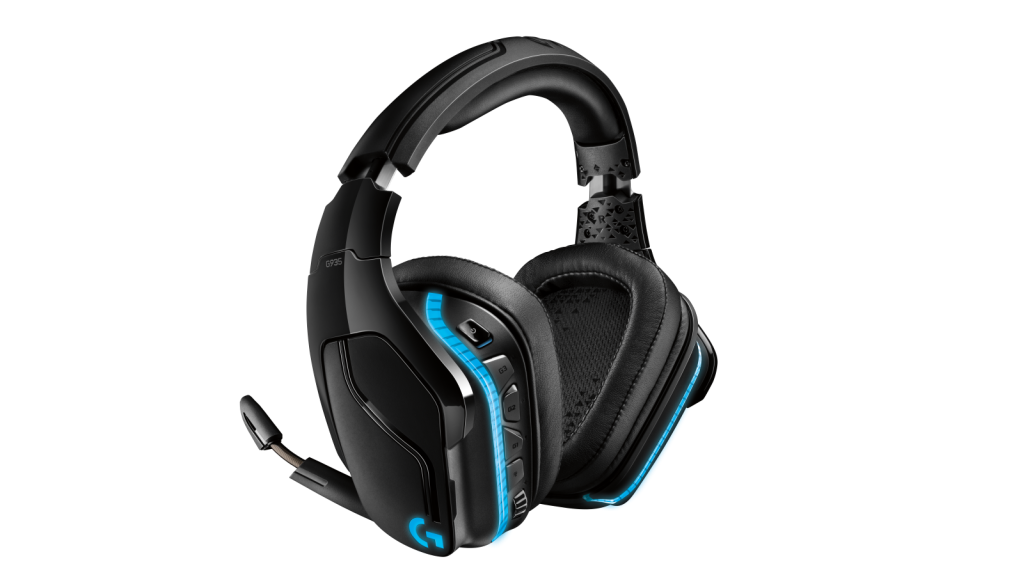 The Logitech G935 offers just about everything you need from a high-end gaming headset; a gorgeous design, impressive comfort and accurate spatial audio to pinpoint the direction of sound, giving you an edge in online gameplay.

Logitech is one of the most popular manufacturers of PC peripherals, and it’s not hard to see why. The company produces high-quality keyboards, mice, headsets, speakers and more that enhance the PC gaming experience. Whether you need a plethora of customisable keys on your keyboard or an RGB-enabled speaker setup, Logitech is the go-to for many PC gamers.

The company’s latest offering comes in the form of the Logitech G935, which sits comfortably at the top of Logitech’s current headset line-up. It boasts impressive audio, wireless capabilities and a high-end design, but is it one of the best gaming headsets on the market? Find out in our Logitech G935 review.

Wait, how much does it cost?

With a number of high-end features, it should come as no surprise that the Logitech G935 is fairly expensive. Although with that being said, the £159.99/$169.99 price tag is actually not that bad when you consider that some headsets (like the Astro A50) can cost upwards of £250/$250 and offers the same set of features as Logitech’s option.

If you’re interested, you can pick up the Logitech G935 gaming headset from Logitech as well as other retailers in the UK including Amazon and Very. Those in the US don’t have quite as many options, but you can still pick it up from the Logitech website.

From the moment you take the G935 headset out of the packaging, it’s clear that it’s a high-end, premium gaming accessory. It features a slick design and is comprised of a blend of metal and soft-touch leatherette to provide that sleek look while still alleviating pressure in the right places. Surprisingly, the use of metallic materials doesn’t weigh the headset down, as the headset comes in at a rather lightweight 379g.

The inclusion of leatherette isn’t the only feature to aid comfort; the G935 also boasts circumaural earcups that are large enough to fit completely around the ears without putting pressure on the soft tissue around your ears, while also providing a decent level of passive noise cancellation. When combined with a click-adjustment system, it’s easy to find the perfect fit and game for hours on end without any aches or pains.

Along the back of the left earcup you’ll find volume controls, a power switch and not one but three customisable buttons. By default, these will change the lighting effects, EQ presets and mute the microphone, but you can customise this via the Logitech G Hub app for Windows 10. 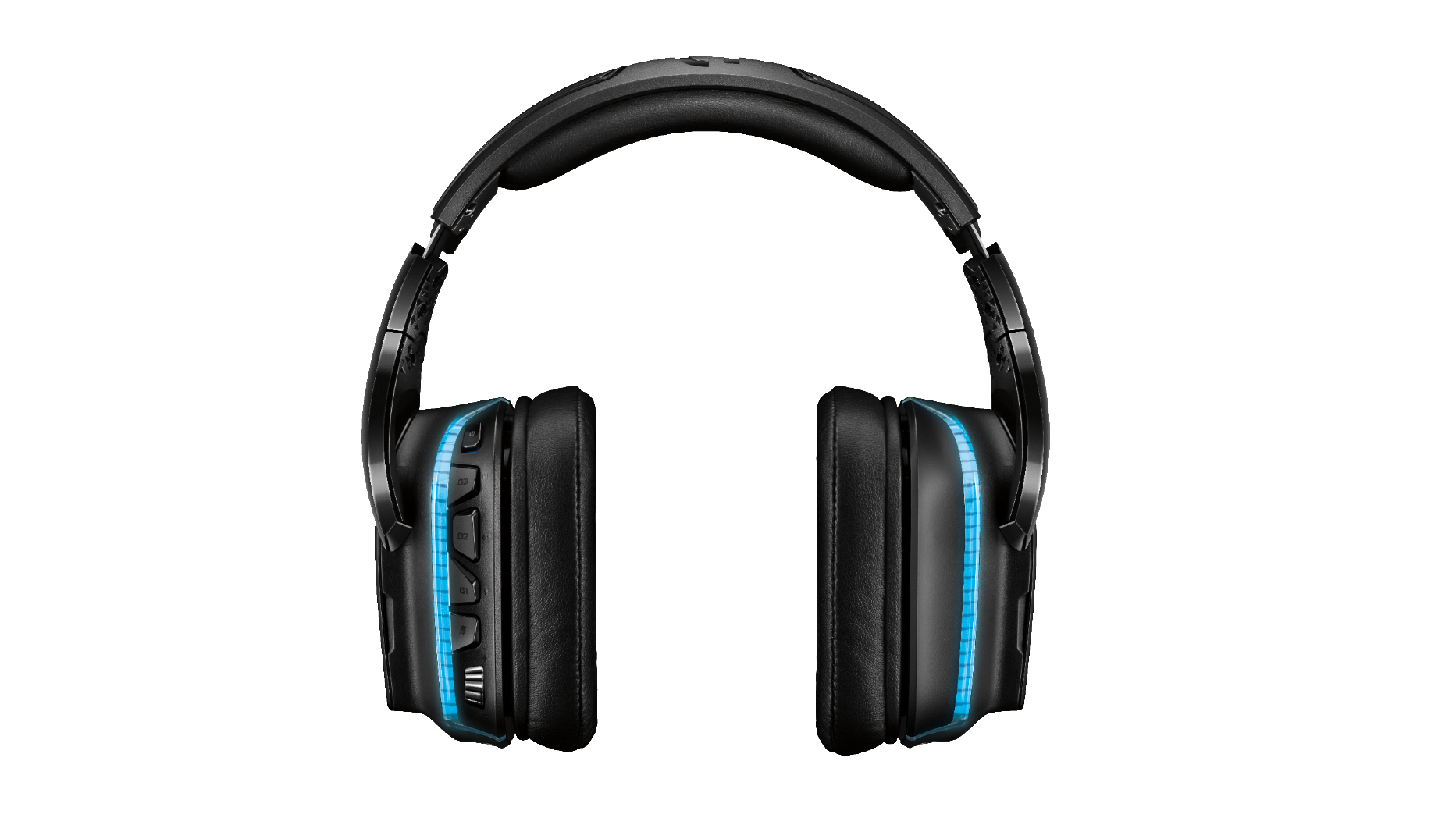 It’s as easy as dragging-and-dropping the macro or function onto the corresponding headset button on the app and hitting save. The best part is that these settings are stored on the headset, meaning you won’t need to download the G Hub app on every PC to access your custom shortcuts and macros.

The G Hub app is where you can also customise the RGB light strips that run down the sides of the gaming headset. There are a handful of effects to choose from, and if you have a range of Lightsync-enabled peripherals, you can sync them all up together. Of course, you won’t be able to appreciate the light show when the headset is on your head, so the appeal is rather limited unless you’re playing in front of an audience.

The G935 wouldn’t be a gaming headset without a dedicated boom mic to communicate clearly with buddies in the heat of online gameplay. The boom mic of the G935 provides clear, crisp audio perfect for communicating (and even basic voiceovers if we’re honest) and also features an LED indicator so you always know when you’re muted. No more accidental slips of the tongue for us! When not in use, the microphone conspicuously folds into the body of the headset and becomes near-on invisible.

The more astute of you may notice that the Logitech G935 doesn’t feature a built-in cable. That’s because the high-end headset utilises 2.4GHz wireless technology, allowing you to ditch the cable for wireless freedom without any kind of lag. The USB receiver can be plugged into any PC, and the best part is that the USB is stored within the headset, behind a removable face plate on the left earcup. We’ve lost many USB transmitters in the past, so this convenient way of storing the dongle is welcomed by us at Tech Advisor.

You’ll get around 12 hours of battery on a single charge with RGB lighting disabled, or eight hours with the light show enabled. Thankfully you can continue to use the headset when the battery dies as the headset also supports both microUSB and standard 3.5mm headphone jack connectivity.

The Logitech G935 doesn’t just boast a high-end design; the quality of the audio is up there too. Logitech’s latest headset features upgraded Pro-G 50mm drivers that, like the Logi G Pro headset, are constructed from hybrid woven mesh with the aim of improving clarity at both low and high volume.

That aim has been achieved; no matter the volume, we are yet to experience even a hint of distortion during our gaming sessions. The bass is heavy and booming, perfect for explosions and gunshots, while high frequencies like footsteps and the clink of used ammo shells hitting the ground are clean and crisp.

And like with other aspects of the headset, the EQ of the headset can be tweaked at any time via the G Hub app, giving you the best performance whether you’re gaming, listening to music or watching a movie.

The audio experience is further enhanced by DTS Headphone: X 2.0 support. The 7.1 surround sound enabled by the tech provides precise and accurate in-game spatial awareness, allowing you to accurately pinpoint sounds in a 3D soundscape. While it may not be needed for all games, it can certainly give you an edge when playing competitive shooters like PUBG, Apex: Legends and Call of Duty: Black Ops 4.

In essence, unrivalled sound accuracy and quality make the Logitech G935 stand out from a sea of gaming headsets.

The variety of connection methods on the G935 mean that it’s compatible with virtually every console on the market, as well as PC. The catch is that you can’t use the USB receiver on consoles, so you’ll have to use the included 3.5mm headphone cable if you want to use the headset with your PS4, Xbox One or Nintendo Switch.

The wired experience isn’t quite as premium as the wireless experience on PC, but at least you don’t need to fork out for multiple headsets!

The Logitech G935 offers just about everything you need from a high-end gaming headset; it offers a gorgeous design that when combined with premium materials offers impressive comfort, even over long gaming sessions. The customisable buttons are a plus, allowing you to program macros or just about anything else and activate them on-the-fly, and the RGB lighting is bound to impress some.

But while it boasts a great design, the G935 truly excels in the audio department. Bass is booming, highs are crisp and clear, and the soundscape is impressive, allowing you to pinpoint the source of audio with incredible accuracy.

Oh, and the compatibility with just about every console alongside PC is a bonus too.